Take a virtual tour of the Volume exhibition here.

Putting together an exhibition that encompasses the whole of New Zealand music while appealing both to the general public and the people who are much closer to the source – musicians, songwriters, journalists, industry-types and just hard-core fans – was never going to be an easy, or even an attainable goal. Kudos to the folk at the Auckland Museum for taking the time, interest and care in setting up this exhibition. It could have been a thankless task, trying to cover everything, appeal to everyone and in fact achieving nothing.

Experiencing an exhibition like this, when so much is subjective and based on one’s emotional connection to the material, will be very personal, so it seems only right to explain my own perspective before carrying on.

I moved to New Zealand from the US in 1994 at the age of 39, with my main knowledge of the country’s music being Split Enz, Crowded House and the Flying Nun label. I was up on Straitjacket Fits and Chris Knox and not much else.

Since then, I’ve become immersed in the local music scene, writing about it in magazines and talking about it on the radio regularly. My opinion about New Zealand music is that it didn’t really show its “true colours” till the late 1970s when the punk movement made way for New Zealanders to find their own voice instead of aping those from the UK, Australia and the US.

But enough about me, let’s get to Volume. 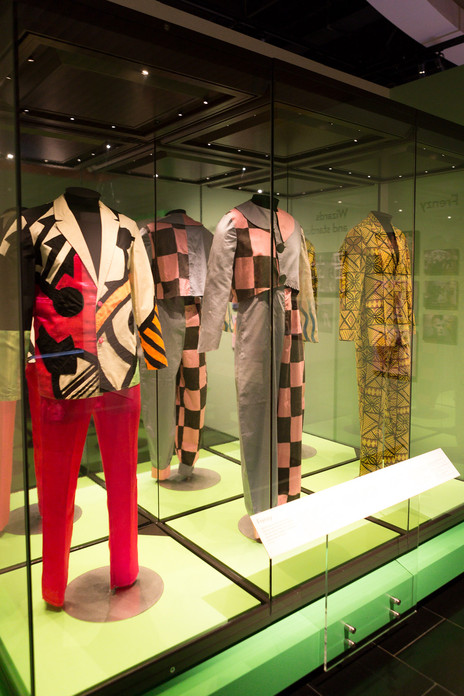 Upon entering I was handed an All Access pass: a swipe card to hang around my neck and collect digital data that I would later be able to access on my own computer. Being the age that I am, I was immediately suspect of this new-fangled technology, but ultimately I found it a worthwhile addition to the physical experience. I collected various playlists, photos, etc,  along the way; the process was very simple, and access to the data later was easy and fun.

I entered the exhibition to the strains of The Fourmyula’s ‘Nature’ and then Lorde’s ‘Royals’. Most fitting. The layout starts roughly in the present and works its way back to the 1950s, with a few detours along the way. One of the first exhibits to catch my attention was one of the most emotionally direct: a glass case with six sheets of hand-written lyrics dangling from invisible wires, as if floating in space. The lyrics were by Anika Moa, for her song, ‘My Old Man’. Immediately one is confronted with the very real process of what it takes to create music. Reading the drafts, and seeing how much work Moa put into her craft, made a powerful and personal connection between the viewer and the artist. 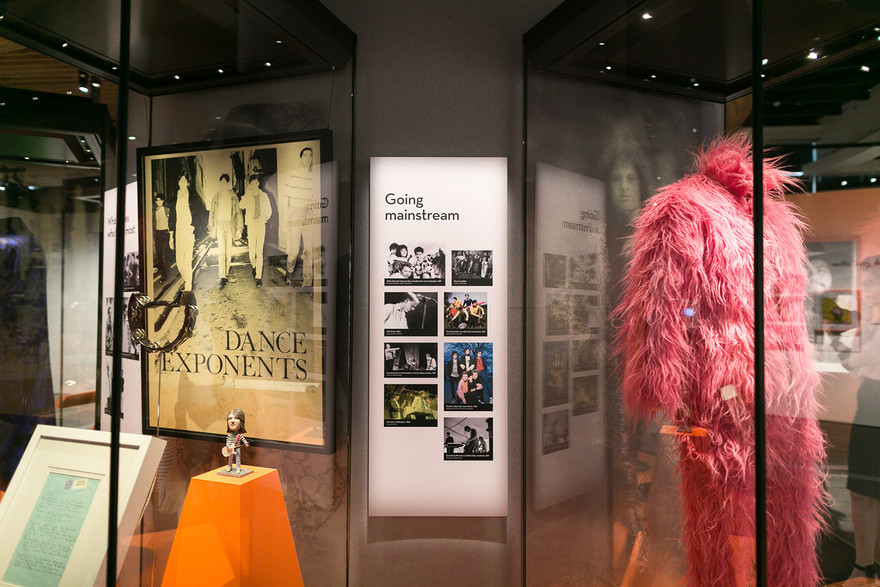 Displays from the 1980s for Dance Exponents and, at right, Andrew Fagan’s pink fake-fur suit from The Mockers

Nearby, a display touts the role that modern indie labels have had in the shaping of what we know as New Zealand music: labels such as Propeller, Pagan, Wildside, Dawn Raid, Lil’ Chief, Loop and, of course, Flying Nun. The efforts of label owners such as Simon Grigg, Roger Shepherd, Trevor Reekie and Murray Cammick cannot be overemphasised. These are music fans who put their own time and money into ventures that had every expectation to fail, at least commercially, but did it anyway. Chances are, much of the music we love today wouldn’t have been heard without them.

Next is what a museum exhibition can do best: bring us face to face with objects and artefacts we never thought we’d see. In this case, Lorde’s Grammy Award for ‘Royals’,  along with the outfit she wore on the internationally televised programme, including her school uniform shoes. 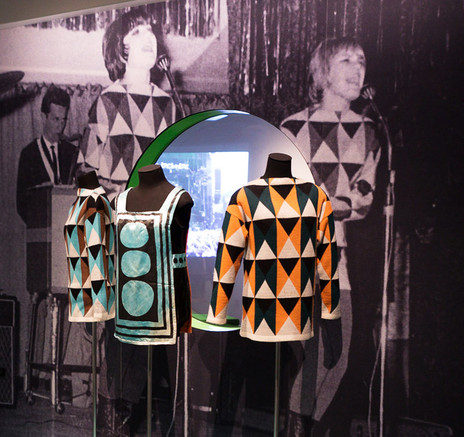 The famous outfits worn by The Chicks,  Judy and Suzanne Donaldson, 1960s.

For me, these displays were the most thrilling. I loved seeing Chris Knox’s 4-track TEAC reel-to-reel recorder on which so many great Flying Nun records were recorded ,and the clothing was amazing. In addition to being in such close approximation to Noel Crombie’s legendary Split Enz costumes, there were outfits from 60s girl-group The Chicks, and a truly stunning pink-fur suit worn by Andrew Fagan while fronting The Mockers. Other highlights include Martin Phillipps’ leather jacket, Dalvanius Prime’s fedora and Chris Knox’s Ovation Breadwinner electric guitar.

The interactive areas are another feature of the exhibition. Again, like the All Access pass, I was a bit suspicious of these potential gimmicks. Although being given the chance to remix a Che Fu track – while a pre-recorded DJ Sir-Vere gives instruction and encouragement – seems a bit gimmicky, it does help to bring you closer to the music. Other, less engaging interactive activities include the opportunity to “Be a DJ”, and another to compare sound quality between vinyl, CD and MP3.

I’m a bit ashamed to say that the interactive area I enjoyed the most was the “rock club” where you’re allowed to pick up a bass guitar, stand behind a keyboard, sit on a drum stool or strap on an electric guitar and play along to Dragon’s ‘Rain’. The instruments light up to help you play the correct notes, but even so, what I did to that electric guitar should not be heard by man or beast.

The curators of the museum have done an admirable job of representing just about all forms of New Zealand popular music, from metal to electronica to hip-hop to country. 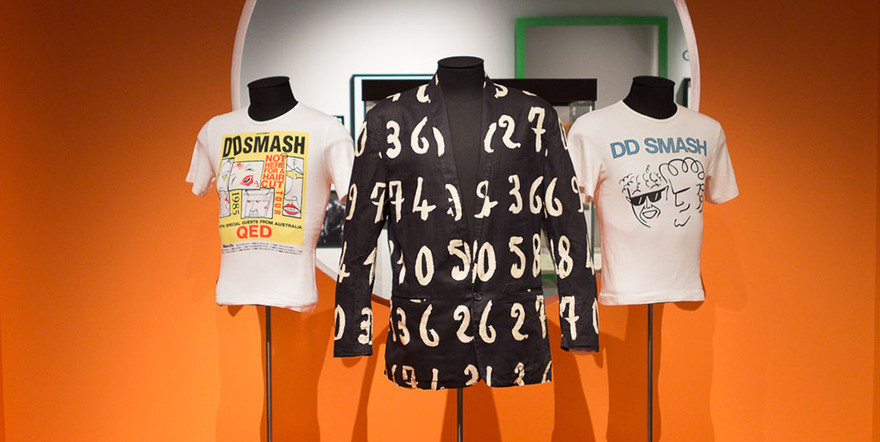 Jacket worn by Dave Dobbyn, late 1980s. The t-shirt on the left Dobbyn designed himself for a DD Smash tour in 1985.

Throughout the exhibit there are opportunities to pick up a set of headphones and watch vintage music videos: another excellent way to re-engage with the music. I loved seeing videos from the 1990s when I first arrived in New Zealand, such as those by Supergroove and Darcy Clay. Let’s face it, nostalgia is a big component of what this is all about. My only complaint here is that the music being piped into the headphones wasn’t very loud. This was especially annoying while trying to listen to “Noisyland” recordings by the likes of The Gordons.

As the exhibit winds back through the 1970s and 1960s there are more and more actual records and posters on display: original copies of the ‘Nature’ single and Ray Columbus’ Loxene Golden Disc, along with plenty of very cool ephemera from the punk era: a Zwines membership card, a poster for The Enemy’s first gig, and bFM collector cards.

I realise that these days music is often not delivered in physical form, but I would have liked to have seen a few more records, tapes and CDs from the 80s, 90s and 2000s.

But these are minor gripes. On the whole the folk at Auckland Museum have done a wonderful job with this exhibition. I spent about an hour and a half going through it and I could have easily doubled that. When I left, I really felt as if I have experienced a thorough overview of what New Zealand popular music is all about, beginning with Johnny Cooper’s ‘Pie Cart Rock & Roll’ (an original 78rpm disc was on display), up to Lorde’s ascension to the world stage. Well done! 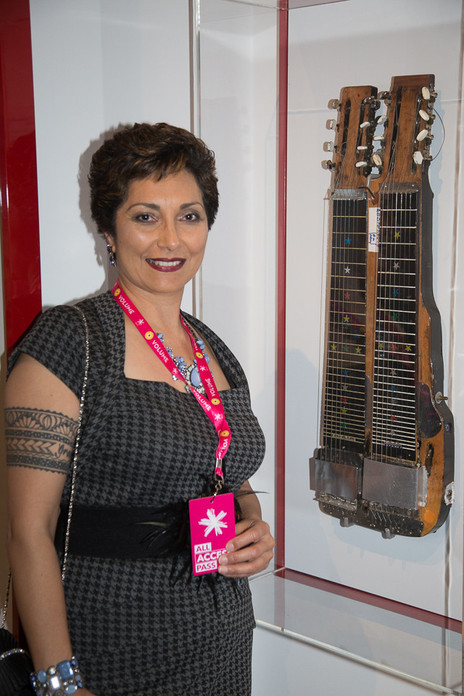 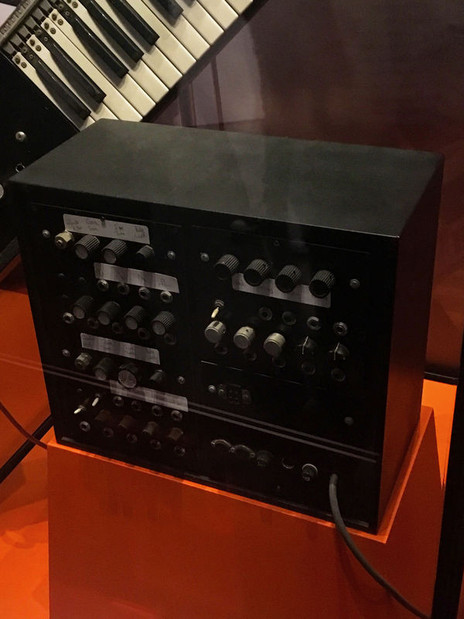 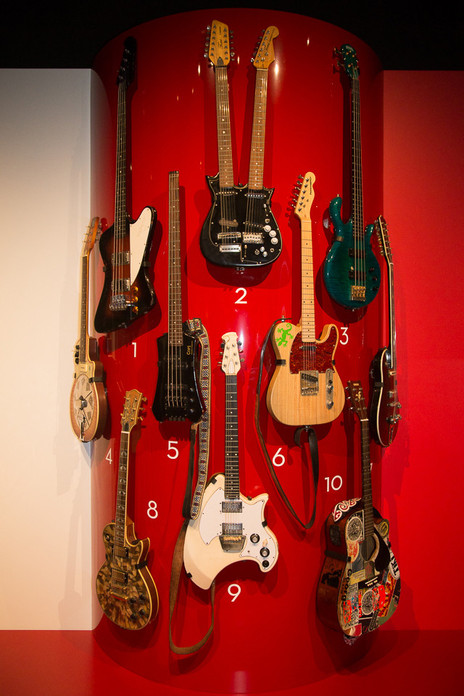 Ten guitars at the Volume exhibition, including Chris Knox's Ovation Breadwinner (No.9). - Photo by Jackson Perry/Capture 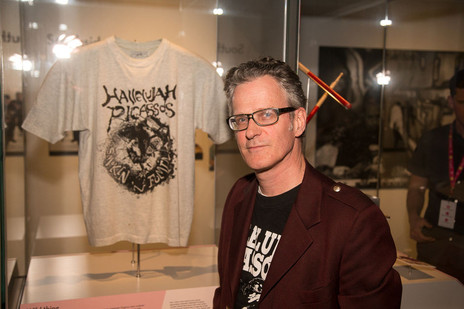 Peter McLennan, guitarist with Hallelujah Picassos, standing next to a display devoted to his band. - Photo by Jackson Perry/Capture