The dark end of the lane

I once wrote about Zwines in a magazine called Extra, an offshoot from Rip It Up magazine which lasted two issues over a few short months in 1980-81. In the piece I attempted to explain what Zwines was, building the story around the bands that played there. About a decade back I tried to expand on that somewhat, using some of the images available and the original band profiles from that August 1980 Xtra piece. It was partially successful but it was still hard to illustrate exactly what that grimy little place – one I described as either "heaven or hell depending on who you were and how far you were willing to push yourself" – was in words.

Zwines was a nightclub, but was unlike any other nightclub I've ever walked into. For about a year, it was the spiritual and physical home of the Auckland punk scene – a scene that nurtured, sometimes violently, an extraordinary hothouse of raw creative talent. Its influence still resounds, albeit increasingly indirectly.

A few months back we were given a disc of 80 photographs of the Zwines scene featuring some of the people who inhabited it. They were taken long before the so-called AK79 scene (often wrongly assumed to be the original Auckland punk scene) existed, and are mostly centred around the fabulous (the word is very appropriate) and absolutely individual The Idle Idols.

The Idle Idols were conceived by Auckland artist Paul Gibbs, the only male in the group. He gathered around him some of the most extroverted young women in a scene known for its extroversion. Could they play? It didn't matter – it was about the look and the concept and on both those levels they pulled it off with absolute panache and were never less than fantastic. Leonie Batchelor, the bassist, was about the closest thing they got to an accomplished musician - her boyfriend Mike Caen was in Hammond Gamble's Street Talk, although they'd all spent some time practising.

The photographer is Fiona Clark but they came to us via Paul Gibbs who gave them to AudioCulture writer Andrew Schmidt. We've done nothing to these at all — no touch-ups, no colour tweaks, they are as they arrived. It was June 1978, and Zwines was at its peak.

Fiona Clark, whose website is is here, has given us permission to exhibit these amazing images at AudioCulture.

Zwines and The Idle Idols 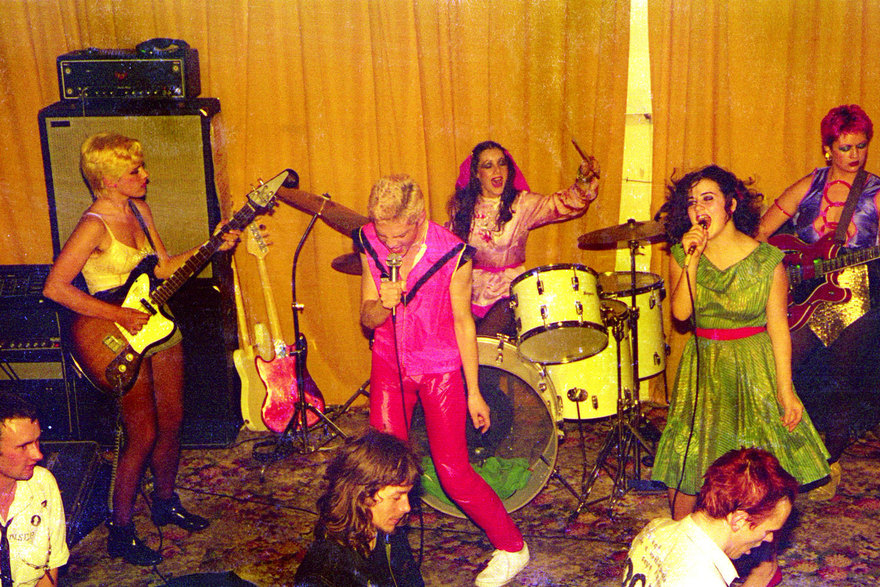 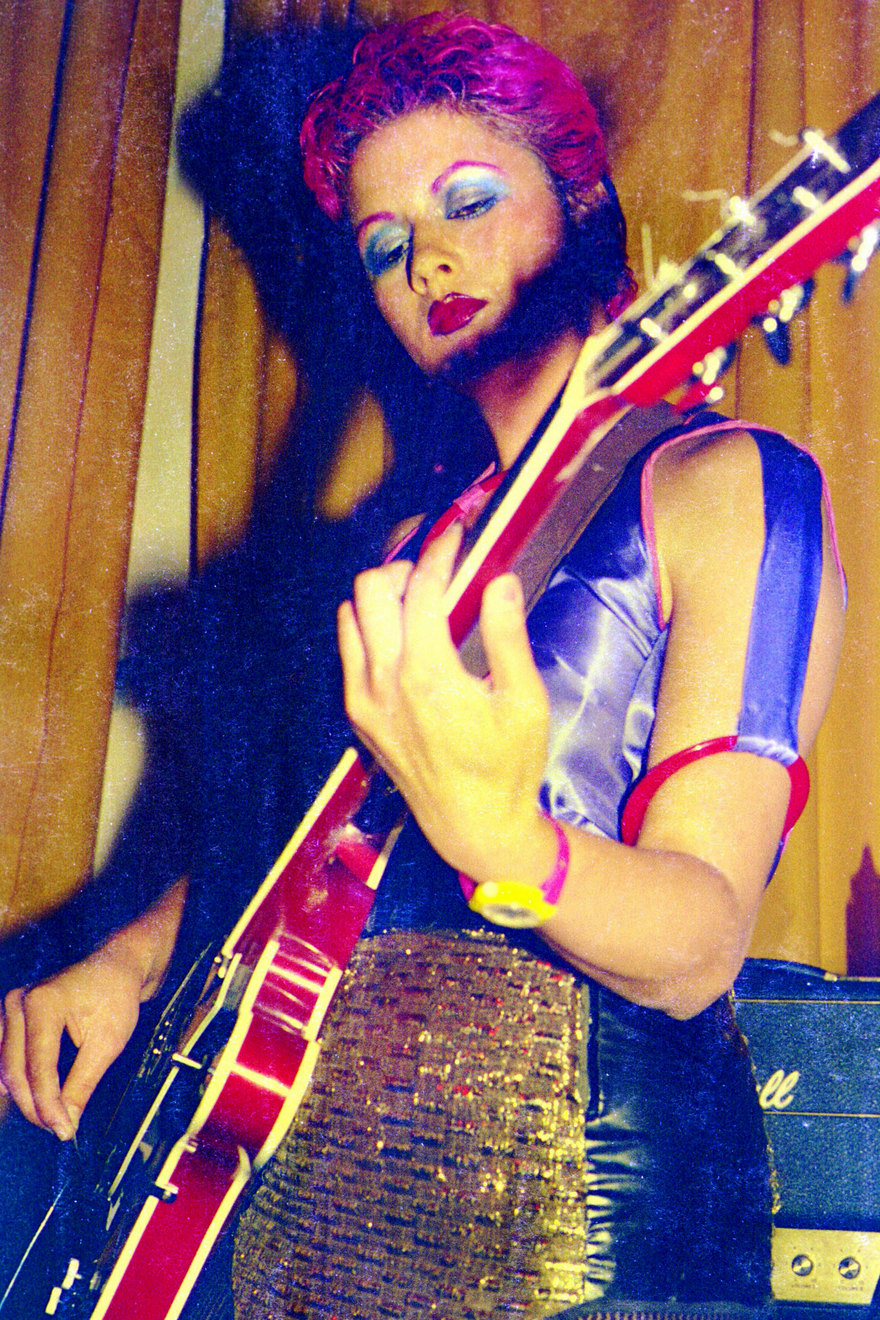 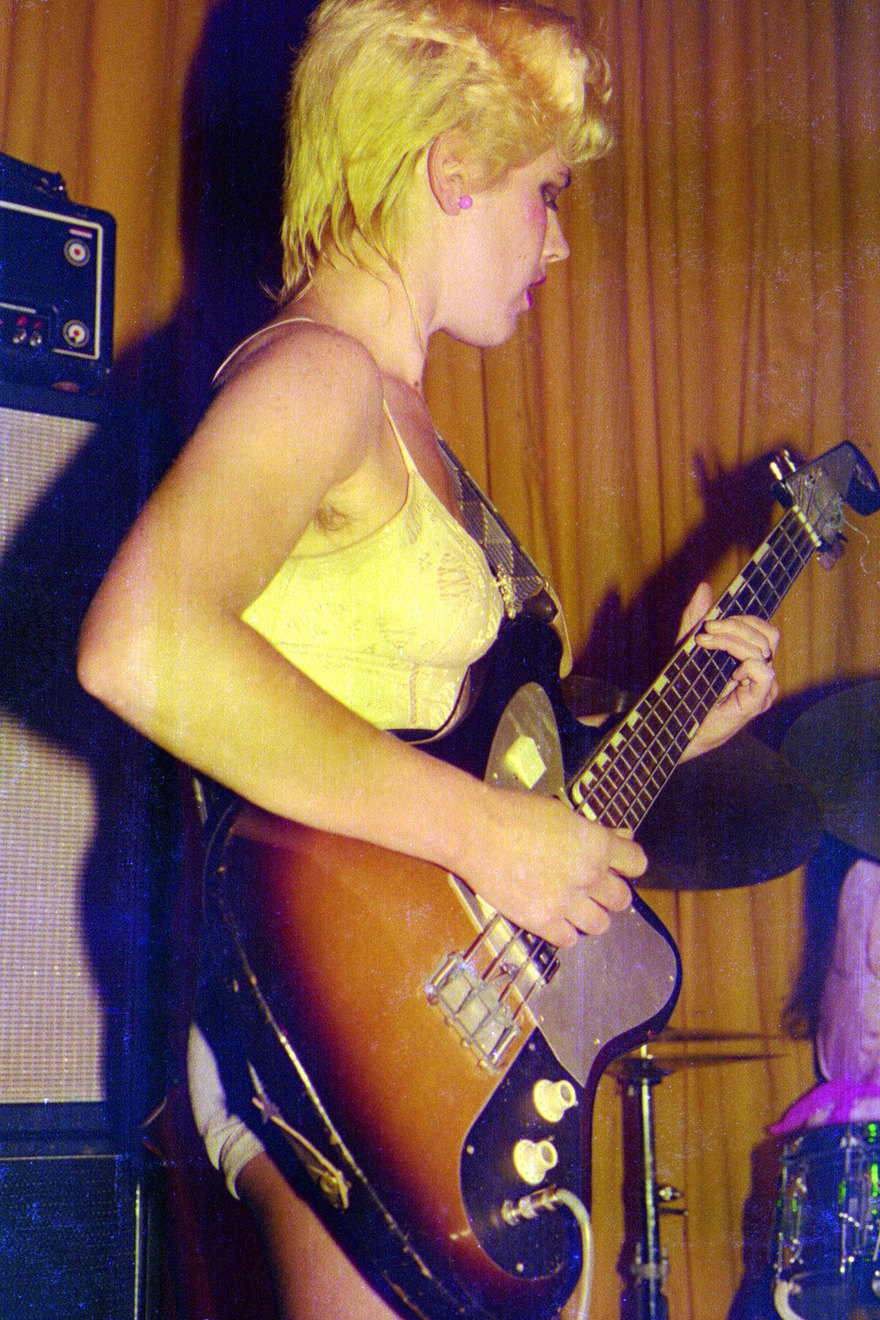 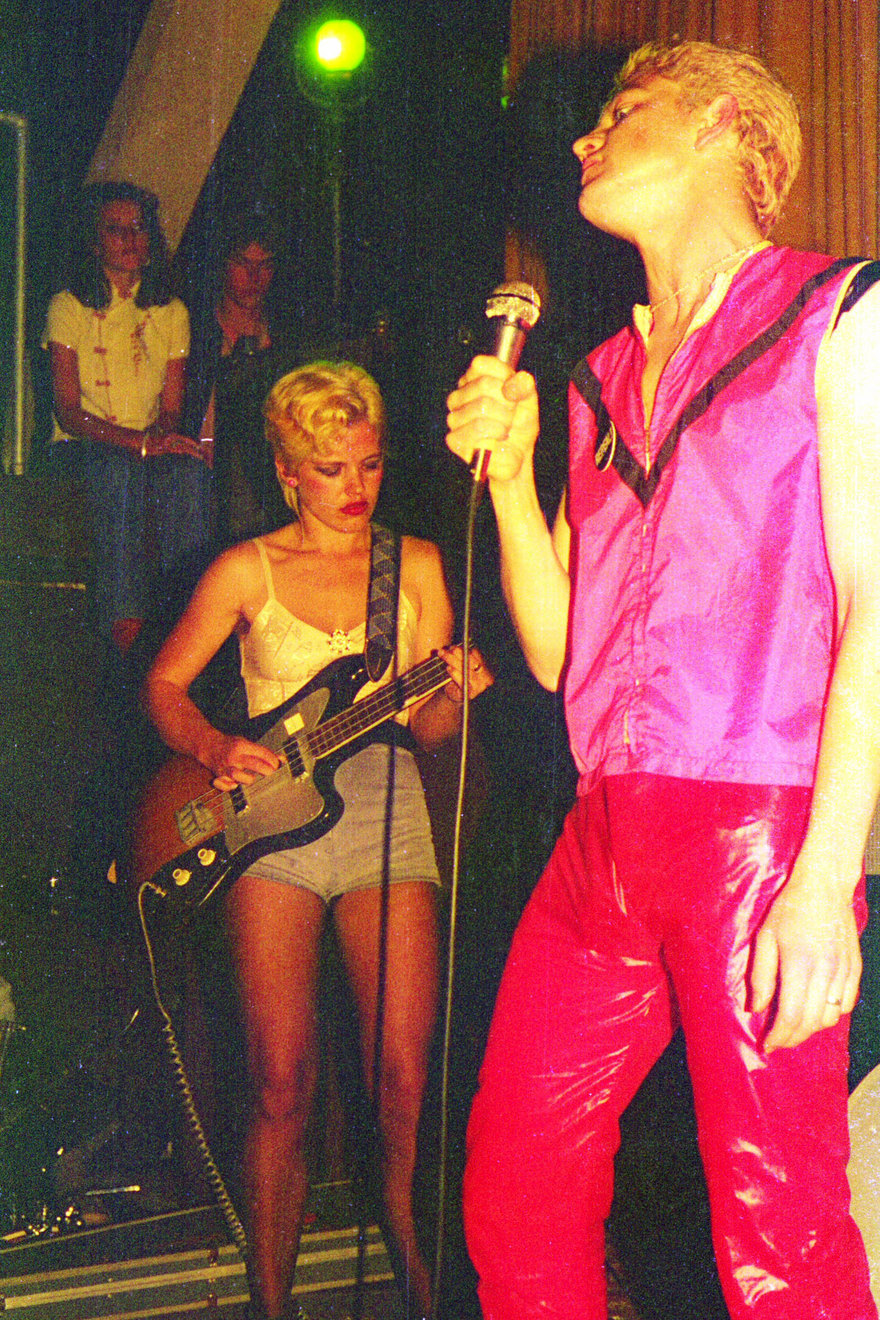 Leonie Batchelor and Paul Gibbs, The Idle Idols. Paul now lives in the UK, Leonie in Australia. Many of the Auckland punk scene left the country in the early 1980s. 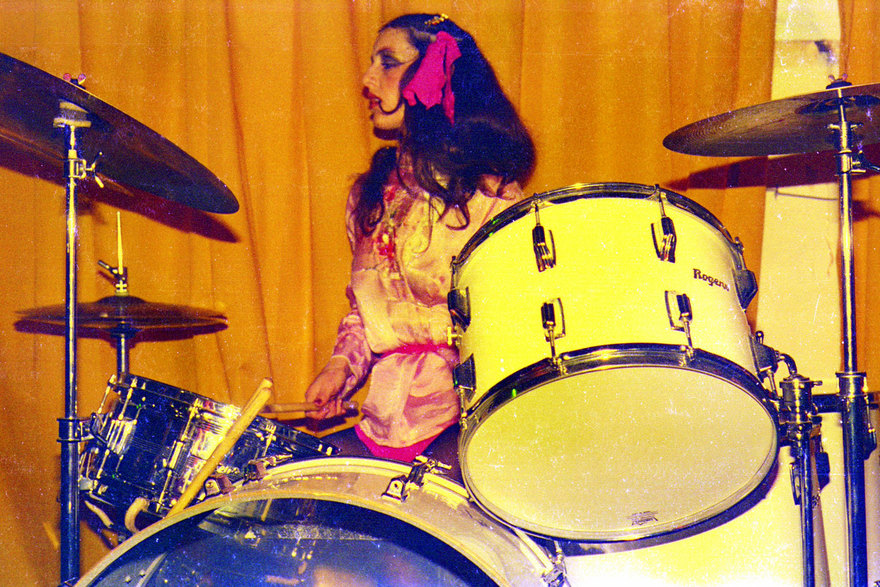 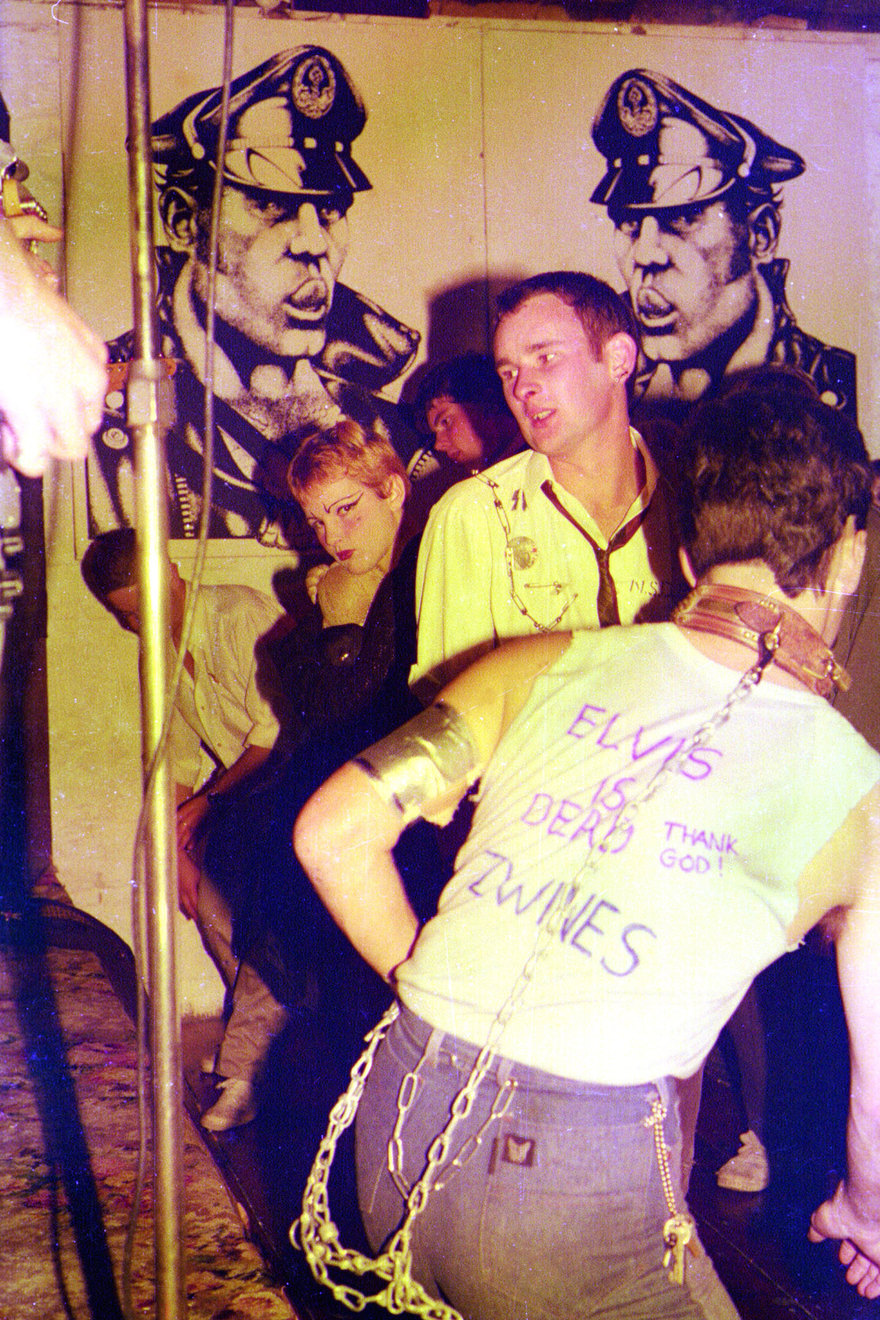 In the centre, Lindsay Page. In the front, Craig, the vocalist with The Aliens. Behind Gail Young, now a designer in Paris. 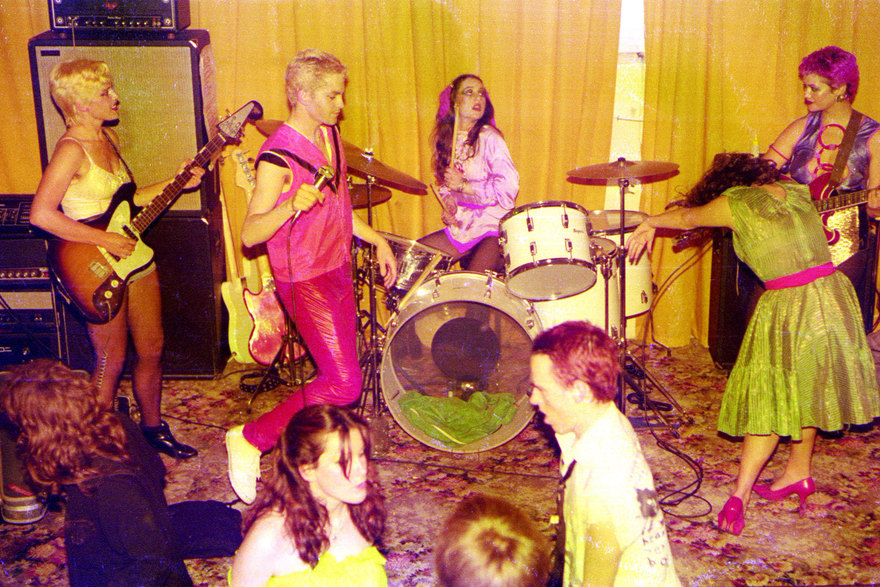 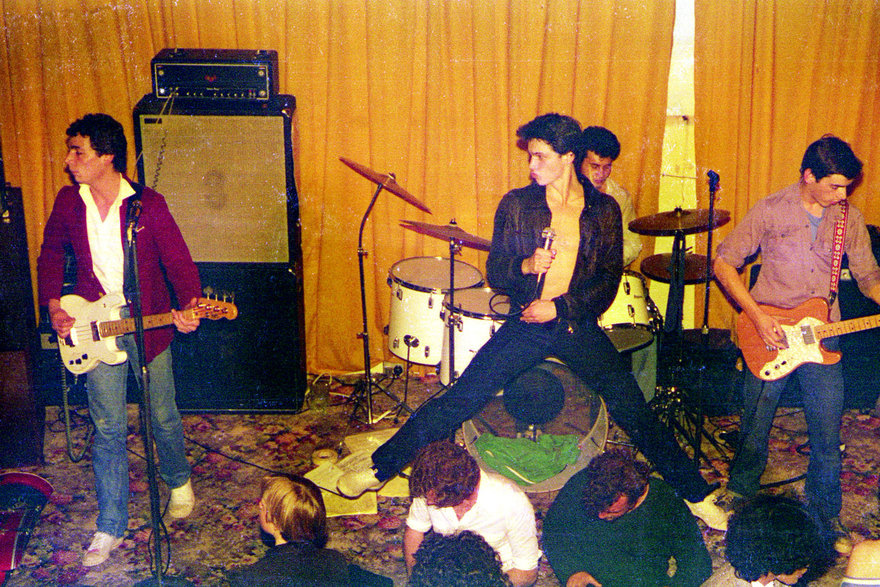 Sheerlux - Roland Killeen (later a producer and engineer at Mandrill Studios), Marlon Hart (formely Mal Icious in The Scavengers), Graeme Schnell, and Jimmy Juricevich (later of Techtones). At the time this was taken the band had just changed their name from The Stimulators. 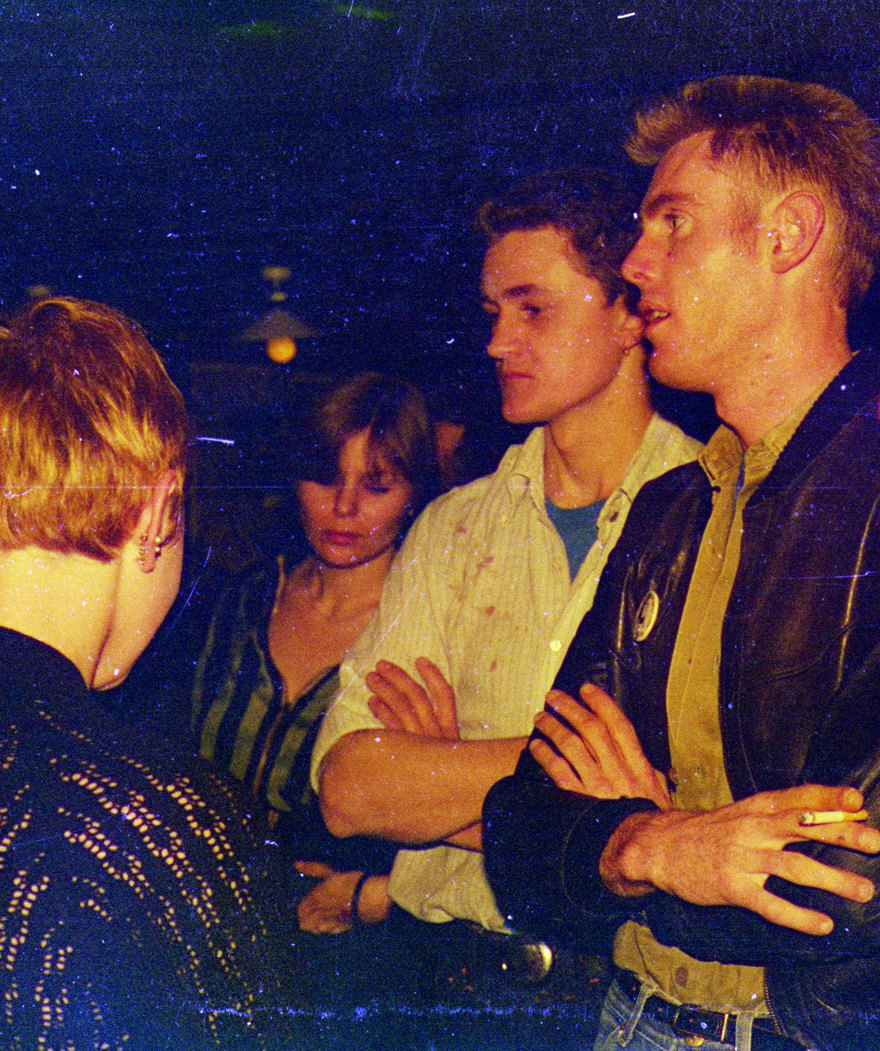 Spike Bastard and Bones Hillman from The Assassins. Both were former members of The Masochists who had played Auckland's first major punk gig in June 1977 with the the Suburban Reptiles and The Scavengers. Bones was also briefly a member of the Reptiles. The Assassins would mutate into The Rednecks and Bones would later be a member of The Swingers, then Midnight Oil and is now a leading session player in the US and Australia. 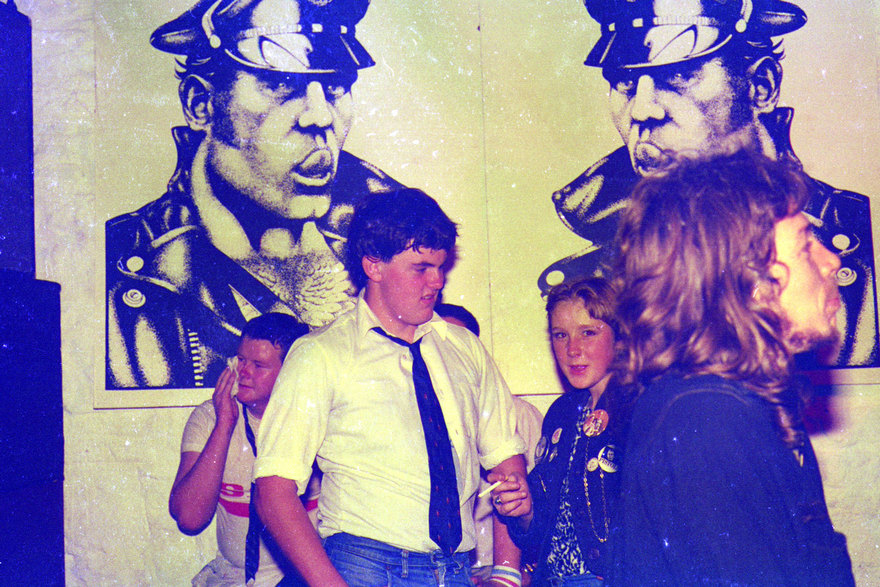 John No-One from Rooter behind Pete Adams and Kathy Haley (both now sadly deceased). On the right, and clearly not 'punk', although he was a regular at the venue, is Auckland pianist Francis Taylor. 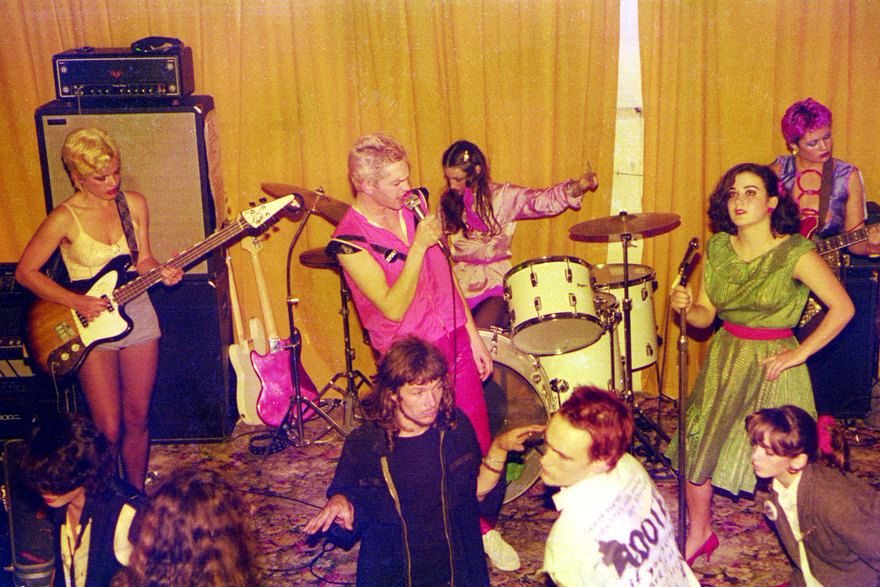 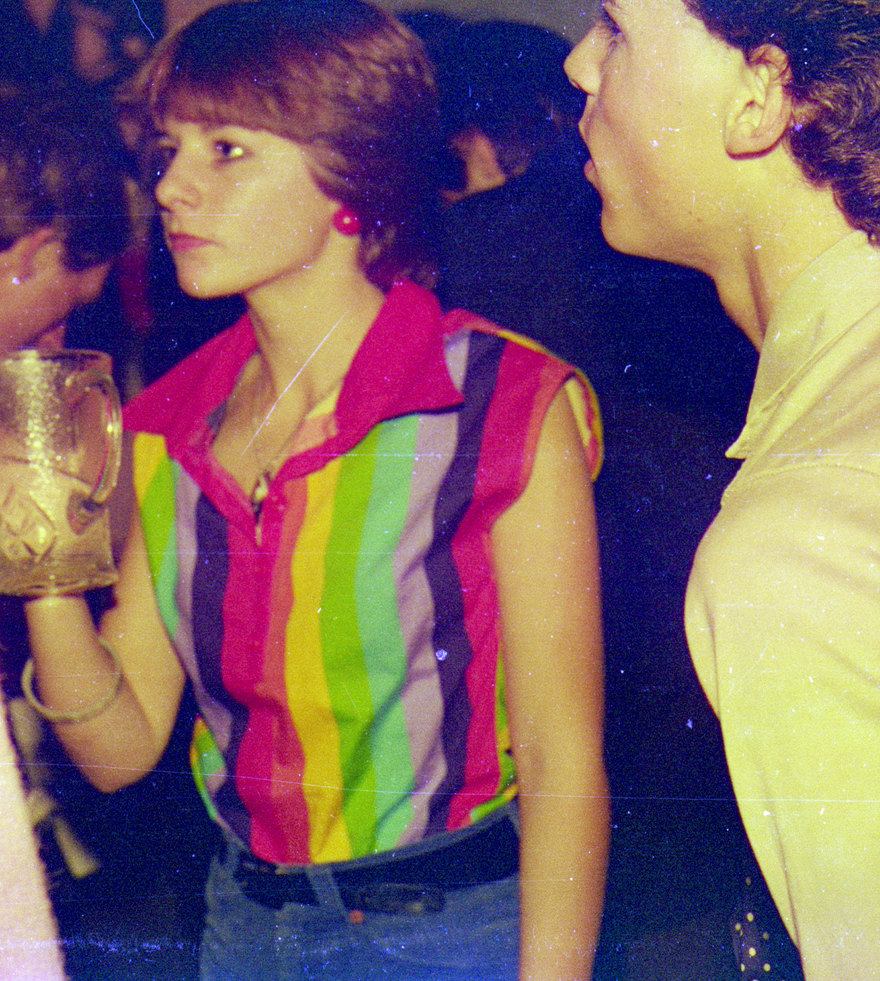 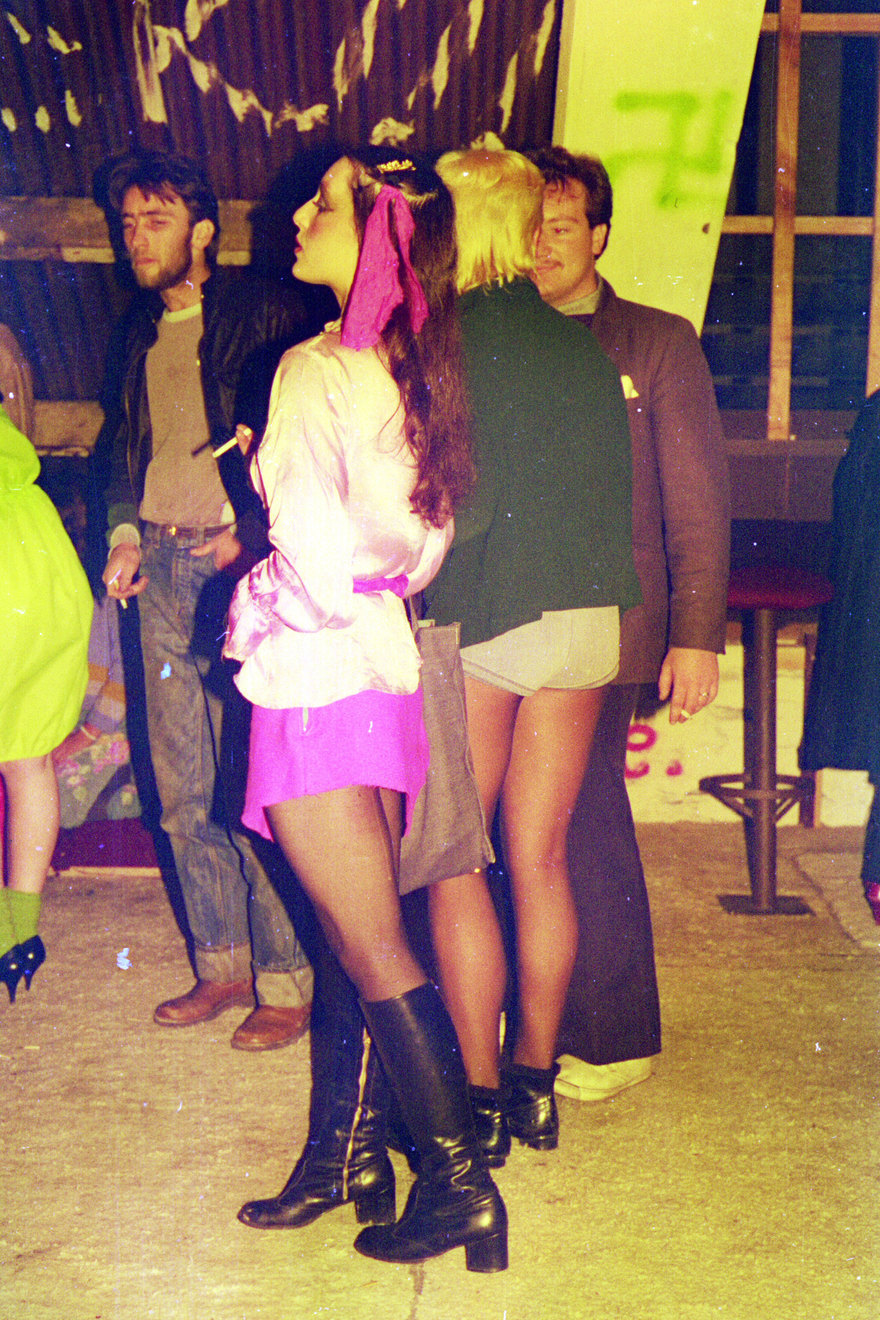 Kev Grey (left) — at the time this was taken he was not in a band but he had been the lead singer with the fearsomely good Masochists, one of the original trio of Auckland punk bands. In the front, Shona Bruce from the Idle Idols. Taken upstairs at Zwines. 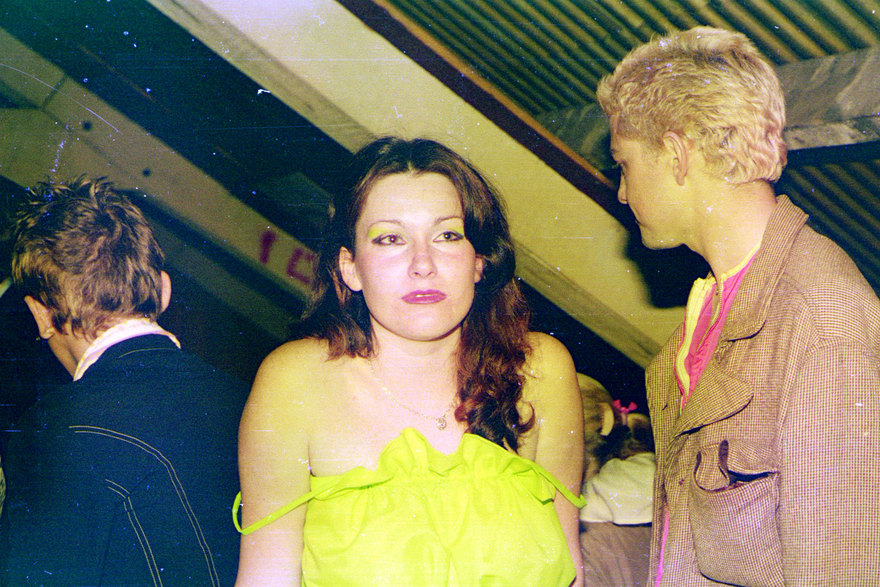 Fiona McLeod and Paul (Idle Idols) Gibbs upstairs at Zwines. The person with their back to the camera is perhaps John Atrocity, later of Proud Scum. 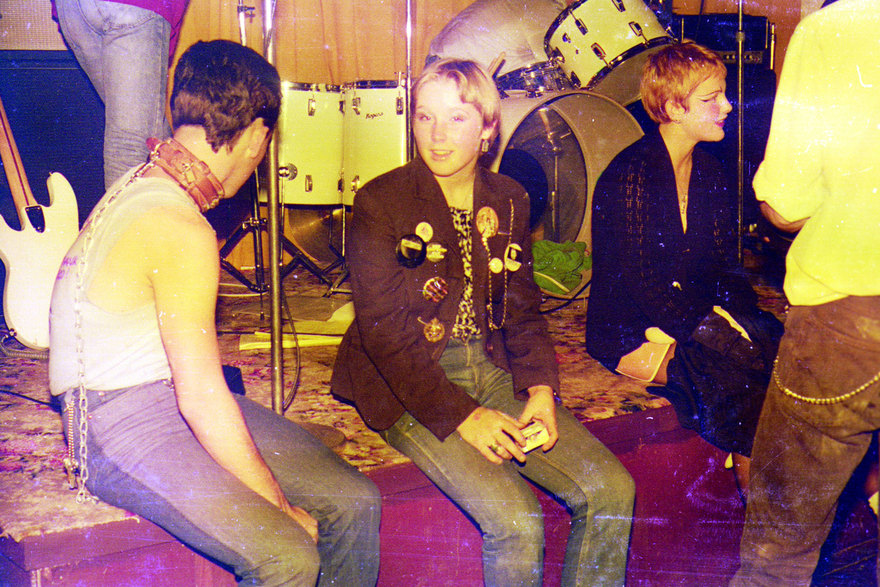 Craig from The Aliens, Kathy Haley, and friends sitting on the stage at Zwines. It was part of the ritual at Auckland punk gigs for members of the crowd to sit on the stage looking away from the band. 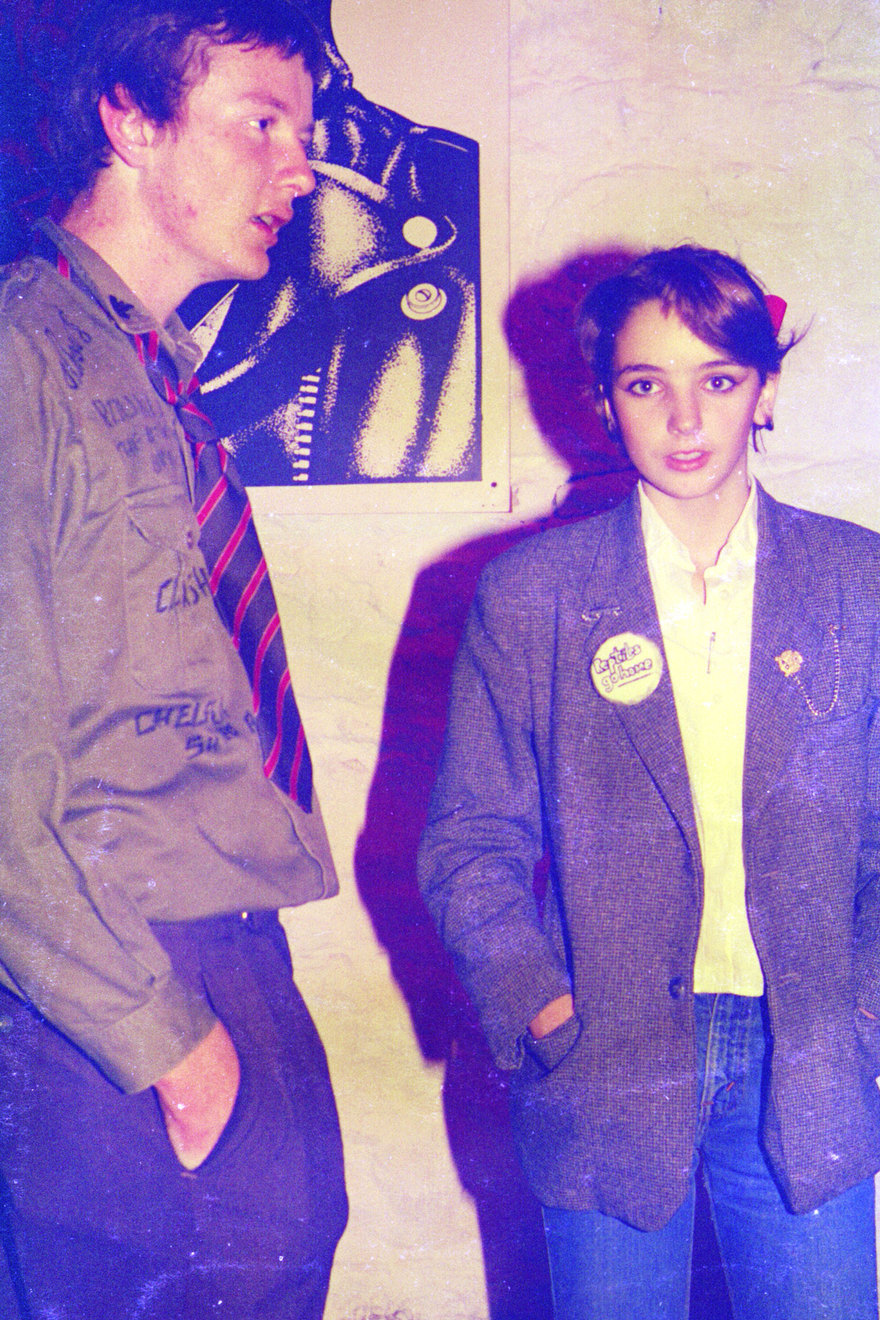 On the left, Wayne Hunter (his brother John was John No-One, the singer with Rooter and The Terrorways). On the right, Josephine Griffiths, Jonathan Jamrag's sister. Note the anti-Suburban Reptiles badge - there was a quite a divide between the arty Suburban Reptiles and the younger Zwines crowd by this time. 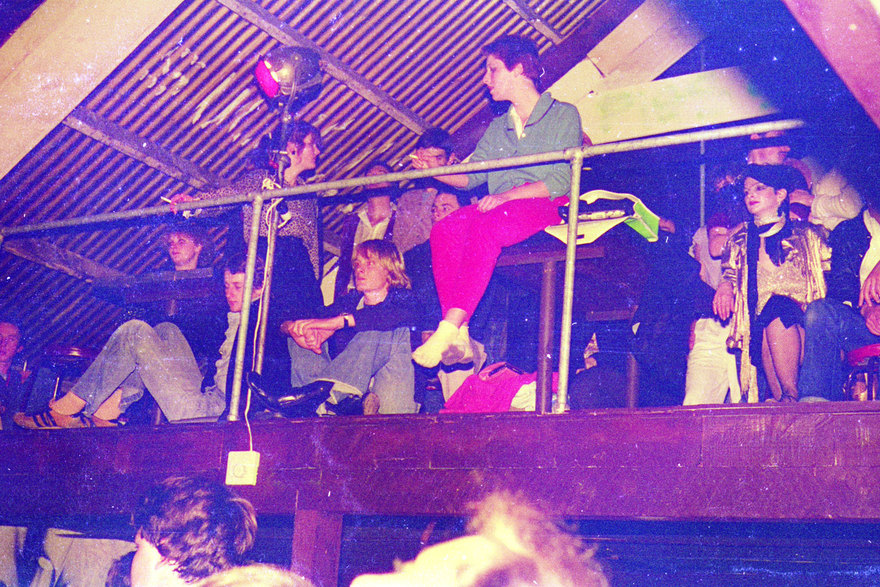 Upstairs at Zwines. In amongst the crowd is Linda Niccol (hand on rail), now a writer on the Kapiti Coast, and Jewel Sanyo (sitting on right, a Rip It Up writer and publicist). Wendy Zed is on the table and Paul Woodruffe is sitting in front of her (in the black boots). 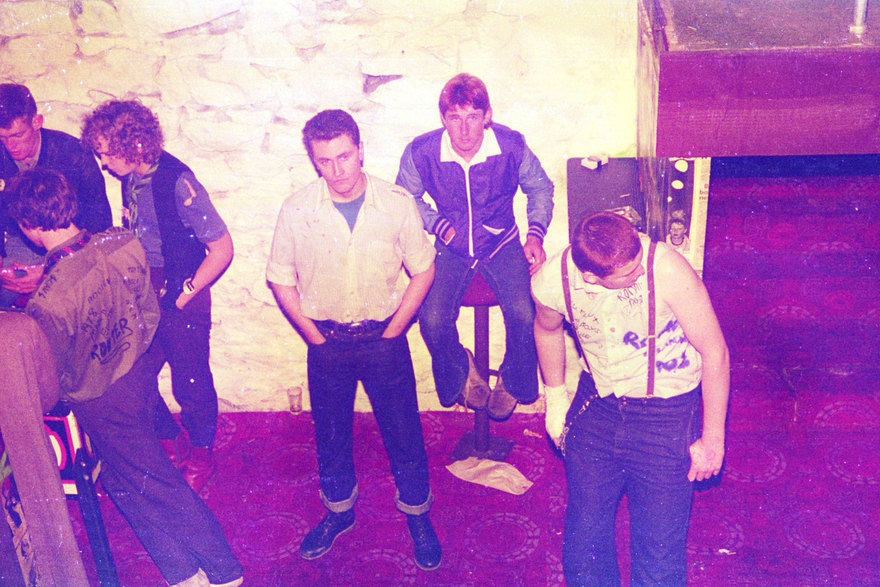 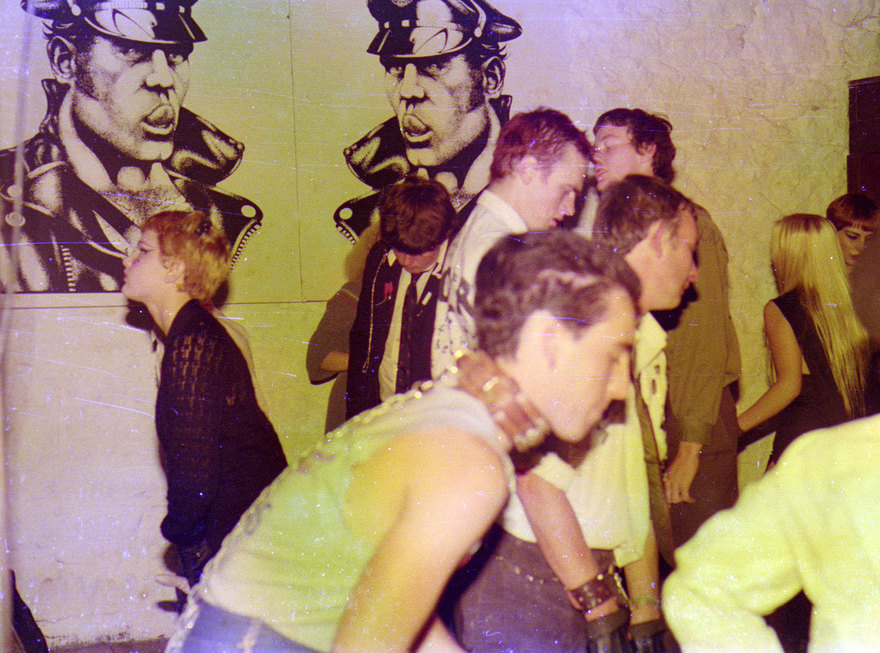 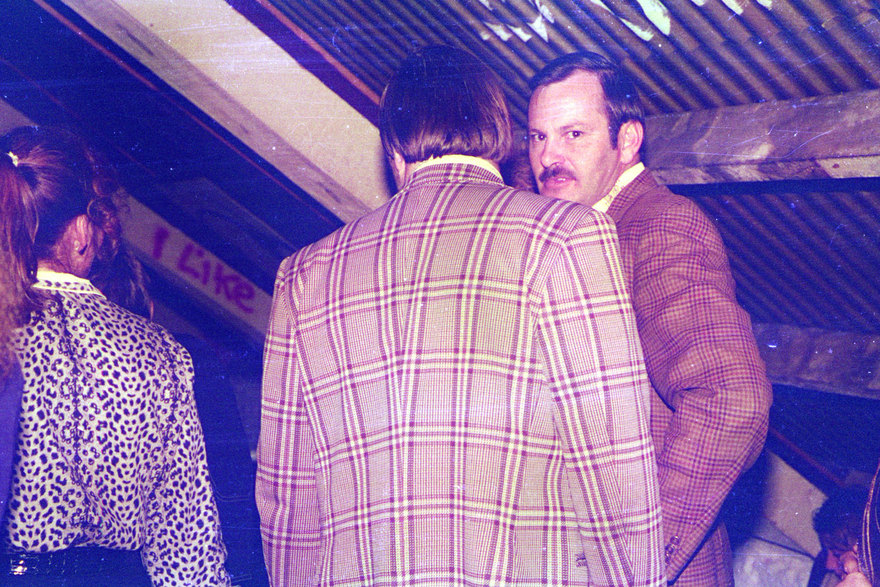