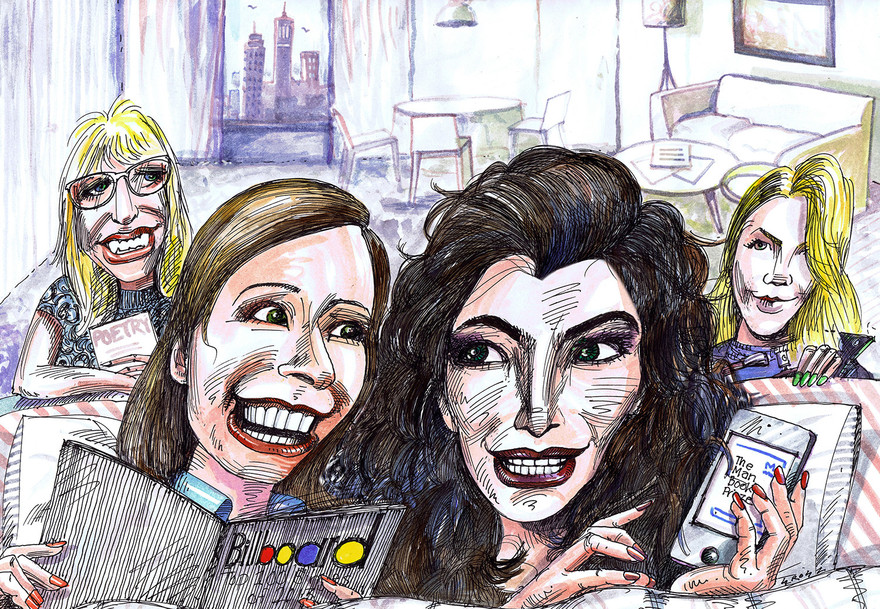 For a brief moment, New Zealand was on top of the world thanks to a 16 year-old musician and a 28 year-old writer, rather than sweaty men in muddy boots or yachting latex. A cultural summit meeting between them took place in a Manhattan hotel in November 2013.

For months ‘Royals’ by Lorde, aka Ella Yelich-O’Connor, had ascended the global pop charts, and it had recently returned to the US No.1 spot in the Billboard Hot 100. Simultaneously, in London, Eleanor Catton won the Man Booker Prize for her novel The Luminaries.

Introducing Ella to Eleanor was Gemma Gracewood, a creative dynamo who took her charm and awesome connections from Aotearoa to Brooklyn for a few years.

It was their success, not mine, she wrote later; she just likes to make Awesome Things Happen. “There was no media strategy around what we did, just love and excitement. We thought the photos spoke for themselves.” Also present was Sonja Yelich, accomplished poet and mother of Lorde, and Amber D, makeup artist in the fast lane.

A combination of factors made it happen: an on-to-it sister back home, a Brooklyn bookshop, an expatriate artisan pie-maker, social media and “a small country that needed some good news to latch on to in a bleak week”. (News from home of men and teenage boys behaving very badly.)

Writes AudioCulture commentator Rosie Howells, “The conversation may have been genius, deep, explosive – all three, or none of the above. Perhaps each of the pair was reacting with the only other person who, in that moment, got it, and there was no need to explain, celebrate, or lament.

For those back home whose pride kept them levitating for a few days, the moment was complex and monumental.

“We’re bigger than we ever dreamed,” sang the songwriter in the room. “I guess the Lord must live in New York City,” wrote another, in an earlier age.

This is the third of a bi-weekly series about unlikely encounters experienced by New Zealand musicians. Read more about Chris Grosz, musician and illustrator.