f t
In the pioneering days of rock and roll in New Zealand, the saxophone was more likely to be the instrument for a flashy solo than a lead guitar. Leading young players such as Bernie Allen recorded sessions for Johnny Devlin and others, then returned to their first love, jazz.

By the early 1960s, the guitar had taken over. If a sax featured on a local rock or pop record, it was likely to be the work of one man, an Australian. Jimmie Sloggett arrived here in 1963, aged 23, after marrying Auckland singer Carol Davies. They met in Sydney when both appeared on Johnny O’Keefe’s TV show, Six O’Clock Rock. In Auckland, Sloggett hit the ground running; within days he was playing with Max Merritt and his Meteors, and Herma Keil.

Soon he was on tour with the Miss New Zealand shows, which also featured the Howard Morrison Quartet, coquettish vocalist Kim Kreuger, and Bill & Boyd. For promoter Benny Levin, he played on the New Zealand tours by Ben E King and Gene McDaniels. Ricky May briefly tempted him back to Sydney to play in his band at the notorious Latin Quarter club, but after that Sloggett was New Zealand-based for over a decade.

Sloggett was soon signed by Viking and began recording prolifically. Within six months he had recorded and released two singles – ‘Yakety Sax’ and ‘The Battle of New Orleans’ – plus an EP called The Sax Man, and an album, The Battle of Yakety Sax. He was also appointed Viking’s musical director and arranger at recording sessions.

Brass instruments were a big part of his childhood, as his father Harry was a renowned brass bandmaster in New South Wales. Sloggett got his start aged four, playing classical piano, began playing in brass bands at eight, and by his teens was a state champion on the euphonium. He moved to Sydney as an apprentice piano tuner, but instead became a full-time musician when he was hired to play sax in Johnny Rebb’s Rebels, then one of Australia’s top rock bands. With the Rebels he performed on Lee Gordon tours supporting the Everly Brothers, Sal Mineo and Tab Hunter.

Back in New Zealand after his brief stint with Ricky May in King’s Cross, there was almost no time to draw breath. Apart from his role as a performer and musical director with rock bands, Sloggett played with jazz musicians such as Merv Thomas, Tony Hopkins and Mike Walker, at Auckland’s Peter Pan cabaret and Montmartre nightclub. By the mid-1960s, he was leading a band playing six nights a week at the Inn at the Park cabaret, part of the Logan Park motel complex.

The Inn at the Park was a new concept in New Zealand entertainment: a floor show with a regular band and visiting singers, in a restaurant that served alcohol till almost midnight. All the players had to be able to read music, as they backed overseas singers who arrived with their charts, as well as locals such as Toni Williams, Eliza Keil and Tommy Adderley. Recalling the season with Adderley, Sloggett said proudly, “We would be the only little four-piece group that had the guts to take on the eight-minute 30-second version of ‘MacArthur Park’.”

At the same time, Sloggett was MD for C’mon, the legendary NZBC-TV pop show produced by Kevan Moore, writing charts when he got home from Logan Park. Occasionally, after hours – when did he sleep? – Sloggett jammed with blind keyboardist Claude Papesch at Mojo’s.

For Viking, Sloggett often recorded with the Embers, a band of ace players that included keyboardist Mike Perjanik, guitarist Doug Jerebine and bass player “Yuk” Harrison. Later in the 1960s, he was a member of the Auckland Neophonic Orchestra, which was an all-star big jazz band that combined older players such as Jim Warren and Murray Tanner with musicians of the next two generations, including Bernie Allen, Tony Baker, Bruce Lynch and Bruce King.

Sloggett often worked with Radio Hauraki when it was still a pirate station, recording call signs, station IDs, jingles (‘Choysa Tea’, with Tommy Adderley), and the Cindy covers albums, which featured 90-second versions of the Logan Park Inn band playing sound-alike versions of current hits. In 1967 he produced ‘Slightly-Delic’, a zeitgeist single by the psychedelic rock band House of Nimrod. “It was the most wonderful thing,” he told me in 2006. “It enjoyed some really good air play. It was in the flower-power time, and I must admit I loved that era.”

In 1966 Jimmie Sloggett partnered with Phil Warren in the A&R and production company James Productions, with a roster that included Sandy Edmonds, The Chicks, The Keil Isles, Billy Kristian and Lew Pryme. Aside from the James Productions work, Sloggett was also in demand as a producer, working on albums by Howard Morrison, Ray Columbus, and Mr Lee Grant, as well as singles by Lindsay Marks, Herma Keil and others. Recalling his days in New Zealand, Sloggett spoke with extraordinary fondness of the people he worked with, rattling off names like a Who’s Who of local music.

There seemed to be no genre he wouldn’t try; unlike some of his jazz friends, he had no musical snobbery. In the early 1970s he even put together a big band called the Frank Zappa Experiment for a one-off gig. Among the many musicians were vocalist Tommy Adderley, Billy Nuku on drums, and Billy Karaitiana on bass, and they performed in rural Auckland in front of a crowd of about 80 people – “everyone in the band, their wives, husbands, girlfriends and kids. We let fly with this thing, and it was just fantastic.”

“Lots of people swear black and blue that I’m a Kiwi,” he reflected in 2006. “But no, I only went there to have a look at Carol’s country, and ended up staying.” By the mid-1970s, Sloggett was feeling drawn back to Australia, where he was offered production and session work. In 1977 he returned there permanently, setting up a Sydney studio to make commercials and soundtracks. He never abandoned live work, however, and in 2002 was the musical director for the very successful Australian 1960s revival tour Long Way to the Top. Nearly 40 years on from his days at Viking, he was once again playing with Max Merritt and Dinah Lee. 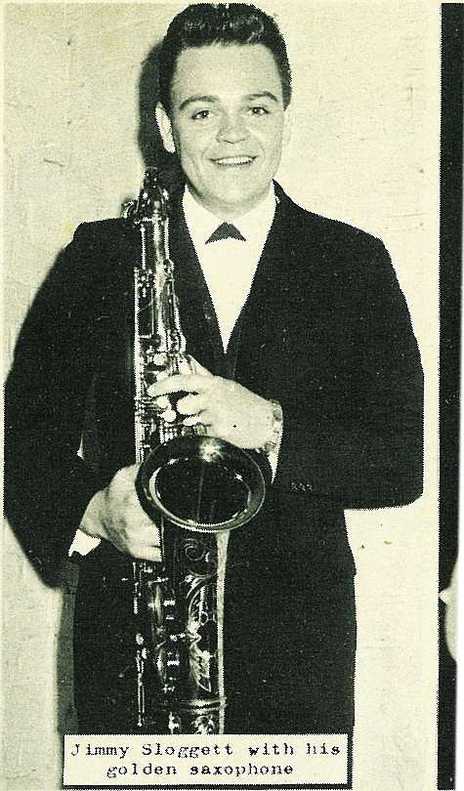 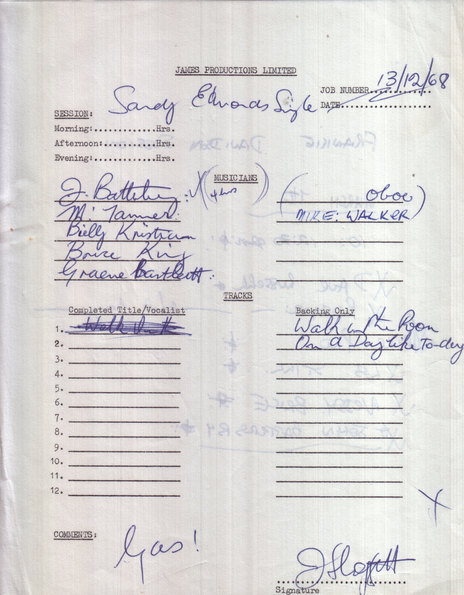 The original session notes for Sandy's 1968 recording of the backing of her hit When You Walk In The Room. The session was produced by Jimmie Sloggett and the musicians included Billy Kristian, Bruce King, Murray Tanner, Gray Bartlett and Mike Walker. 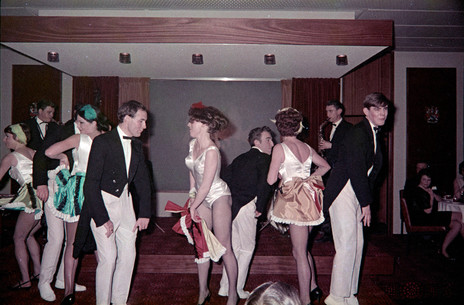 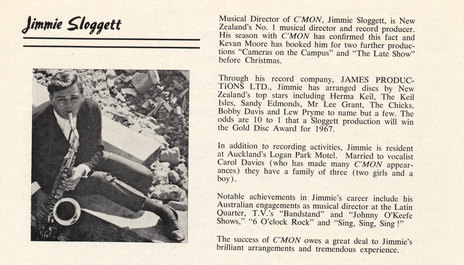 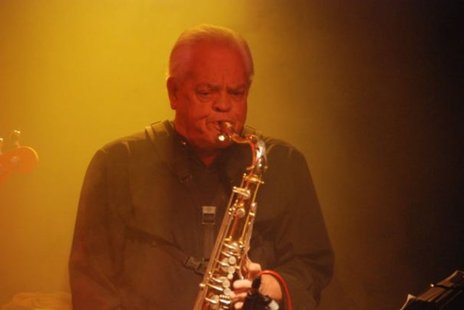 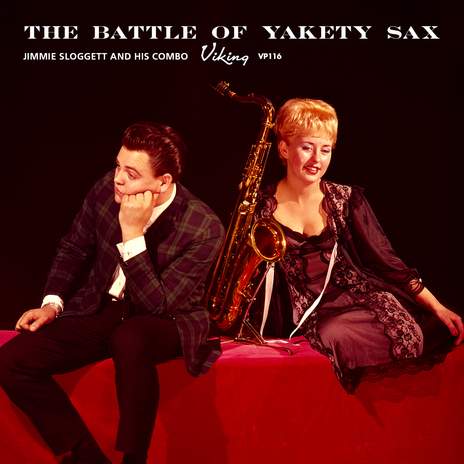 The 1964 The Battle of Yakety Sax album 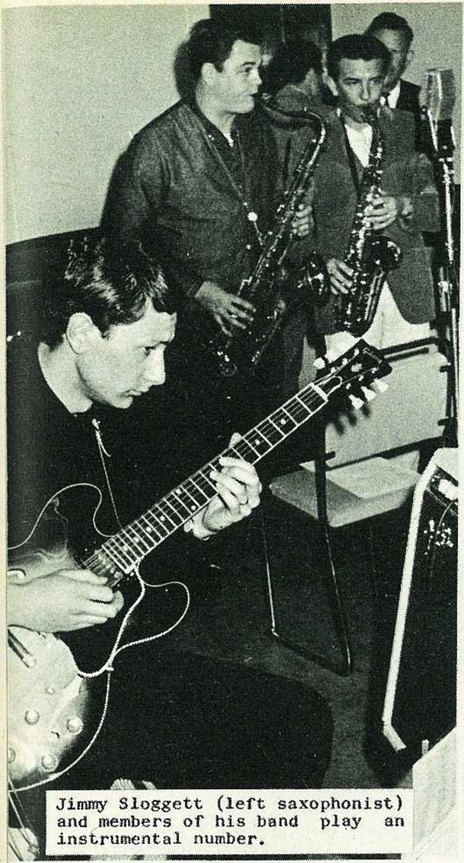 Jimmie Sloggett and band in Gisborne, 1964 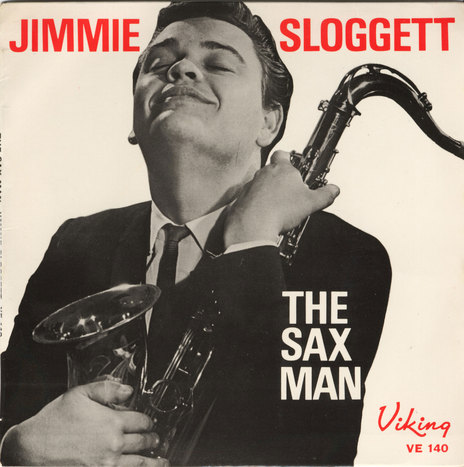 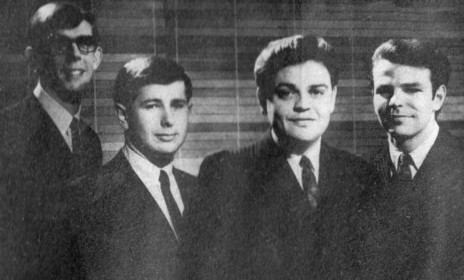 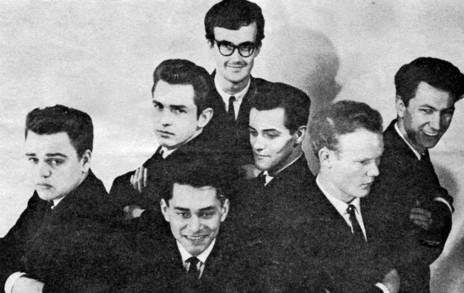 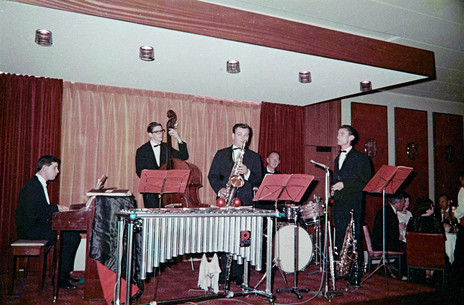 Jimmie Sloggett and his band performing at the Logan Park Motor Hotel, Greenlane, October 1966. Among the other musicians are Kevin Haines on bass and Ray Edmondson, drums. 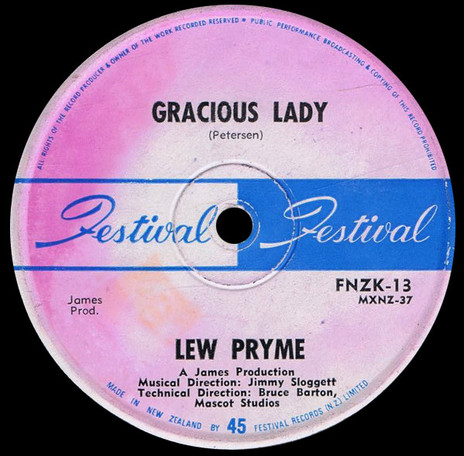 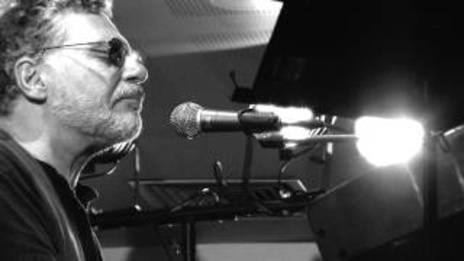 Andy Cowan Band - Girl In The Garden, with Jimmie Sloggett, 2012 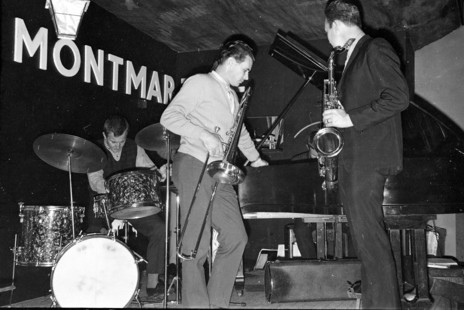 Merv Thomas and Jimmie Sloggett at the Montmartre, Auckland. Thomas played on many sessions arranged by Sloggett. 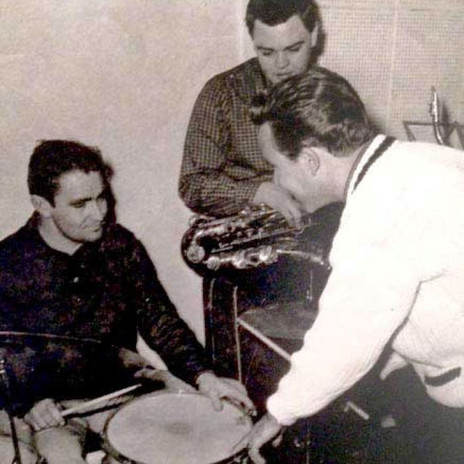 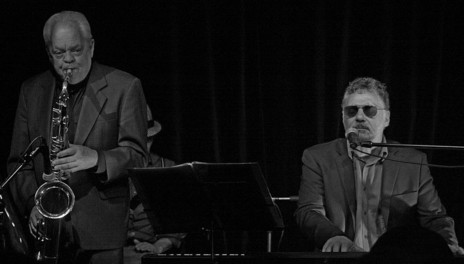 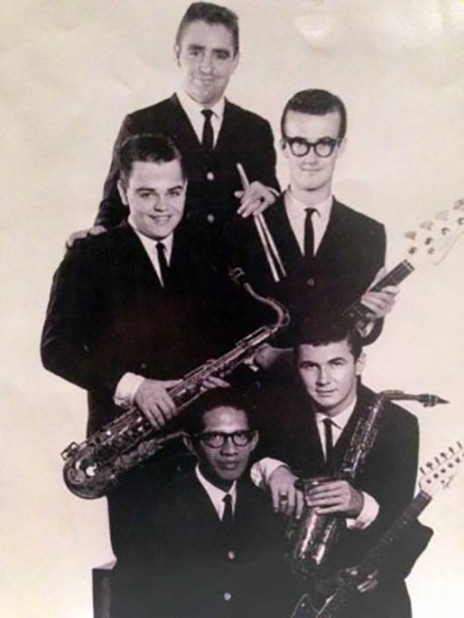 Jimmie Sloggett with The Deejays, 1960 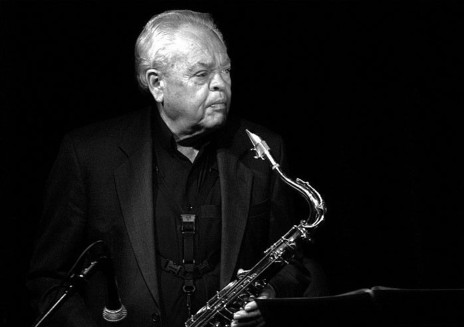 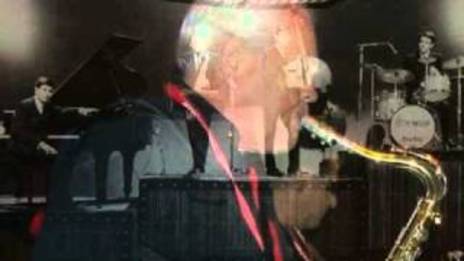 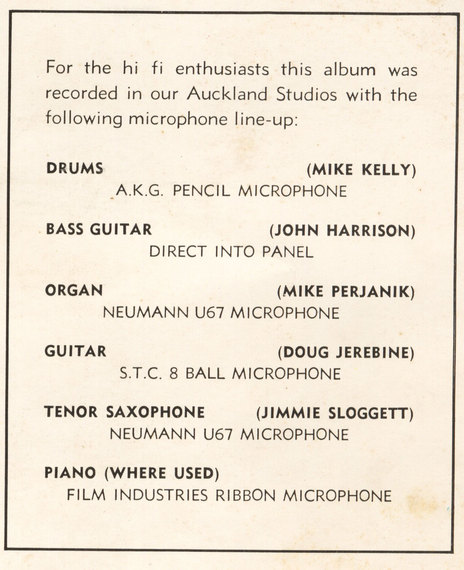 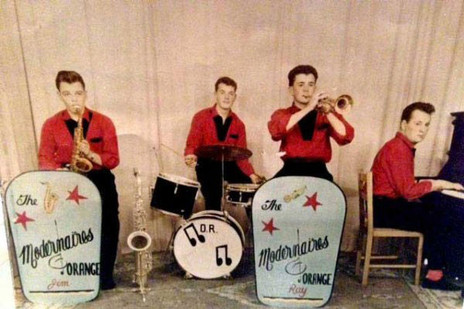 Jimmie Sloggett with The Modernaires in the late 1950s

Amongst the bands Jimmie played with in Australia before he moved to New Zealand were The Moderrnaires and Johnny O'Keefe's backing band The Dee Jays.