Give It a Whirl: Dilworth Karaka interview

Give It a Whirl: Dilworth Karaka interview 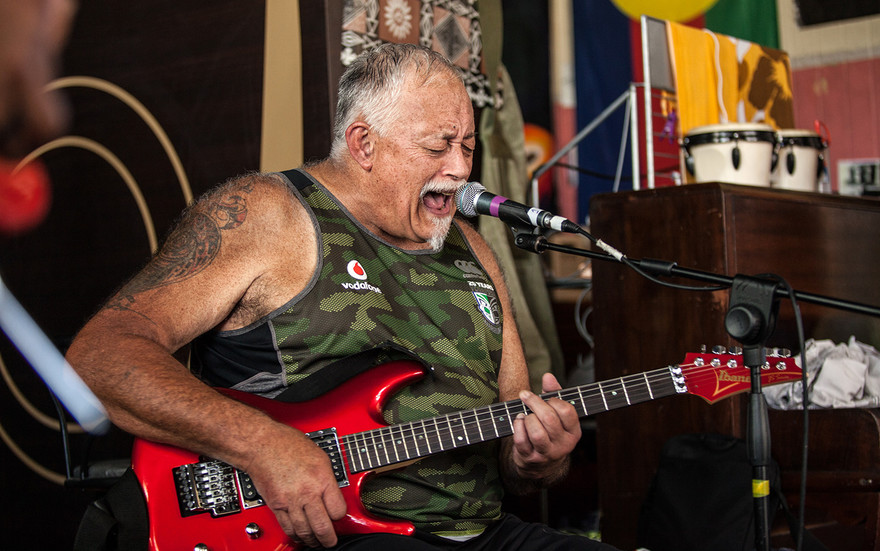 In this interview for 2003 television series Give It a Whirl, Dilworth Karaka recalls how he got into music, the early days of Herbs and the release of their 1981 EP Whats’ Be Happen, their anti-nuclear testing stance with the hit single ‘French Letter’, and how Charlie Tumahai joined the lineup. He also discusses the impact and influence of Bob Marley, recording the vocals on ‘Slice Of Heaven’, working with the Eagles’ Joe Walsh, and launching their 1987 album Sensitive to a Smile in Ruatoria.

Watch below: Full-length interview with Dilworth Karaka from Give It a Whirl (2003) via NZ On Screen (2022).

Watch below: Dilworth recalls the early lineup of Herbs, and planning the band’s direction. “The issues we were dealing with, nobody else was doing it. Record companies didn’t want to get involved with bands dealing with politics; politics and rock and roll just didn’t seem to gel. If anything they repelled from each other.”

Watch below: The cover of, and controversy over, Herbs’ 1981 release Whats’ Be Happen? “It was Tim Shadbolt that came up with the cover ... that photo was taken from a helicopter. A Star reporter who was a friend of Tim’s at the time. Once we saw that, we went ‘that’s the one we want.’”

Watch below: Dilworth Karaka recounts how the French nuclear testing programme in the 1970s inspired the Toni Fonoti-penned hit ‘French Letter’. “Because of what the French were doing in Mururoa with the testing of their nuclear arms ... the guys were at one of the hospitals and at that time there were a lot of Tahitian and Tongan people over for the treatment of cancer ... Because of the head job [the title] did to you, it upset the French. [Toni’s] reply was, ‘well, testing your bombs in my back yard is upsetting me.’”

Watch below: Dilworth Karaka on making ‘Slice Of Heaven’ with Dave Dobbyn: “We’d flown to Wellington at night, landed there about 10 o’clock ... that day Dave had been charged with inciting a riot ... he was really upset because of that. We supported Dave in every way. Here we were, 10, 11 o’clock at night, we’re in the bar and he’s just finished in the studio, we go back in to listen to the song thinking we’ll be going back in the morning at nine or 10 to start the vocals. Five o’clock that morning we walked out of the studio, we’d finished the vocals. Because when we got there to listen to it, Charlie [Tumahai] and Willie [Hona], David explained something to them, and Charlie and Willie spontaneously made this harmony sort of move and Dave said ‘that’s exactly what we want.’”

Watch below: Dilworth Karaka recalls how Charlie Tumahai brought his international experience to Herbs. “Chas had been away from New Zealand since 1966 or 1967 ... the only time he came back was for his dad’s funeral. That night we all ended up down the [Glen Innes] hotel. Chas got up and said, ‘none of you would have ever heard this song’ ... it was the first time I’d ever heard anyone sing a version of ‘No Woman No Cry’. For Charlie to come back maybe 10 years later, he came back with his family from the UK, and about three weeks later he was looking for a gig.”

Watch below: Dilworth discusses launching Herbs’ 1987 album Sensitive to a Smile in Ruatoria. “The whole essence of going down to Ruatoria ... let’s go and release our album there, to share some happiness with them and hopefully in turn make them think about some of the things they’re doing in their own back yard.”