Auckland’s punk bands were among the most exciting on the live scene in 1979, so the unlicensed music venue Island of Real began booking them. However, the skinheads who followed bands like Zwines favourites The Terrorways would terrorise audiences at gigs and attempt to trash venues. Charley Gray managed Island of Real, pioneering coffee culture in Auckland as well as managing Th’ Dudes. Gray was a busy man and he didn’t need to be calling plumbers to rebuild his toilets after skinheads had smashed them.

he didn’t need to be calling plumbers to rebuild his toilets after skinheads had smashed them.

So the Island of Real closed in 1980, and Bryan Staff and his flatmates bravely took on the lease and opened XS Café. Staff was a night time DJ on 1ZM and had successfully set up Ripper Records to document the local punk scene with the AK79 compilation album. I remember Bryan manning the door and selling toasties – just what every hungry teenager wanted after bouncing around to local bands!

XS was located in Airedale St, just off Queen St and as a 15-year-old from Mt Roskill I would get off my Lynfield bus in front of the St James cinema and walk the short distance to XS. This walk could turn into a sprint as members of the King Cobras – then a teenage Polynesian gang from Grey Lynn – would hang out in Aotea Square and wait for us punks to start our trek towards XS. Having sighted us the KCs would cross Queen St hot on our trail. We would walk faster, constantly glancing backwards to see how close the KCs were until, either our nerve broke or the KCs began to run at us, so causing a panicked flight towards XS. 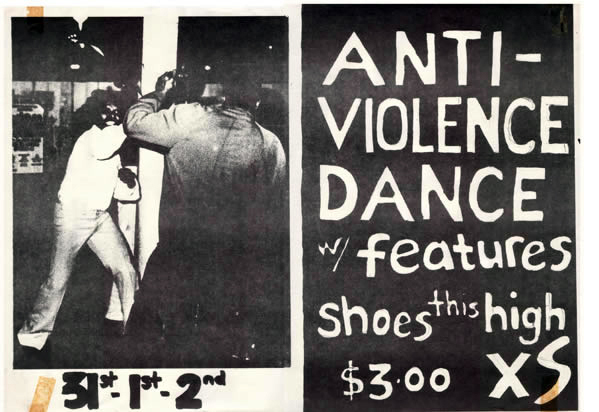 What were the origins of the tensions between Auckland’s punks and Polynesians? I’m not sure. The original punk club Zwines shared street space with Babes, a disco popular with Māori and Polynesian youth, and perhaps the difference in musical styles set confrontation underway. Or in conservative 1970s New Zealand, the punks’ hair and clothing may have sparked a virulent, violent reaction – conform or die! – or something like that. In the UK punks were attacked by teddy boys – this atmosphere of mindless violence certainly fitted the music’s ethos of loathing and paranoia. 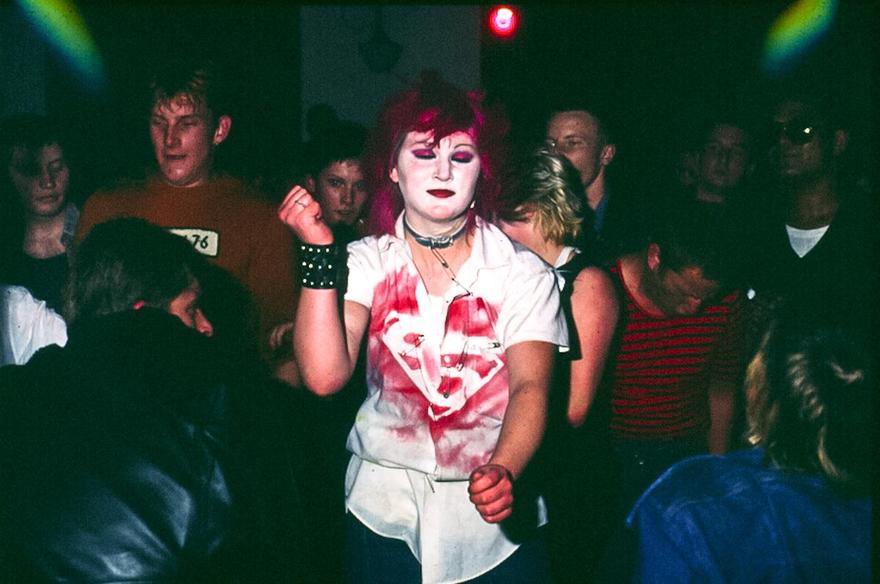 If little punks like me were terrified of the KCs we shared with them a fear of the skinheads. Reaching XS breathless, we would shout through the door “KCs! KCs!” and a posse of skinheads would come thundering out and the KCs would turn tail and flee back towards Aotea Square as the bootboys gave chase.

While this might all sound like teenage hi-jinks it could and did get nasty – the skinheads were known to arm themselves with knives, iron bars and even an axe. Once, in 1980, the skins chased the KCs back to their clubhouse and took an axe to the door – how do I know this? At Lynfield College there were pupils associated with both the skins and the KCs and weekend battles would continue on the playground.

Where did the Auckland skinhead movement come from? I’ve no idea. They existed before the skinheads associated with London’s Oi punk bands – Cockney Rejects, Sham 69, 4 Skins – got any real media coverage. And while the Auckland skinheads would fight with the KCs they were not purely Caucasian, there being Māori and mixed race members. One thing’s for sure – the skinheads were often nasty bruisers and many were more interested in fighting than the music. And if not fighting with the KCs then with anyone else who entered their arena. At XS this meant fights regularly broke out on the dance floor as skins bashed us punks or one another. 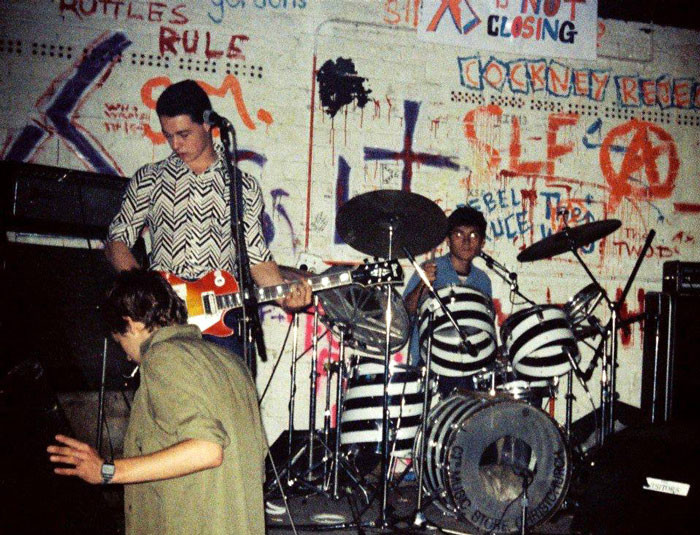 Andrew Boak and Richard Foulkes with The Regulators at XS Café.  - Photo by Jamie Muller.

Joey Ramone would, post-concert, describe that particular gig as the most violent of their career.

The cover of Bryan Staff’s Ripper Records compilation album Rip, Shit Or Bust is a photo of a brawl on the XS floor and the skin with his mouth agape in awe at the ruck underway was one of my Lynfield College alumni.

The highpoint – if you can call it that – of skinhead Auckland was The Ramones’ Logan Campbell Centre concert in 1980. As the quartet from Queens ripped through their set, skins battled security in a frenzy of violence and attacked members of the audience. Joey Ramone would, post-concert, describe that particular gig as the most violent of their career. At the time I could not believe this, but looking back on late-1970s Auckland, I now believe him: The City of Sails was a brutal place where brawls spilled out of pubs and onto the street every weekend. 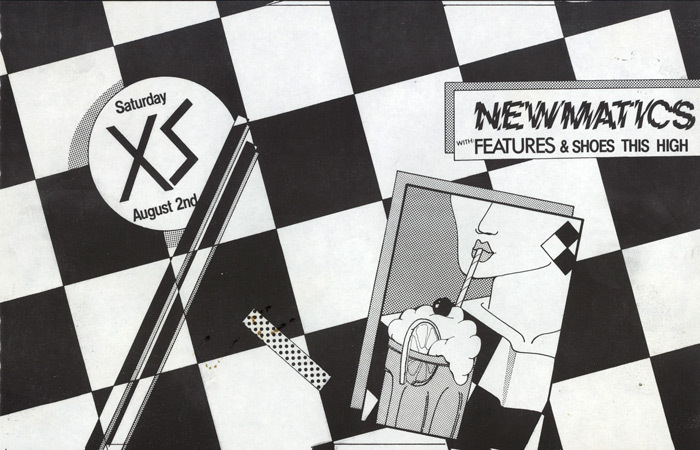 The Newmatics, The Features and Shoes This High at XS Café, August 1980

Keep it down, it's the Riot Squad

Another gang who liked to make appearances at XS was the Auckland Police Task Force. It now appears obvious to me that these uniformed thugs were using the punk clubs as a warm-up for the forthcoming South African rugby tour – I don’t know if members of Red Squad were ever in the Riot Squad but the tactics they employed were similar. The Newmatics, one of the young bands who cut their teeth at XS, wrote their best slab of NZ ska, ‘Riot Squad’, after the police beat up skins, punks, school kids and anyone else in an illegal, unjustified raid on XS one night.

For us kids XS was an oasis of music and excitement, a place to bond with like-minded youth from across Auckland, a place to meet many a fellow freak and misfit.

If my memories make XS sound like a nightmare of constant violence from all sides I should emphasise that it was a great little club to see young bands. I caught the Newmatics, Blam Blam Blam, The Screaming Meemees, The Spelling Mistakes, The Androidss, The Features, Gordon Bennetts, Flicks (pre-No Tag North Shore adult punks), Shoes This High, Alms For Children, Herco Pilots, Green Eggs & Ham, the Instigators and heaps of others. The stage was higher than that of the Squeeze venue and the powerful PA meant the bands could really rock.

For us kids XS was an oasis of music and excitement, a place to bond with like-minded youth from across Auckland, a place to meet many a fellow freak and misfit.

At XS I made close friends and encountered ideas and ideals that never got discussed in Mt Roskill. In its 18-month existence XS was a place to feel free in – even if your freedom was constantly under threat from knuckleheads who preferred to hit rather than embrace people.

Bryan Staff always seemed to be there, the raven-haired adult with a goofy grin and a beatific presence, looking after things, keeping an eye on the stage, tidying up the mess, never less than gracious. He was, and in this sense remains to me, a teacher, an inspiration. Running XS would have cost him money and often been stressful. To dedicate his weekends to XS shows a true devotion to Auckland rock and roll. Arise Sir Bryan, honoured as you should be due to your work with NZ punk! 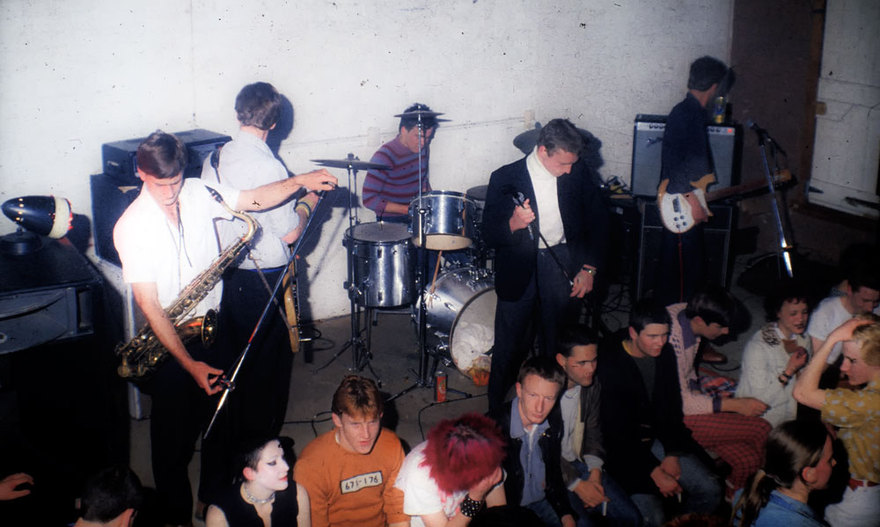 When Auckland City Council refused to renew XS’s lease in 1981 – due to “anti-social behaviour” – it signalled, in some ways, the end of an era: Staff would soon shift to Wellington and Auckland’s post-punk rock scene would rapidly implode. Almost every band I mentioned seeing at XS had split by late 1981.

And those few who remained were swept away by the Dunedin scene, as characterised by The Clean and The Chills. Flying Nun’s initial bands brought a sonic maturity and a worldly aesthetic unknown to most Auckland’s young rock musicians who still played lots of covers and studied the NME for ideas on what they should sound and dress like.

The Dunedin scene – as initially heralded by Toy Love (whom I’m sure never played XS, they being too popular by 1980 for such a small club) – would revolutionise NZ rock in a manner unforeseeable at XS. When The Clean came to Auckland in 1981 they debuted at a lunchtime concert at Auckland Technical Institute – literally a stone’s throw from XS. But by then XS’s doors were closed and a new era was underway.

XS has never got a lot of credit in histories of New Zealand rock but as the unofficial home to Ripper Records and briefly the centre of Auckland’s rock energies in 1980 it should be celebrated. Not that much later another underage music venue opened in Symonds St called The Venue. It catered to a young audience happy to regularly see The Mockers, Katango and Russ le Roq (AKA Russell Crowe –  a face about town, if a bit of a joke) – and by then I had a fake ID so could go to the Rumba Bar and Reverb Room to catch bands.

In an Auckland where so little activity (beyond sport) was available for teens, as a pimply 15-year-old who lived solely for shorthaired rock and roll, I will never forget how, this box-like venue allowed us to experience just that, at its most raw and dangerous.