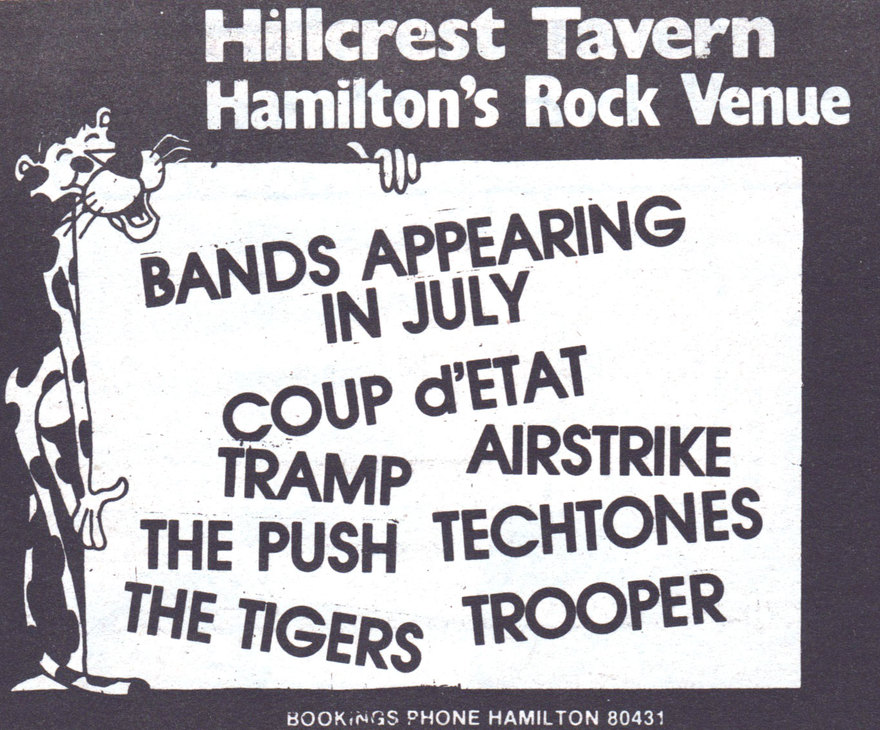 You entered the Turquoise Room, the Hillcrest’s live band venue, by skirting down the side at the back of the modern, asymmetrical, single storey, concrete block tavern. Then it was right into the dimly lit cedar wood-panelled, T-shaped bar with its A-framed acoustic-treated roof and a small stage at the end closest to the tavern’s edge. That much of the evening was always predictable. What you heard inside Hamilton’s longest-lived original music bar depended on what rock and roll sounds were current.

When The Tavern Hillcrest opened on the corner of Clyde and York streets on July 22, 1970, it was a Leopard Brewery pub, part-owned by Hamilton businessman FJ Callaghan, and the music on offer came from the middle of the road covers acts. For anything wilder and more experimental, you went to Tabla II in town and the nearby Student Union Hall.

Located close to University of Waikato, Hamilton Teachers College and Ruakura Agricultural Research Centre on the eastern edge of the city, the tavern drew a young crowd of students and locals. By the late 1970s, the crowd was demanding louder, more contemporary music from groups, who wrote their own songs.

In mid-1979, Hamilton had two rock and roll venues running bands six nights a week. The Tavern Hillcrest and The Corner in the Hamilton Hotel on Victoria Street. There were three other venues that regularly featured rock and roll indicating a robust and inquisitive music scene in the city.

You could catch a six-date Toy Love run at the Hillcrest in mid-July 1979; they returned for a similar run at The Corner in early August. Pub rockers Johnny and The Hookers, Hello Sailor, Th’ Dudes, Sheerlux, Street Talk, Larry Morris’ Shotgun, Flight X7 and Lip Service performed at The Corner and Lady Hamilton in July while Rough Justice meted it out at Waikato University.

Late August saw the opening of The Studio, the “new wave restaurant” on Angelsea Street. In September, The Studio became Jupiter’s and featured new Auckland groups Gary Havoc and The Hurricanes, The Snipes, The Terrorways and Proud Scum.

Mid-September, The Swingers were at the Hillcrest followed by a week-long run for Richard Von Sturmer’s Plague. Those of a more mainstream inclination could see Dragon on September 23 for $6.50 at Founders Theatre. On the following two nights folkie Chris Thompson was playing The Corner. 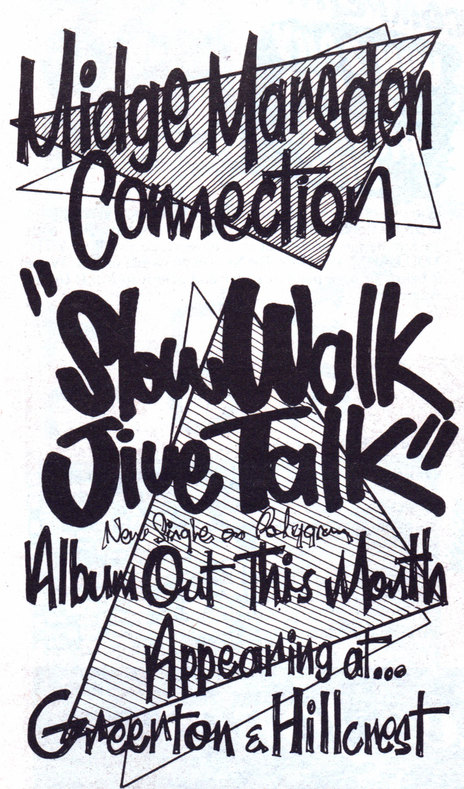 The Hillcrest Tavern was never alone in providing modern music in the city, but it was the one constant city presence on the rock touring map and its gig list reflected the wider currents flowing through NZ’s popular musical culture.

The early 1980s live boom brought more pub rock to the Hillcrest from the likes of Sheerlux, Gary Havoc and The Hurricanes, Top Scientists and Hammond Gamble Band. Seasoned performers who were making a fresh grab at fame in contemporary outfits, including Wellington’s The Crocodiles and The Tigers and Auckland’s Coup D’Etat, gained an audience there and found one well into the 1980s. Australian groups touring New Zealand stopped in with Midnight Oil playing out a four-day stretch in August 1980. But it was Christchurch’s Splash Alley, who became Pop Mechanix, and The Techtones, who indicated the change to come. 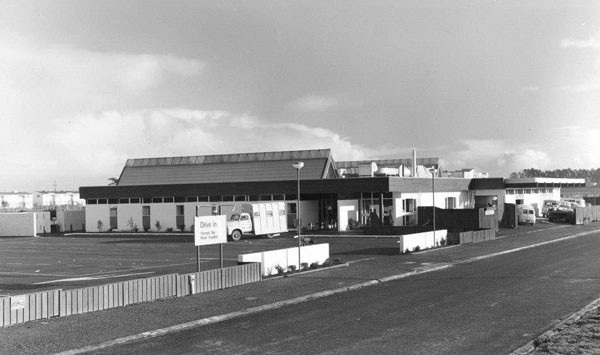 In 1981, New Entrants, Billy and The Blue Flames, The Knobz, The Neighbours, The Newmatics, Midge Marsden, The Valentinos, Penknife Glides, Blind Date, Hip Singles, The Clean, The Androidss, The Gordons, Broken Dolls, The Furys, The Screaming Meemees and The Corners brought high-energy street rock and R&B and some of the country’s newest sounds to the student pub.

Hamilton fans were spared the year’s most out there booking when Residents’ accomplice Snakefinger cancelled his May 27 performance after a heart attack in Australia.

A mix of pub covers groups filled in the gaps. Hamilton bands would be a fitful presence throughout the venue’s life. Most of the city’s best groups played there at least once, including The Accessories, The Bronx, The Politicians, The Human Lawnmowers, Cygnet Committee, Watershed and The Datsuns.

1982 brought a mix of post-punk acts with singles in the charts and old guard rockers on the rebound. The Narcs, The Screaming Meemees (twice), Brazier’s Legionnaires, DD Smash, Penknife Glides, The Spaces, Blam Blam Blam, The Gurlz and Willy Dayson all came to town, booked by Auckland-based New Music Management.

As in 1979, rock music fans had a choice of active venues in the city in late 1981 and 1982, which fed into each other, compounding the sense of music-driven excitement. Macey’s was a fully licensed rock club at 80 Riverlea Road on the city’s southern edge that lasted less than a year, but in that time it played host to Australian rockers The Angels in July and a full roster of groups from the thriving Auckland based rock scene of the early 1980s. Some of the best of New Zealand’s post-punk contingent such as The Swingers, The Steroids, Penknife Glides and Danse Macabre performed there.

Rhythm and blues was another strong draw on the busy national music circuit, represented by Willie Dayson, Midge Marsden, Dave Maybee, and Australians’ Phil Manning and Matt Taylor, who all played the Hillcrest. I don’t have a category for Dunedin loonies Mother Goose, but you’d find them there as well.

Elsewhere, Framptons in the Te Rapa Tavern was still going strong as was the Lady Hamilton.

The Hillcrest’s small stage overflowed in 1983 with the horn driven Big Sideways, Miltown Stowaways and Dunedin’s Netherworld Dancing Toys. The new pop of Dance Exponents and The Mockers could be found there as well – setting the scene for the rest of the 1980s – popular groups flogging their latest record or in Sam Hunt’s case, books, on nationwide tours. 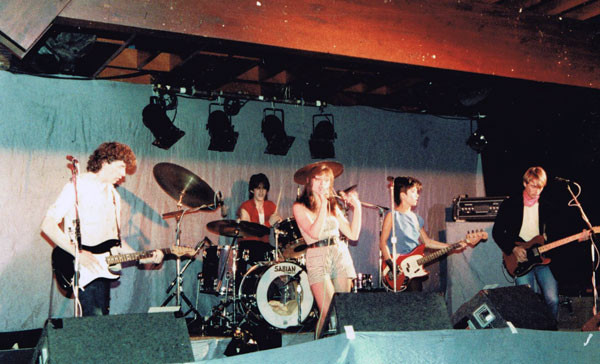 Post-punk groups on indie labels like Flying Nun established a strong support base in Hamilton in the mid to late 1980s and early 1990s. In 1984, YFC and Skeptics presented a challenging double bill and The Verlaines and The Gordons checked in. The Chills were onstage in September 1985, the same month as The Builders. The Bats, Skeptics and The Verlaines performed in 1986.

The following year brought a deluge of indie acts. The Chills came in January 1987. Straitjacket Fits and Look Blue Go Purple in February. The Verlaines and Breathing Cage in July, Straitjacket Fits in October and Dead Famous People in December. There were visits from Auckland's The Warners, and from Number Nine, Sticky Filth (twice), and The Wild Poppies who hipped locals to the strength of the lower North Island’s punk and alternative scene.

When The Chills and Straitjacket Fits returned in 1988, they were pushing strong albums in Brave Words and Hail. Famously, The Chills’ Martin Phillipps was busted in the back car park, nearly derailing his career. No hard feelings – he returned in July 1992. Straitjacket Fits came back in September 1992 and May 1993. By then, both groups had an international reputation and record deals.

The Hillcrest, sometimes known as The Hilly and H Block, continued to showcase an especially robust Hamilton independent scene throughout the 1990s in tandem with its main cheerleader, student station Contact 89FM. Discordia Concors, a selective history of Hamilton indie music, had its launch party with Swamp Goblin, Book of Martyrs and Wendyhouse there on 28 September 1993.

Other 1990s spaces finding favour included Highlights (which became Rockafellas) in Frankton in the early 1990s and the inner city Ward Lane Tavern and The Exchange on Victoria Street in the mid to late 1990s. 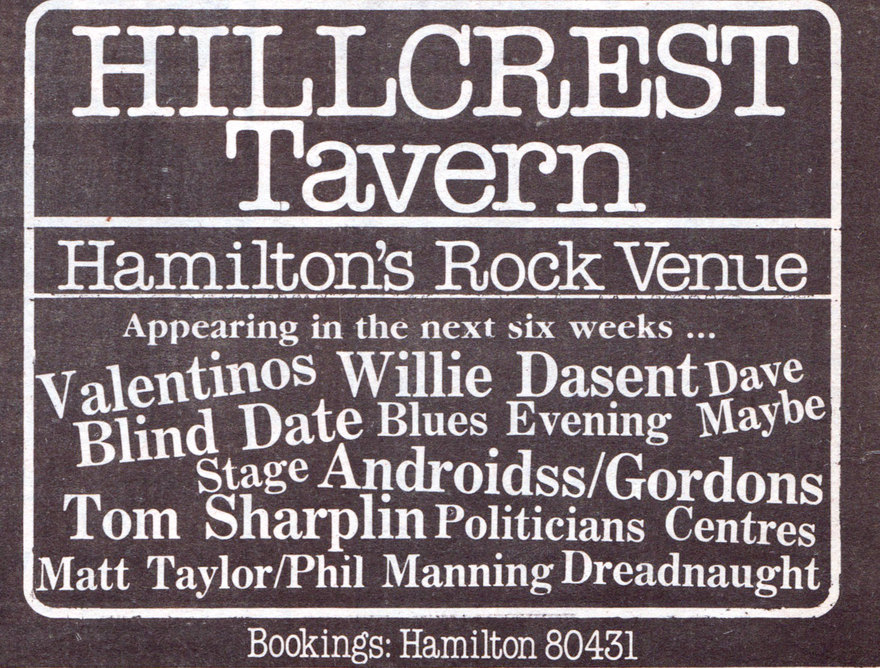 When Waikato University’s Wailing Bongo gave up live music for dance sounds in 1997 and student station Contact 89FM was sold to private interests, the Hillcrest’s role in university orientation increased. In 2000, the Hillcrest hosted local talent quest Band Experiments and The Datsuns headlined there on March 10, 2001. But increasingly, students looked to the inner city for their entertainment needs at perennial city venues such as Altitude, short-lived all ages spaces like Yellow Submarine in Ward Street and small bars like Flow on Victoria Street.

The Hillcrest was levelled for commercial redevelopment on May 16, 2006, as a small crowd of regulars, past and present, watched the city’s longest-lived pub venue go down.

I wonder if anyone watching the pub's final moments paused to remember Battling Strings chopping out a cheeky, clipped version of ‘Waiting For The Man’ and upstaging Died Pretty in September 1986? Headless Chickens in June 1988 with full visual film and light show, pushing debut album Stunt Clown? Or The Screaming Meemees rattling the building’s bones in 1982, as ecstatic fans sat up high in the roof beams?

The Hillcrest at The HTown Wiki.