The person behind these live-to-air broadcasts was Bob Bothamley, whose door at the New Zealand Broadcasting Service had the nameplate “Head Office Dance”. Wellington based, Bothamley had been a dance band musician in the 1930s, and this experience meant that he was the musicians’ patron within Broadcasting. He had an ear for the best in jazz and dance music – he hired Arthur “Turntable” Pearce – and the energy to make sure it was broadcast. Bothamley also ensured that New Zealand musicians were heavily featured in an era when their early recordings sometimes struggled to get air time. (His producer for sessions in Auckland was Don Patton.) 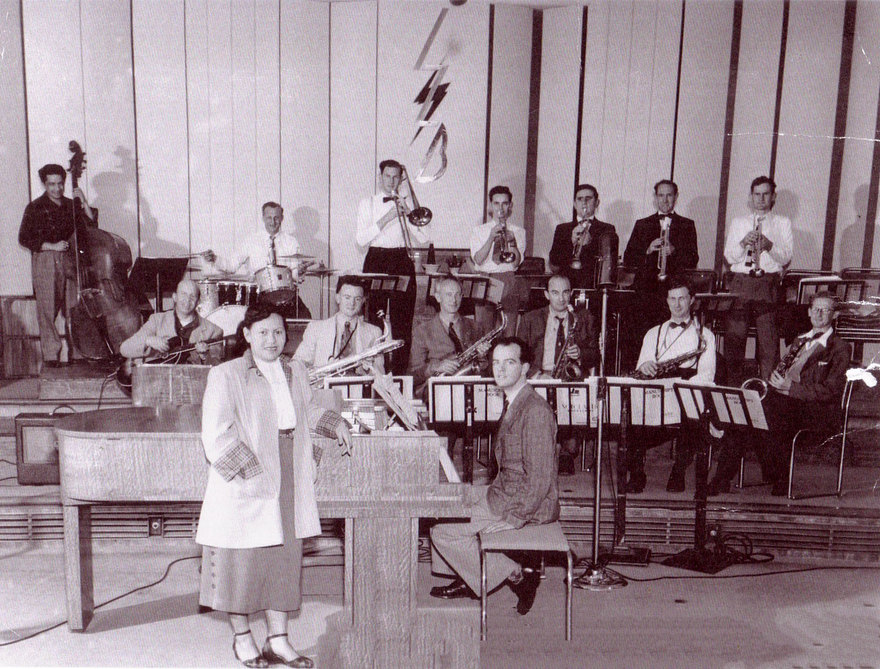 As Auckland bandleader and trombonist Dale Alderton explains, “Bob was an extremely good guy. He was in total charge of the budget for public radio broadcasting: a very powerful job. He had a lot of money to dispose of, and with that, it was his responsibility to disperse it throughout the bands in Auckland, Wellington, Christchurch, Dunedin, which he did very well, and the allocation of the money was always very fair and scrupulously honest, and everybody had a fair share.

“He was an immense enthusiast for popular music. He had been a sax player and knew the business and he devised this system where, to keep it fair for the band leaders, they were allotted a three-monthly contract on rotating basis. So I took my band in and out on the radio for three months, then it was, say, Lou Campbell’s turn. It went around and around.”

Bothamley was “a cunning man in many ways,” says Christchurch musician Doug Caldwell, “and a remarkable great friend to musicians. He was always on the musicians’ side. He’d often come down to Christchurch, and say, ‘While you’re having coffee listen to this … it’s what the boys in Wellington are doing.’ And he’d do the same with us, taking a tape to Auckland. It created and raised the standard. It was Bob’s way of getting things cracking.” 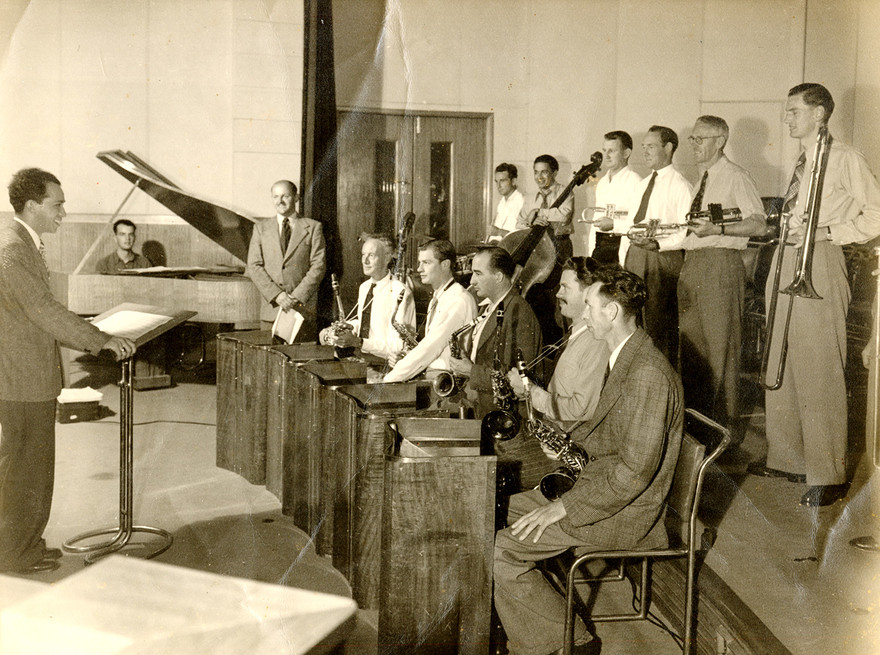 Merv Thomas, who played trombone in the Auckland radio band from the late 1950s, said he didn’t mind who was the band leader. “I just enjoyed playing – I mean we had Bob Gillett, Pem Sheppard, Lou Campbell, Dale Alderton, Bernie Allen, Bart Stokes … they all arranged at different ways. Dale was more the sort of the sweeter type of band, while Bart was the more experimental.

“In fact in one of Bart’s radio bands, on one tune I played tuba, trombone, clarinet and trumpet. He was a master at making people play double. If he heard you had another instrument, he’d make an arrangement where you had to play it. He was great like that. You’d be racing around the studio picking up the instruments. It was a wonderful training situation.”

The radio band system “got very cliquey after a while,” says Thomas. One band leader would only pick certain types of musicians, and with a 16-week contract there might be a break until the next contract and another band was assembled. Thomas seemed to get into all of them, however.

“And that was fine until it all fell apart when the water pistols came … trombone players need to keep their slides nicely lubricated and we use water and put a little bit of Ponds cream on the bottom. Then you just spray with water and the water goes into little globules, you see, and the odd time by accident you might be using your little spray bottle and it might get on to somebody.

“This seemed to degenerate where other guys started buying water pistols and things like that. One night it was just pandemonium. People were throwing water and Bart Stokes came into the studio and he had a bloody fire extinguisher in his trousers. These water pistols started and Bart just pulls this thing out and goes ... 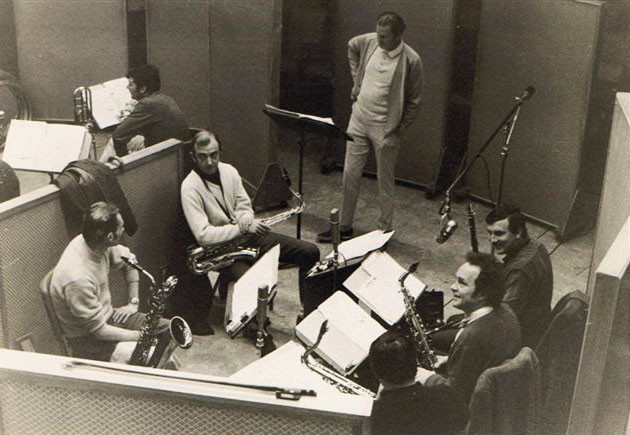 The reed section of a NZBC radio jazz band pre-recording a session in 1970, in the 1ZB Radio Theatre. Colin Martin has the saxophone on his lap, centre. At the far right is Tony Baker, with Bob Gillett beside him. Standing is band leader Dale Alderton. - Photo by Bruce King

McGough, Thomas’s fellow trombonist, got his break into the radio-band club at the same time as Bernie Allen, when two musicians got sacked by Crombie Murdoch for “bad behaviour” probably like that described. Before that they thought it took a death for a chair to become vacant. “I was a little daunted at what I was up against," said McGough. “Later, lead trumpet player Lou Campbell told me that getting the first call was hard, but you then had to impress sufficiently to get a second and third call. It could still take years to become an established member of the radio band. The radio band system was that the musical director was changed every 13 weeks, and in theory, a different band was engaged. However the reality was that once in one band leader’s band, you were almost always in every other radio band as well.”

As a long-time head of the Musicians Union, negotiating for the players’ rates and conditions, McGough was in a position to see why the system faded away.

In his memoir, excerpted at AudioCulture, he writes, “In those days Broadcasting was very public service in attitude, and it must be noted now that they could well have pointed out that it would be hugely cheaper to put on an LP of the Glenn Miller band than record and broadcast a local radio orchestra.

“But they held the belief that as a public service they had a duty to local artists, and as much as they could they lived up to that. Light orchestras, drama, jazz groups and recitals from classical singers and so forth were regular staples on radio during those years. Of course immediately they changed the structure and ‘profit’ entered the broadcasting language, all that ceased. No more radio orchestras, or anything of the kind.”

Through the 1960s the commercial radio stations would adapt to pop fashions by catering to the dominant market, teenagers. Occasional pop bands such as Glyn Tucker’s Gremlins got the chance to record in the Radio Theatre. 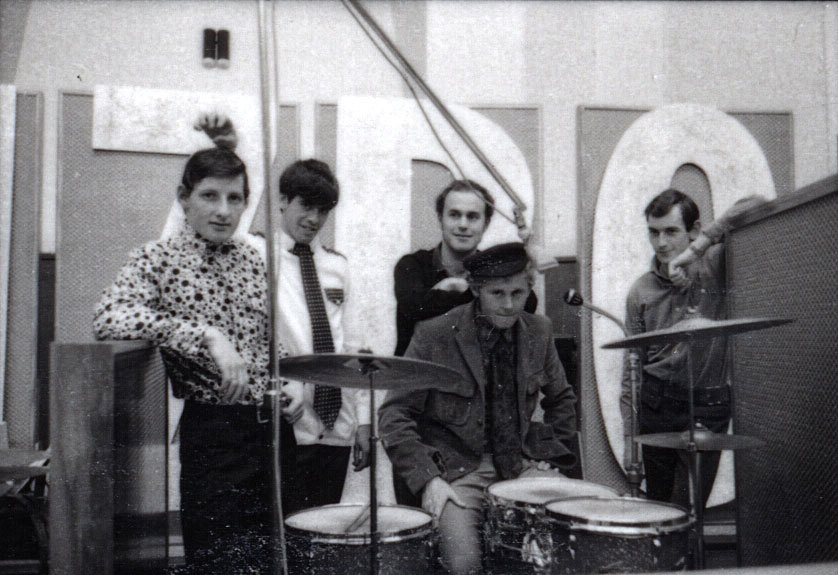 The Gremlins at the 1ZB Radio Theatre, Auckland, during the recording of the radio show Popalong Special in 1967.

The radio band system also evolved, with broadcasts no longer being live in front of an audience, but pre-recorded, with atmosphere sacrificed for perfection. About a decade after the demise of the radio big bands, television paid tribute to the era with the series Radio Times in the early 1980s. It was fronted by Billy T James – a Māori showband veteran – but used many of the jazz musicians who had been there in the 1950s. Standards ruled, both in quality and in song choice.

The Radio Times sessions of 1980-83 – filmed in front of an audience in the brick 1YA studio at the top of Shortland Street – were a nostalgic throwback to the Radio Theatre’s Art Deco heyday. The unchallenging arrangements suited the Saturday night TV audience. More at the cutting edge in the last days of the Radio Theatre was a session organised by Frank Gibson Jr, featuring five drummers on five drum kits. 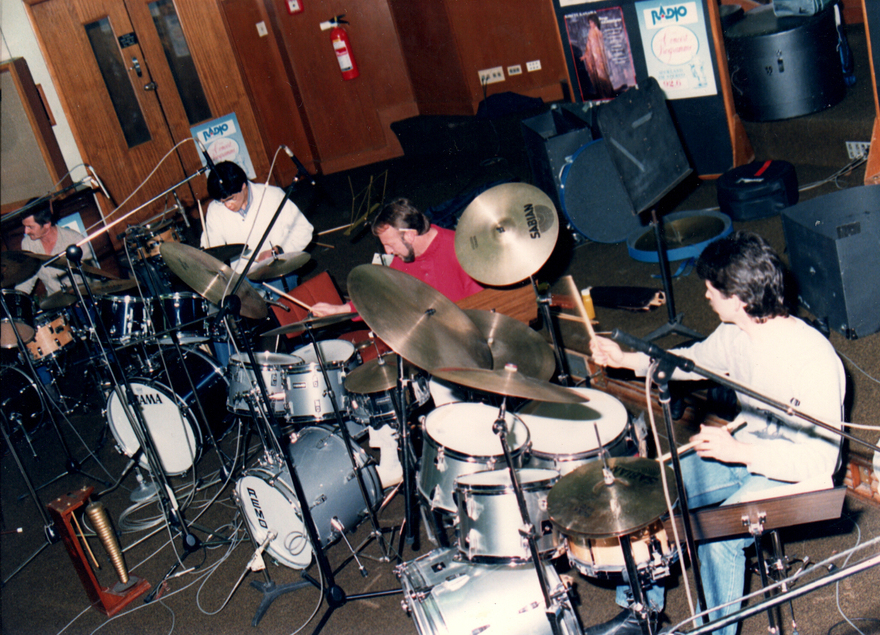 A five drummer session recorded at the ZB studio in Durham Lane, Auckland in the mid-80s - Frank Gibson Jr. collection

For five decades, those who worked there – on the stage or in the control rooms – thought they were working in a temple of sound. Among those who responded to part one of this story were three musicians’ children – those of Tony Baker, Neil McGough, and Jim Warren – who remember going to rehearsals half a century ago, frolicking on the grand staircase, and marvelling at the facilities. All three would find a career in music. For so many, the experience of witnessing music-making in the 1ZB Radio Theatre was pivotal.

Even appearing in a corny talent show such as Have a Shot in the late 1950s provided a memory to last a lifetime. “I sang there in Have a Shot, I sang a Buddy Holly number,” Gil Burney wrote to AudioCulture. “Those were the days, and yes – I was shot. I had the late Red Hewitt backing me on guitar, he entertained the audience while they decided who the winner was.”