f t
For every band who crawl on all fours, bleeding, towards fame and some form of fortune, there are a hundred Couldabeens. The Cartilage Family coulda been a Couldabeen.

They were only with us briefly, a band with no named personnel on Bob Scott’s Dunedin Band Chart, above The Craven A’s and below Red Orchestra. It was the end of 1982. Shayne Carter had Bored Games behind him; original Chill and original Clean member Peter Gutteridge was bandless; and Lesley Paris and Kathy Bull (now Francisca Griffin) were in the early throes of being Look Blue Go Purple’s rhythm section.

“I lived at 772 Cumberland Street with Graeme Downes,” recalls Carter. “Peter was next door with Terry Moore and Kathy and Martyn Bull. He wrote ‘Born in the Wrong Time’ about my other flatmate at 772, who we’d carry ceremoniously around the house when he was rigid like a plank, comatose on datura.”

“I had begun learning guitar, though my repertoire at that point consisted of the theme from the pinball machine at Big John’s Takeaway up the road, and a version of ‘God Defend New Zealand’ heavily inspired by the countless viewings of ‘Star Spangled Banner’ at your place (though I forgot about the notes and pretty much concentrated on the feedback made possible by the excellent sustain on my Alron combo amp). I learnt more about feedback than notes early on. Graeme however showed me D and a couple of other chords and I began writing using rudimentary chords after having previously written all my songs on one string.”

“I was a little cub reporter at 4XO which I hated. That did mean however a reconvened Bored Games got to use their studio – and programme director – to record our EP Who Killed Colonel Mustard. Apart from that and a short-lived trio in 81 with my 14-year-old cousin and Jeff Harford – the appallingly-named Sparkling Whine – that was my musical history.  Peter and I began jamming. We busked a few times in George Street. ‘Bad News For Jesus’  (“God got married and had another son”)  was one of Peter’s early one-chord ones that we belted out for a generally unappreciative Dunedin public. Kathy and Lesley were mates, and Lesley was part of the Kaikorai Valley High School crew I’d known since I was 12.”

The early Dunedin bands often played in public before they were quite ready, as the seasoned musos from my own era were always quick to point out.

The early Dunedin bands often played in public before they were quite ready, as the seasoned musos from my own era were always quick to point out (“These kids are making RECORDS already?”) but Cartilage Family practised quite a lot before their first gig.

Lesley Paris, sitting in her manager’s office at Otago Access Radio, pieces together her memories. “The name came out of Shayne and my mild fascination with TV’s faux family band, the Partridge Family. I think Shayne may have had a poster of David Cassidy on his bedroom wall at Caldwell Street when he was younger. Or was it Donny Osmond? This is what old age is like, doubting memories …”

“But I remember it was a very interesting band to be in,” says Paris. “Two idiosyncratic songwriters trying out songs like ‘Born in the Wrong Time’ and ‘Can’t Find Water’ and allowing me to play whatever wonky drum-beat I felt like. And letting this girl in Dunedin channel Mitch Mitchell when we did ‘Purple Haze’. We had some really great practices in the basement of the EMI Shop, 261 George Street, despite the elongated tuning breaks. I got a lot of knitting done. Ahhh the 80s ... I’m so fuzzy on details.”

Francisca Griffin remembers the knitting too. And Peter. “I remember being ecstatic at learning and playing ‘Purple Haze’. And that, at some practices, there was so much tuning and discussing song construction that LZP started bringing along her knitting. I would sit on the bass rig, bored out of my skull. Peter was very particular about how his songs would be played by us stringed instrument holders. Dunno if he ever tried telling LZP how to play drums.  Once we were learning ‘Can’t Find Water’ and Peter decided my bass line was all wrong, he tried to get me to play something more to his liking. Shayne came to my rescue, telling Peter, ‘Leave her alone, let her make up what she wants’ – which, by the way, did not suck.”

The Cartilage Family made their debut, inevitably, at the Empire, though interestingly, none of the remaining three – Peter Gutteridge died in 2014 – remembers if they played once or twice. They played twice, 10 and 11 June 1983, supporting Bill Direen’s Above Ground. I recorded the second performance, Saturday night.

“I can’t remember much about the Cartilage Family, but even then it was obvious Peter was an excellent songwriter,” says Carter. “I remember the practices. Gutteridge and I tuned a million times. I don’t know why we didn’t have a tuner. Maybe they hadn’t been invented. I had a distortion pedal that broke the first time I stepped on it. I took it into Bristol Piano and the dude said ‘It’s not a bloody trampoline, mate’ – thus sparking off a lifetime of being condescended to by music store staff. The band name being a play on our surnames was a total fluke, as we just wanted a joke twist on the Partridge Family. I think it was a nod to the dual-gender nature of the band.

“I’m not sure why we didn’t go longer. I have a vague recollection of Peter complaining about my songs having too many chords. He was already heading to his one-chord mantra thing.”

Peter took his four iconic Cartilage Family songs to The Great Unwashed . Lesley and Kathy became two-fifths of Look Blue Go Purple, and Shayne joined up with former Bored Game, Wayne Elsey, and a Casiotone drum machine, Herbie Fuckface, as the Doublehappys.  One of the first things they learnt was ‘I Think I Love You’ by The Partridge Family.

The Cartilage Family, as you can hear from the mono National Panasonic dictaphone recording, were pretty damn good. They had attitude, they were profane (Kathy Bull swore at everyone and everything, even parking meters, while Carter’s lyrics would have put him in jail in 1983) and they had brilliant material. As lost songs go, Carter’s ‘Fun Fair’, ‘Stench’, ‘Out On A Limb’ and ‘Shallow Shallow’ are as good as lost songs ever get. It was a shame they didn’t haul this unique pair of songwriters further into the fire. Coulda been amazing. 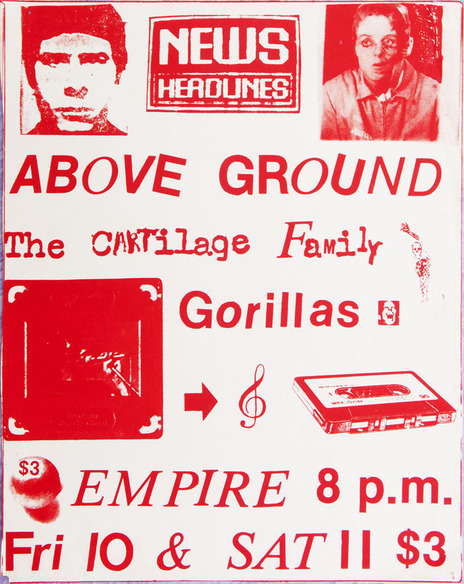 Above Ground, The Cartilage Family and Gorillas at The Empire 1983