By the early-1980s Auckland student station Radio B(osom) had transformed itself into bFM, become a legal FM outlet, and a potent force in the city’s broadcasting. Where Auckland’s pop stations focused on a strict diet of US Top 40 hits – Barry Jenkin being binned demonstrated Radio Hauraki’s absolute refusal to engage with rock’s new, underground energies – bFM led the charge and was winning ever more listeners.

What would station manager Debbi Gibbs do next? Well, how about launching the station’s own, in-house magazine? And so she did, birthing The Book of BiFiM in 1984, a gloriously back-to-basics monthly magazine that led the charge for post-punk music. 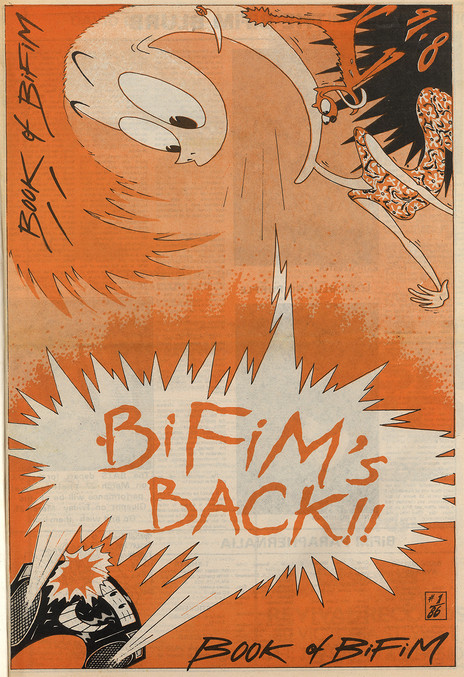 “Alternative Music Across Auckland” was both the radio station’s and the magazine’s semi-official byline and BiFiM certainly stood as the foremost Kiwi publication for such. Amazingly, for a free magazine that never compromised in championing the left field, BiFiM lasted for almost a decade, outgrowing its inky b&w origins and clunky name to become the very stylish, glossy Monitor magazine (while still free and part of bFM’s operations).

BiFiM published plenty of engaging, often irreverent journalism, championed local bands, many of which were otherwise unlikely to get a look-in, and captured the youthful energies of Auckland’s student/nascent hipster scene.

BiFiM’s early years exuded energy and a slapdash do-it-yourself aesthetic (very akin to Flying Nun’s approach to recording/promotion – the closeness emphasised by Chris Knox’s cover art contributions) before blossoming into a more mature, if still forthright, publication. Flying Nun bands dominated the local content: Straitjacket Fits appear to have been BiFiM’s favourite band (understandably: Gibbs managed them) and the arrival of Headless Chickens signals how, once based in Auckland, Roger Shepherd’s fledgling label would pursue a more abrasive rock culture. 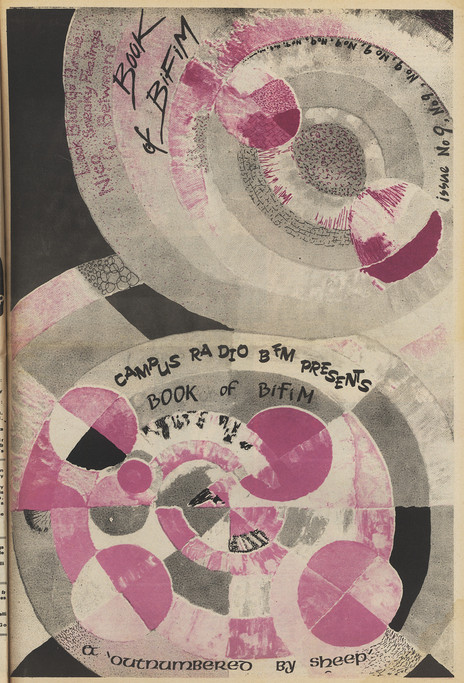 Looking though old issues I find all kinds of odd memory jogs. The listings and coverage of local bands includes several of whom I have no recollection (Joe 90, Dead Famous People, National Anthem, Olympic Sideburns) even though I was a diehard gig goer. Simon Grigg discusses his newly opened club, The Brat, pointing the way to a nascent Auckland club culture. And, of course, there’s the links to bFM – in those pre-internet days BiFiM was the best way to know who was on when. The radio shows schedule even features my kid brother, Neil Cartwright, hosting the Resurrection Punk Show, 8-10pm on Thursday nights (and writing reviews of new Hüsker Dü and Butthole Surfers imports for BiFiM, back when US hardcore was the cutting edge). 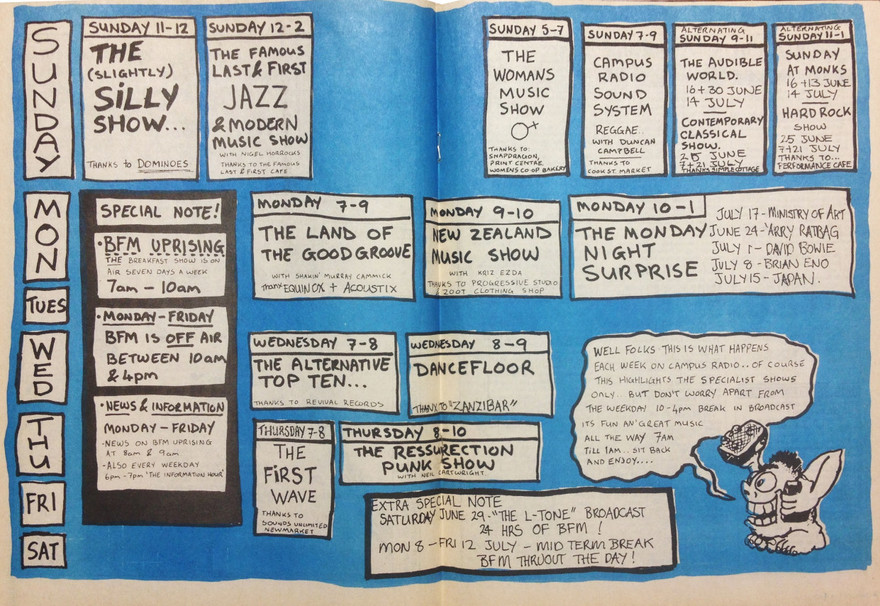 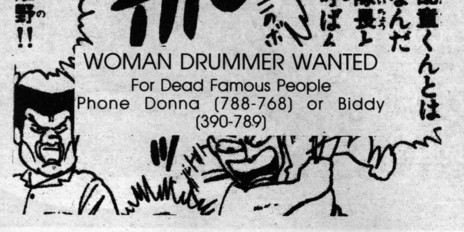 BiFiM’s adherence to alt-rock was both its strength and greatest flaw. It ignored Māori/Polynesian music making in Tāmaki Makarau/ Auckland – there’s no coverage of Herbs, Ardijah, Dread Beat & Blood, or Sonny Day for example. Also, there’s nary a mention of older Pākehā musicians such as Midge Marsden, Brazier & McArtney, Trudi & the Exceptions, Rick Bryant, et al, although all were active around Auckland in the 1980s.

To BiFiM’s credit they did interview Merata Mita about her 1988 film Mauri. There’s also an excellent feature on Terence O’Neill-Joyce, one of the pioneering Kiwi record men who ran Ode Records for decades and issued more Polynesian recordings than any other NZ label. He describes how Prince Tui Teka kept Ode afloat. Sadly, BiFiM never interviewed the Prince.

A fascinating feature by jazz historian Geoffrey Totton on the arrival of jazz and blues in Auckland after the end of World War One details how Auckland’s first dance club was the Dixieland Cabaret on the corner of Queen and Waverley Street. After opening in 1922 it quickly became so popular the owner opened a second Dixieland at Point Chevalier. At these unlicensed venues patrons would smuggle in their booze and dance to local musicians playing, jazz, blues, country and Hawaiian tunes. Totton also mentions one Marge Greening, a saxophonist, leading her own all-female jazz band in 1932. Another insightful feature has Kevan Moore, the producer of 1960s-era Kiwi pop programmes, discussing how he developed and shaped the likes of Let’s Go  and C’mon (with Pete Sinclair as the immaculately groomed host). The likes of Rip It Up and In Touch never ran such historic features. 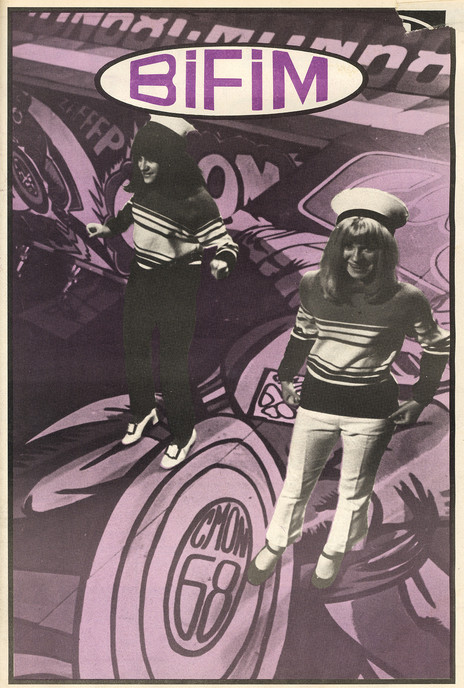 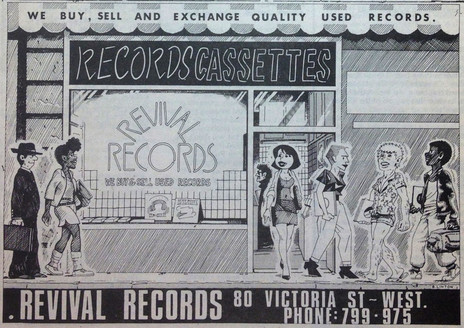 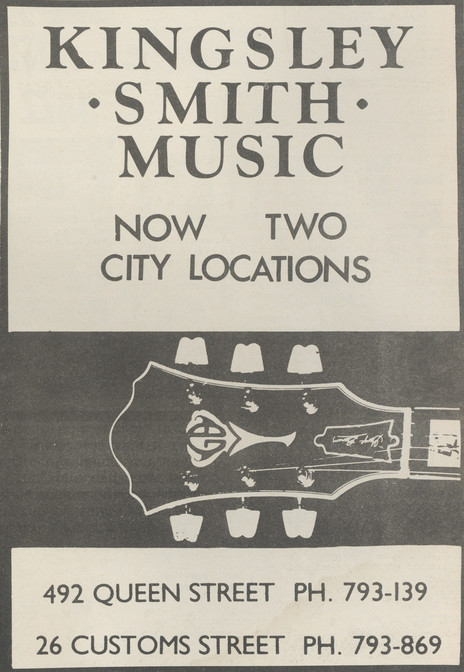 An advertisement for The Gluepot makes me swoon in memory of great nights spent both upstairs and down at the 3 Lamps Mecca, while an ad for doomed music festival Neon Picnic reminds of a time when there were no music festivals in New Zealand. 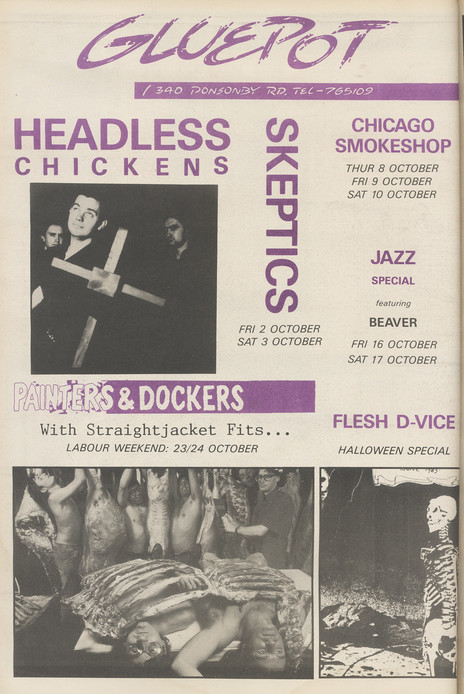 BiFiM documented Auckland’s student/alternative rock scene as it developed. The magazine’s increasing confidence reflected a city where there were fewer fights on the dancefloor yet more excitement and glamour. As with bFM it helped open up possibilities: respect to all involved.

“Initially I was writing, editing, typing all the contributions and laying the thing out on my bedroom floor. The station gave the magazine a teeny bit of seed money and then advertising paid for the printing. None of the contributors got paid – even the brilliant cover artists. There were no sub editors or designers. After the first issue I managed to talk Craccum into letting me use their dark room to print the photos and then, after the second issue, they let me lay out the magazine in there on a weekend. The contributions came from whomever I could beg or bully into writing something. 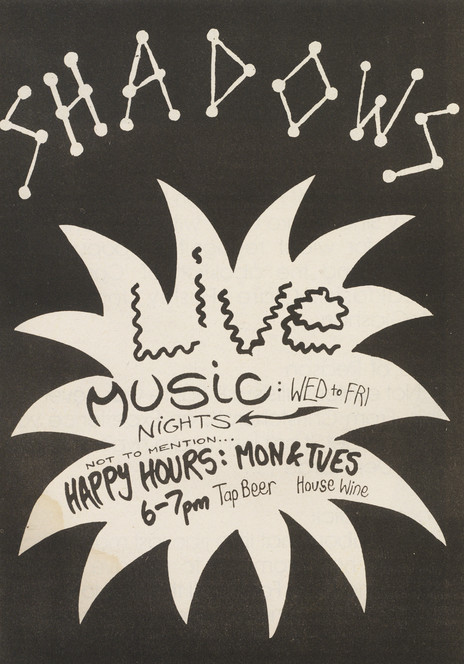 Shadows advert from Book of Bifim, 1987. 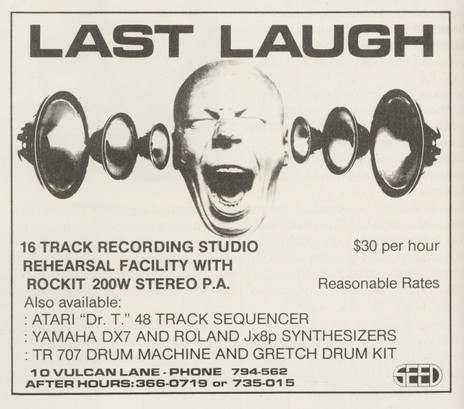 “BiFiM was initially intended as a marketing tool for bFM and a way to extend our engagement with both our audience and the local music scene. I was also promoting gigs and the gigs were meant to do the same thing – promote the station and engage our audience and the music community. I never saw it as a standalone magazine. Looking back on it is very funny: the typesetter would only do one shot at the body text so if there were any mistakes I had to cut it up and rearrange individual letters, and all the headlines are just my handwriting.

“Hardly any of them were given out on campus – Ian Dalziel distributed them mainly. I think he was distributing Rip It Up and/or Flying Nun and I would just add to his load. What a honey – no idea why he did that.”

“Debbi, who was the driving force behind the FM transformation, came up with the idea of an in-house fanzine to provide listeners with information such as on-air times and special show timetables, along with columns by DJs and reviews etc, similar to the station’s website today.

“At the time the AUSA’s once b-friendly Craccum editors had been replaced by a less enthusiastic team – it was an almost wholly political publication with some AUSA club info and had little interest in the local music scene. Our access to free publicity vanished so publishing our own news seemed the best plan. 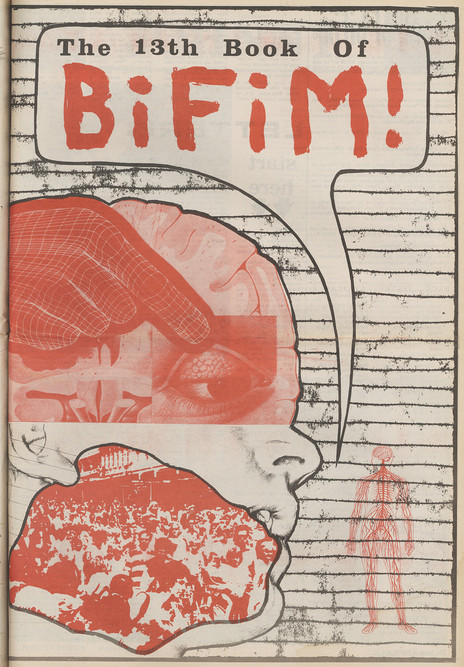 “Articles, photos and reviews were submitted mostly by station staff and special show hosts. Initially, we had no computers or even a typewriter and the first issues were planned and laid up all over the floor of Debbi’s flat. The big difference between BiFiM and Murray Cammick’s Rip It Up, besides the hand-written articles, was that RIU was publishing articles about a more commercial range of music. BiFiM was very local-content heavy with cover art by the same musicians/artists who were also producing covers and posters for local bands.

“BiFiM began developing with a lot of support from the bands, record labels, venues, cafes and clothing labels. It was basically a physical representation of what we were broadcasting.”

“I was at the time working at Rip It Up, living with Doug Hood, Chris Knox, Barbara and family at Hakanoa Street, also helping Doug with Windsor/Looney Tours and Chris with Flying Nun wherever needed. Debbi needed a hand with some of the basics of putting a print-ready mag together, I just answered her questions and helped where needed, I may have done one of the gig guides or show guides or some such. There may have been alcohol involved and deadlines – contiguous recollection may be sporadic and enhanced or dropped out altogether.”

“Not sure of the timeline but I’d been programme director and news editor and then had a stint as mag editor when it was decided to change the name to Monitor. I loved the original Chris Knox zine-era BiFiM – it probably became a bit bland under my watch, but was an outlet for a bunch of people, including myself, to have a go. It was all gut really, planning was never a bFM strength, all the cool stuff twentysomethings are into. It was pretty narrow and random probably, but the better writers gave their favourite acts a good push. It was a blast and I'm ever grateful for the opportunity and memories. The long weekends doing layout in the pre-computer age with a scalpel are definitely memorable. 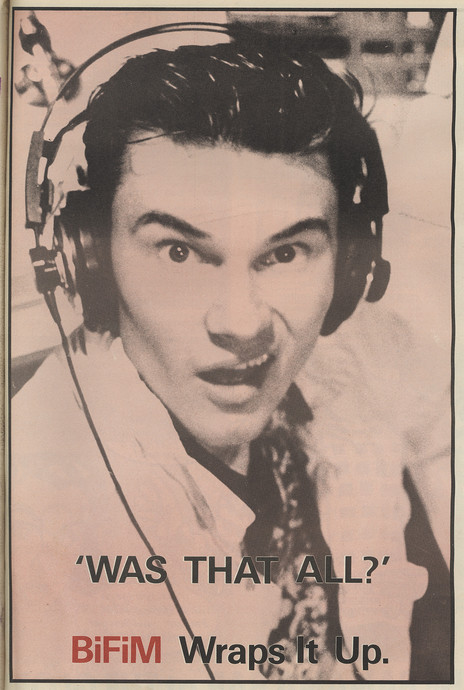 “Once, during a long layout weekend, a guy with a tattoo on his face that looked a lot like the word “fuck” done in a mirror, if you know what I mean, came up to the station and along to Craccum where we were laying out the mag, and said “are guys with Radio B?” We nervously said yes, and he handed me and a mate (I think it was Greg Johnson) $50 – our weekly wage at the time – and said, ‘this is for you guys. BiFM saved my life while I was in jail!’ In hindsight, I think he meant for us to give it to the station but I recall that we ate well that weekend and possibly bought some casked wine and weed. Fairhall River claret rings a bell.” 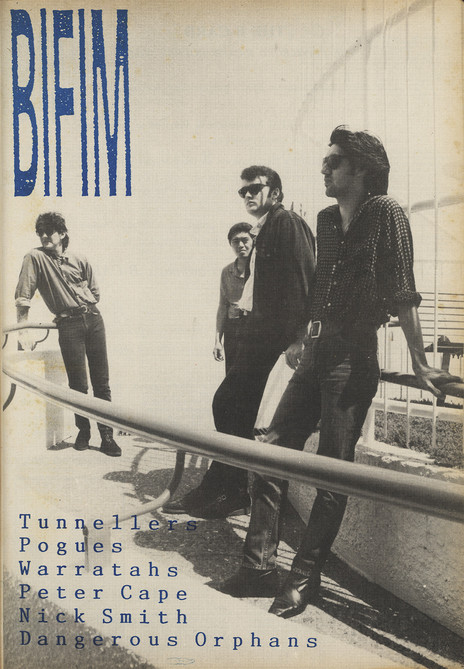 Ted Brown's The Tunnellers on the cover of Book of BiFim, 1987. 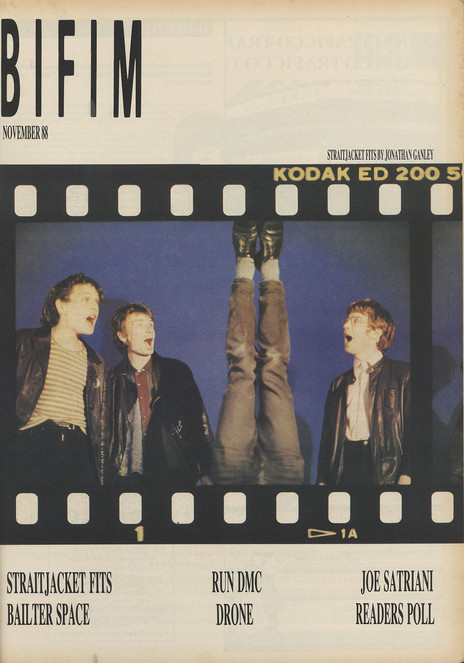 “In 1989 I was editor of Craccum. Our office was next door to 95bFM. Monitor was slick. Paul had done an amazing job with it. But, at the end of 1989, something went awry and he was pushed from the job. With my tenure up at Craccum, Simon Laan (bFM station manager) wandered down the corridor and asked me if I wanted the gig. Hell yeah! They were big shoes to fill. Paul really had set the bar super high.

“As the official mag of bFM we supported the station in any way deemed useful: ad crossovers, programme listings and all that functional stuff. I soon got to know who the regular contributors were and managed to persuade most of them to carry on under my auspices.

“Music, of course, was our main beat. In tandem with bFM we were a pretty good guide to what was happening in the independent, alternative scene. The mag had pulling power with the music companies so we were offered pretty good interviews ­– phoners with UK, US, or Australian musicians, plus of course NZ musos in person.

“When Liz Tan took over as station manager the magazine was seen as a luxury bFM didn’t need, not core business, getting too far out from under the station’s direct control. Certainly, various forces were lining up against us towards the end of 1991. Then it all came to a head when we didn't have enough ad income sorted for the first issue of 1992. That was not good. A little bird landed on my window sill one morning and passed on the rumour they were going to shutter the mag. Call me biased, but BiFiM/Monitor was a great mag.” 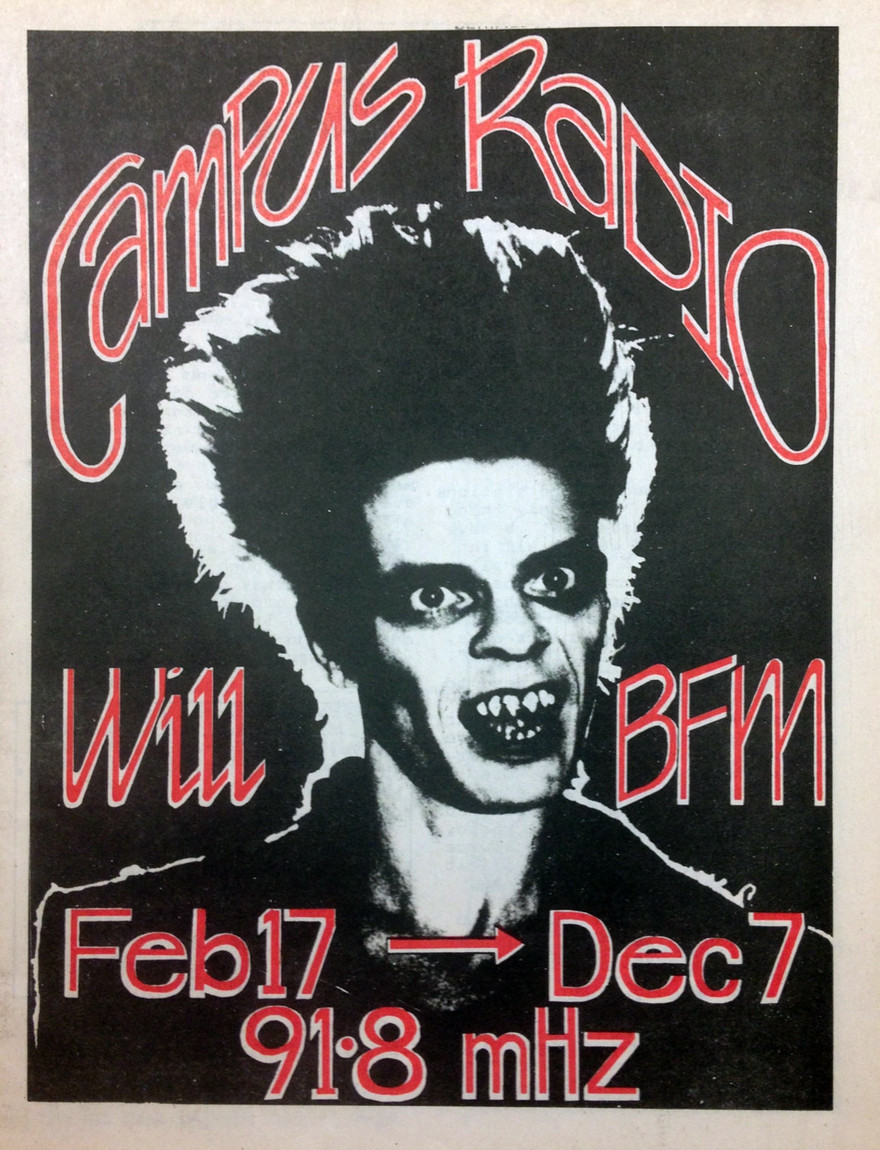 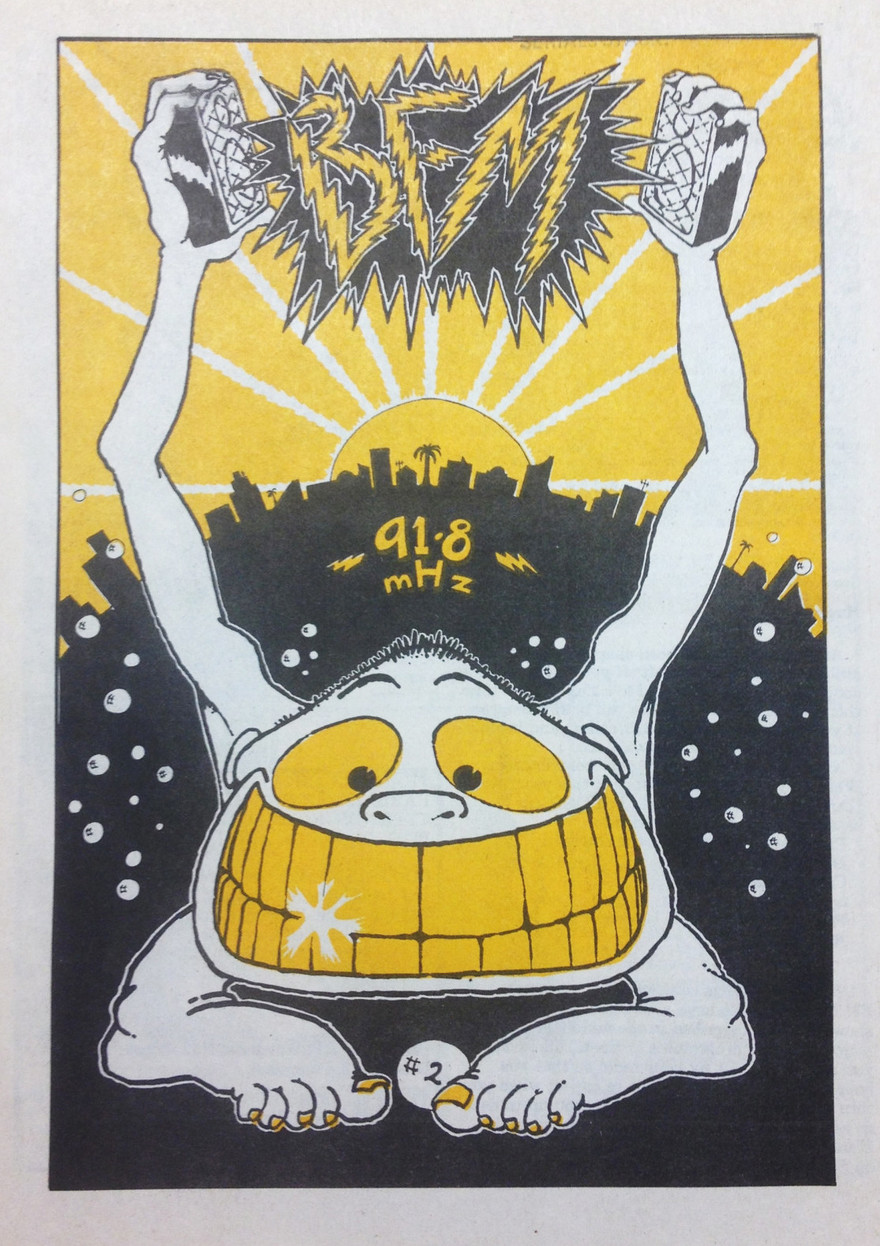 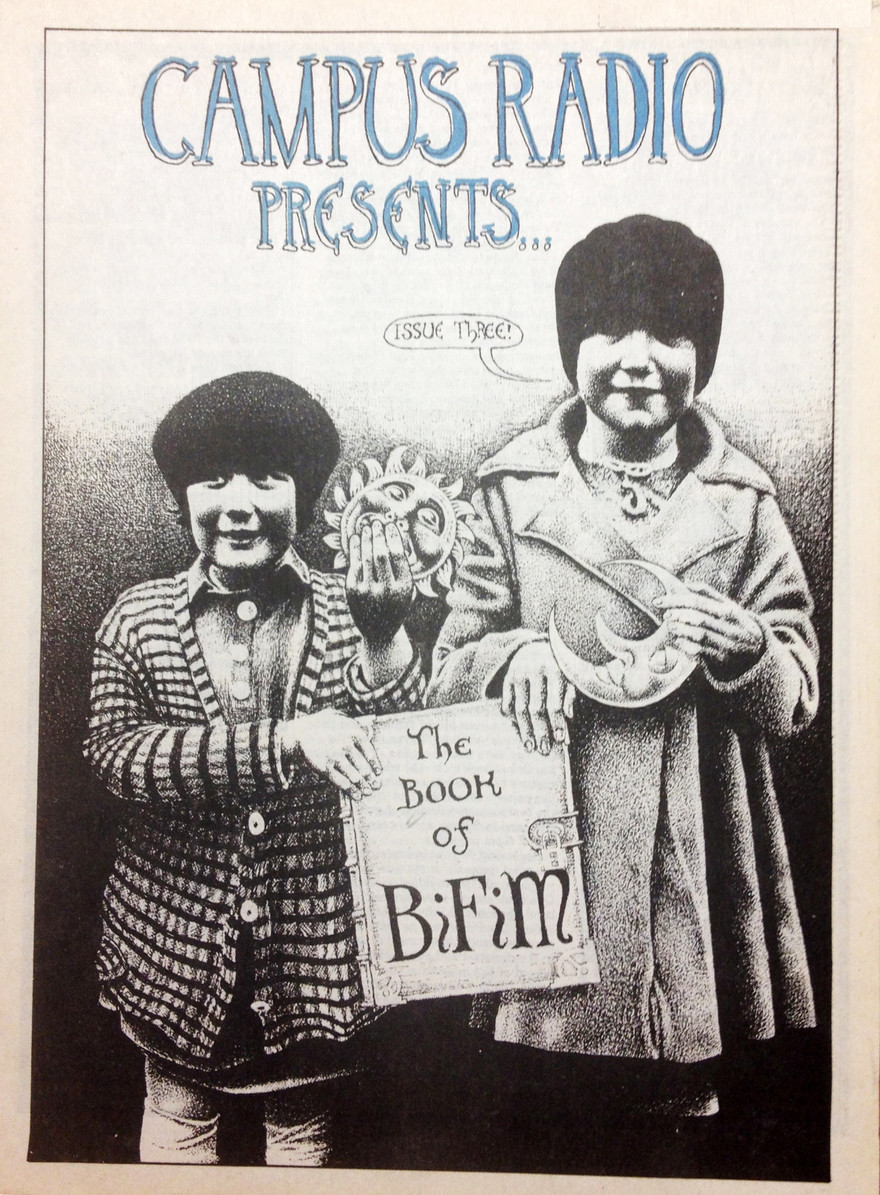 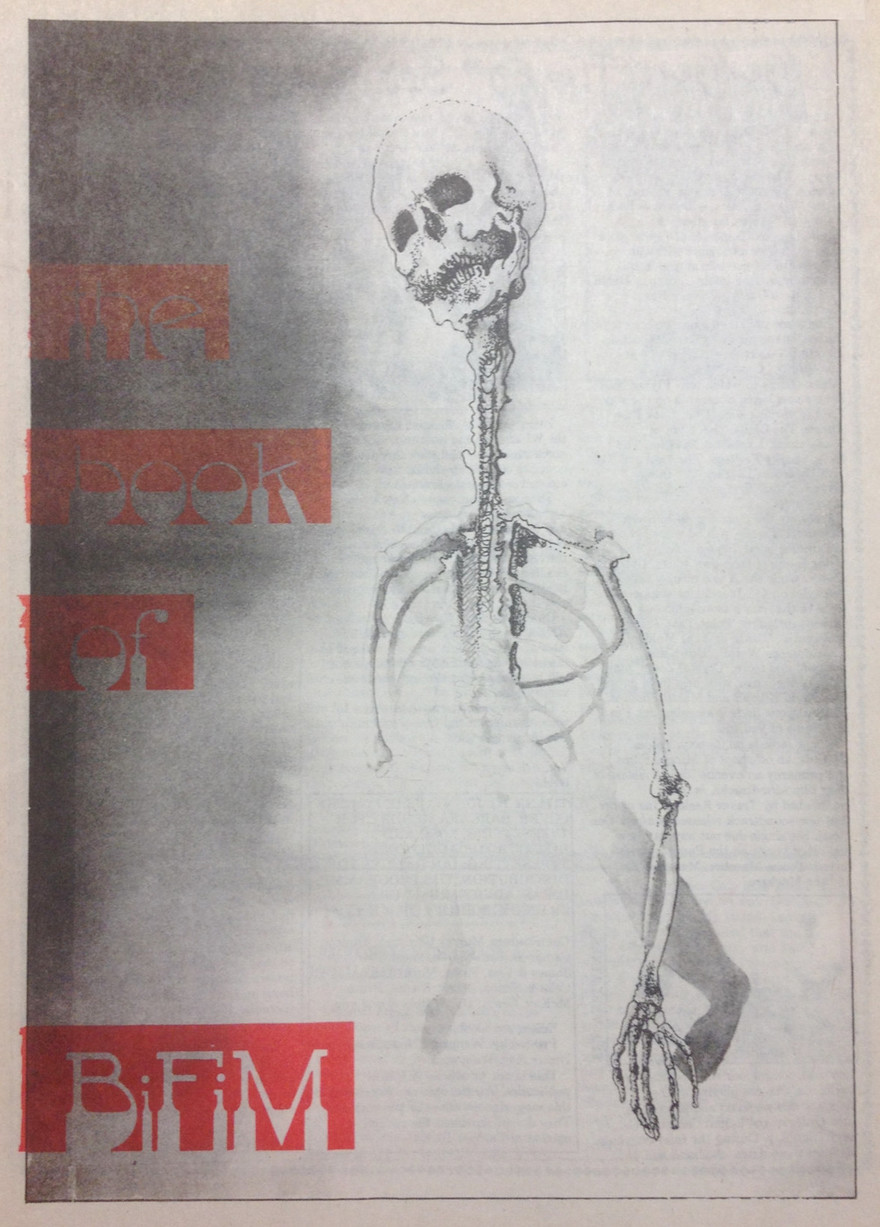 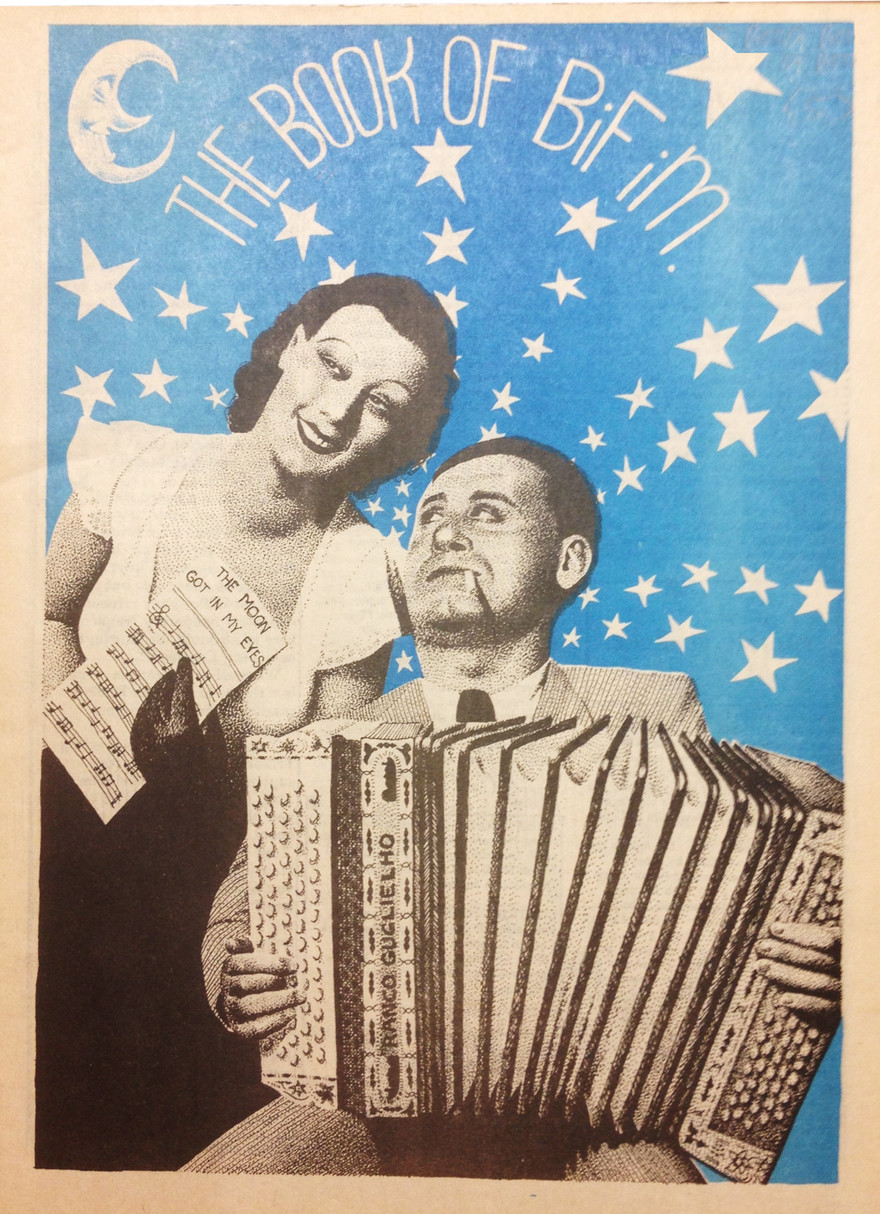 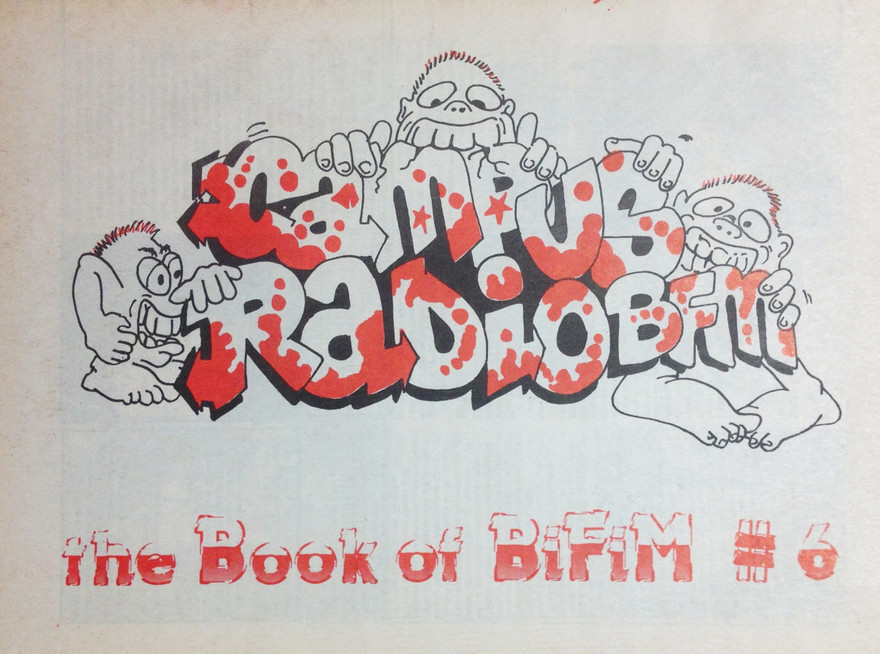 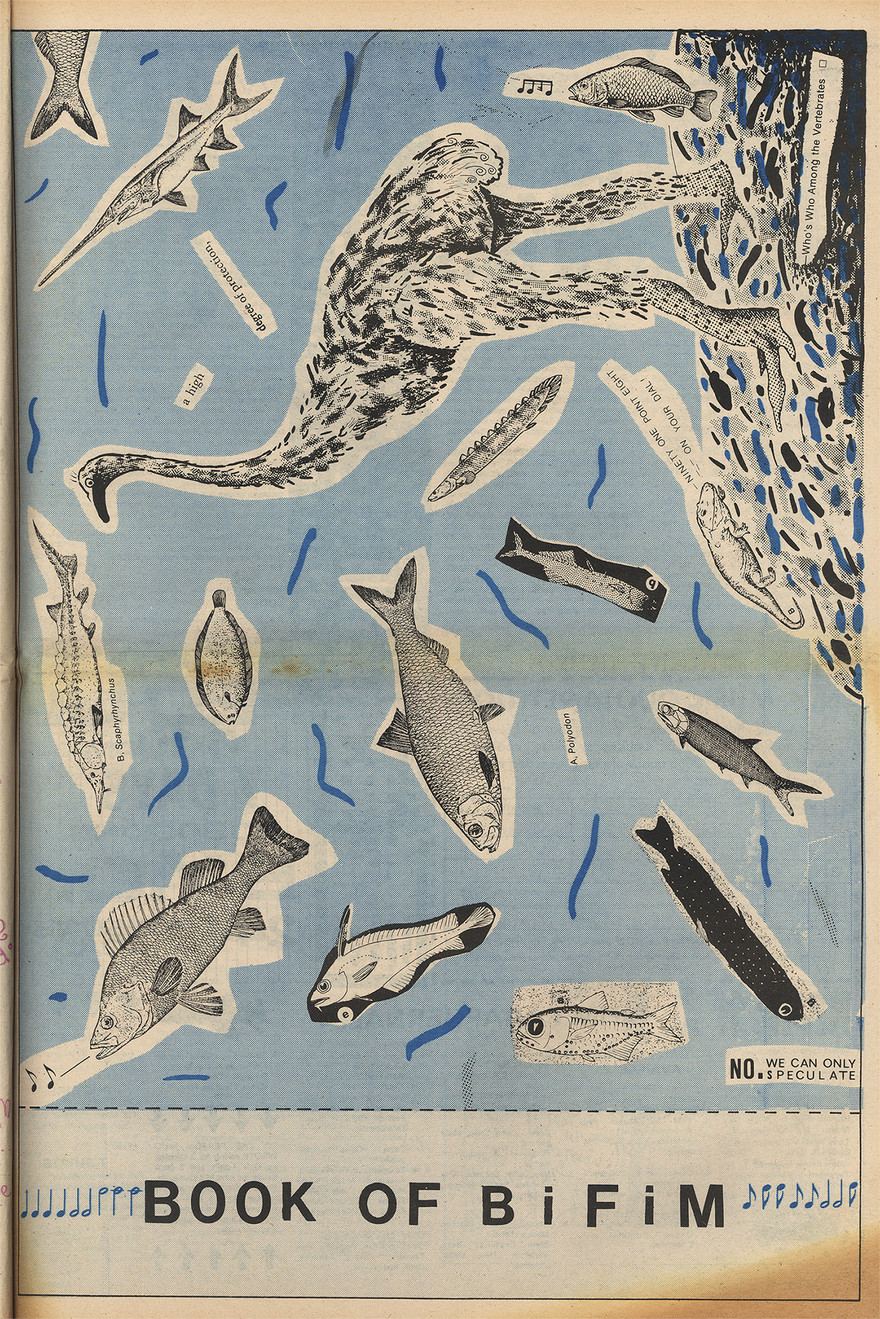 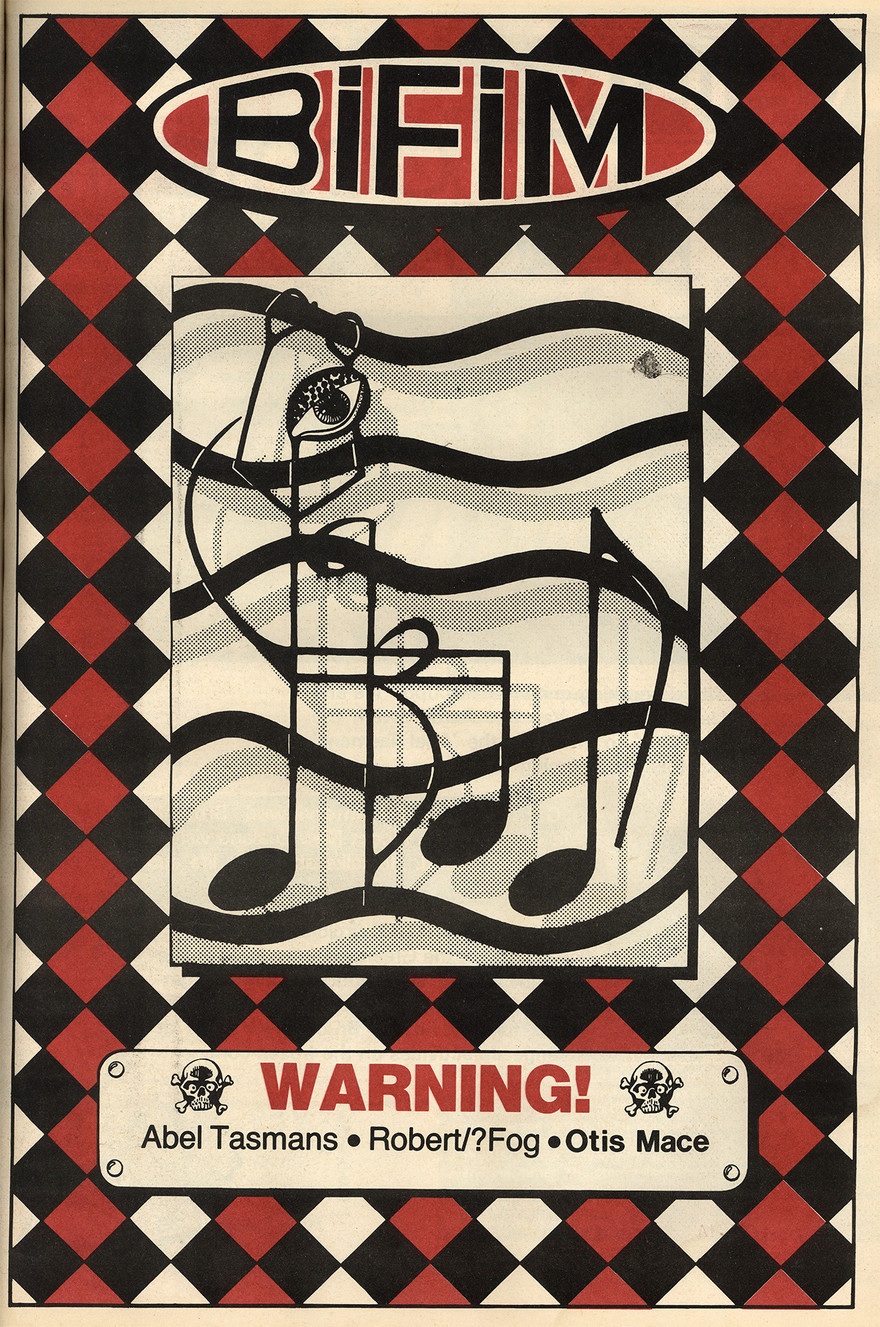 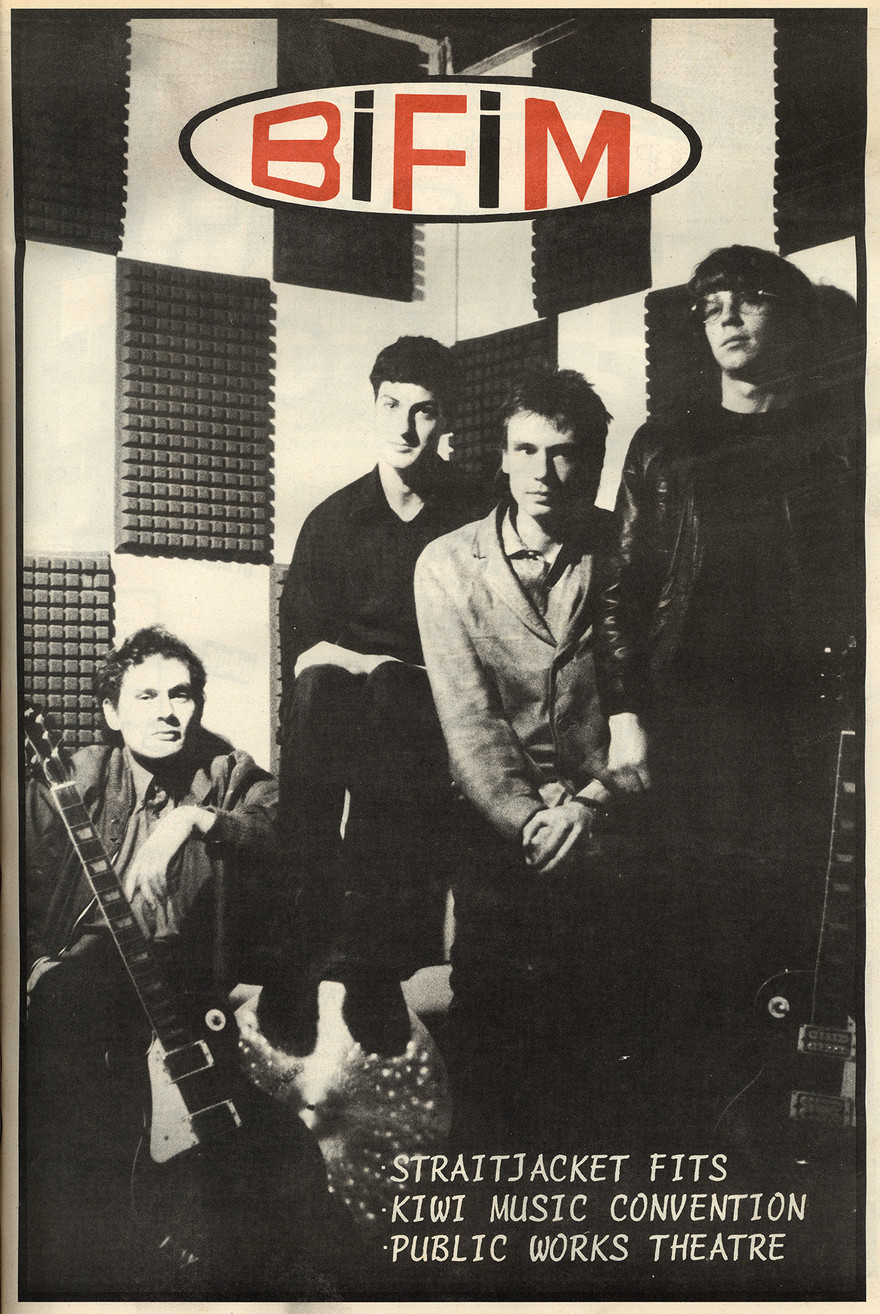 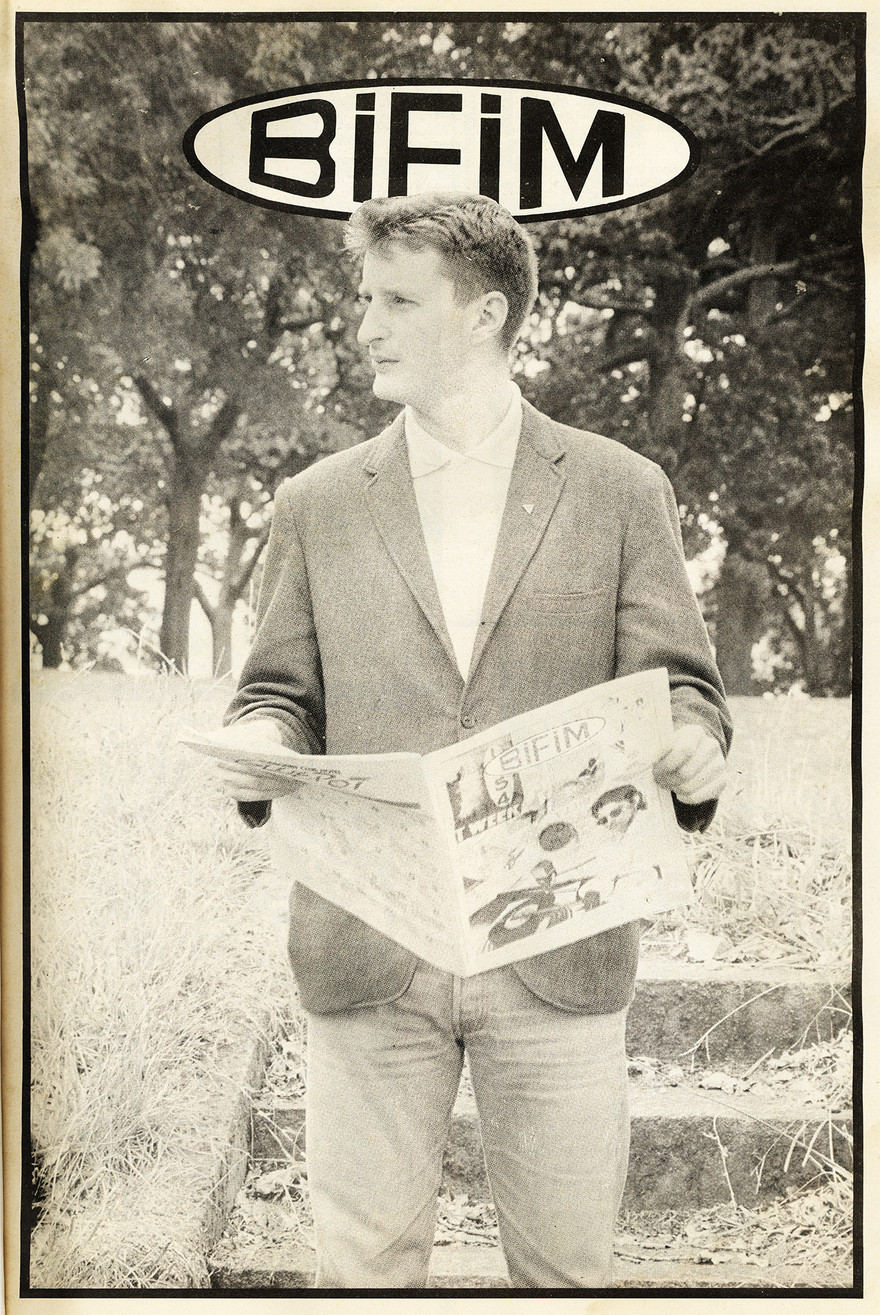 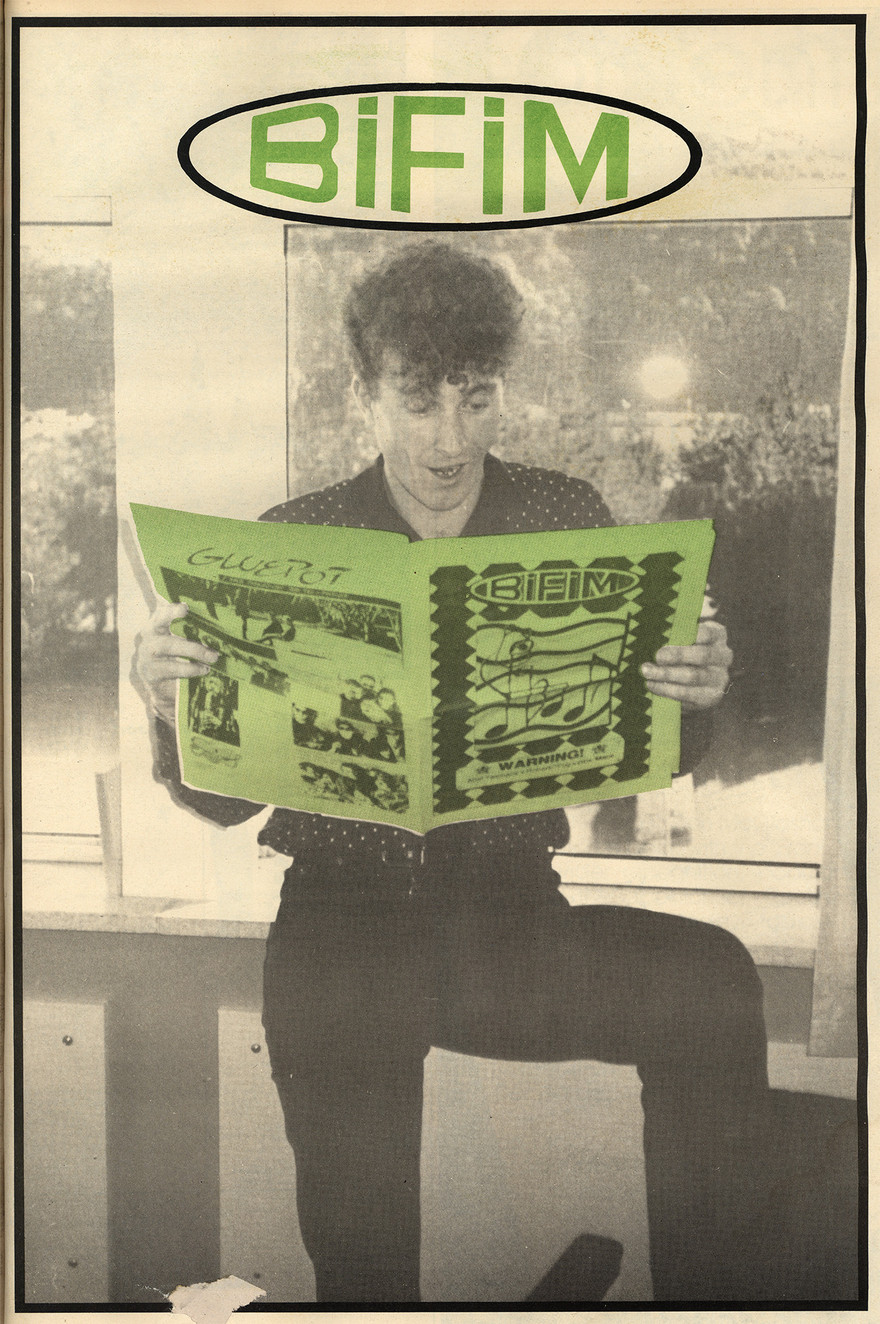 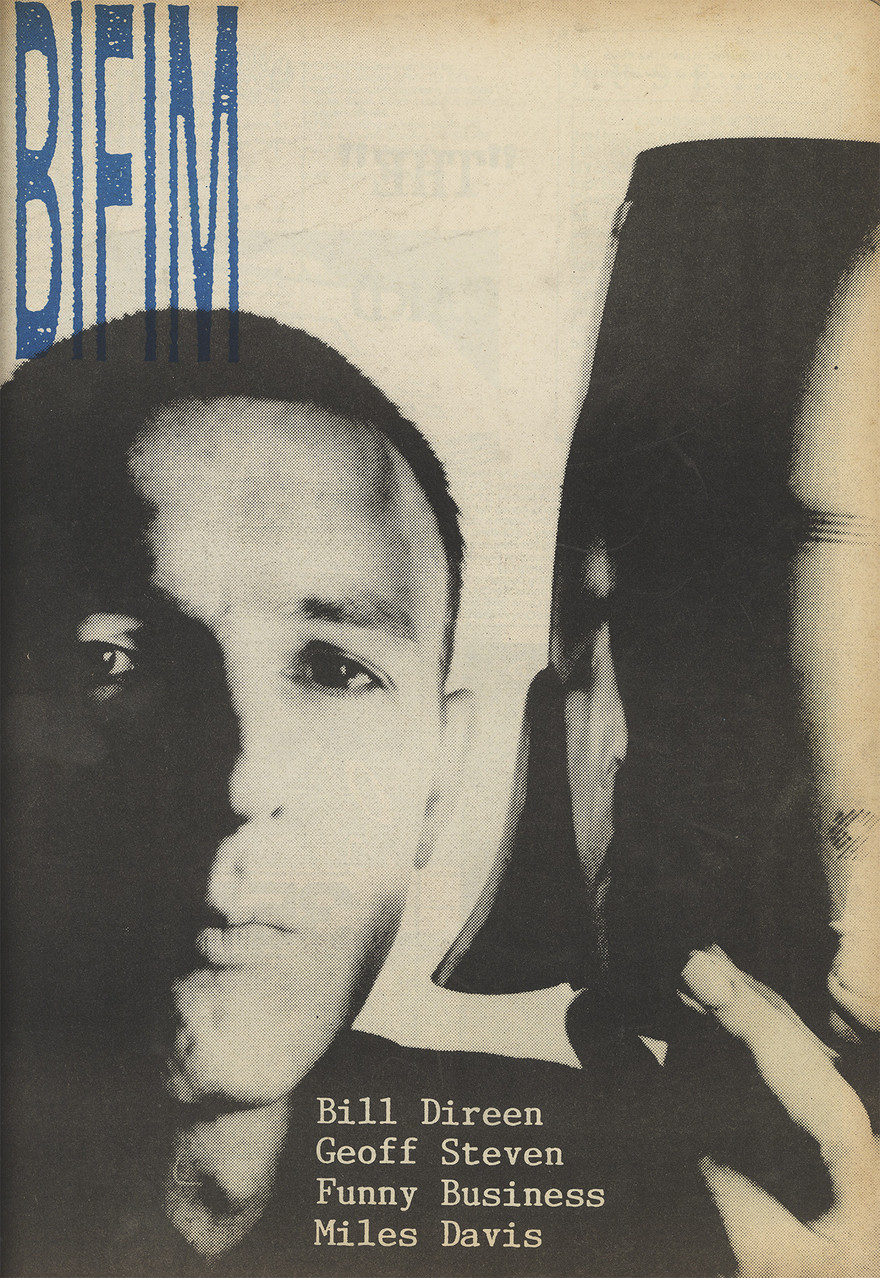 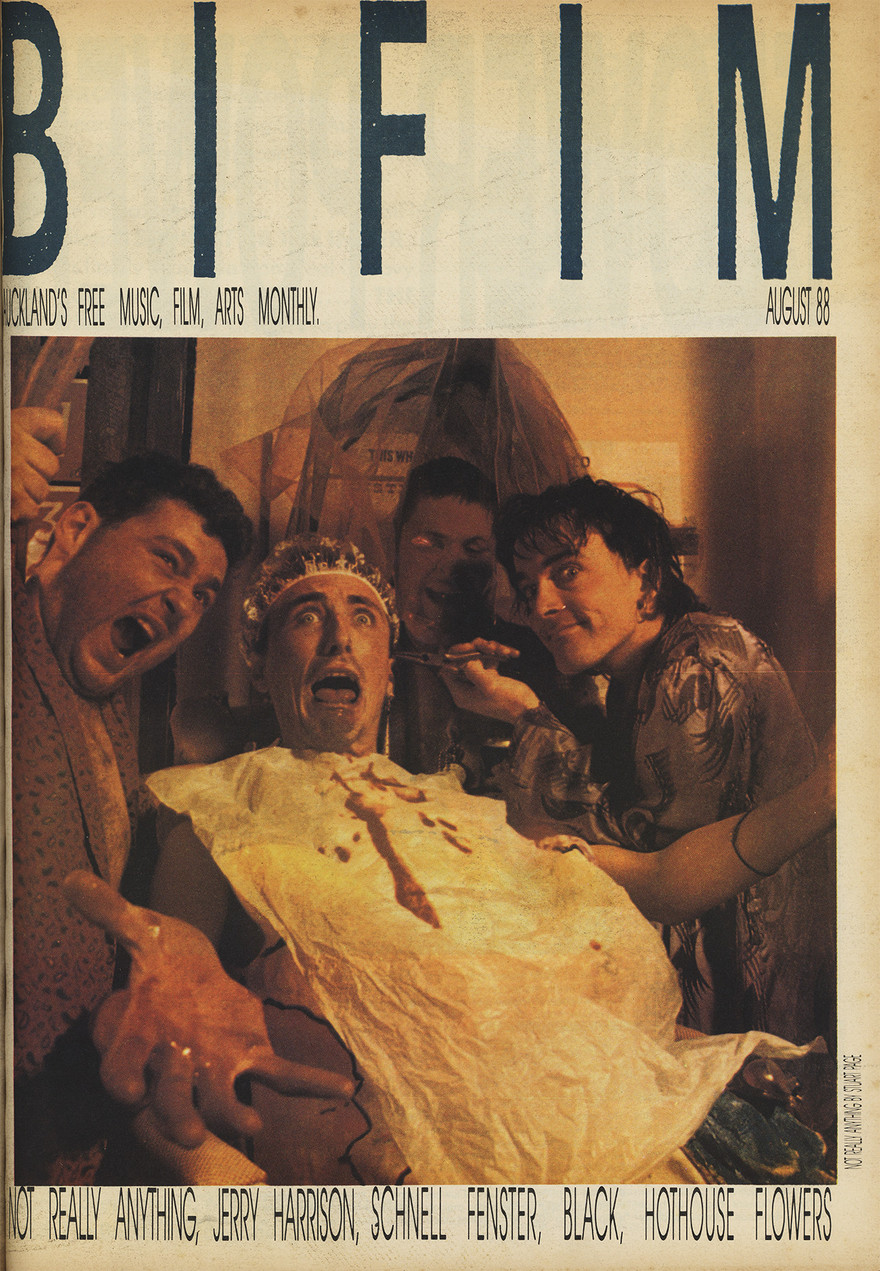 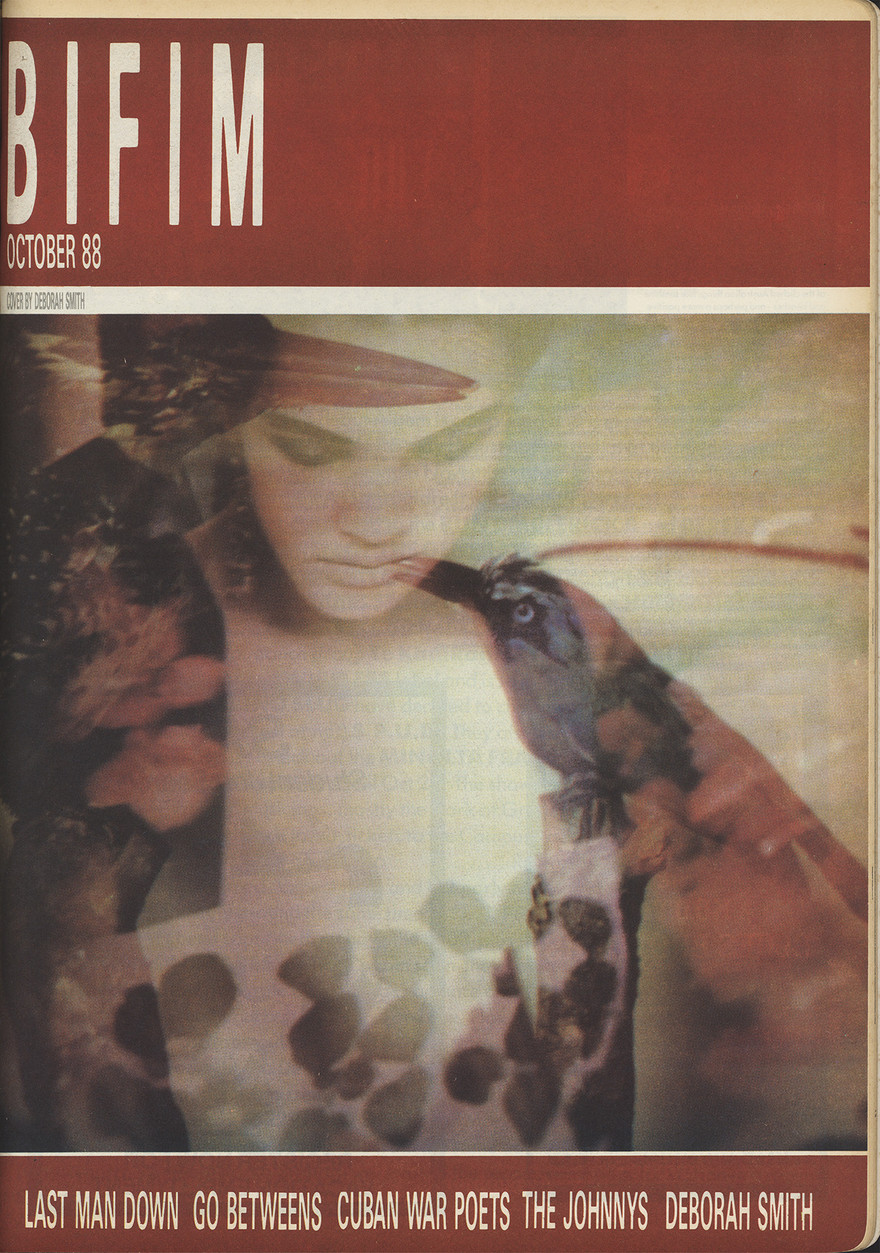 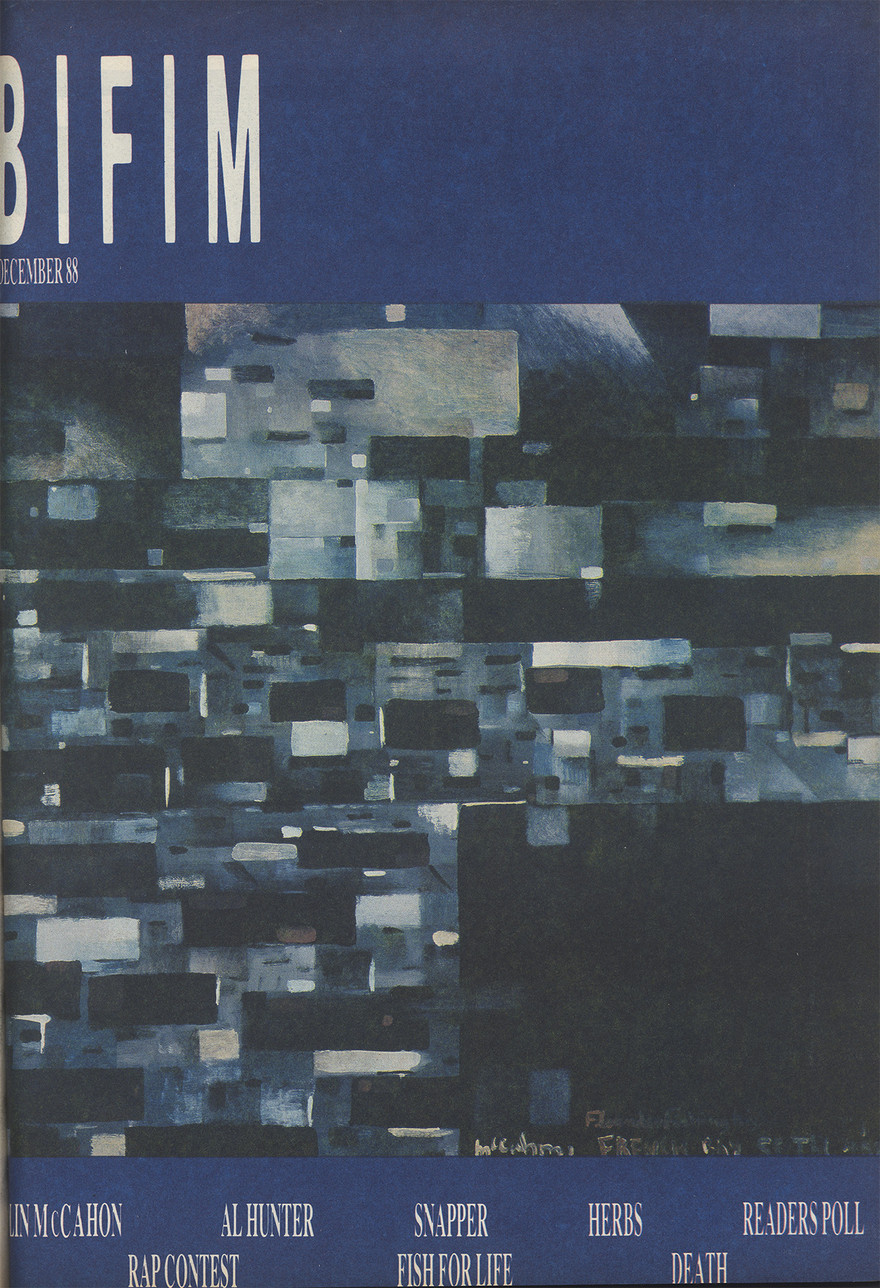