Auckland nightlife: the 1960s in colour

A selection of photos, mostly from the Rykenberg Collection at Auckland Libraries, that show some after-hours possibilities for adults during the 1960s. 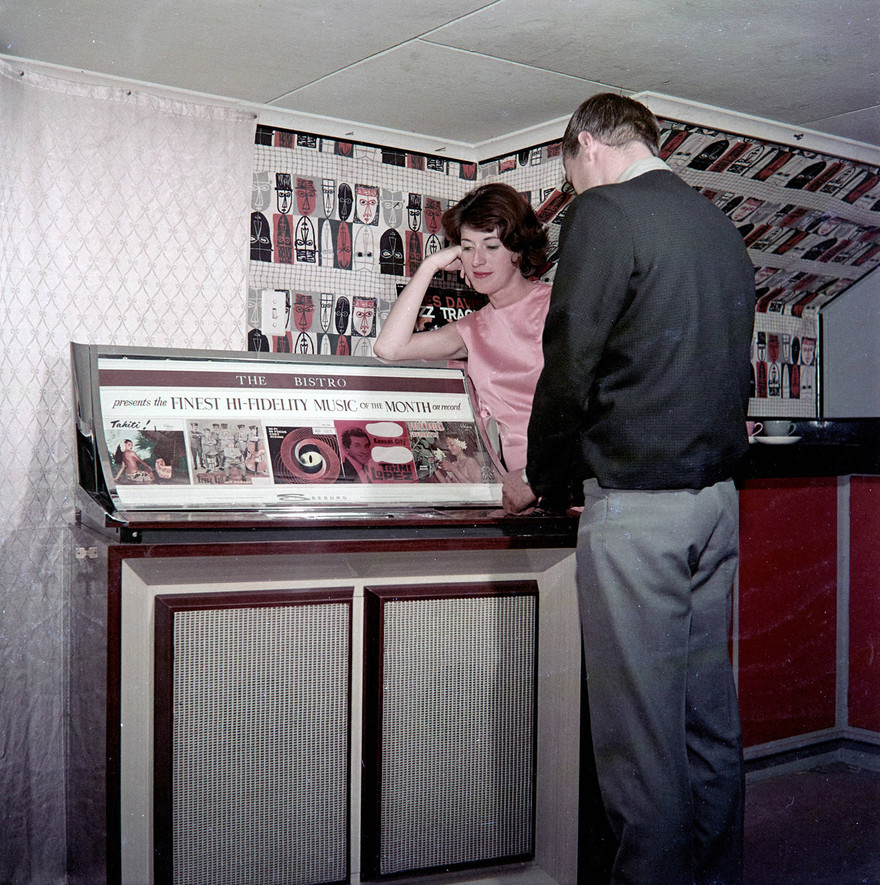 Chuck Berry said it best: “They had a hi-fi phono, boy, did they let it blast / Seven hundred little records, all rock, rhythm and jazz …” Famously revived in Pulp Fiction, Berry’s song ‘You Never Can Tell’ came out in 1964, the same year Rykenberg took this promotional photograph in an Auckland showroom. You can see that Pierre truly loves the mademoiselle, but she seems to have eyes for the Seeburg LPC1 jukebox, which was well known for its booming, reverberating sound, and of a size suitable for basements and rumpus rooms. Among the discs on offer are romantic music from the Pacific, and one of Trini Lopez’s party starters. 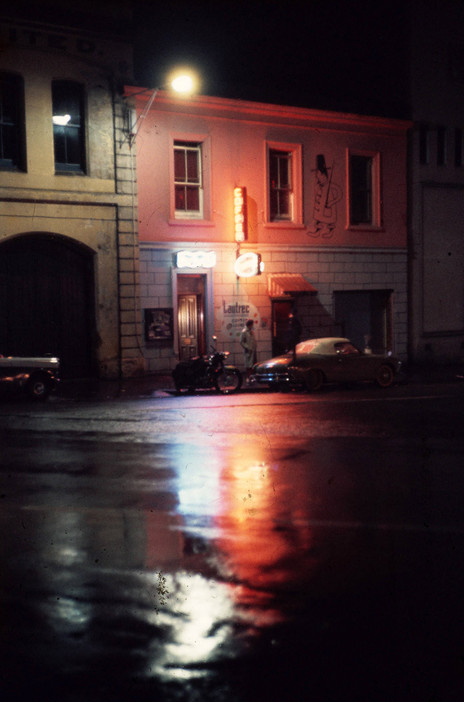 An evocative study of the Lautrec café at night in the early 1960s, on Lorne Street, Auckland. Upstairs was the Montmartre, a café run by Brian Taylor and striptease king Rainton Haistie, offering live jazz from the likes of the Mike Walker Trio. Lautrec was at street level; the location was later taken over by Barbara Doyle (of the Ranch House), who renamed it Carnaby’s. Situated across from the Auckland central library, a Korean restaurant is now there. 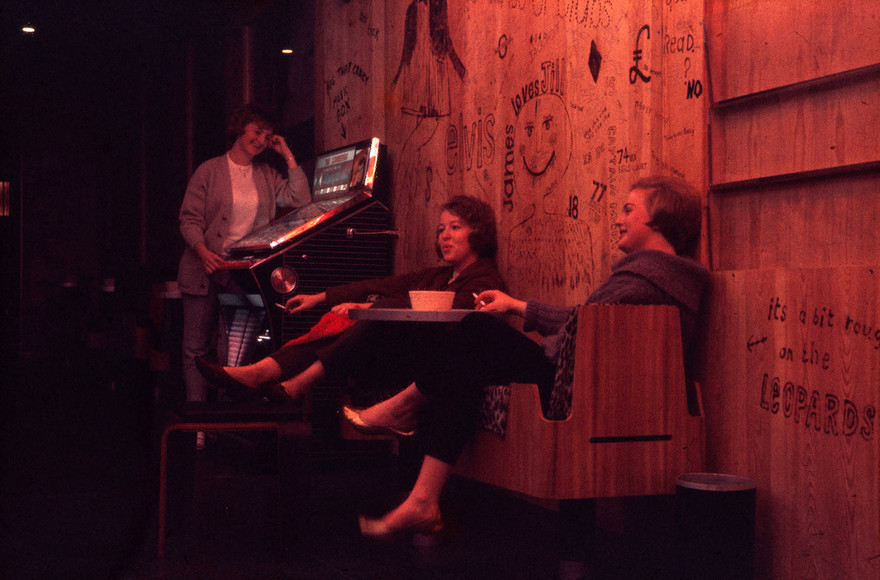 Bill Rowntree ventures inside the Lautrec in the early 1960s. The décor is deliberately downmarket with walls clad in bare plywood, and graffiti encouraging the young clientele to “swing”. The only recognisable name on the wall celebrates “ELVIS”. This louche behaviour – smoking, no particular place to go – is what the parents who read the 1954 Mazengarb Report on juvenile delinquency were worried about. 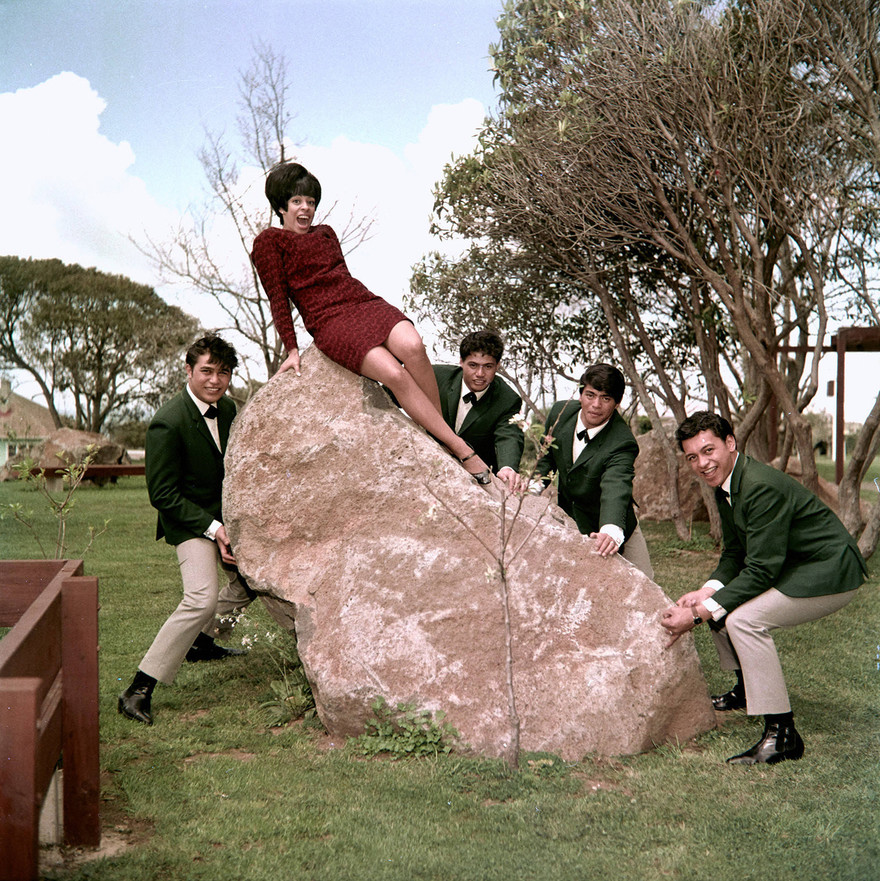 The Logan Park Motor Hotel, on Campbell Road, Greenlane, was one of the early restaurants to offer dinner and a show, with alcohol available with your meal. In October 1967 the feature act was the Tikiwis showband. From left: Winiata Watene, Helene Johnston, Paul Watene, Philip Rivers, David Rivers.

Helene Johnston of the Tikiwis 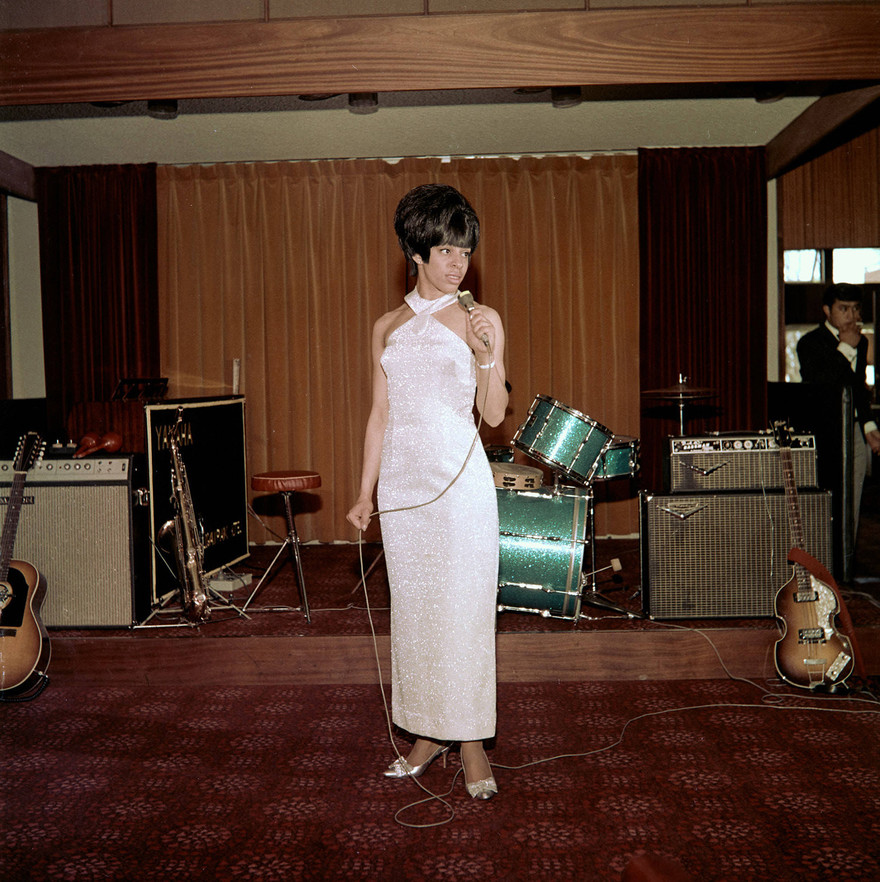 Tikiwis’ singer Helene Johnston was an Australian, aged 24 when this photo was taken in October 1967; the rest of the band were just under 20. 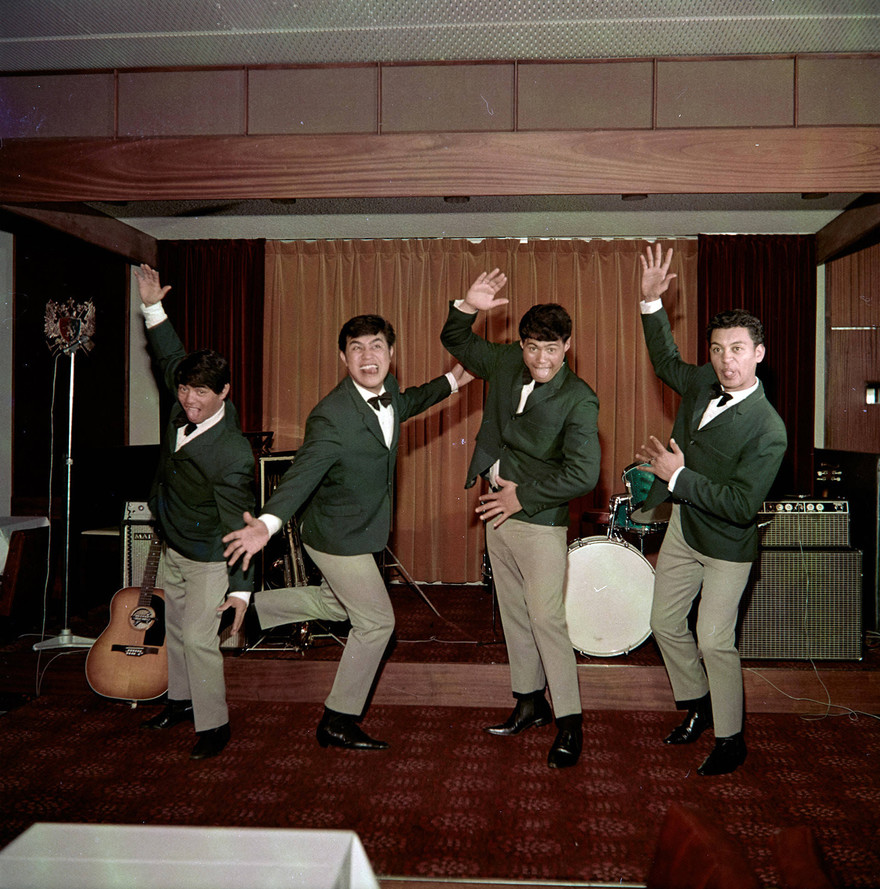 The Tikiwis demonstrate the haka bracket of their set in a promotional photo from October 1967. A few months later, the group went to Vietnam to entertain New Zealand and US soldiers. “Never again,” was the headline of a Sunday News article on their return in August 1968. The troupe found itself immediately in the firing line during a Viet Cong attack on Saigon in February. “The day we arrived in Saigon they were celebrating the Chinese New Year, letting off crackers,” said Philip Rivers, aged 20. “But as night came you could hear the explosions change to rifle shots. We knew then that we’d arrived.” Rivers didn’t recommend performing in Vietnam; the trip was profitable, but not worth the risk. 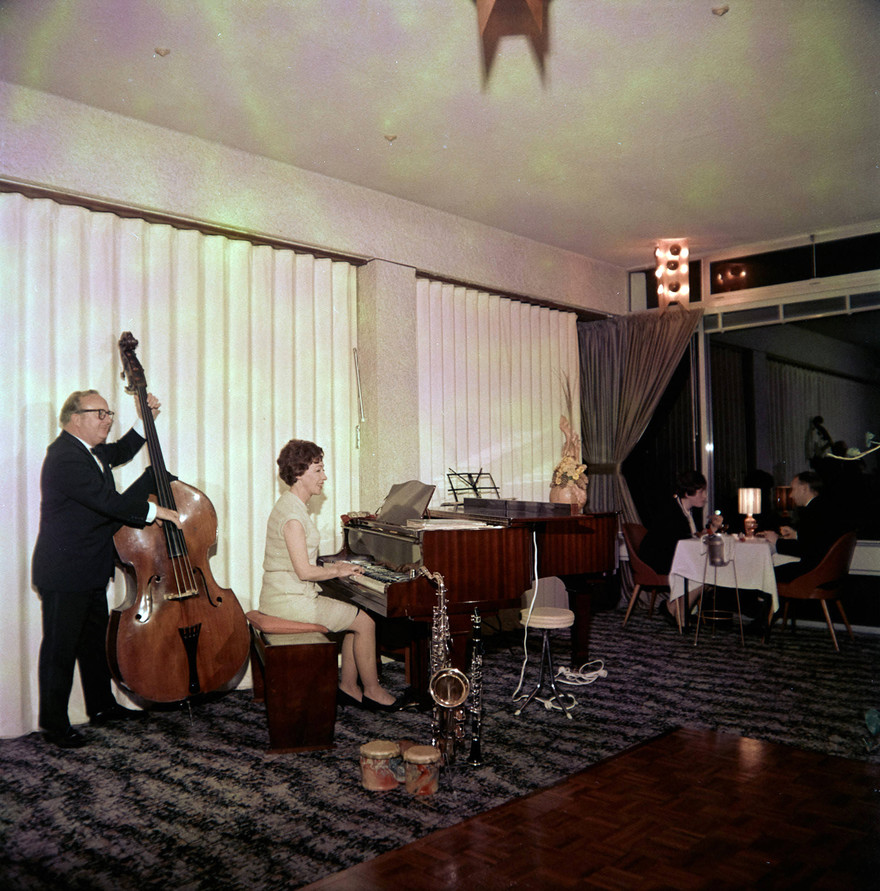 The venue is the Four Canoes Restaurant, at the White Heron Lodge, Parnell; the year is 1968. Paul Lestre, a UK immigrant and multi-instrumentalist, is best remembered for the 1959 album he made with his quartet at the Hi Diddle Griddle restaurant on K Road. Nancy Harrie was Auckland’s leading popular pianist for decades. She played every cocktail bar and hotel lounge in the city, was in many radio big bands, as well as the orchestra featured in the early 80s TV music series Radio Times. 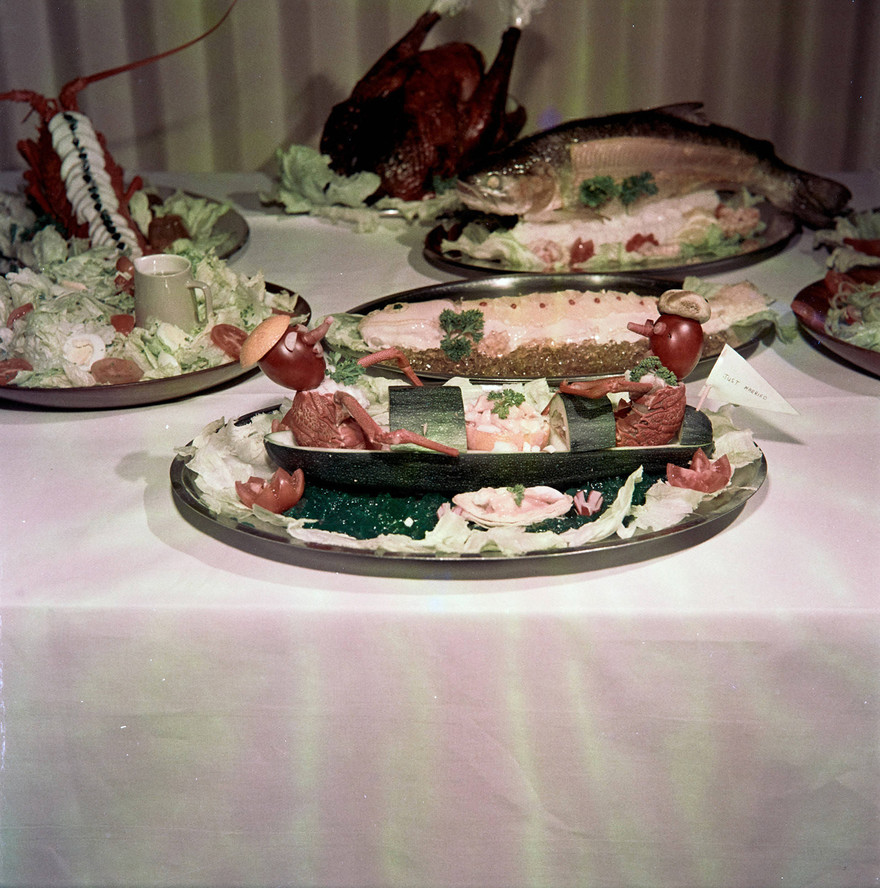 Along with Lestre’s music, patrons at the White Heron’s Four Canoes could enjoy the tempting buffet, with presentation sure to have risen from the Edmonds Cookery Book. Eleven years later Bob Marley and the Wailers stayed at the White Heron. They enjoyed playing soccer on the lawn with the likes of Dylan Taite, but couldn’t eat the food. Instead, they cooked their own meals in their rooms. Other guests were snooty about the unfamiliar odours in the hallway. 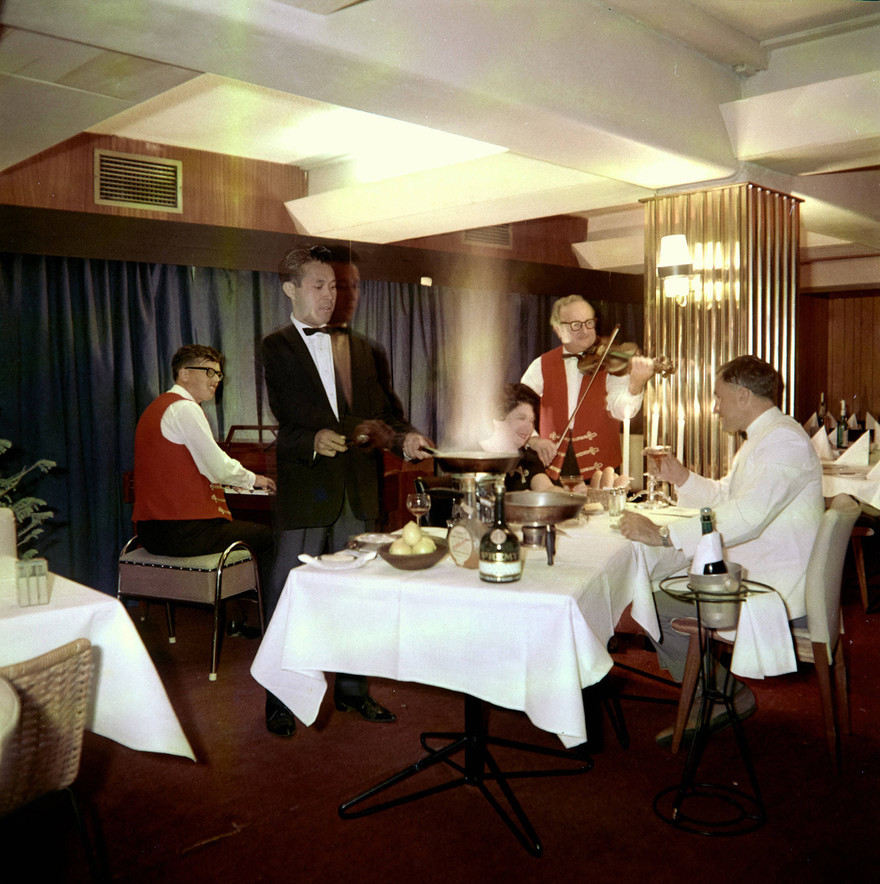 Paul Lestre with the instrument on which he was best known, the violin. The Café de Budapest was in Hutchinson’s Arcade at 351 Remuera Road. Before the war Lestre played in the Royal Philharmonic Orchestra, and at one of his first rehearsals, conductor Sir Thomas Beecham noticed him and asked his name. “Paul, sir,” came the response, but Beecham heard it as “Ball” and immediately said, “Very singular.” Lestre – whose birth name was Jim Callan – retired from playing Auckland clubs in 1978, only to return a couple of years later when Stephane Grappelli-style gypsy jazz made a comeback. He was part of the Hot Club de Ponsonbi group, and played many Cotton Club concerts. The pianist in this photo is Oscar Huijsse Sr, a Dutch émigré who began performing professionally in Auckland two days after his arrival in New Zealand in 1962. He played in most of the city’s leading venues and restaurants, and was part of Lestre’s White Heron combo for nearly three years. 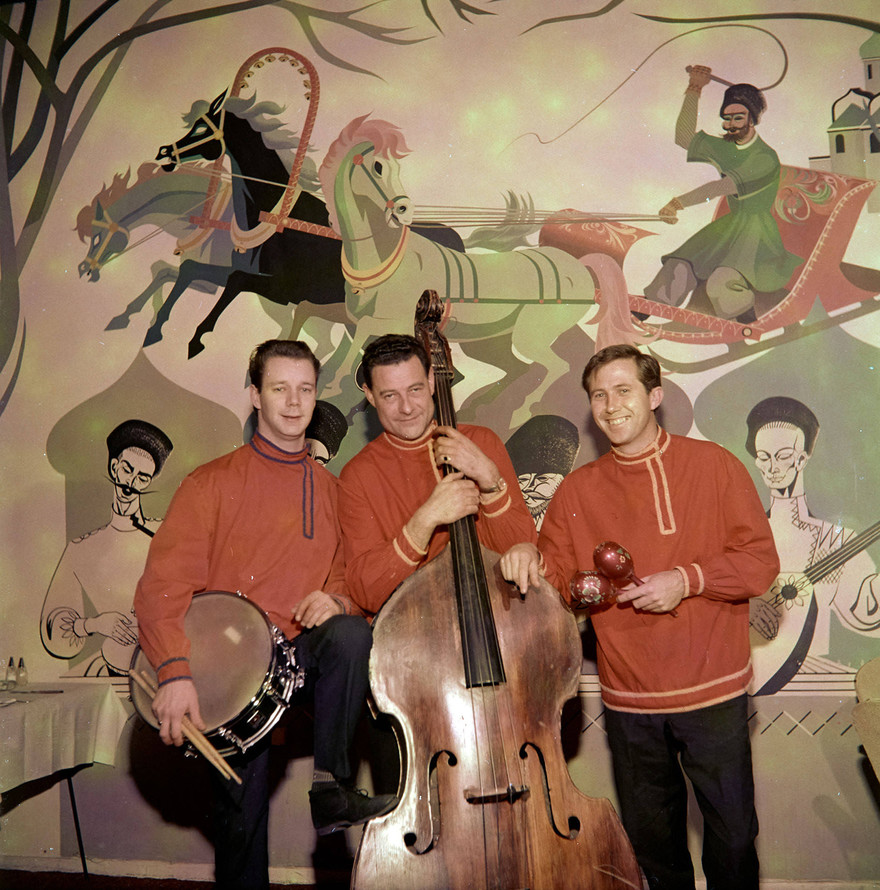 The Troika restaurant was at 28 Fort Street; Des Windsor’s trio held court there for several years. Pictured in 1967 are Windsor (holding maracas), drummer Dave May, and bassist Derek Alexander. In 1975 Windsor returned, replacing a trio led by Carl Doy. On drums was Bruce Morley, who played in countless combos and genres, and bassist Stan Knecht, who had been with the Society Jazzmen. Windsor played acoustic and electric piano, and sang; he clocked up 12 years in Australia, playing leagues club and cabarets in Sydney, while still honouring engagements in Auckland. 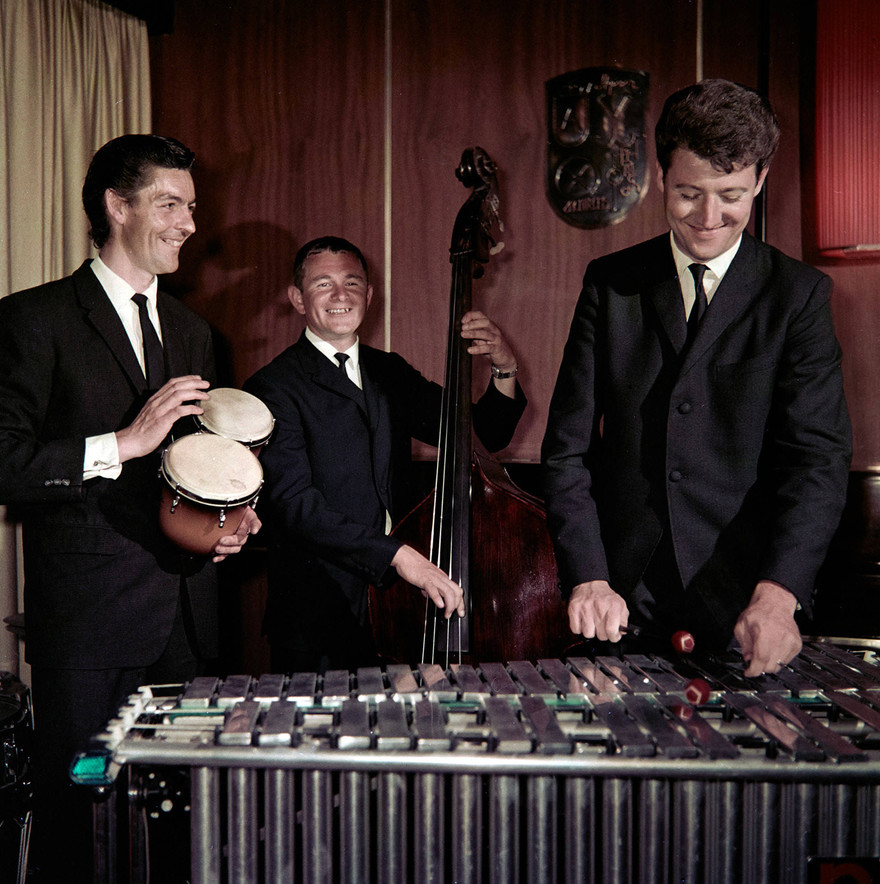 UK-born dance band and cruise ship pianist Terry Gray arrived in New Zealand in 1965 and started performing at the Royal International Hotel on Victoria Street; a year earlier The Beatles stayed there. He often performed and wrote arrangements for television, and was a prolific jingle writer in the late 60s. His trio began playing at the El Matador Restaurant on Symonds St in 1966; in this photo they are Mauri Faiers (drums, formerly of the NZ Jazz Trio), Mike Foley (bass, vocals), and Terry Gray (vibraphone, piano). When the LP Terry Gray Trio at El Matador was released in 1967 the drummer was Don Branch, though Faiers contributed some Latin percussion to the contemporary standards. The proprietor of the El Matador, Lada Ourednik, claimed to be the first restaurateur in the country to offer his patrons music and entertainment 365 days a year. 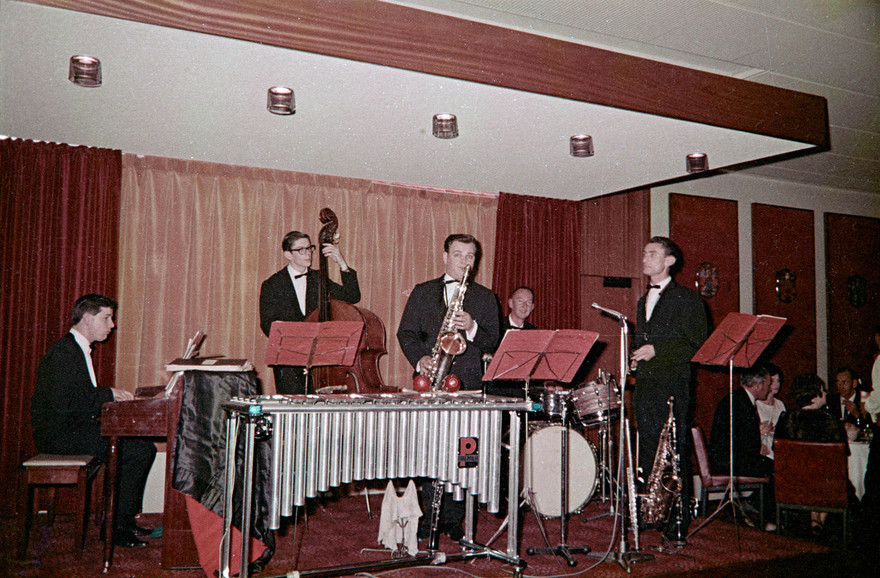 In the mid-60s expat Australian saxophonist Jimmie Sloggett led the band six nights a week at the Park cabaret, at the Logan Park Motor Hotel complex. It was a new concept in New Zealand entertainment: a floor show with a regular band and visiting singers, in a restaurant that served alcohol until midnight. From left are John Pickworth (piano), Kevin Haines (bass), Jimmie Sloggett (saxophone), Ray Edmondson (drums), and Mark Davis (saxophone). 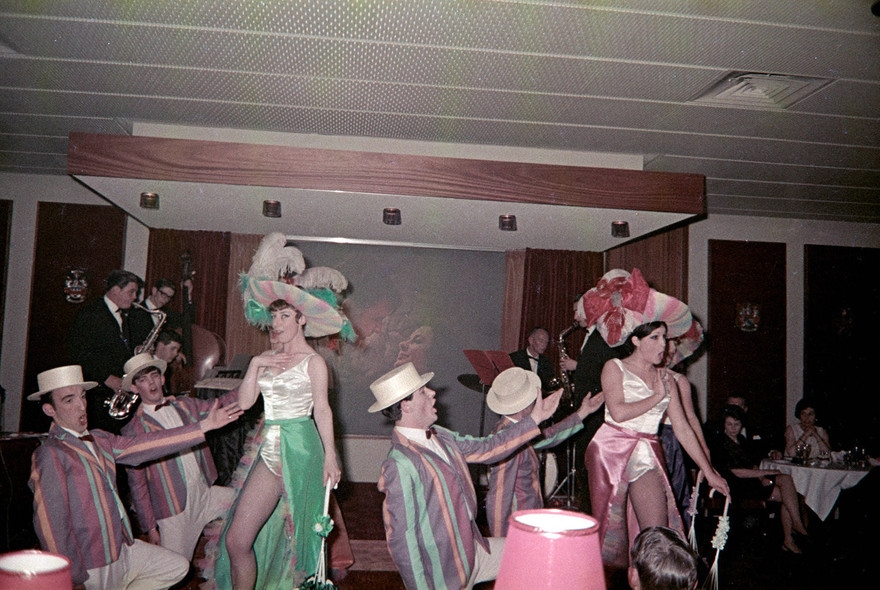 To be part of Jimmie Sloggett’s band at the Logan Park, all the musicians had to be able to read music, as they backed overseas singers who arrived with their charts, and locals such as Toni Williams, Eliza Keil, and Tommy Adderley. Williams and Keil recorded live albums there. Recalling the season with Adderley, Sloggett said proudly, “We would be the only little four-piece group that had the guts to take on the eight-minute 30-second version of ‘MacArthur Park’.” 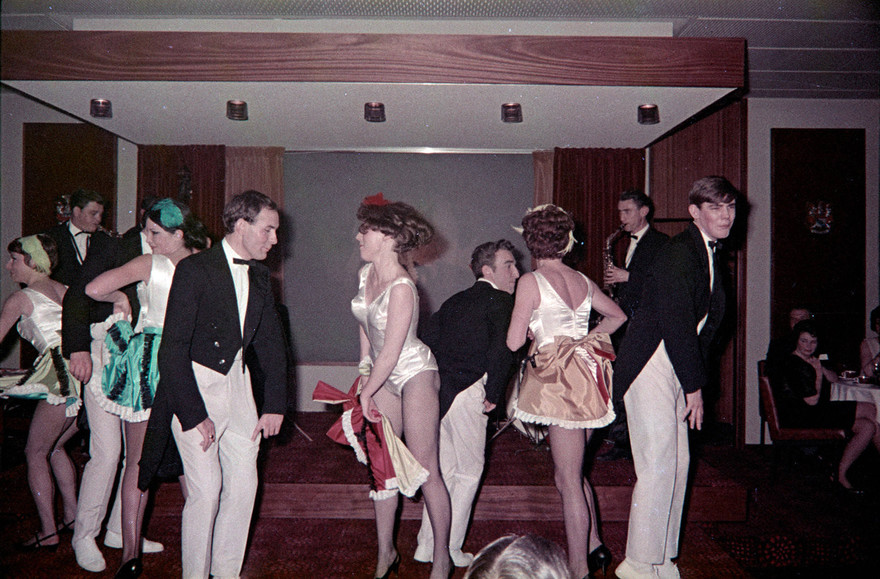 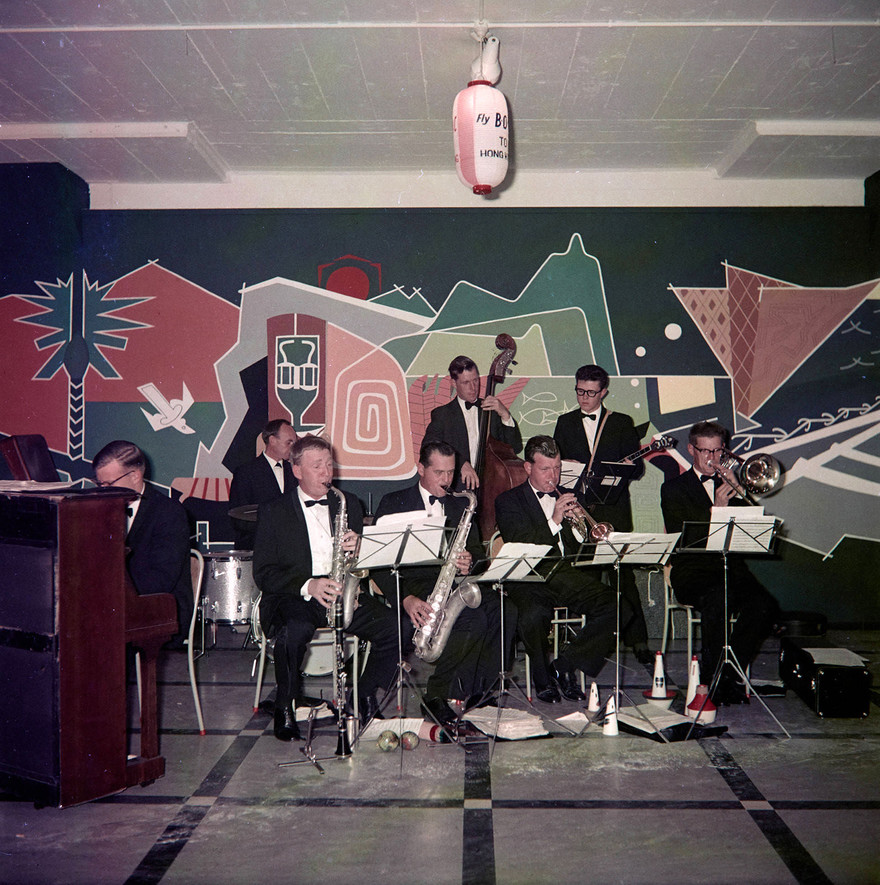 The Royal Easter Show has been an annual event at the Auckland Showgrounds for decades, and in the 1960s it featured pop bands for the teenagers and dance bands for the adults. Here, at the BOAC stand, is a well-presented dance band in front of a dramatic modernist mural. The only musician to have been identified so far is drummer Don Branch. 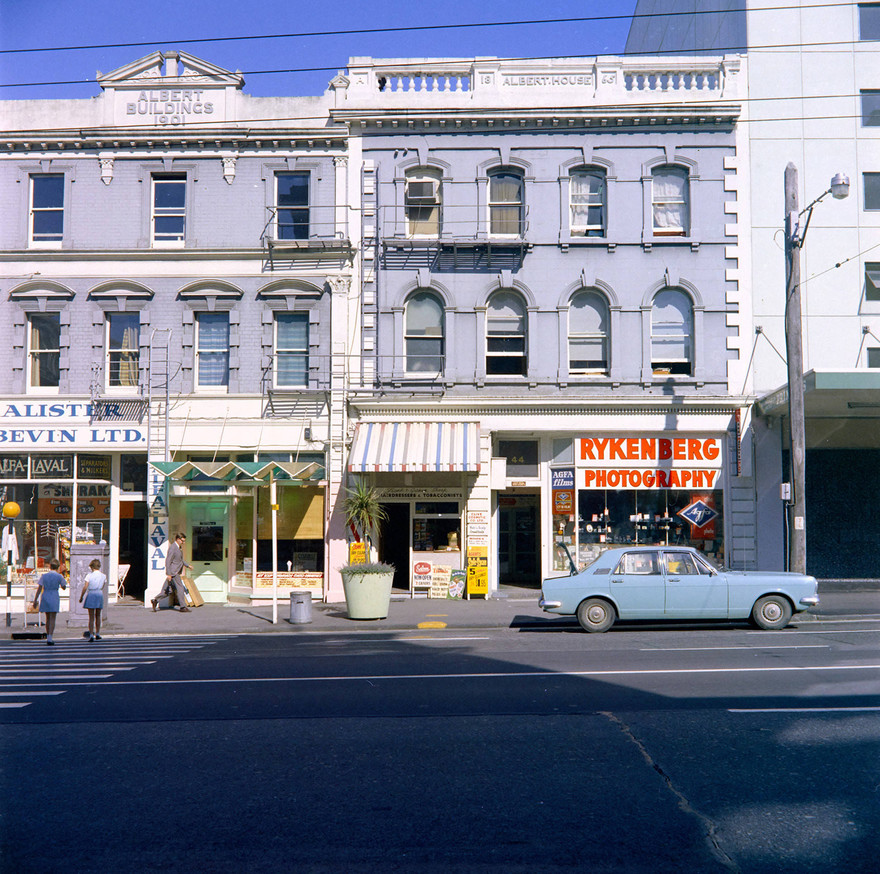 Thanks to Auckland Libraries Heritage Collections