Tony and the Initials Profile

aka The Initials
Chris Bourke

f t
Tony and the Initials seem to have gone down as little more than a footnote in the 60s pop boom. But at the time they were a substantial live name in Wellington, and they left behind a catalogue of strong-selling, well regarded recordings.

Import restrictions were harsh in post-war New Zealand. But in return for exporting meat and butter to Britain in the early 1960s, New Zealand received many small luxuries: Beano and Victor comics, Beat Instrumental magazines, Morris Minor cars, HP sauce … and rock and roll in the form of heavy vinyl records and the occasional musician.

They performed together on the voyage out, and enjoyed their time in New Zealand so much they decided to emigrate.

In 1960 Tony Eagleton arrived as a crewman on the Dominion Monarch, the ship that also brought Tommy Adderley. During the first wave of rock and roll in Britain, Eagleton played guitar in groups backing Marty Wilde and Tommy Steele. Wanting to visit his brother in New Zealand, he signed on as a seaman with some musical friends. They performed together on the voyage out, and enjoyed their time in New Zealand so much they decided to emigrate, and try to earn a living as a band based in Wellington.

They called themselves Tony and the Initials, allegedly because when they all turned up for rehearsals they were all wearing initialled handkerchiefs in the breast pockets of their jackets. This was rock and roll, UK style, when the clean-cut Shadows ruled.

Eagleton was a master of publicity. Within three weeks of arriving, he received a full-page spread in Joy entertainment newspaper, published in Wellington. The band already had many bookings, he said, and they would soon have a residency in a new nightclub. This was the Carousel Cabaret on Tory Street, which Tony was to run with his brother Derek.

Eagleton, the leader of the original Initials, played lead guitar, piano, vibes and harmonica. Also in the original line-up was drummer Harry McConnachie, who had played in military and dance bands. The band had two rhythm guitarists: Alan Ruffell, came from a skiffle background, and Barry Grehan, who had “studied guitar under some of England’s finest tutors”. Bass-player was Don Evans, who had met Eagleton at an audition for Marty Wilde’s backing band. Once in Wellington, they were soon joined by 21-year-old pianist Walter Neale.

While never exactly hip, the Initials worked hard, recording prolifically, playing residencies, backing local artists such as Dinah Lee, Maria Dallas and Lou and Simon, and appearing on bills alongside Cliff Richard and the Shadows, Adam Faith and Lonnie Donegan. In 1962 they were one of the first bands to be featured on Wellington television. They became very adept in the studio, and backed vocalists such as Sarah Brown, 14-year-old Gisborne singer Julie Nelson (on ‘Johnny Magic’, not her hit ‘Sticky Beak the Kiwi’).

The Initials’ recording debut was a cover of the Shadows’ ‘FBI’, released on Kiwi not long after they arrived in New Zealand. Tony Vercoe, the head of Kiwi, told William Dart in 1994: “Tony Eagleton was an original spirit and soon began writing new numbers for the group … they were soon developing a unique personality for the band. Humour was among its strong points. Tony was a natural comic and his wry approach influenced many later numbers.”

In 1962 the band jumped on the craze for the Twist with the single ‘Slow Twistin’/‘Twistin’ Time’; its follow-up, ‘Mr Dee-Jay Twist’, became their first big hit. Written by Eagleton, it implored radio hosts to give them some airplay.

The Initials’ first album On Again – Off Again (Kiwi, 1963) displays their versatility and humour. Although ‘Mr Dee-Jay Twist’ was included, they mostly covered pre-rock and roll standards such as ‘Knee Deep in the Blues’, ‘High Noon’, ‘Tavern in the Town’ and ‘How High the Moon’. “It was one long laugh doing that album,” recalled Vercoe. “Never a dull moment for Frank and me.” [Frank Douglas was the engineer at Wellington’s Lotus studios, before his long career at HMV.]

Before breaking up in 1967, the Initials recorded 17 singles, four EPs and two albums, plus numerous sessions as backing musicians.

Vercoe: “At one stage we dubbed in [a] terrible discord salvaged from the Folk Dance sessions; at another we conjured up a mighty explosion intended to blow that troublesome band right out of the studio. They were survivors though, and so were we.” The sound effects were included on the On Again – Off Again album, and four tracks were released in France by Pathé-Marconi on an EP called Les 4 Kiwis.

When Beatlemania began to sweep the UK in 1963, Tony and the Initials were perfectly placed to jump on the bandwagon in New Zealand. Their song ‘Beatle Bridge’ was a cheerful pastiche of ‘I Want to Hold Your Hand’, while the more hard-edged Eagleton original ‘Hello Jenny Lee’ (1964) showed how perfectly the band could emulate the Mersey Sound.

By then they were recording for Viking, and Leo Clarke from the Skyrockets had joined the band. He not only replaced Barry on rhythm guitar but came with a spectacular voice shown to full effect on their 1965 cover of Roy Orbison’s operatic ‘Leah’: it became the title track of their last album. A 1966 EP called Leo Clarke With Tony and the Initials featured the poignant ‘I May Never Pass This Way Again’. Roger Watkins, author of When Rock Got Rolling about the early 1960s Wellington scene, wrote that the tracks “still stand up to scrutiny and are testimony to this guy’s vocal abilities.”

Before breaking up in 1967, the Initials recorded 17 singles, four EPs and two albums, plus numerous sessions as backing musicians. Watkins describes them as “an ace live act” – a dance band and covers act, certainly, but “in their heyday they rocked and rolled ’em at every opportunity.”

From the beginning Eagleton saw that as his goal. Just after arriving in New Zealand in 1960 he said, “I find that showmanship counts almost as much as being ‘musically correct’ and to me it’s a question of who gets preference on a booking: musicians who play with poker faces or not-so-good musicians with twice the amount of stage personality?”

Tony Eagleton passed away in May 2014 and Harry McConnachie in February 2014. 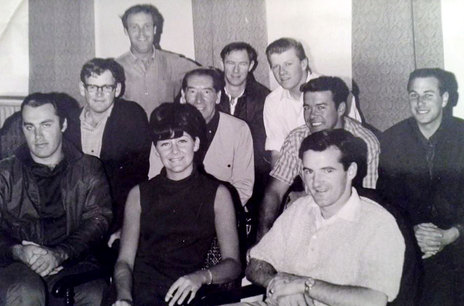 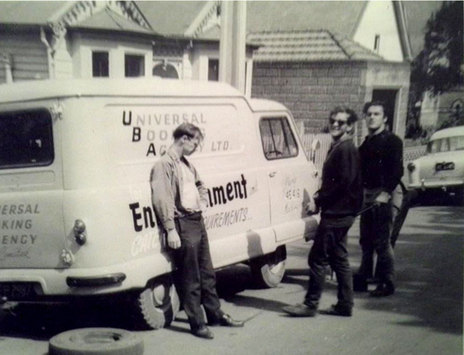 With a UBA van, Tony And The Initials do what countless bands have had to do over the years - change the tyre on a heavily laden vehicle on tour. 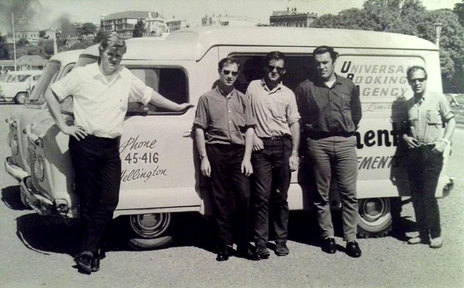 Tony And The Initials just after arriving in Picton from Wellington at the beginning of The Maria Dallas Tour January/February 1967. At the far left is roadie/driver Jim Pilcher 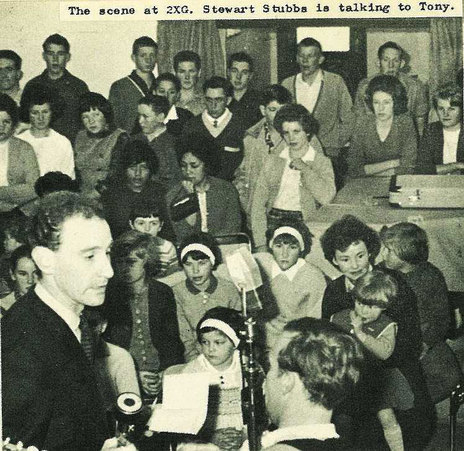 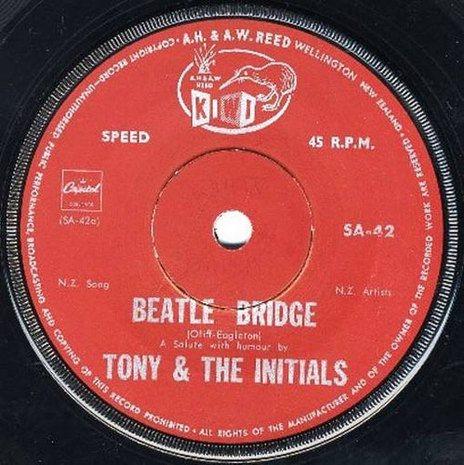 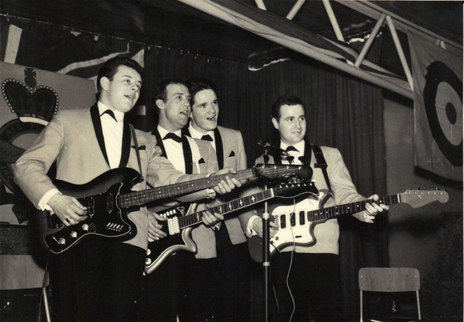 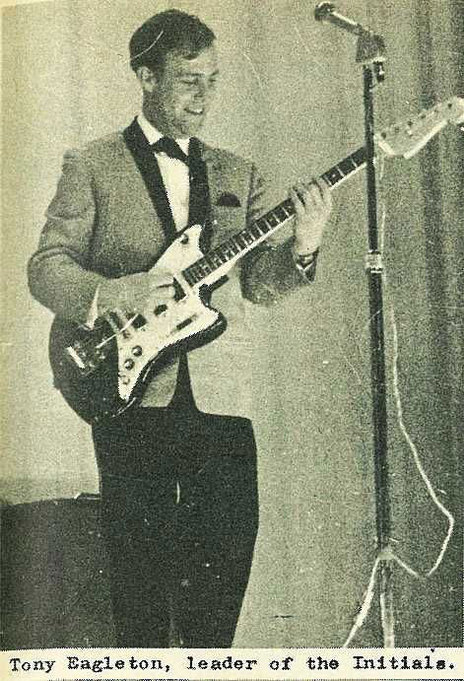 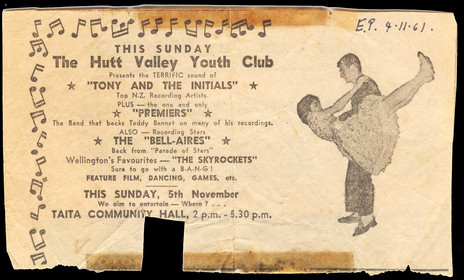 In the 1960s, the Hutt Valley Youth Club dances at the Taita Community Hall featured many of the top bands of the day. At this dance in November 1961 the acts included Tony and the Initials and the Premiers 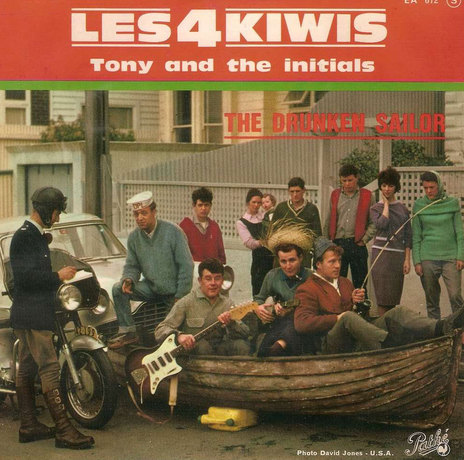 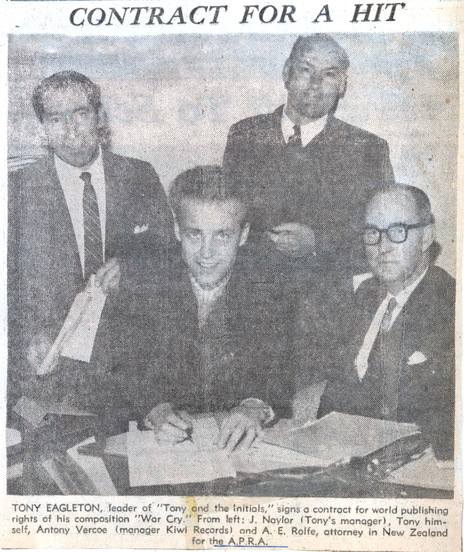 Tony Eagleton signs a publishing contract in 1961 for his second single War Cry. Whilst this sold well in New Zealand there is no indication it was ever a global contender. 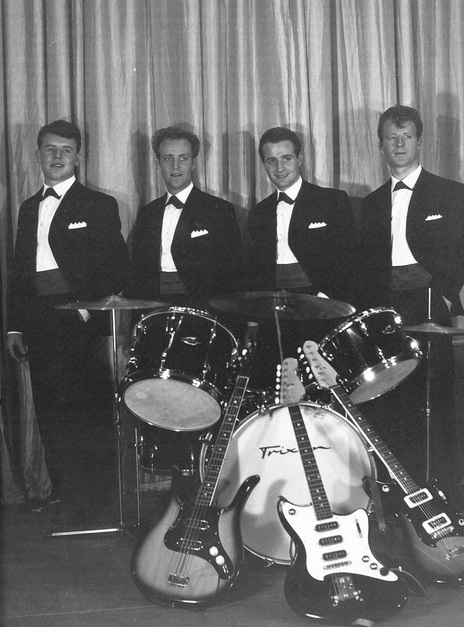 High High The Moon, from the French EP

After the band split Leo Clarke and Barry Grehan moved to Australia. Alan Ruffell went back to the UK. Tony Eagleton worked at Radio New Zealand