f t
Adeaze broke out in 2004 with their debut album Always & For Real, a No.1 smash in New Zealand released on local hip-hop and R&B label Dawn Raid Entertainment. The record featured two huge singles – ‘A Life With You’, which was later sampled by Mariah Carey, and ‘Getting Stronger’, a song that quickly rose to the top of the charts thanks to an unforgettable hook from Aaradhna. Adeaze have gone on to release two more albums, the most recent of which was inspired by their biggest fan: their mum.

Born in Hamilton in 1980 and 1981, Adeaze are the brothers Feagaigafou Nainz Tupa'i and Logovi'i Viiz Tupa'i: Nainz and Viiz. They grew up close to their parents, especially their mother Selepa, who contracted polio at age three in Samoa when a fishing spear went through her leg. It wasn’t until she had lived in New Zealand for eight or nine years that she even got access to a wheelchair. “I remember Mum physically crawling around the house to wake us, cook for us and do all of the sorts of things that a normal mum would do,” Nainz told Stuff in 2018. “She never let her disability get in the way.”

Their father gave up his factory job when the boys were young, becoming an around-the-clock caregiver for their mother. In 1990, when Nainz was 10 and Viiz was nine, they moved to Tokoroa so their mum could be between Auckland and Rotorua to access medication in both cities. Four years later, the Rotorua facility closed and they relocated to Mangere in South Auckland.

Nainz and Viiz had a strict musical upbringing thanks to their parents, who encouraged the brothers to sing at church and later pushed them to perform at school, rest homes and private functions – all for free. “Mum and Dad taught us don’t worry about the money,” Viiz told the Otago Daily Times in 2004. ‘There were times when me and my brother would say ‘oh come on, at least $20, or something’ because we weren’t well off – we were pretty much poor.”

The brothers practised songs from the radio, by the Bee Gees, Whitney Houston and Mariah Carey.

Back then their parents would lay-by instruments for the brothers to learn on, starting with piano, then guitar and drums. Even when they moved to Tokoroa, their parents would still be paying off the ones they had on lay-by back in Hamilton. The brothers practised songs they heard on the radio from the likes of the Bee Gees, Whitney Houston and Mariah Carey. “It was quite a challenge because when you’re kids you just want to play all the time,” Nainz said to NZ Herald in 2004. “And me and this guy would be in the house playing instruments.”

In 1997 they entered Smokefree Rockquest, the long-running local competition for intermediate and high school bands. To reflect their laid-back style of music, they called themselves Adeaze. “In army terms, ‘attention’ means to stand to attention,” Nainz explained in a 2004 interview with NZ Musician, “and then ‘at ease’, which means relax.”

It was at Smokefree Rockquest that they caught the attention of Brotha D (Danny Leosavaii), co-founder of local hip-hop and R&B record label Dawn Raid Entertainment. The chance meeting led to the brothers getting two of their songs (‘Neva Gon Let U Die’ and ‘Luv Iz Tru’) on the Dawn Raid compilation album Southside Story that was released in 2000. Adeaze officially signed with Dawn Raid in late 2002, a move which saw them become labelmates with Deceptikonz and Ill Semantics – two groups whose members played a key role in local hip-hop’s breakout in the early-2000s.

‘A Life With You’, the group’s easy-listening first single, was inspired by a fallout Nainz had with his partner. “I said a few things that I shouldn’t have said,” Nainz explained to NZ Musician at the time. The lyrics, soulfully sung over a soft R&B beat, are straight to the point: “I am sorry for the way that I’ve been treating you / you’ve been so good to me and I have been so cruel to you.” The song made its debut at No.6 on the NZ Top 40 before peaking at No.3. All up, it spent 14 weeks on the charts, going platinum in the process. Mariah Carey also went on to sample the song on 2005’s ‘Your Girl’. “They’re just bonuses eh,” said Nainz of the group’s success. “It’s more important that we’ve touched people’s lives.”

Adeaze’s debut album Always & For Real was recorded over a year at Dawn Raid Studios and released in May 2004. “We mostly went into the studio when the feeling was there,” Viiz told NZ Musician. “Our main goal was to make an album that everyone can listen to. Over the past few years there’s been lots of money-making music coming out and a lot of the real music – like Marvin Gaye, Stevie Wonder and all that positive style of music – has gone.”

The next single from the record ‘Growing Stronger’ introduced a little known singer at the time named Aaradhna, whose captivating voice helped push the song all the way to No.1 in August 2004. (Impressively, the track was one of six local songs in the Top 20 that week.)

Nainz and Viiz wrote just about everything on Always & For Real themselves, apart from the three cover songs that appeared on the record – The Bee Gees’ ‘How Deep Is Your Love’, Eric Clapton’s ‘Tears In Heaven’, and the Samoan gospel song ‘E Paia’. “I always stay true to believing that if anyone asked me whether I believed in God it was always going to be 100 percent,” Nainz said of the role faith plays in their music. “I believe God exists, I believe he’s real. I believe in Jesus, I believe in the good spirit. But in saying that there’s heaps of flaws in our lives as well, but those are ours to deal with. Our main message that we want to get across is that it’s about the music.”

Always & For Real went straight to No.1 on the album charts, selling over 18,000 copies in its first week of release. That same week NZ Idol winner Ben Lummis (who had attended Excel School of Performing Arts with the brothers) debuted at No.1 with his single ‘They Can’t Take That Away’ – only the second time in history that local acts had simultaneously reached No.1 on both the album and singles charts,after Scribe achieved the same feat the year prior.

No one was prouder of the brothers than their biggest fan: their mum. “She is the reason we are where we are today,” they told Spasifik magazine in 2011. “I remember asking her once to record a TV show we were on. When we were watching it back we wondered why it was a bit fuzzy. Then the screen started shaking a bit, then it zoomed back, and then in again trying to focus. She was recording the TV with a hand-held video camera because she couldn’t find the remote! Now that’s dedication.”

No one was prouder of the brothers than their biggest fan: their mum, Selepa.

Always & For Real quickly achieved double platinum sales in New Zealand, but it would be a seven-year wait until their follow-up Rise and Shine would be released. One contributing factor to the hiatus was that they had both started families. “We’re your typical blokes,” Viiz told Otago Daily Times in 2011. “You know we can't multi-task very well, so we’ve got to do one thing at a time.”

Another factor was Dawn Raid going into liquidation in 2007, which resulted in the brothers being released from their contract with the label and signing a new deal with Universal Music. In 2010, ahead of the release of Rise and Shine, they teamed up with ex-Boyzone vocalist Ronan Keating to record a cover of ‘Say Say Say’ by Michael Jackson and Paul McCartney for his album Duets. “We knew Ronan as the multimillionaire from Boyzone,” Nainz told Spasifik magazine, “and to actually see our name next to his on the album credits was awesome.”

Their formula stayed much the same on Rise and Shine, with the brothers sticking to tight harmonies, memorable hooks and a clean-cut Pacific R&B sound – but the seven-year wait meant they wouldn’t see the same success as their first time round. The 2011 album featured two cover songs – Curtis Mayfield’s ‘So In Love’ and Ardijah’s ‘Watching U’ – while Don McGlashan, Che Fu, Jason Kerrison, Te Awanui Reeder of Nesian Mystik and Vince Harder all appear on ‘Paradise’, a heartfelt single about pushing through the hard times.

It’s advice Adeaze took to heart on their third album A Mother’s Love, released in 2018 – another seven years between albums. The first single ‘You Make Me Smile’ was released in time for Mother’s Day as a tribute to their mother – and their biggest fan – who had passed away two years prior. Viiz had to take a step back from music while he was grieving. “There were times during recording where I would break down and that would affect my voice,” he told Stuff.

“The main memory I have of Mum, especially when we were recording the album, is of her smile and the joy she had for life. She always made us happy. She never complained about her disability and, as poor as we were, she always taught us to be happy for what life had given you.

“Music was always a comfort for Mum,” he said. “It wasn't just a thing she taught us.” 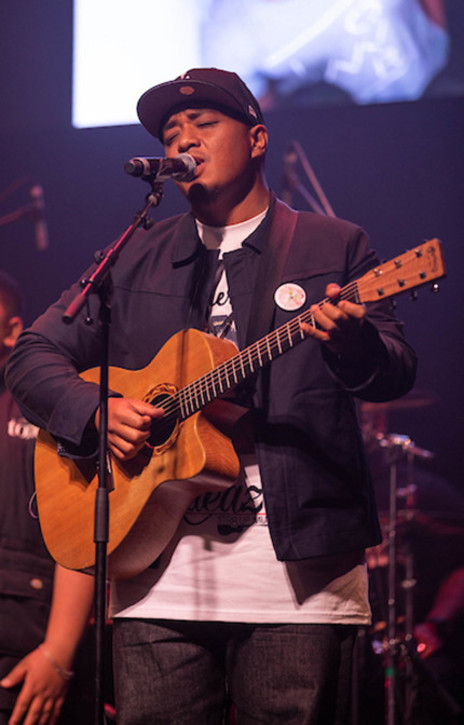 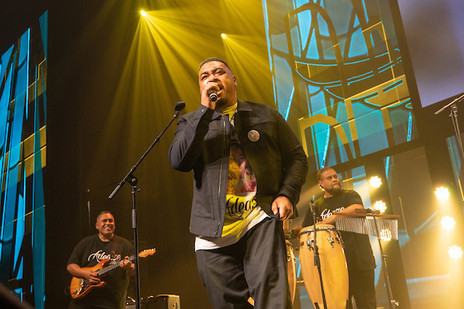 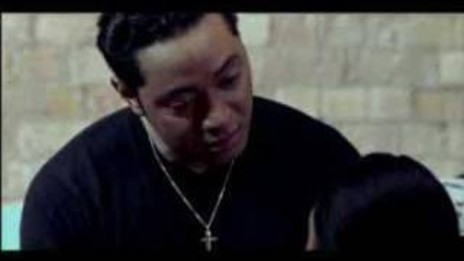 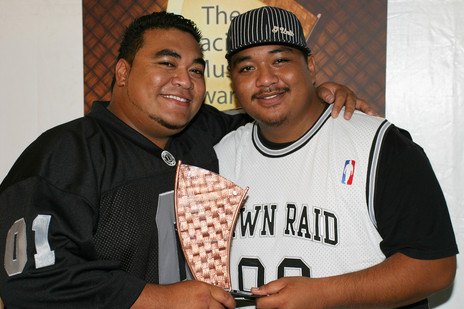 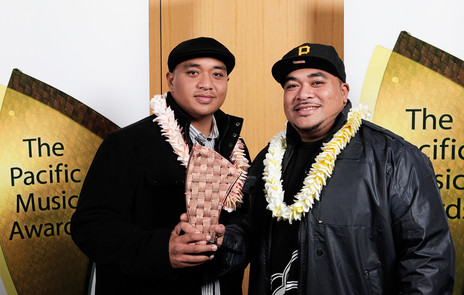 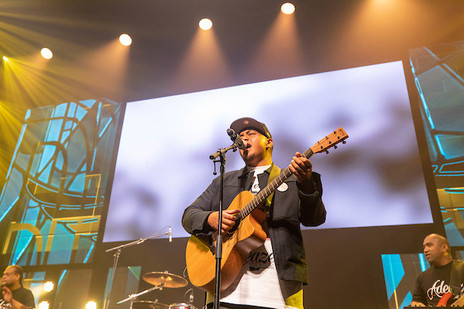 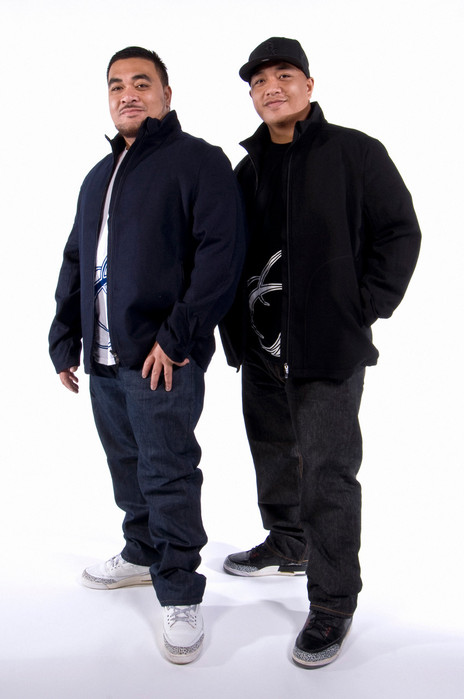 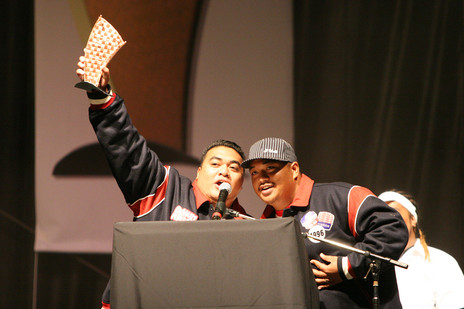 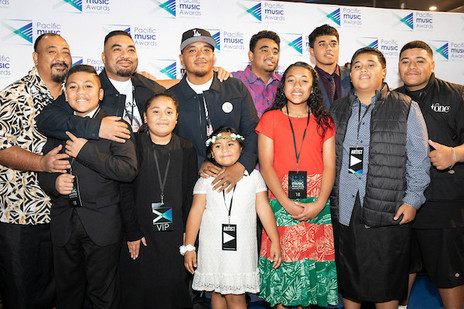 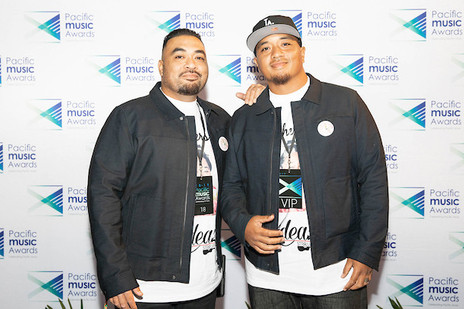 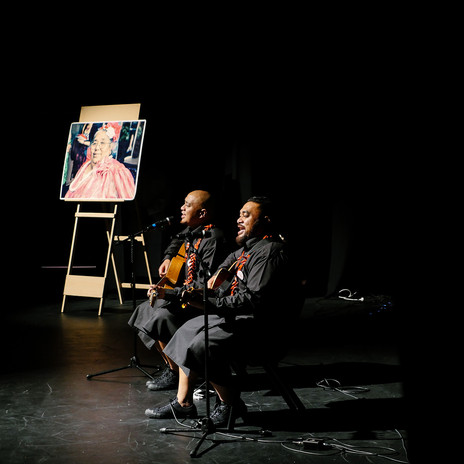 Adeaze with a portrait of their mother Selepa, at a concert for mothers, just prior to the release of the album A Mother's Love, 2018. 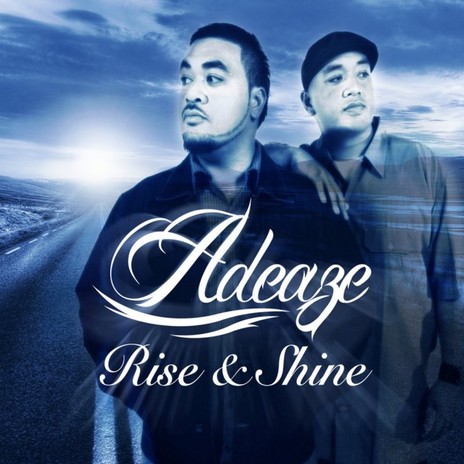 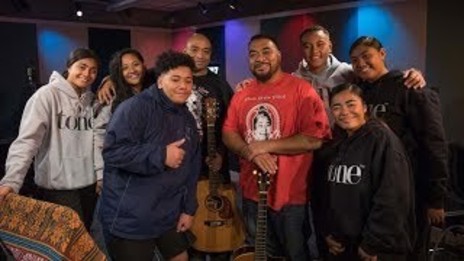 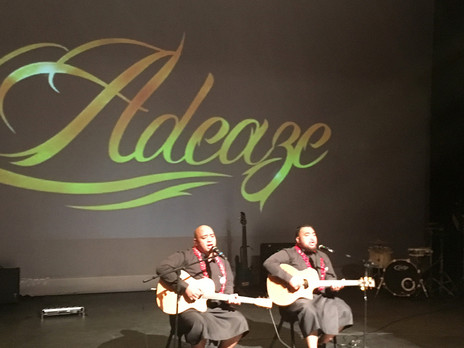 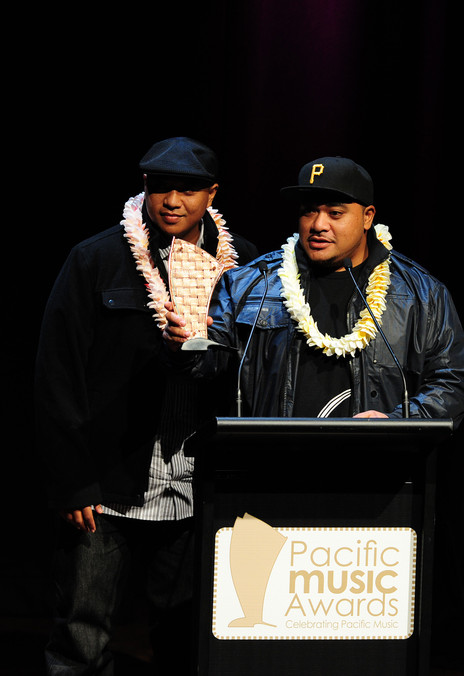 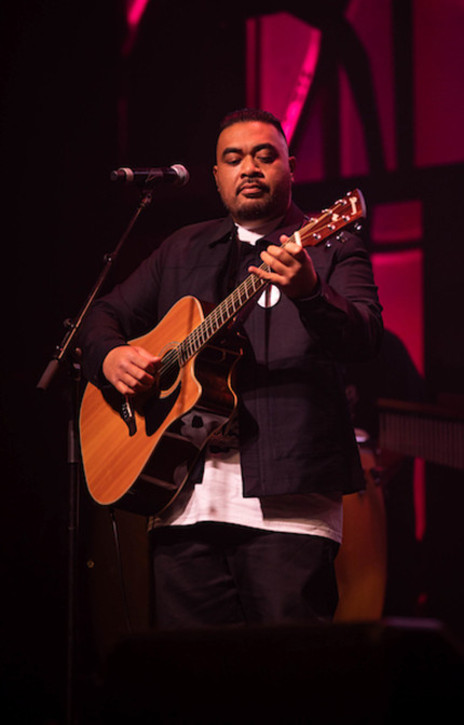 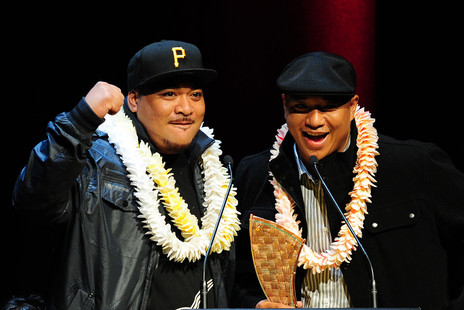 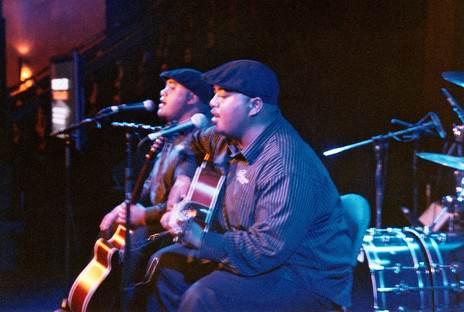 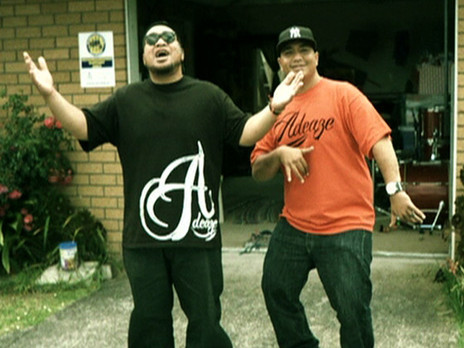 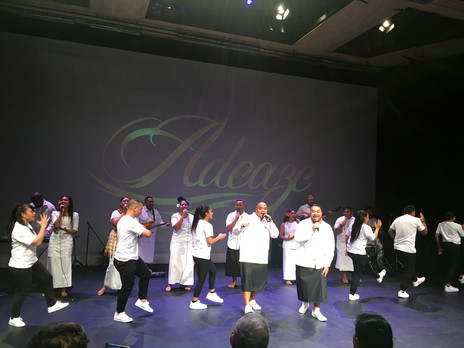 Adeaze at a special concert for mothers, just prior to the release of the album A Mother's Love, 2018. 'You Make Me Smile', the album's first single, was filmed during the evening. 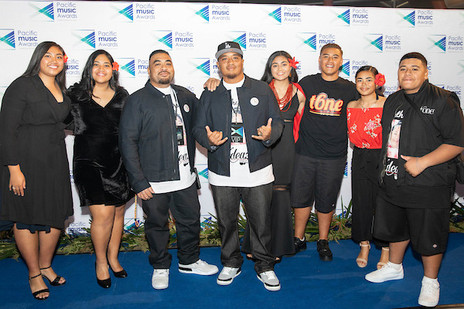 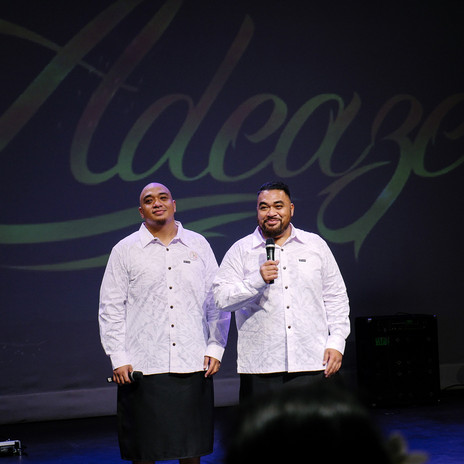 Adeaze - Viiz and Nainz Tupa'i - at a special concert for mothers, just prior to the release of A Mother's Love, 2018. 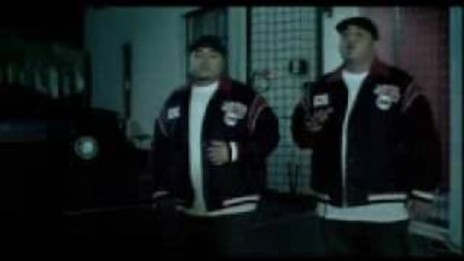 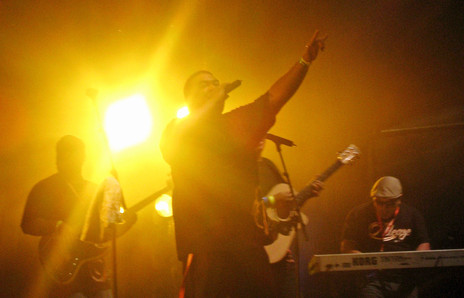 Adeaze at the Parachute Festival, 2012.