Beneath its conservative surface, in the 1950s Christchurch had a thriving underworld hip to popular culture, Ray Columbus said. “It has two really good things going for it as far as music goes,” he told Roger Watkins in a 1992 oral history interview for the Alexander Turnbull Library. There was the strong connection with Britain, and the Cathedral Square.

Everyone met in the square: it was the place to go if you wanted to meet someone, or find out something. “We used to all hang out in the square, we’d all meet there, by the bug house and the Crystal Palace.” That was where you hung out, trying to be noticed, “in your latest zoot suit or brothel creeper shoes or your latest hair style. You went to the square, on Friday night, Saturday night – boom, that’s where you went. 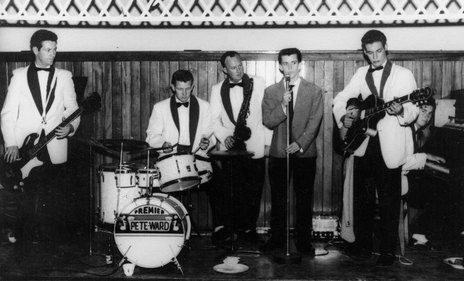 After 1956, following the Soviet invasion of Hungary, many Hungarian refugees began to arrive in Christchurch. “I really noticed them for two or three reasons. They were all Catholic of course, so I used to see them at church and they used to wear all this cool gear. I thought I was a pretty hip sort of guy – a young kid wearing all the bodgie clothes. But they took it to another dimension. They wore what became known as the Teddy Boy look: really fancy, very good quality suits, Benedictine shoes with big, thick two-inch brothel creeper soles. And their hair was just amazing.”

The Hungarians changed the way the young and the hip socialised in Christchurch, Columbus said in 2006. “There was a very big coffee-lounge culture in Christchurch, which the Hungarians really introduced. Wearing zoot suits, smoking … probably dope as well, though I didn’t know. So many coffee lounges. The Negresco, the Top of the House, Copper Cat, the Plainsman – that’s where we played, it was a bar that had toasted sandwiches and steak. But it was strictly designed for the American [Operation] Deep Freeze guys, to bring their flasks in and order a Cola Kist – that was the precursor to Coke in New Zealand, an exact copy – and we played there five or six nights a week.”