I’m sitting in a white leather armchair in the sky-lit, eighth floor eyrie that is Sony Music NZ, waiting for Margaret Urlich to come back from lunch. Copies of NME and RIU look horribly out of place in this plush, swank interior. Suddenly I see a dark head in a green fur-trimmed jacket bobbing towards the reception desk. At the same time a besuited record exec rounds the corner.

“Have you seen the charts, Marg?” he hollers down the expanse of pale carpet. “Good stuff isn’t it?”

In Australia, she sold an astonishing 240,000 copies of her debut album ‘Safety in Numbers’.

Margaret Urlich murmurs agreement, the exec disappears and another one ushers her towards me. We shake hands and I follow her into a large, empty room. The exec offers us coffee, brings it in, hovers some more, switching on a heater in case Margaret is cold, for Margaret is precious cargo.

In Australia, she sold an astonishing 240,000 copies of her debut album Safety in Numbers. This makes her a fully bankable artist on her way to being a star. She’s already a celebrity in Australia, appearing on chat shows alongside Barnsey and Peter Garrett. Her success has bought her a certain amount of creative luxury – recording her new album Chameleon Dreams with different producers in LA, New York and London, filming the video for ‘Boy in the Moon’ in Paris. Also, comfort on tour: nice dressing rooms, flying rather than driving to shows and, on promotional visits to places like New Zealand, a suite at the Sheraton.

By New Zealand standards, she’s come a mighty long way from her days in When the Cat’s Away, let alone Peking Man. Australia has been good to her. Does she feel like an Australian now?

Margaret (whose part-Māori heritage is more evident in person than in her heavily made-up publicity shots: she looks rather like a young Kiri Te Kanawa) says no.

“There’s no Pacific Islanders there and I think that’s quite strange because my dad’s half Māori and I’ve always had that influence. It’s totally whitesville and that’s reflected in the music as well. There’s no soul music, it’s very much rock and roll. There are people who want soul music, but the radio stations won’t play it, it’s such a male rock tradition there.”

The record industry is famously male dominated and directed. Is she bothered by sexism over there?

“Well, in the long run I think intelligent, talented women can make it really big because that’s not expected. I mean, I don’t want to generalise but a lot of men are quite thick. Women can suss it and we can work on heaps more levels, so in a way being an underdog can work for you, you can come from behind because they don’t take you seriously. They’ve been taught that men are superior when in fact I think it’s the opposite. I think women are actually far more together on the whole. We’re practical – our mothers haven’t been wiping our noses.”

“I know. Don’t get me onto this topic but women would not do the atrocious things that men do to each other. Like in Yugoslavia, a woman would not set alight a building and wait for people to come out and shoot them. No one I’ve ever known or ever met would do that, and I think that’s the basic fundamental difference in men and women in that men can be so corrupt that they’ll do anything. What pisses me off is that it’s still happening. There are mass murders going on, concentration camps. I’m thinking fuck, man, we went through that, we should have grown out of that by now, boys.” 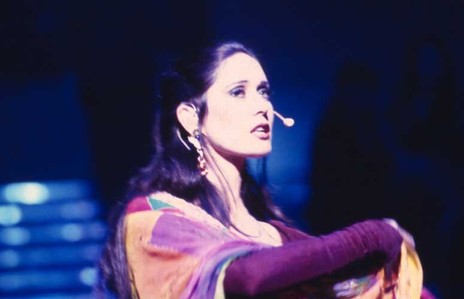 But you steer clear of such issues in your songs?

“Well, no, I write from a very personal angle and I’m not an issues writer. There are quite a few issues I’m concerned with. I’m quite concerned with mental health because I had a sister who committed suicide three years ago. Because I’m personally affected, I’ll talk about it if I think that what I say can maybe change one person’s opinion, but I’m not really a soap-box type of person.”

I was struck by a comment you made recently in a magazine that you had short hair for years because you wanted to be taken seriously. Me too!

“I got to the point where I thought, ‘Margaret, you’re attractive, why are you trying to make yourself not be attractive?’ Because I wanted to be taken seriously. It’s such a male-dominated industry that I didn’t want to be a bimbo. I’m a serious musician first, that’s my job, whether I’m male or female is of no consequence. But now I realise sexuality is very important to me and I have quite a powerful sexual thing – I can feel it on stage and that’s probably one of the reasons why I’m there because it’s as powerful as my personality or my intellect. So now I’ve realised – thankfully it’s not too late.”

“I’m a serious musician first, that’s my job, whether I’m male or female is of no consequence.”

And when you’re young and sensitive, the way men look at you can make you feel vulnerable.

“Yeah, it’s the voyeuristic thing that I never liked about men. Photographers can be a bit like that which is why I prefer working with female photographers ...”

The lens as an extension of the penis.

“I feel uncomfortable with men looking through the lens at me. With women you know they’re not playing games, they’re just trying to do a good job and take a good shot and you know they’re not thinking ‘I want to get into your pants after the shoot’. The thing about working with men is, you just don’t really know what their motives are. Not all men, but a lot of times you think ‘how are they going to portray me?’ Because male and female ideas of sexuality are totally different. What a man thinks is sexy I don’t think a woman thinks is sexy.”

Margaret describes herself as extremely ambitious, although sitting here in a big chair, speaking earnestly about serious subjects, it’s hard to imagine her ever turning into a claw-fisted prima donna.

“I’m very much a plodder,” she says, “and small personal battles to me are the best. Overcoming being shy – as a kid I was quite neurotically shy – stuff like that. Personal fears are the best to overcome and I’ve done a lot of that in the last three or four years, ever since I got into music. It’s been a real blessing otherwise I would have been stuck being a nurse or something, which is a good job but I wouldn’t have been happy and I probably wouldn’t have grown much as a person.”

Gone are the days when Margaret would demur on being told what a good performer she is.

“I didn’t believe it, until quite recently. It’s just your upbringing. I wasn’t brought up to think I was any good.”

Does she feel bitter about her upbringing?

“No. It wasn’t perfect for me because I had a lot of brothers and sisters and I didn’t really get enough attention. Bringing up a child, if you want a happy being, you’ve really got to nurture it. I love my parents very much but I don’t think that I really got enough of that. But in one way it works for me. Sometimes I think ‘why the hell am I doing this?’ ’cos it’s quite hard work. I’ve got this thing in me that I’ve got to, because people pay to come to see me.”

At this point the tape clicks to an end and one of the Sony men opens the door to tell me that my time is up. TV3’s Nightline awaits Margaret, and much more besides. As for me, it’s time to exit the rarified world of the international music trade and trudge back up Symonds Street in the pouring rain. Another day, another couple of dollars.

This first appeared in Rip It Up, No.183, October 1992, and is republished with permission.