Knightshade was arguably Hamilton’s biggest band during the 1980s. Local photographer Karen Ford first met Knightshade’s frontman Wayne Elliott through the sound hire company Musicare. “I became a regular at Knightshade gigs and with access to all areas, I soon felt like part of the furniture,” she recalls. “They became accustomed to me, the camera and flash gun pretty well, which enabled me to get right up close.” She remembers the classic line up as being:

“Accomplished musicians, a tight ensemble, playing stonking, well-crafted tunes, and they had a collective stage presence that exuded joy and positivity and connected meaningfully with the fans. They were a slick outfit too, and I got the impression everything was carefully thought through: the costumes, styling, the set and ongoing communication with their fans. Wayne was a great front man but always worked the stage and crowd in a way that highlighted the talents of each player during solos and instrumental breaks. They were also a nice bunch of people, and I think audiences picked up on that too.” 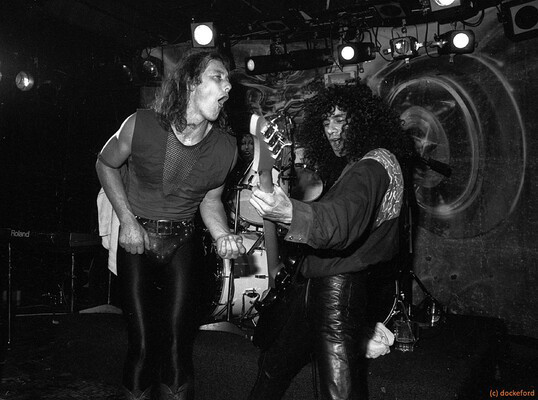 Karen: “I don’t recall taking this one or enlarging it back in the day, but am at a loss as to why – perhaps because I cut off their feet! I used to position myself to capture the band in full flight, wait for the right moment, then press the shutter and hope that I had captured something like this. For me, it personifies the energy and positivity that the band always delivered – no matter what – and the on-stage interaction that was a feature of their performance. This made them easy and delightful to work with.” 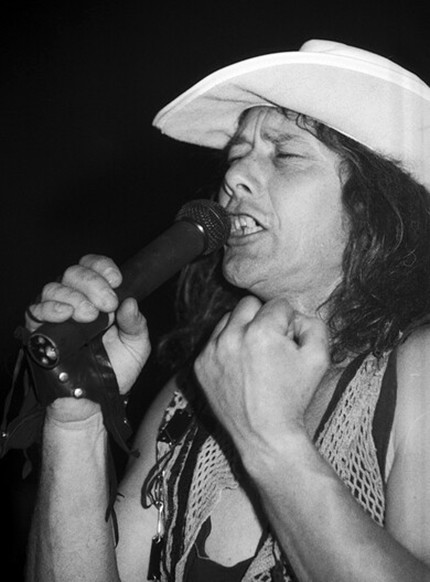 Karen: “This is how I remember Wayne – as a top flight vocalist who was never afraid to bear it all for the fans.” 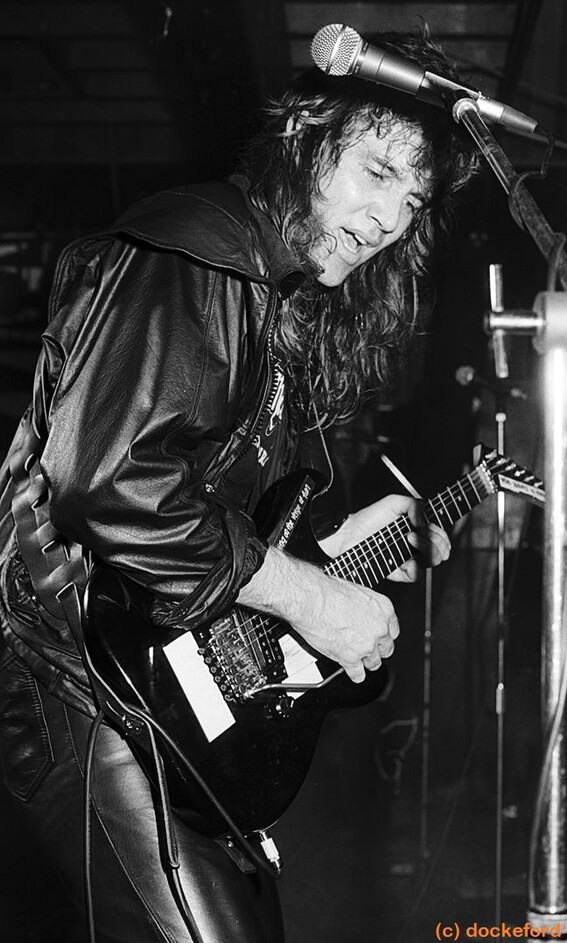 Karen: “This is one of those shots I laid in wait for. I wanted to capture the intensity of Rik’s solo and the texture of that fabulous leather jacket under the par can light, and I was so pleased with the result that I made a 16 x 20 enlargement for my own collection where it remained until 2018 when I returned it to the Tron, and presented it to Rik some 30 years after it was taken.” 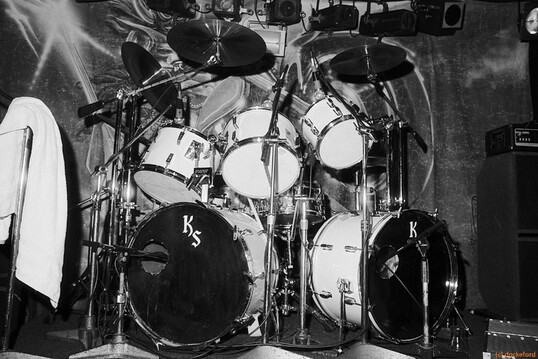 Karen: “The full kit – taken just before the boys came on. Chrome and skins with towel at the ready!” 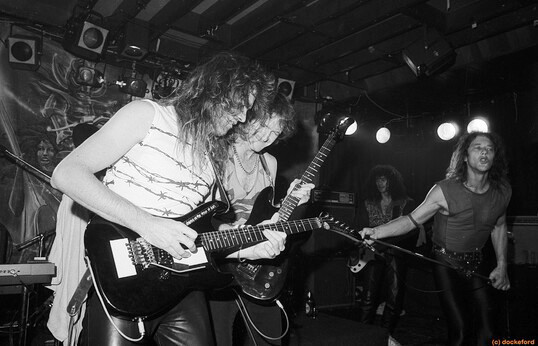 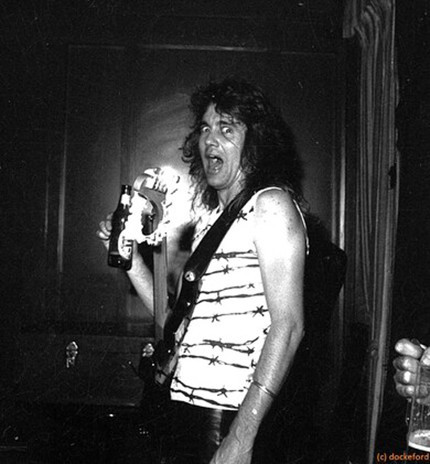 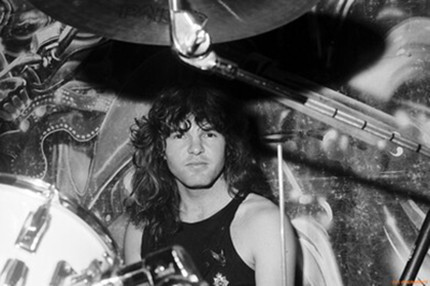 Karen: This is the only photo of Alan I have where he isn’t playing. I think he had just settled at the kit at the start of the set. I called his name; he heard me, looked my way; I pressed the shutter. A serendipitous shot of the calm before the storm. I still have this in my 10 x 8 handprinted portfolio. Karen: “This was taken after I had positioned myself in the green room during the final song of the night so I could capture the backstage action as it happened immediately post gig. It was a hive of activity involving towels, hairdryers and various refreshments and the occasional visit from a family member or friend.” Karen: “Another taken from a backstage vantage point.” 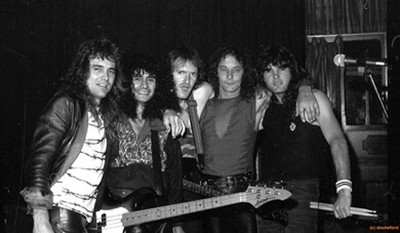 Karen: “Hands down! I intercepted the boys as they were about to go on or come off stage saying ‘what about a group shot’ and they obliged. The Hillcrest didn’t have a proper backstage area so these are taken from the side behind the curtain. This is one in a series of three images and the only ‘posed’ shots I ever took of them together. This is the better of the two ‘sensible’ hands-by-sides shot – the one they chose and occasionally used for publicity has their hands in the air (after I asked them to do something less serious!)” 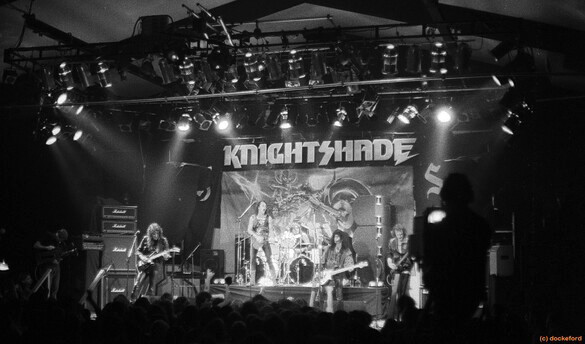 Radio With Pictures live special. Karen: “My access was limited to front-of-house for this gig, it was a smoky affair with photographic obstacles a plenty – I was unhappy with them at the time, but recognise their historical value now and like the atmosphere created from the stage and broadcast lighting. 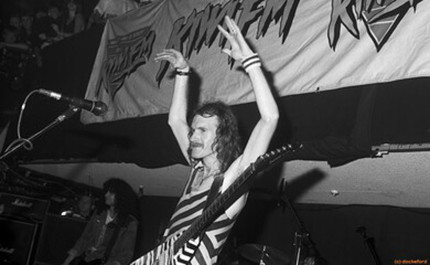 Karen: “Put ya hands in the air! – Gavin getting the crowd involved and they were well up for it!” 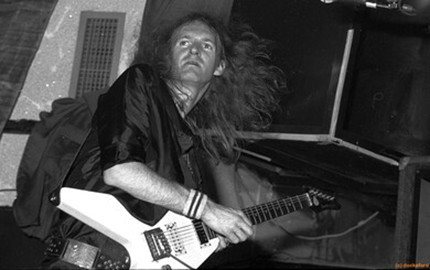 Gavin Lind about to give a Flying V some throttle.

Karen: “A good head of hair provides numerous photographic opportunities, and there was no shortage of those – in this case to capture movement in the moment.” 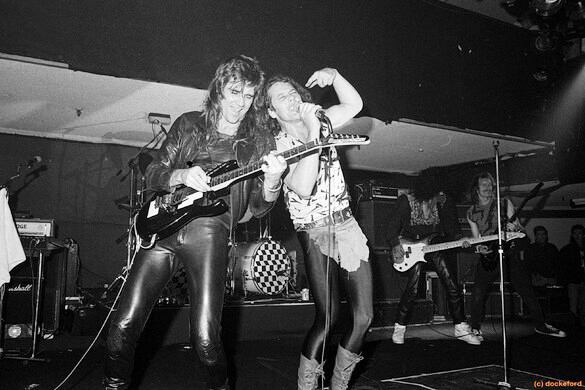 Karen: “Sharp-dressed men. Wayne and Rik’s costumes were aesthetically pleasing, at the cutting edge of fashion and made for enhanced photographic opportunities. Sue (aka Sioux) Pryor was the driving force behind the styling. It’s only now that I have come to appreciate how ahead of the times her ideas were and how her contribution enabled mine.” 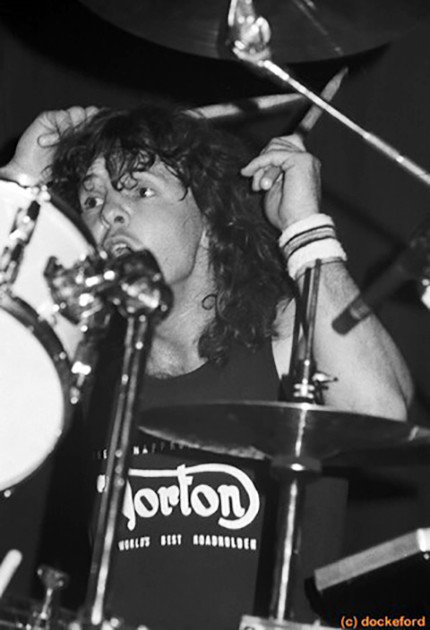 Karen: “Action Alan. Always seemed naturally at ease with the camera, although I never asked.” 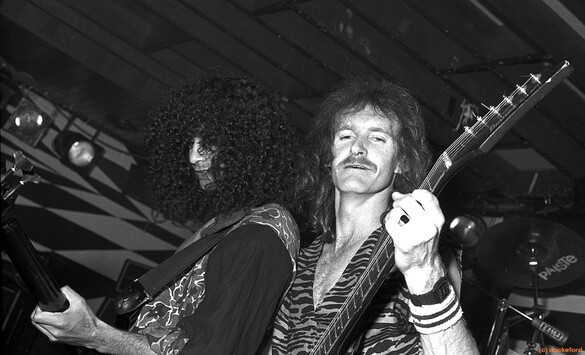 Karen: “Comrades in arms. I have a number of Gavin on his own but this is how I strived to capture him – in the moment and his element. I suspect he was the least comfortable with having a camera and flash up close (although I never asked). He was also a graphic artist and his caricatures featured on their signed Christmas cards, along with his razor-sharp wit. I still have mine.” 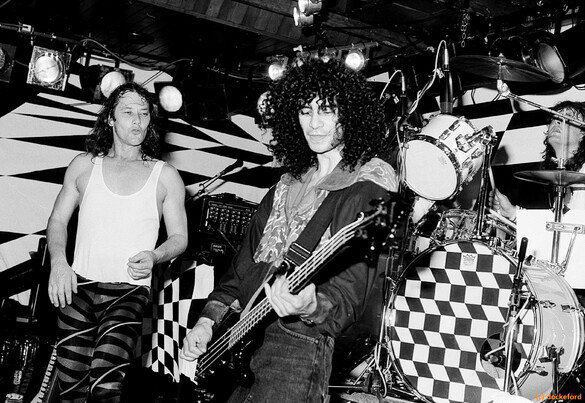 Karen: “Solid as a rock. Jon laying it down.” 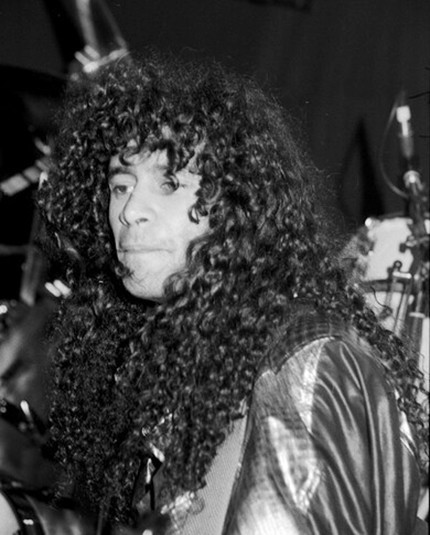 Karen: “A portrait of Jon in deep concentration with his textured mane – with bass out of shot – I have no others like it.” 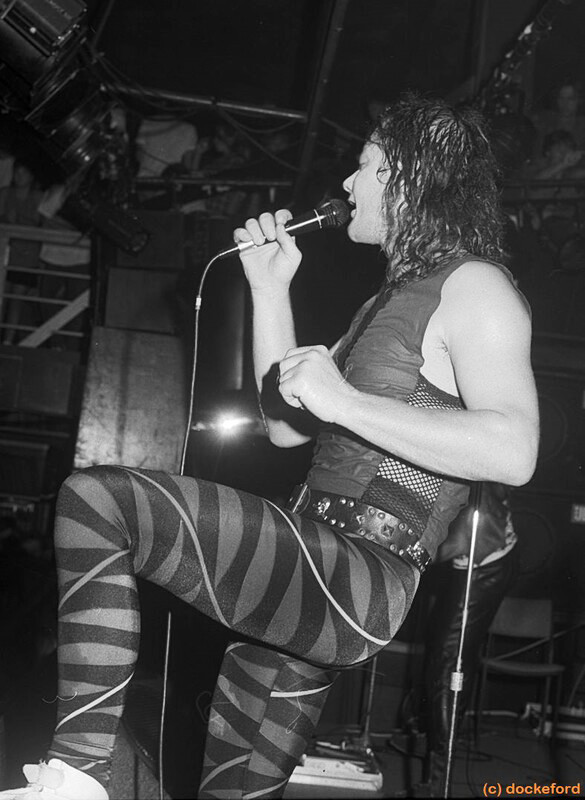 Karen: “Wayne was dynamic – there were endless opportunities to capture him on the move, he gave space to others, able to be front, centre and to the side, he had an intuitive sense of place on the stage.” 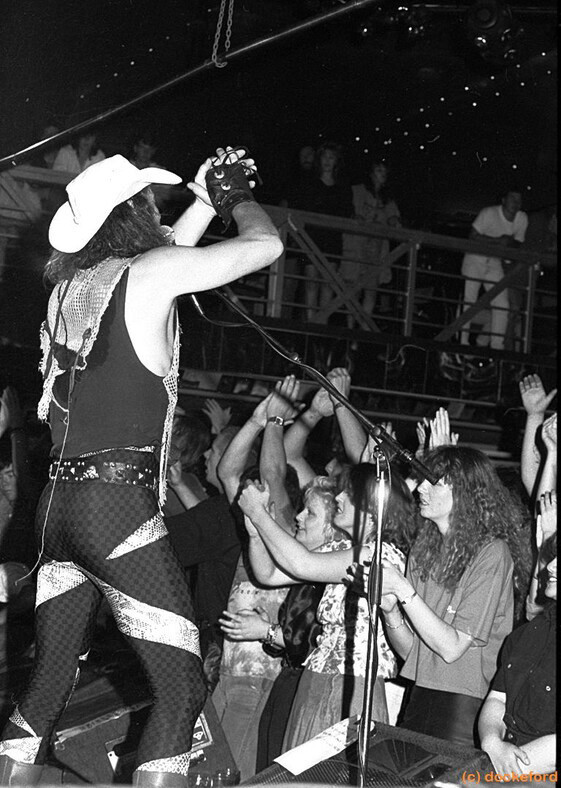 Karen: “That costume hasn’t dated IMHO, neither has the music.” 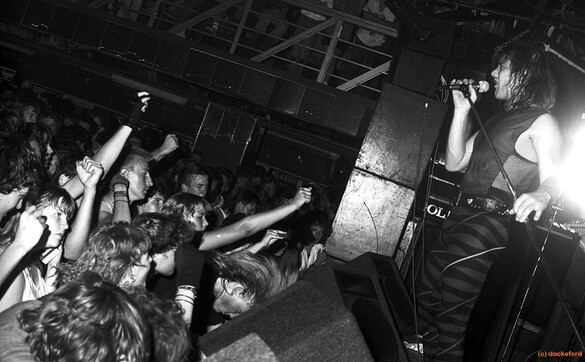 Karen: “The ‘Knightshade Brigade’. This is a ‘new’ favourite which I overlooked first time around. It captures the energy of the fans in all their glory. I particularly like the commitment of the headbanger who appears to be going for it on the monitor.” 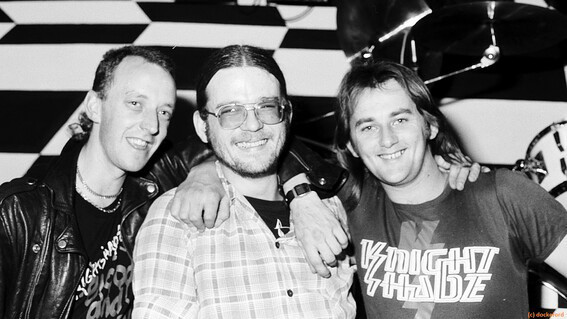 Dave McIvor (left) and two other members of the Knightshade support team.

Karen: “A trio of crew. Knightshade attracted the brightest and the best.  One of my few posed crew shots taken at the end of the gig before that pack down work began.”

More photographs of Knightshade by Karen Ford can be seen here, and more of her Hamilton photos here.