Kawana Pohe of the Māori Hi-Five

Kawana Pohe of the Māori Hi-Five

As an arranger and multi-instrumentalist, Kawana Pohe – who died on 4 December 2021 – was crucial to the sound of the Māori Hi-Five. This tribute to Pohe was written by Rob Hemi, a fellow member of the Māori Hi-Five, and was included in Suzanne Ormsby’s 1996 thesis on Māori showbands.
--
No information is at hand on Kawana’s early life. He grew up in Taihape, and Putiki across the river from the city of Whanganui. According to notes recorded by Sue Ormsby when she visited Kawana, his partial blindness was caused by a kick in the head on the rugby field, which resulted in his being admitted to the Auckland Institute for the Blind in Parnell. Kawana told Sue that as a child he used to lie on the ground under a big tree and dream of one day going to America. 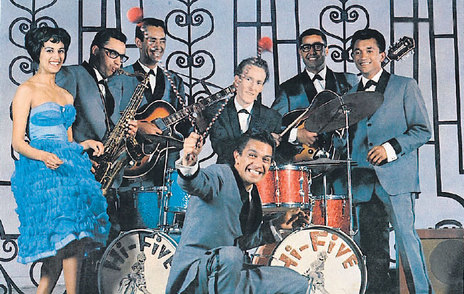 I first met Kawana at a hui in Ruatoki in 1957, and we played in the concert held one night, along with Ike Metekingi. Kawana played sax, in a style that made the hair stand on the back of your neck. My perception was that he was musically talented, borne out by the fact that he played a beautiful rendition of ‘Nola’ on guitar next time we met at Turangawaewae some months later in 1957.

KAWANA POHE GAVE THE MĀORI HI-FIVE “A LIFT THAT PUSHED US OUT OF THE ROCK’N’ROLL CLASS.” – ROB HEMI

Our next meeting was in Wellington, in the early days of the Māori Hi-Five when we secured Tuki Witika as our drummer and Ike spoke of getting Kawana down from Auckland also. As Kawana was in the Blind Institute, this was a fairly delicate matter. We, as a group intending to going overseas and seek our fortune, undertook in a letter to take him with us and see to it that he got an operation on his eyes. His release was effected and he travelled down to Wellington with Tuki.

It appears that Kawana may have learned his instruments at the Blind Institute, but the talent was present to begin with, and the drive was there to see it develop. Kawana, to my mind, brought to the Fives a talent that fitted snugly into our groove. His sax work was electrifying, he played any instrument that was available, and he could arrange music. He had a business head which became of great benefit to us. All in all, Kawana gave to the Fives far more than we were able to give to him.

His interest in things was clearly evident from the start, sometimes to the point of making me wonder if he would ever stop reading any material he was studying – my thoughts were that it took so long because his sight was impaired. What it took me a long time to realise was that he was sifting all the information through and through, deliberately and in fine detail, probably determining its worth in relation to himself and his future. Upon reflection, he thought far more deeply about things than perhaps the rest of us did. Observation revealed that his sight was fairly reliable, once he had done a swing round the block and got his bearings. However, he still carried his collapsible white stick which he used to guide himself through shop entrances, and out again, revealing a keen sense of psychology. 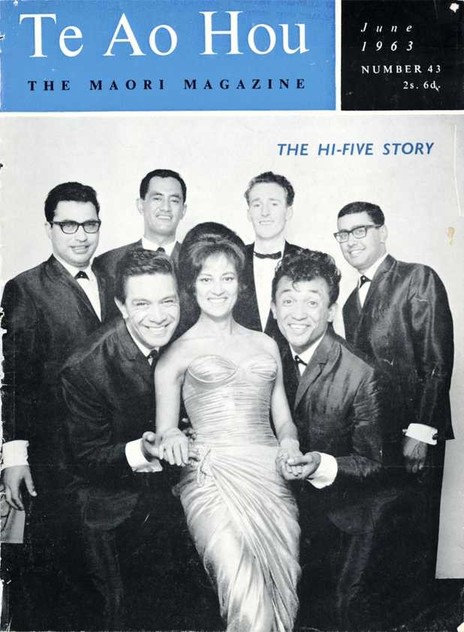 A couple of stories will illustrate how he operated. We lived for a time in the VIC hotel in upper Cuba Street, Wellington, and Kawana had an upstairs room fronting onto the street. Below was a radio shop. As an attraction, the owner had attached a magnetic button to the inside of the window, with a wire running down to a flash radio. By touching the glass over the magnetic plate, you could start the radio and listen to it, a slick bit of selling technique in those days.

So our man taped a length of wire over the plate, lay in his bed holding the other end of the wire and had free music until he went to sleep. When he’d had enough he yanked the wire and all trace of the skulduggery was removed. We were sitting talking one day and a comment was passed that if Kawana could only drive a vehicle “he’d be dynamite!” Well, as fate would have it, he was seen on two occasions driving a vehicle (one being a Honda motorbike to my knowledge) and we could truly say he was “dynamite”.

My association with Kawana has been happy and inspirational. A lot of the material he brought into the Fives was of a high standard and, from my position as rhythm guitarist, gave us a lift that pushed us out of the rock’n’roll class. One only need listen to our early recordings and hear tunes such as ‘American Patrol’ to understand what we attempted in those days. Whenever he blew the first notes of ‘Jungle Drums’, hairs would stand on the back of the head without fail. His notes mention that he was the first one at the Blind Institute to master the entire sax part of ‘Jungle Drums’.

A fuller account of Kawana’s life will no doubt be included in later publications, as time and circumstances permit. At this time [1994] he has just had, or is having yet another eye operation – perhaps his last in a series of operations going back almost 40 years. These days Kawana runs a business in Boulder City, Nevada, and plays host to a continual stream of visitors from New Zealand. He keeps regular contact with the Hi-Five members and many others as well, a solid testament to the interest he has in everyone. Regarding Kanawa’s eye operation, I visited him in hospital while he was still in bandages and talked with him. He held my hands in his and talked away for a while. My feelings, looking back, were that he was not so much worried that he was unable to see, but that there was a bond unspoken and unbreakable. Since then, Kawana has had several eye operations. In spite of these operations, he did sometimes have mishaps. Being used to his ability to cope, we were never quick enough, or perhaps near enough to prevent these occurring. One such incident was in Hong Kong, where he walked through a plate glass door and emerged relatively unscathed. In Sydney he walked over the front of the stage and dropped to the floor, four feet down whilst blowing his sax. Again, he emerged relatively fairly intact.

--
Rob Hemi, who died in 2007, was a guitarist in the first incarnation of the Māori Hi-Five showband, alongside Kawana Pohe. Suzanne Ormsby’s MA thesis is Te Reo Puoro Māori Mai I Mua Tae Noa Mai Ki Inaianei/The Voices of Māori Music: Past Present and Future (University of Auckland, 1996); she interviewed Kawana in December 1995 in Boulder City, Nevada.

On hearing of the passing of Kawana Pohe, Ormsby wrote to AudioCulture, “His blindness was never a handicap. He always got to do what he wanted to do. Nothing phased him.” On Facebook she said, “Your contribution to the Māori music industry, along with your fellow Hi-Five musicians, was nothing short of amazing in terms of talent, musicianship and achievement on the world stage. Your whakawhanaungatanga with the expat Māori music community in America and around the world was generous, inspiring and always inclusive.”

Thanks to Suzanne Ormsby.