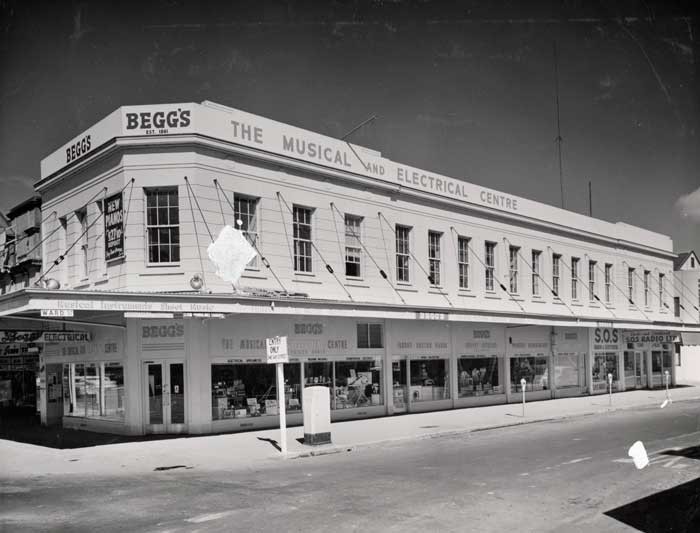 In 1943 the Begg’s chain of stores ran a series of advertisements in the New Zealand Listener titled “The story of music in New Zealand is the history of Begg’s”. An ambitious claim you may think but consider the 110-year history of Charles Begg & Co Ltd or – as it was better known – Begg’s. 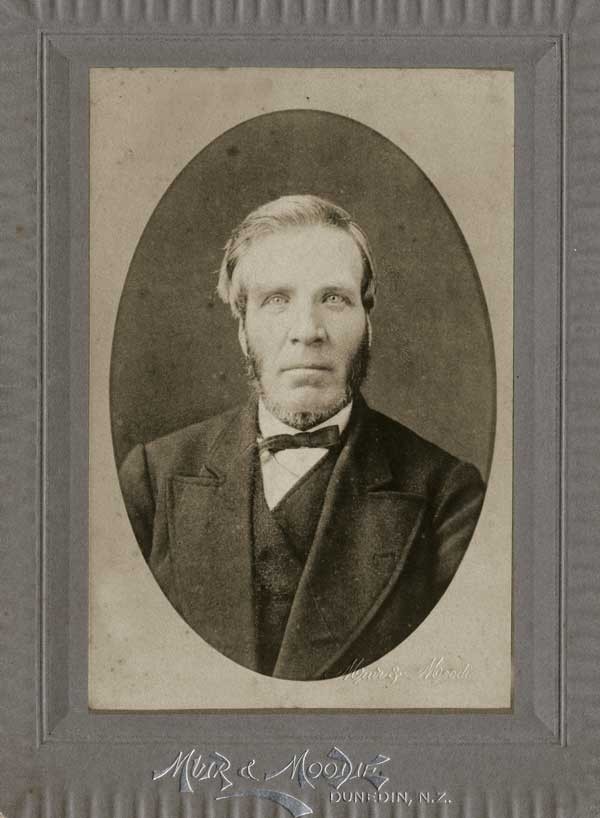 In 1861 Charles Begg, an Aberdeen pianoforte maker and tuner, landed in Dunedin with his family and four pianos, fortuitously coinciding his arrival with the discovery of gold in Otago. Legend has it that he started tuning pianos the day following his arrival, and he soon established premises in Princes Street. 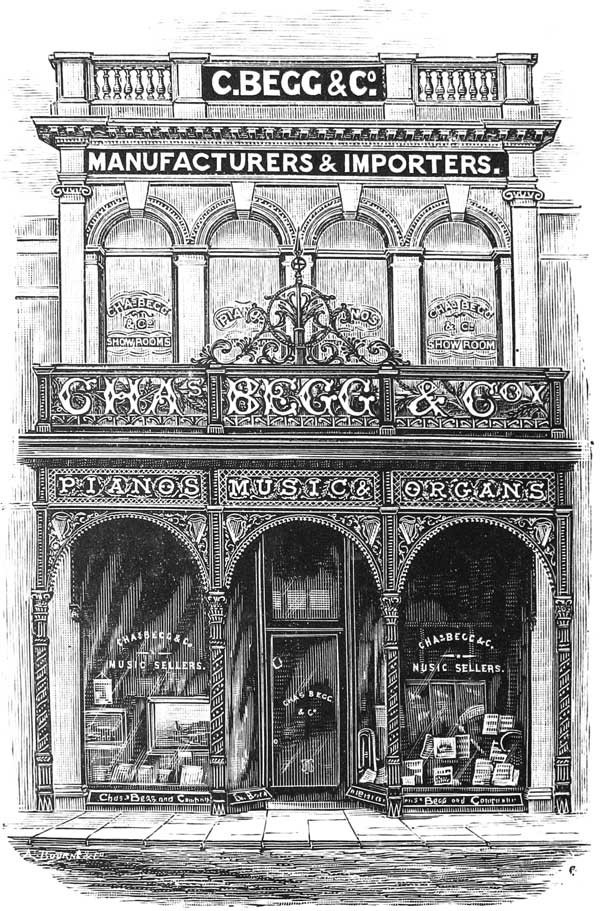 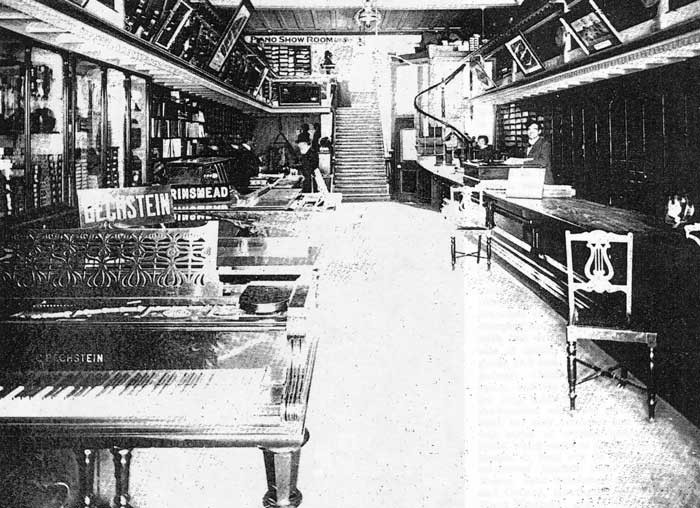 The ground floor of Begg's Dunedin in the late 1800s

Looking back it is difficult to appreciate the importance of the piano in 19th century New Zealand. A prized and keenly sought after possession, the piano was the centre of music-making domestically and a vital part of public performances, in fact most aspects of musical life in the colony. 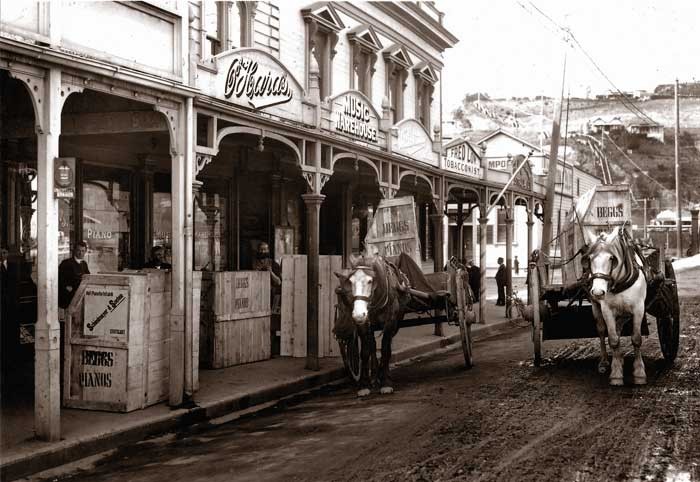 Charles Begg’s business was at the heart of Dunedin’s musical scene. As well as pianos his premises supplied all the necessary instruments, music and accessories for music-making in the city, provided space for rehearsals for Dunedin’s first orchestra and other musical groups, and was a contact point for musicians, music teachers and performers. The business also ran an extensive piano tuning-operation in the lower South Island. 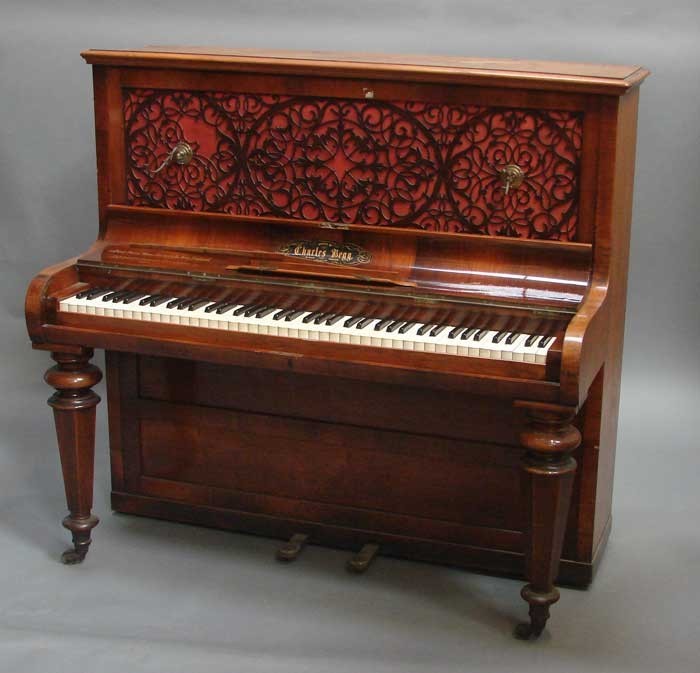 The 1865 Exhibition piano, the first piano made in New Zealand and made by Charles Begg himself

Charles Begg continued his piano-making trade in Dunedin, winning a medal with a piano made of New Zealand woods at the 1865 New Zealand Exhibition; the piano is now in the Otago Settlers Museum. Shortly after the exhibition, however, he decided to forego manufacturing pianos and rely solely on imports. 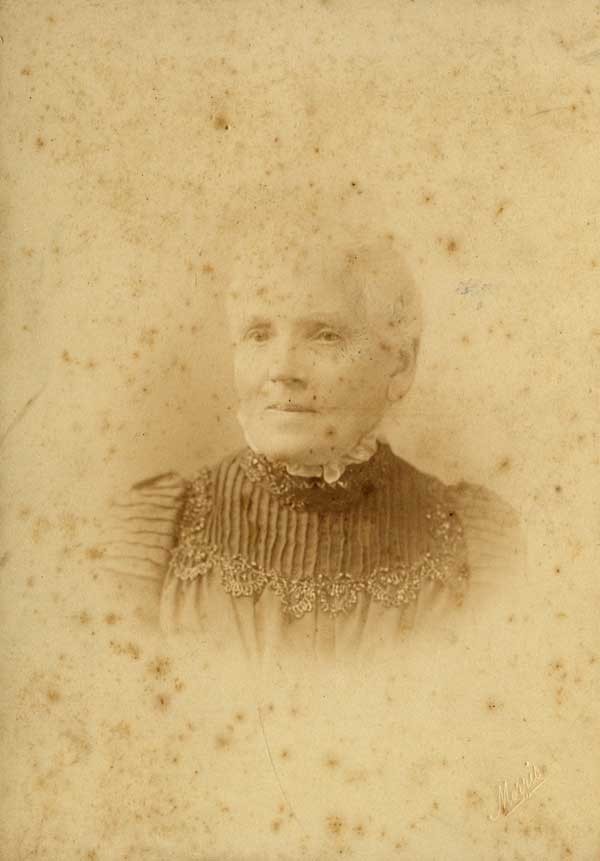 Jessie Begg, Charles Begg's wife, who took over the business in 1874 and ran it until 1896

In 1874 Charles Begg died, leaving his wife, Jessie, to manage the business until their sons Alex and Charles were old enough to take over in 1896. During Jessie’s management the company expanded, opening branches in Timaru (1885) and Wellington (1893) and using agents in other cities and towns to sell pianos and music on their behalf. Music was an important part of New Zealand’s social life and Begg’s supplied not only instruments and music to individual musicians, bands and orchestras but sponsored musical competitions and examinations and brought in artists from overseas.

A  celluloid Begg's bookmark, issued circa 1905 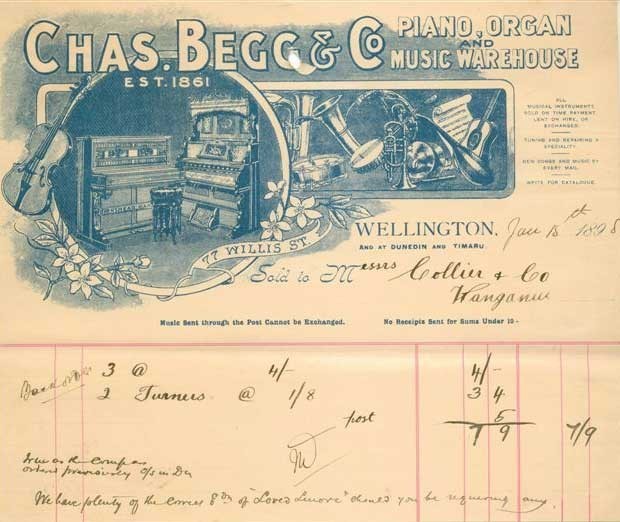 An 1898 invoice from Begg's Wellington to the Collier family in Wanganui, 1898. A descendant, Helen Collier, is a prominent concert pianist and teacher in the Rangitikei area

Under the next generation’s management Begg’s continued to prosper and in 1904 opened a London office to facilitate business with companies in Britain and Europe. They also opened branches in Invercargill (1900), Waimate (1908), Oamaru (1910), Nelson (1910), Ashburton (1916), Christchurch (1920), Rangiora (1925), and Auckland (1928). The piano remained an important part of the business but times were changing and musical innovations meant the business changed too. The invention of the phonograph enabled New Zealanders to hear the voices of Caruso, Melba, Patti and others in their homes. Always quick to embrace new technology, Begg’s sold the machines from early in the 20th Century and set up special phonograph parlours in which customers could listen to recordings before purchasing them. 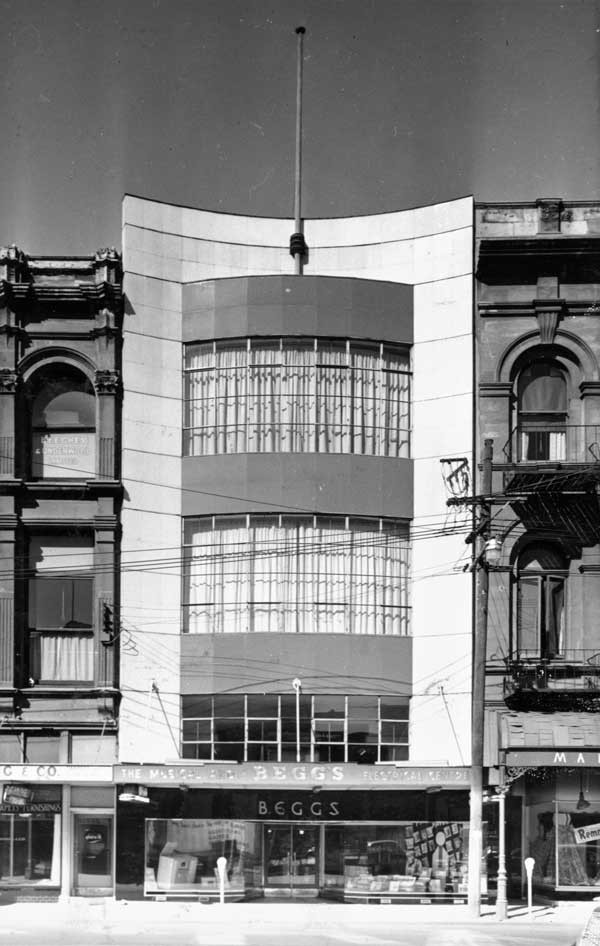 Begg's Christchurch branch in the late 1950s. The purpose-built premises opened in 1941

Pianos and music to play on them were still a major part of the business; in 1925 Begg’s imported 4,392 pianos from Britain alone and they also imported pianos from Germany. Although Begg’s had long ago abandoned manufacturing pianos from scratch, they still assembled pianos in their piano and gramophone factory in Filleul Street, Dunedin, which at the height of its production in the 1920s employed over 40 staff. Player pianos were another innovation and these became hugely popular in the 1920s with Begg’s selling large numbers of the pianos and the piano rolls to play on them. 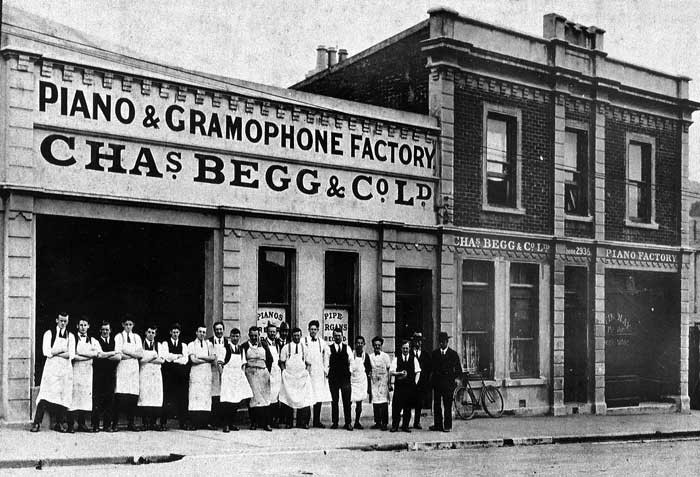 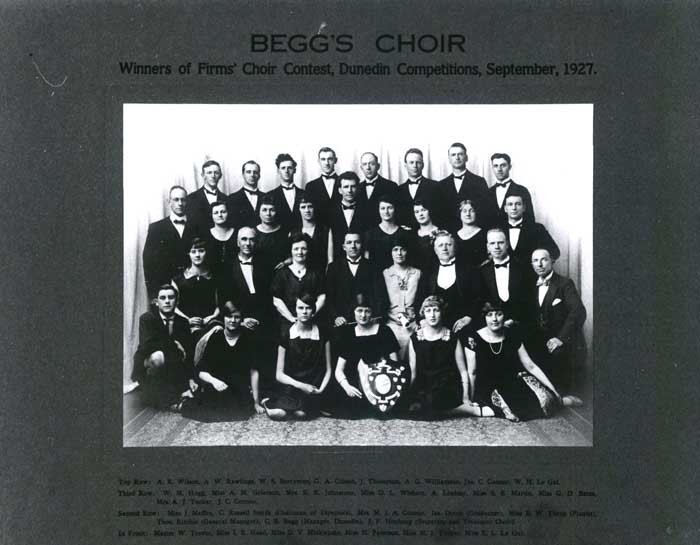 Printed music was always an important part of Begg’s business. To satisfy the demand for the most recent songs and tunes the shops stocked thousands of pieces of sheet music imported from Britain, the USA and Australia. In addition the business published a substantial amount of sheet music in New Zealand. Initially these compositions were local editions of overseas pieces but in 1868 Begg’s began publishing original New Zealand compositions and was the largest publisher of original New Zealand compositions until 1970. Although most had only a small print run several became extremely popular. The famous rugby song ‘On the Ball’ – first published in 1895 – ran to several editions and was sung at rugby matches for decades. After the outbreak of war in 1914, Begg’s acquired the right to publish and promote ‘God Defend New Zealand’ and in 1925 purchased the copyright, which it sold to the New Zealand government in 1940. 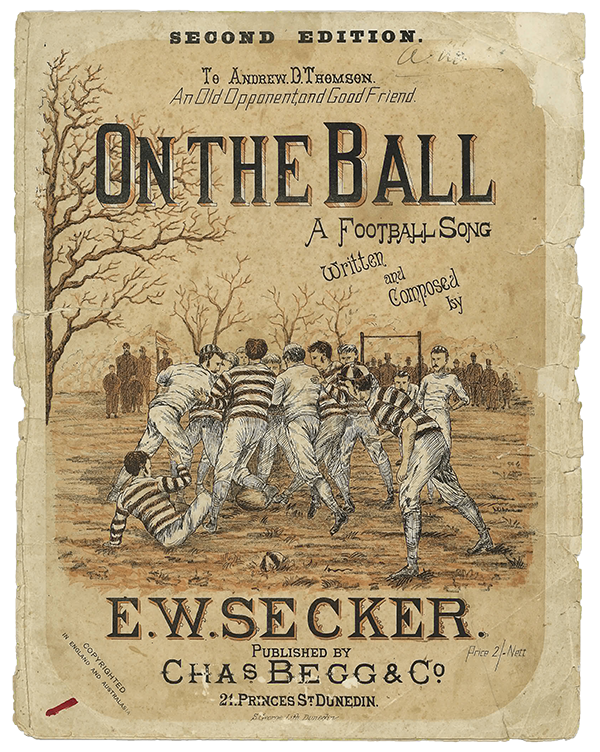 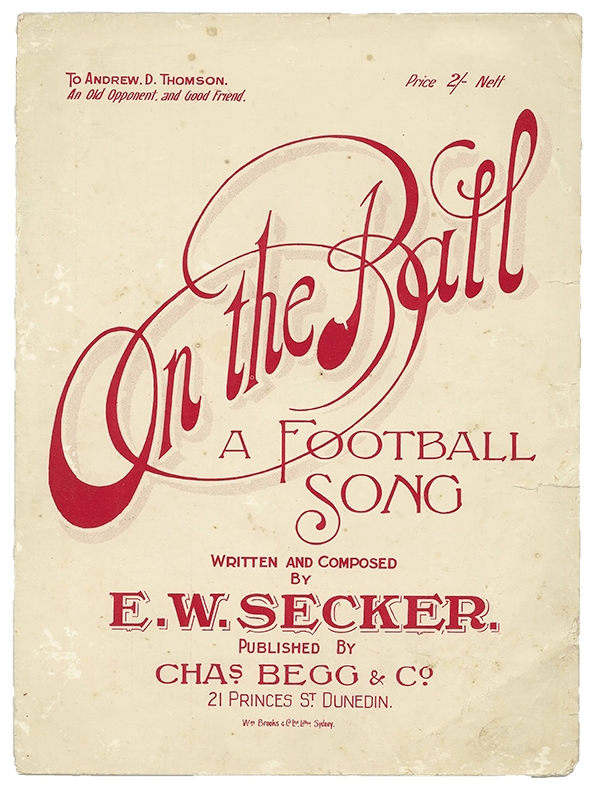 Two editions of the rugby classic 'On The Ball' sheet music, written by Manawatū accountant Edward Secker in 1887 and published by Begg’s,. 'On The Ball" was New Zealand’s first international hit song. This is a later edition, and above is an earlier second edition printing. Courtesy Music Heritage New Zealand

Below: two original New Zealand piano pieces, published by Begg's c. 1944. 'Flower Fancies' is by Ernest Jenner, and 'Patricia Dances' by Henry Shirley. 'Buds and Blossoms' is one of many pieces written by Adrian Hope, the pseudonym of Gore composer James Brown. He also used the name Raymond Hope 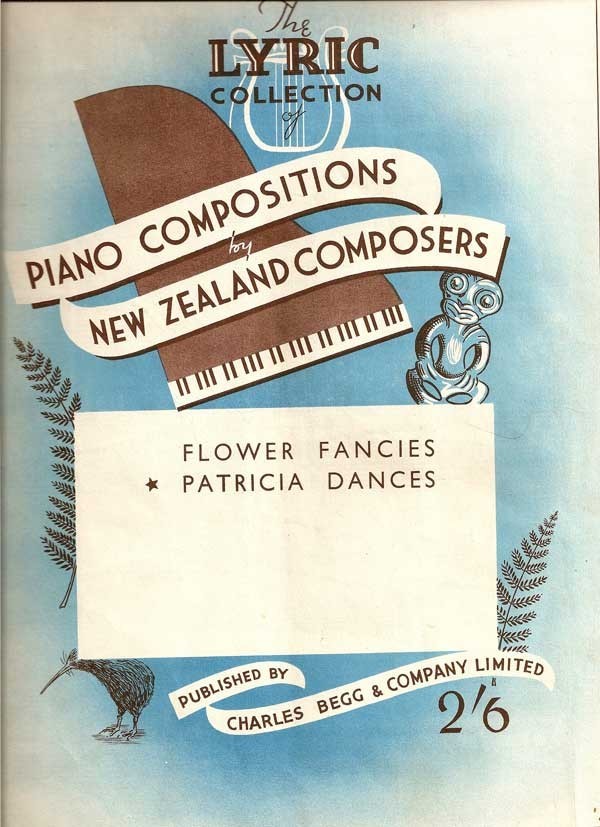 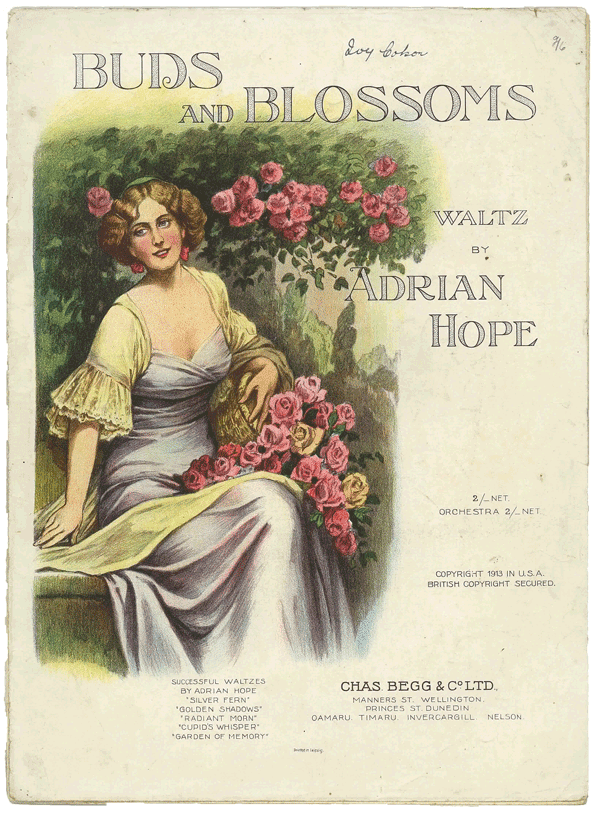 During the 1930s and 1940s Charles Begg’s grandson Eric Begg was at the helm and the company diversified and expanded further. A branch in Auckland had opened in 1928 and in 1937 Begg’s bought the old Auckland business of Arthur Eady. The old Eady premises were demolished and a multi-storeyed building erected with multiple departments selling Begg’s wide range of products, as well as facilities for concerts and teaching studios. Similar premises were developed in Christchurch and opened in October 1941 to coincide with the 80th anniversary of the arrival of Charles Begg in New Zealand. Branches were opened in Palmerston North and Hamilton in 1943. 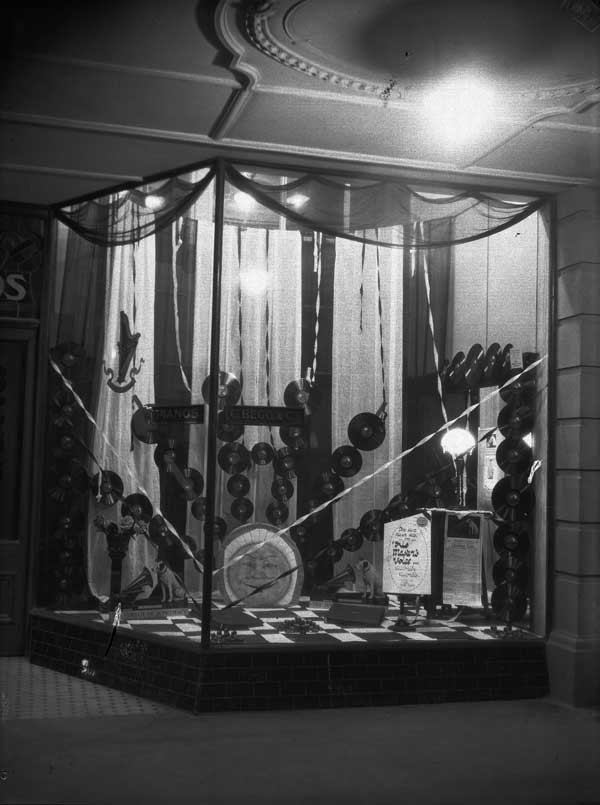 Display of HMV records, in the window of Begg's Christchurch, circa 1920 - Alexander Turnbull Library 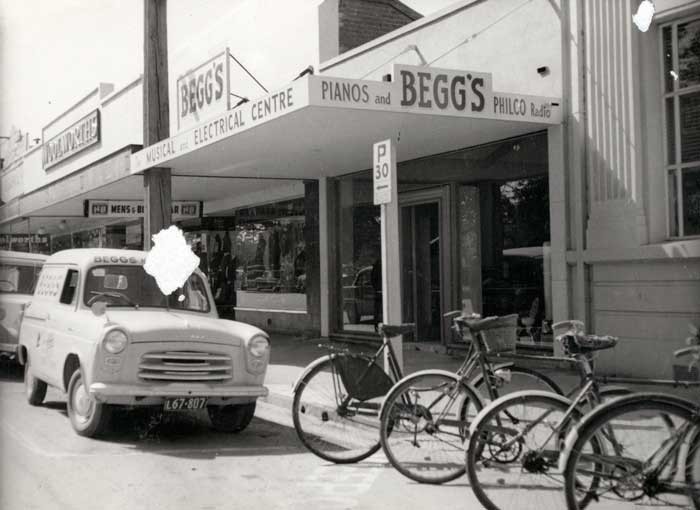 Another new technology, radio, was first transmitted in New Zealand in 1921. Begg’s began selling radios shortly afterwards and in 1930 became the agent for Philco radios. The 1936 Labour Government brought in strict import restrictions which made it difficult for Begg’s to import enough Philco radios to satisfy demand. After obtaining a licence from Philco in the US to assemble radios in New Zealand, they purchased the Dominion Radio and Electrical Corporation Ltd in Otahuhu and began assembling radios there in 1940. Philco became one of the most popular radios in New Zealand. 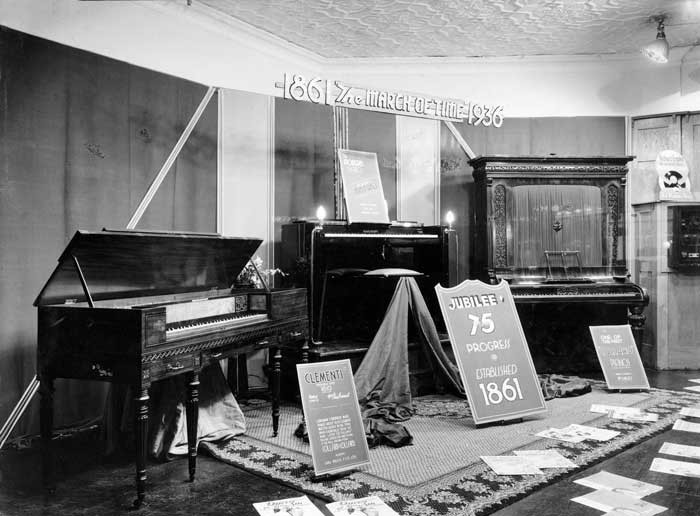 Other agencies were obtained from the USA and Canada and Begg’s diversified further to sell washing machines, refrigerators, vacuum cleaners, hearing aids and other electrical goods. However, music remained the core of the business and Begg’s continued to encourage musical activity with competitions, sponsorship, prizes and awards.

In 1939 Begg’s employed a Dunedin teacher, Bill Coulter to organise and run a “Musical Army” for them. The “Army” provided cheap group tuition to anyone who wanted to learn the guitar, ukulele, banjo, mandolin, piano accordion or percussion. Students could hire the instruments from Begg’s if they didn’t have their own. At the end of each year the Army held a concert in the Dunedin Town Hall, marching along Princes Street from Begg’s clutching their chosen instrument. Musical Armies were also founded in Christchurch, Wellington and Auckland but the Dunedin Army was the most successful, running for 35 years. In 1959 an anniversary concert was held and it was estimated that between 2,000 and 3,000 pupils had passed through the Dunedin Army’s ranks. Begg’s Musical Army was the starting point for many well-known New Zealand musicians’ careers. 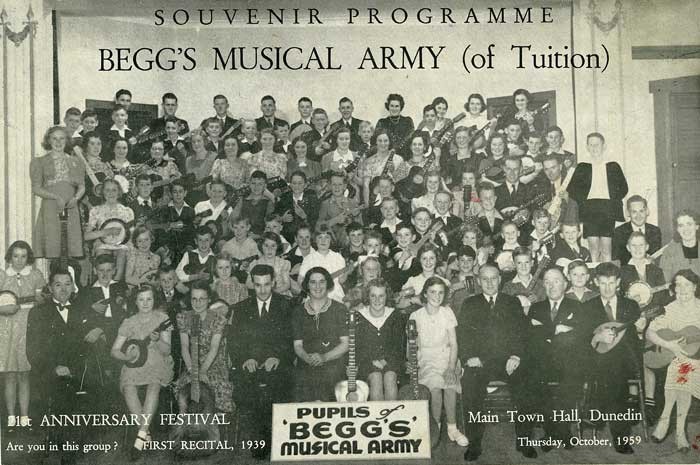 The Begg's Musical Army, 1939: a performance group  formed from the firm's many music pupils. This was the cover of a 1959 programme for a 20th-anniversary recital at Dunedin Town Hall. 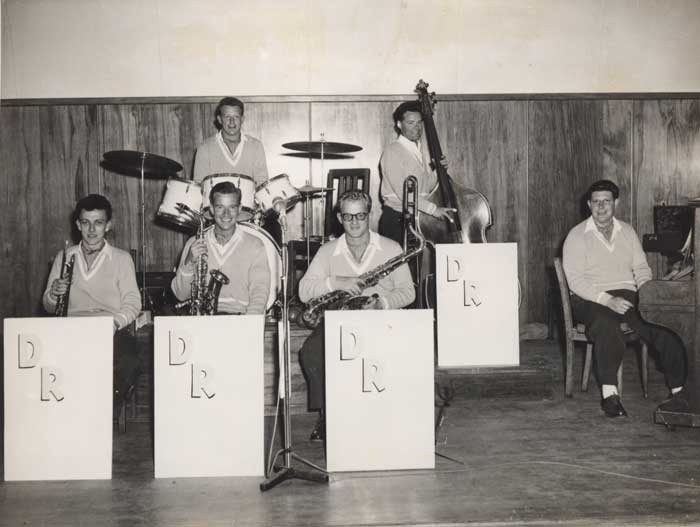 The Don Richardson Band, pictured at Caroline Bay, Timaru, in the summer of 1955-1956. At the back, Vern Clare and Graeme Saker. In front, Mike Gibbs, Johnny Williams, and Don Richardson. At the piano, Bob Barcham. At various stages, Clare, Williams, Richardson and Barcham worked at Begg's, Wellington. Gibbs, who played jazz and classical trumpet, joined the NZSO as a teenager - Chris Bourke collection.

In 1943 Begg’s donated money to the University of Otago to fund a scholarship to encourage music teaching as a career and Charles Begg prizes in music are still awarded annually at the University. In the same year the Begg’s Composers’ Competition was introduced, with the winner promised publication of his composition by the company, as well as a cash prize.

Begg’s Celebrity Artists was launched in 1946, formalising the ad hoc promotions by Begg’s in its earlier years bringing overseas acts to New Zealand. The tours of Australian tenor Peter Dawson, and the British duo Webster Booth and Anne Zeigler were wildly successful (the latter were notoriously difficult to please during their visit). 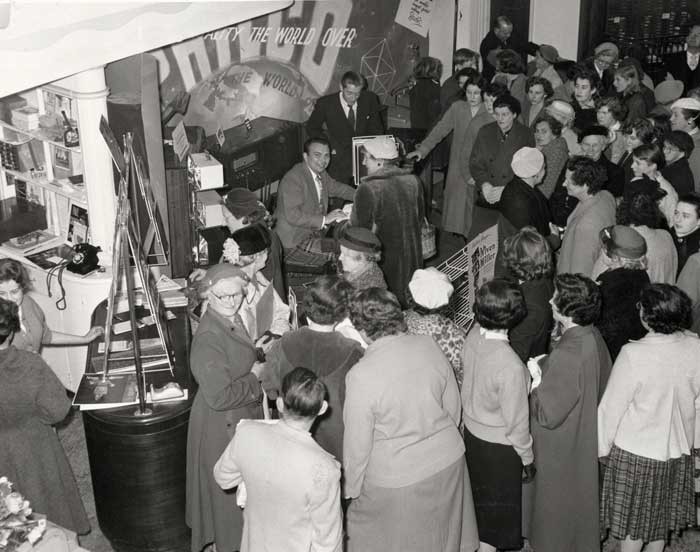 Through the purchase of Arthur Eady’s in 1937, Begg’s acquired the copyright to many well-known New Zealand pieces such as the ‘Nikau Waltz’ and ‘Haere Ra’ (‘Now is the Hour’), which became a huge international hit when sung by Gracie Fields and Bing Crosby. During World War II Begg’s published hundreds of pieces by arrangement with overseas publishers to enable New Zealanders to access the latest in music. They also continued to publish original compositions such as ‘Blue Smoke’, published in 1947 and recorded the following year by Pixie Williams (the song was recorded again in 2015 by Neil Finn). 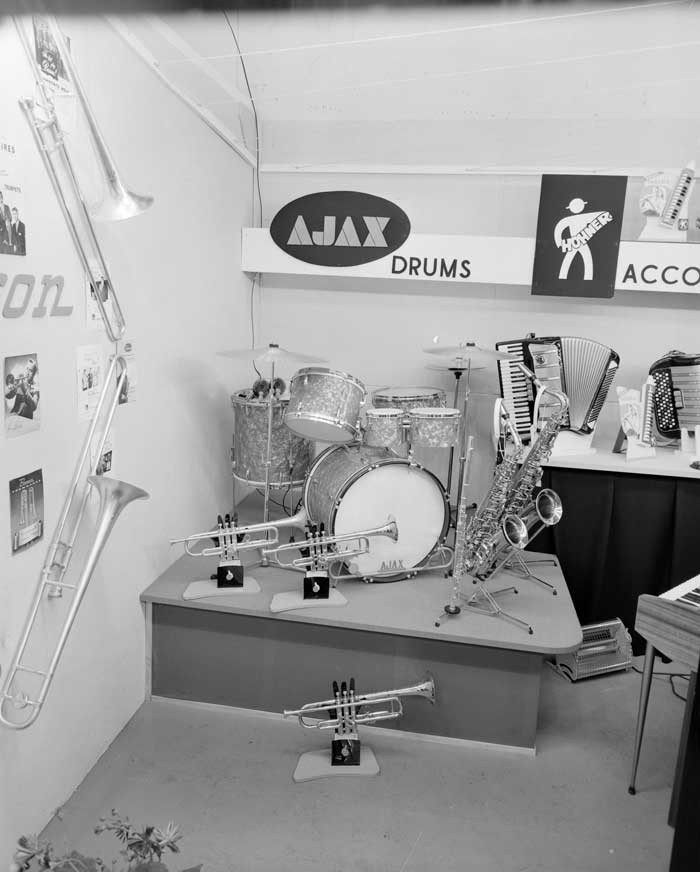 After the death of Eric Begg in 1948 the management of Begg’s passed out of the Begg family, but the company continued to expand. At the time of its 90th birthday in October 1951 it employed 800 staff, many of whom had worked for the company for decades. The longest serving staff member was Jimmie Himburg who began work at the Timaru branch in 1891 when he was 11 and was still working in the Dunedin shop when he died 67 years later. 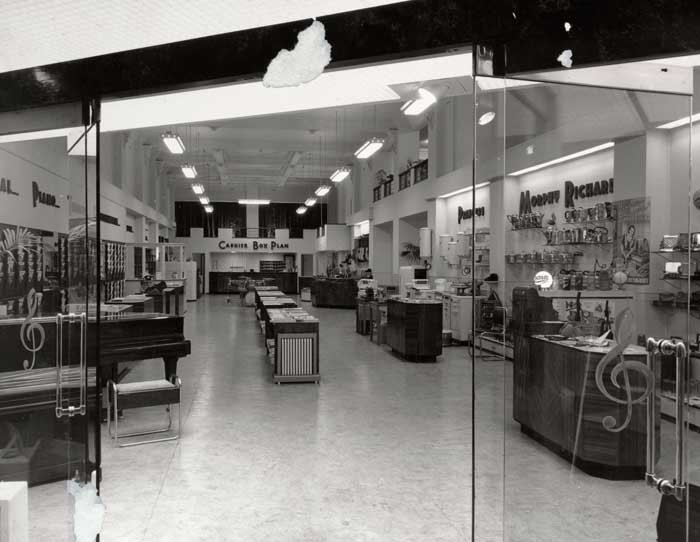 Begg’s employed countless musicians over the years, among them Kiri Te Kanawa as a schoolgirl, who performed at staff Christmas parties. Others include the long-serving Dunedin branch manager, xylophonist Walter Sinton, Auckland jazz trumpeter Jim Warren, and the Wellington identities Bob Barcham and Vern Clare.

One of the more colourful was the Wellington band leader and saxophonist Don Richardson, a member of the Kiwi Concert Party in the late 1940s. 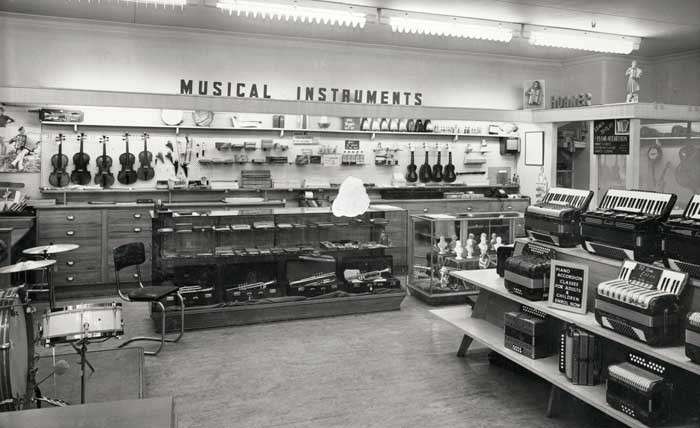 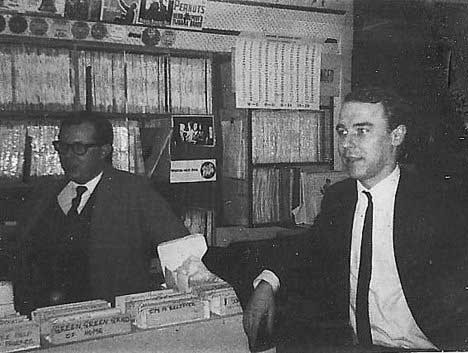 Inside Begg's record bar, Auckland, in the mid-1960s. On the right is Australian film director and screenwriter David Stephens. - Kevin Hall collection

With the advent of television in the 1960s, Begg’s began assembling television sets at the factory in Otahuhu and business boomed. This led to a flurry of expansion until there were 33 branches across the country and the head office moved from Dunedin to Auckland. However, the approach of management had changed significantly and, intent on expanding further, the board invested in a number of ill-fated ventures. The final mistake was Begg’s purchase of the Wiseman sports shops.

Much to the horror of the old Begg’s brigade, the emphasis had now moved completely away from music. In 1970 the board decided to sell off the shops individually, thus closing down the biggest and most widely known music business in New Zealand. But Begg’s – “the Musical and Electrical Centre” – will always be an important part of New Zealand’s music history. 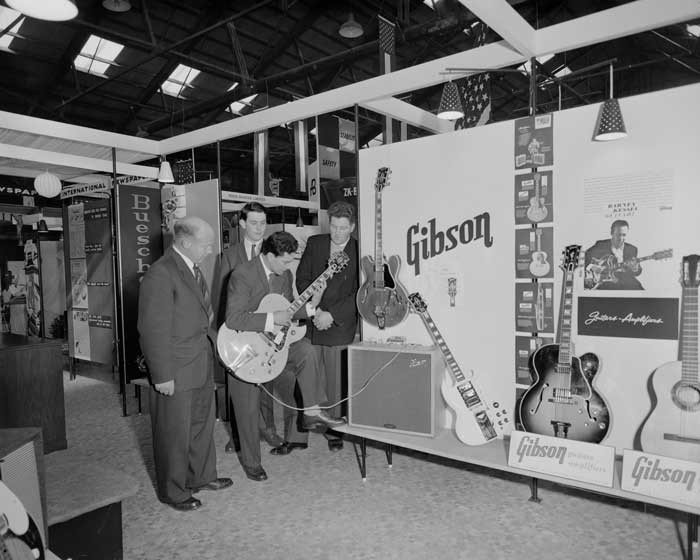 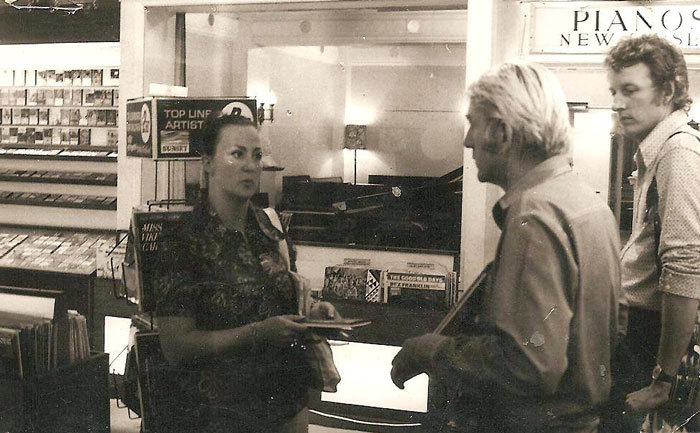 Lorayne Tennet and Rod McKuen in Begg's Auckland branch in the late 1960s. Rod is signing his book for Lorayne. - Lorayne Tennet collection 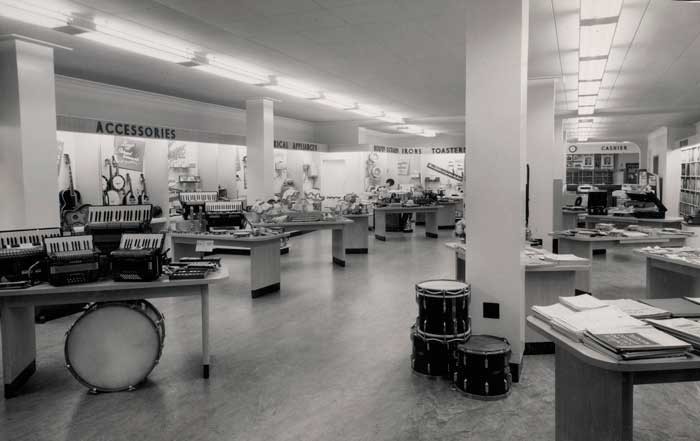 Clare Gleeson is the great-great-granddaughter of Charles Begg, the firm’s founder. She is the author of Meet Me at Begg’s: the Story of Charles Begg & Co, Music and Appliance Manufacturers and Retailers, 1861-1970 (Ngaio Press, Wellington, 2012).

Unless otherwise stated, all images are from the collection of Clare Gleeson.