f t
After leaving Sydney at the height of their success, The Cleves arrived in London renamed Bitch, with a pile of new songs written on their ocean voyage to reflect their new, rockier direction.

With no plans or contacts it became apparent that Bitch – with the line-up now comprising Ron Brown (guitar, vocals), Gaye Brown (keyboards, vocals), Rob Aickin (bass, vocals) and Ace Follington (drums) – would more likely than not starve to death within a few months of arriving in London if they waited for people to come to them. The group funded a gig at London's Speakeasy Club and invited representatives from most of the major record companies.

Bitch hired the biggest PA system they could find and set out to  blow the roof off the Speakeasy. This paid instant dividends when several labels started bidding for them before they had even finished their set. In the end Warner Bros. made the best offer and quickly signed them to a NZ$50,000 contract.

Warners sent them to Spring Cottage in East Sussex with instructions to take their time, write more material for an album, and – just as importantly – to write a hit record. “I would quite often play short guitar riffs between songs during our sets, recalls Ron Brown. "The riff for ‘Good Time Coming’ started as one of those live riffs, with Rob Aickin supplying the music and words.”

The single ‘Good Time Coming’ and tracks for the album were recorded at Morgan Studios in London with Carly Simon's guitarist and song collaborator, Jim Ryan, in the producer’s chair.

‘Good Time Coming’ was a regional Top 10 hit in Germany and Holland and spawned a cover version from UK EMI band Mustard the following year (1974).

Two decades later, in 2008, UK group Unkle (with Josh Homme) sampled the guitar riff from ‘Good Time Coming’ for their track 'Restless’. This has since been used on several TV shows including Top Gear, Misfits and CSI New York. It's also featured on the soundtracks of numerous video games.

With the album in the can and the relative success of the first single, the group was booked into George Martin's famous AIR Studios in Central London to record the follow-up single ‘Wildcat’, with Tony Ashton (of Ashton Gardner & Dyke) producing. Gaye recalls the sessions, “Tony Ashton had a bit of a budget so he brought in Madeline Bell and Doris Troy to sing backing vocals, I was sitting on a stool and nearly fell off when they started singing – just sheer power.”

After the album’s recording, Bitch did what they did best and hit the club scene with abandon, and as in Australia, soon endeared themselves to fans and journalists alike.

“Bitch played the Global Village on Saturday night and their set rocked and rolled and came over with all the high power velocity that should make them teen idols within a few months.” (Melody Maker 18/8/73)

“The Speakeasy was booming on Saturday night with all the young dudes down from the Rolling Stones gig. The place was jiving. Hot and sweaty – a perfect atmosphere for hard-driving rock from Bitch. It's quite a switch watching this fresh punky rock band after seeing the grand old men of Rock 'n' Roll. But Bitch got it on.” (NME 21/9/73)

“Bitch came on in front of an uncomfortable and restless audience and soon had the place rockin’ to its foundations.” Mark Drennan (Scream & Heard )

Bill Harman, the group’s manager at the time, reflects on the fortunes of The Bitch album.

“The band were signed to the Warners arm of WEA records, an English amalgamation of US labels Warner Bros., Elektra and Atlantic. The album had been mastered and was complete, including artwork, when disaster struck.

“In the early 1970s, the UK was the world’s most prolific market for new bands and the most likely place to discover potentially top-selling artists. When the A&R department of WEA found a new talent they would, in consultation with the parent companies, sign them to one of their three labels.

“Around the middle of 1973, when the Bitch album was all ready to go, the bosses of each of the three labels in the US became worried that the next Led Zeppelin would walk through the doors in the London office and promptly get signed to one of the other two labels. Consequently, they agreed to wind up WEA and proceed to operate as three separate labels in the UK. Former CBS UK boss Robbie Robinson, an accountant by trade, was put in as caretaker at Warners until a proper MD could be found. Robinson, singularly lacking in imagination, was not prepared to action anything that involved company expenditure. This included distributing the Bitch album. Things dragged on for months and culminated in the Bitch recording deal being scrapped and the album ditched.”

Although a bitter blow, the group carried on briefly before breaking up. The former British head of WEA, Ian Ralfini, set up Anchor Records and signed Gaye Brown as a solo singer.

Gaye released one single for the label ‘Let A Little Love Come In’/‘Minstrel Song’ before returning home to marry Bitch manager Bill Harman. Gaye never returned to the UK to fulfill her contract with Anchor, where she was to be the voice for the songwriting of Phillip Goodhand-Tait.

Album demos were recorded but it soon became a Harrison solo album. One of Ron and Rob's songs was included on the subsequent release.

Ron and Rob pursued their songwriting careers and recorded demos at Island Records under the guidance of legendary UK producer Muff Winwood.

Ron stayed in the UK for 30 years before returning home in 2008. Rob Aickin returned home in 1977 and became the in-house producer at Stebbing Recording Centre in Auckland where he went on to produce local landmark albums including releases from Hello Sailor, Th' Dudes and Golden Harvest.

The CD The Musical Adventures of The Clevedonaires, The Cleves and Bitch, featuring tracks from the unreleased Bitch album was released in April 2013.

Record Store Day, April 2015, saw the complete album, plus Cleves and Clevedonaires tracks, released on double vinyl, under the same title as the 2013 collection. 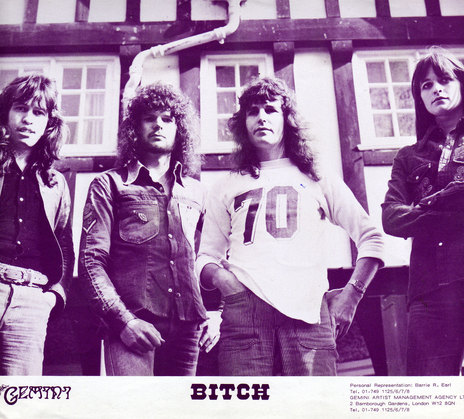 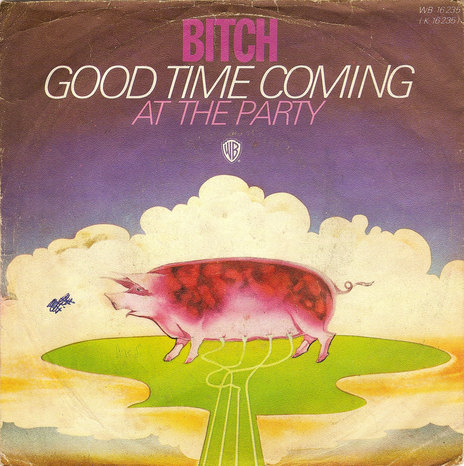 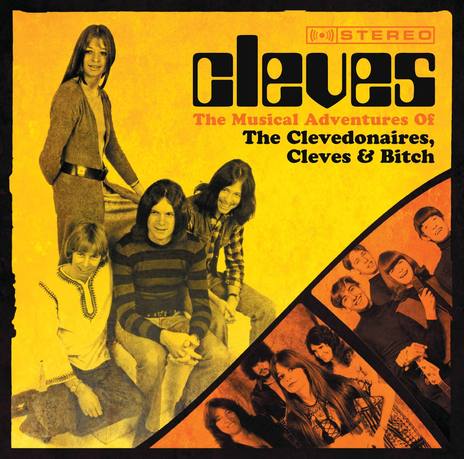 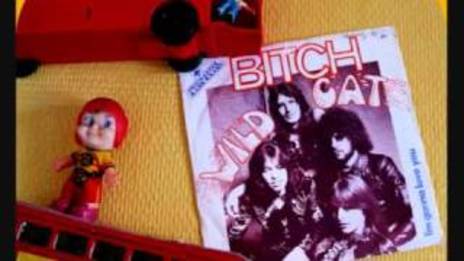 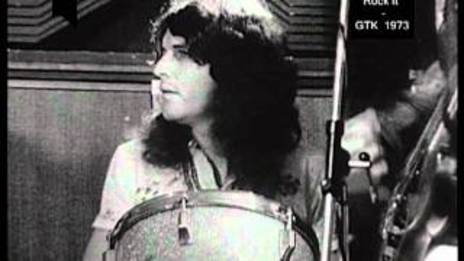 Rock It - from GTK 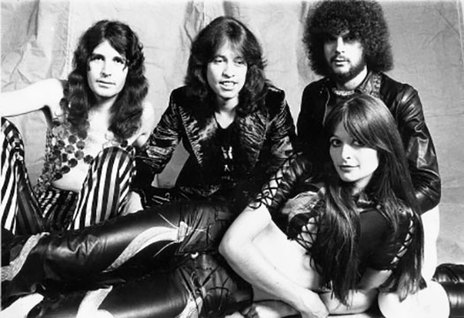 Bitch in the UK around 1971: Ace Follington, Ron Brown, Rob Aickin with Gaye Brown in the front. 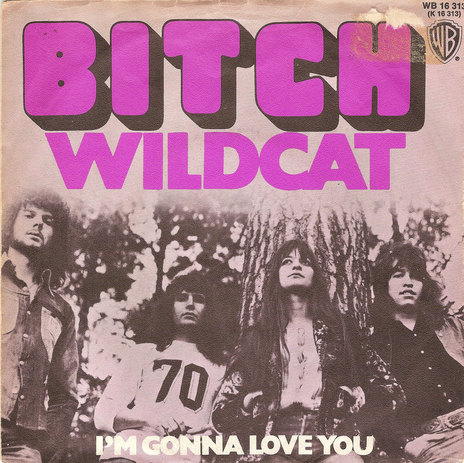 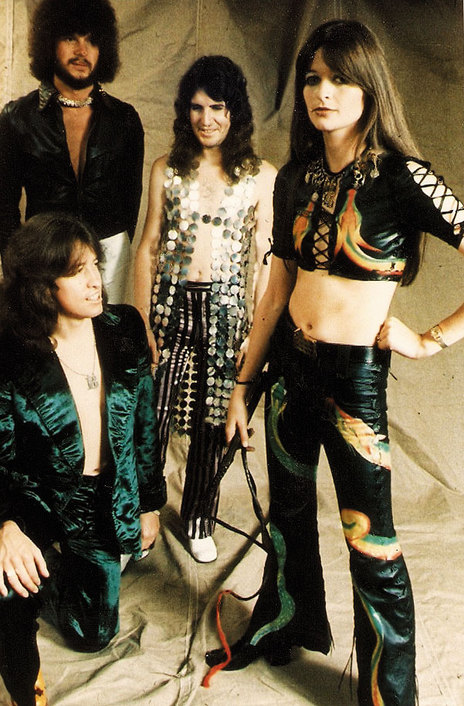 Their booking agent only had a small handful of acts including The Rolling Stones. Gaye Brown was in the office on one occasion and answered the phone. It was Lord Something or other and he wanted to book the Stones for his daughter’s 21st. Gaye told him to hold while she checked, shuffled some paper around and came back and told him, “I’m sorry but the Stones are booked but we have another group who are just as good called Bitch – would you like to book them?” “Yes,” came the reply.