The Wellington music scene of the early 1980s was volatile, as the long, fuzzy hangover from 1970s punk morphed into the bleak, elegiac pop of bands like Beat Rhythm Fashion. Clubs kept closing and the Specials’ ‘Ghost Town’ was the song du jour.

The year 1982 was arguably the low point. For many, the wounds from the divisive Springbok Tour were still fresh: Rob Muldoon was back as leader, and the economy was mired in a wage/price freeze.

Violence flared at gigs between opponents and supporters of boot boy band Knives of West Eleven, a barely remembered Swastika-wearing crowd from the hilly, wind-bashed suburb of Newlands. 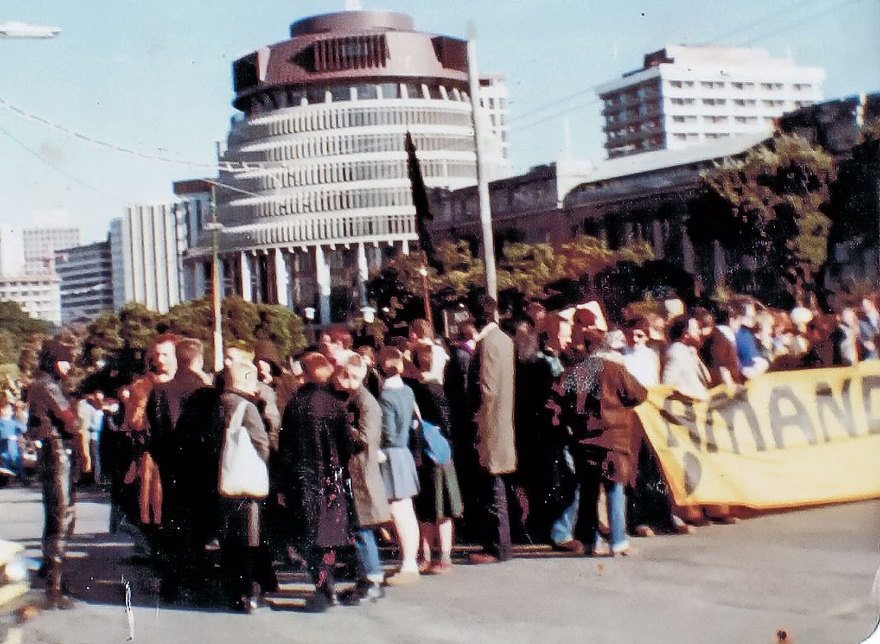 Anti-Springbok tour rally, 1981 - Void is on the left in a brown coat - Void Ossuary

Massey sociologist Paul Spoonley, quick to place this phenomenon under the scholarly microscope, said the band “espoused fascist arguments, if somewhat unsophisticated and incomplete in form.”

A band with the slightly whiffy name of Riot 111 would better exemplify the polarised, anti-authoritarian and politically charged mood in the capital that year. The band would go on to stage a noisy protest outside TVNZ headquarters after the broadcaster “banned” a video clip of its third single.

Riot first gained attention during the Springbok tour protests of the previous winter with a raw-edged debut single, '1981'.

Always more a gaggle of activists than a musical group, Riot first gained attention during the Springbok tour protests of the previous winter with a raw-edged debut single, '1981'. The lyrics drew on the famous “Ka mate” haka and the “Amandla” (Freedom) chant that became the goose-bump giving chant of the local protest movement.

The ‘1981’ single was rough as guts: in best punk rock style, Riot did its initial recordings on basic, analog equipment. As with many other garage bands of the day, the sound quality was primitive even if the ideas were fiery.

Second single ‘Subversive Radicals’ did better, even reaching No.20 on the local pop charts in January 1982. But again the sound quality was poor, too poor to be played on commercial radio.

‘Subversive Radicals’ really caught Riot’s dark paranoia by 1982: from the garish red and green cover with side-by-side photos of Mussolini and Muldoon, to lyrics like: “My phone is tapped, I’m followed round town … the CIB all know me.”

Quality issues came to a head in June when TVNZ refused to screen the video clip for the follow-up single 'Writing on the wall' on Radio With Pictures. Its lyrics evoked the scary visions of a totalitarian future set out in George Orwell’s iconic novel 1984: “You’re all waiting for 1984, but we all know it’s here.

At a time when television stopped screening before midnight and only one of the three available channels broadcast locally made music videos, this rejection was a major setback. In a letter to the band, Tom Parkinson, TVNZ's head of entertainment, first blamed what he called “the standard of the song and musicianship”. 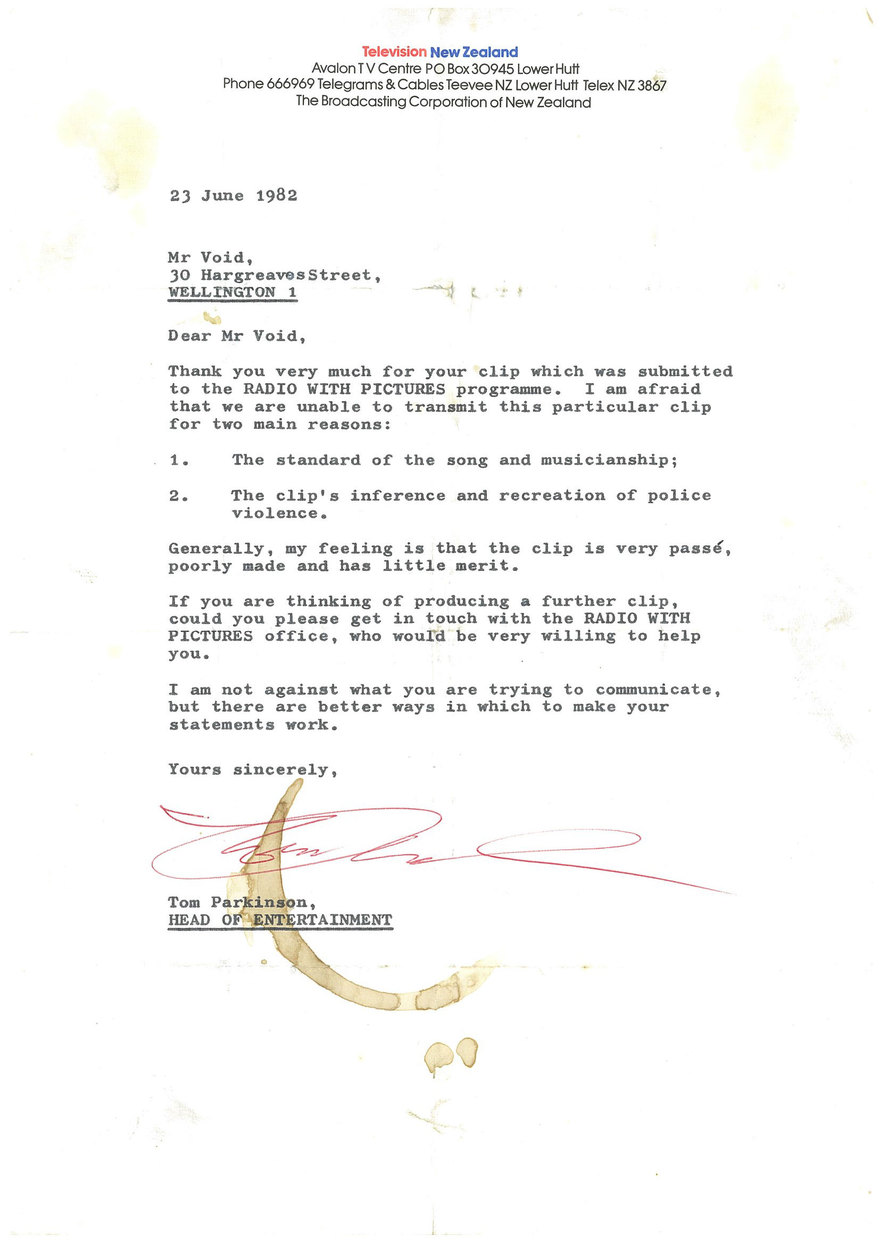 Citing the graphic images of clashes between police and protestors taken during the 1981 tour, Parkinson also took offence at the “inference and recreation of police violence”.

What really annoyed Riot, however, was Parkinson’s observation that “the clip is very passé, poorly made and has little merit … I am not against what you are trying to communicate but there are better ways in which to make your statements work.”

AS THE BAND BLAZED AWAY AT HIGH VOLUME OUT AT THE FRONT, TVNZ STAFF GOOD-NATUREDLY LOBBED TOILET ROLLS FROM UPSTAIRS WINDOWS.

And so on a wintry Thursday afternoon in July, staff out at Avalon studios in the Hutt Valley rushed to the window to see members of Riot playing on the back of a truck, powering their home-grown buzz-saw sound with a generator. At the time, Avalon was still TVNZ headquarters.

As the band blazed away at high volume out at the front, TVNZ staff good-naturedly lobbed toilet rolls from upstairs windows. Shaven-headed supporters painted “Remember Riot 111” in blue across the front lawn and hoisted the “A for Anarchy” banner on the flagpole.

Ignored by TVNZ news, the protest made the front page of Wellington newspaper The Dominion the following morning. Parkinson claimed he would have screened the clip “if the music and sound recording had been of a higher standard.” He offered to help the band make a new clip. 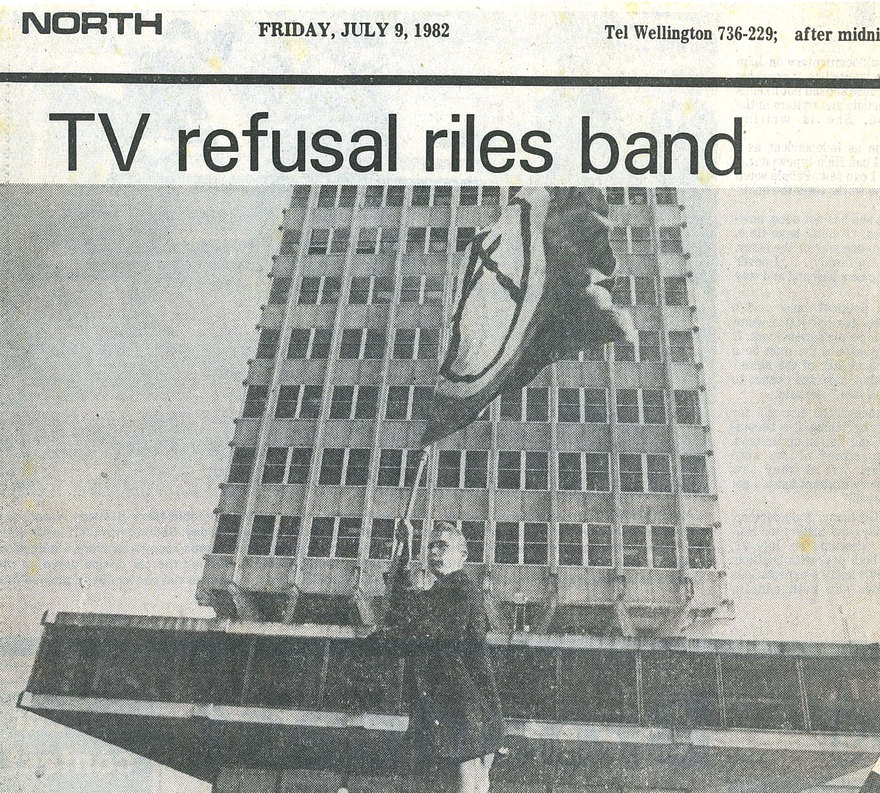 Riot singer Void later pointed out a huge discrepancy in Parkinson’s claims. “First, the track was recorded at Marmalade Studios; the most expensive studio in Wellington at the time. The video clip was shot and edited completely by Radio With Pictures staff member from Tom Parkinson's Department. It was their decision to include pictures of police violence.”

The general mood of disillusionment that year was about to worsen. On November 18, Neil Roberts, a 22-year-old anarchist tragically blew himself up in a bomb attack on the Whanganui Computer Centre. At the time it held the so-called National Law Enforcement Data Base, seen as an impenetrable, Orwellian institution of the worst kind.

On the day he died, Roberts famously spray-painted a slogan that would come to symbolize the year and the times: “We have maintained a silence closely resembling stupidity.” The Evening Post, describing Roberts as a “Kamikaze Punk”, reported he’d told his friends: “I’m off to Wanganui to do something frightful. If I should blow up the Wanganui Computer, the cops will be around.”

Riot then fell off the radar, though Sydney-based Void keeps a proprietorial interest in anything written about the band. Ironically, the feared Orwellian year, 1984, would bring relief for many as Muldoon was voted out. Or would it? At this point, the anarchists would most likely mutter their old maxim: “Either way, the government gets in.”