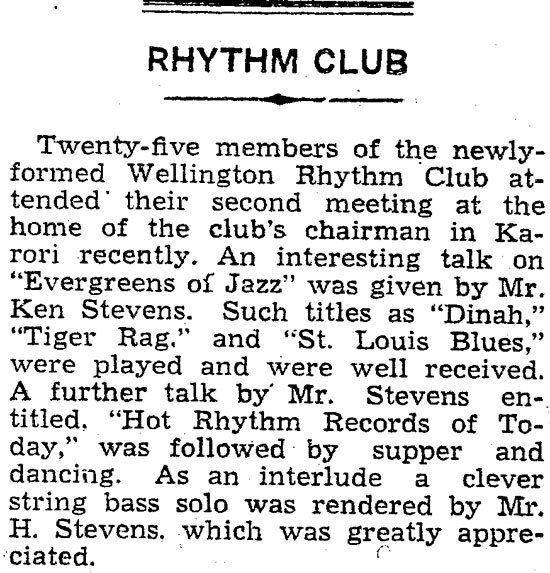 In the early 1930s jazz fell out of favour somewhat as the popular music, although as Arthur Pearce stated in New Zealand Radio Record and Electric Home Journal in 1932, New Zealanders continued to “like a bit of ginger” in their music. While the first half of the decade was a fairly fallow period for jazz, the latter part of the 1930s saw the rise of swing and a resurgence of jazz as popular music. The resurgence and related fan activities were assisted by jazz being more seriously included on New Zealand radio.

The latter part of the 1930s saw the rise of swing and a resurgence of jazz as popular music.

By the early 1930s most of the formally organised jazz clubs and activities of the 1920s had ceased and jazz fans had to organise activities on an individual basis. Most of the activities seem to have fallen below the radar. There were occasional reports in newspapers about someone holding a jazz (or as jazz was becoming known, “modern dance music”) record recital, or a cabaret or dance hall having a “jazz night”, but it seems that most jazz fan activities went unadvertised and were organised privately by the fans. However, the arrival of swing in New Zealand in 1936 prompted the return of jazz clubs and in the late 1930s a new style of jazz club, dubbed “rhythm” or “swing” clubs, began to emerge. As in the 1920s, these organisations supported the existing scene, and through their activities, encouraged the expansion of each of their local (centred around particular towns) scenes.

Swing and rhythm clubs were a response to both the new swing style and to the overseas fan organisations that New Zealand fans observed through the music and popular press, local and overseas radio, and films. These clubs were founded by early swing fans, who wanted to share their passion with fellow swing fans and anyone else that might be interested. The function and purpose of these clubs was to popularise swing, both music and dance, in their local community. 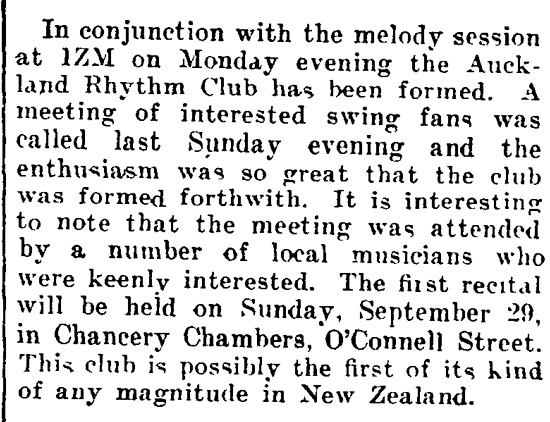 These clubs were split across the activities of dancing and listening. The dancing clubs were known as swing clubs and the listening clubs were rhythm clubs. This use of swing to denote dancing clubs only occurred in the late 1930s and early 1940s. By the end of World War II the term “swing club” denoted a listening club. The swing (dancing) club activities differed slightly from their 1920s predecessors in that they did not always hire bands, but often used records for their dances. Some, such as the Wellington Swing Club (founded 1939), used both a live band and records. In the case of the Wellington Swing Club the band was one that was formed for the purpose of the swing club dances. 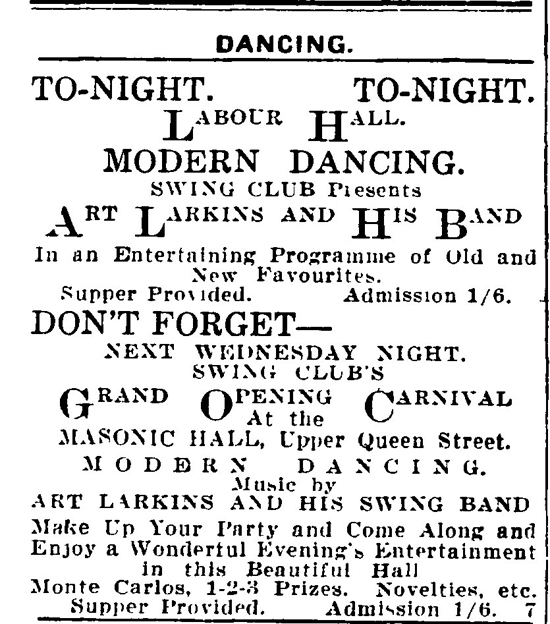 While the Wellington Swing Club was swing dance focused, their activities were not solely dances. Press reports indicate that at some of their members–only evenings they developed new steps and techniques, and listened to and discussed swing records. At one evening, their band's drummer, Cav Nichol (who later became the host of a jazz programme on Wellington’s 2YD radio station), gave a lecture on the "Evolution of Swing" with 17 recorded examples of development, from "ragtime–jazz–Schmultz–swing". The equal inclusion of the listening and knowledge aspects of jazz fandom had, up until this point, been the preserve of the rhythm clubs.

In 1936 and 1937 several prominent rhythm clubs were established in the main towns in New Zealand.

In 1936 and 1937 several prominent rhythm clubs were established in the main towns in New Zealand. These clubs were a radical departure from the jazz fan clubs that focused more on the dance form than the music. These clubs were established so that fans could listen to and discuss the music, and can be seen as initiating the formation of jazz culture in New Zealand. The meetings for these clubs were usually a combination of the playing of the latest records, live music provided by members or invited guests, and lectures and discussions about various aspects of the music and the culture surrounding it.

As a result of this focus, the rhythm clubs attracted a different type of jazz fan. These were fans who, although they appreciated that swing and 1920s jazz were primarily dancing music, did not want to dance to it. These fans wanted to hear the extended improvisations that played with the rhythm, taking it out of dancing tempo/rhythm (embracing wider tempos and rhythmic shifts), and wanted to hear the musicians playing with different aspects of the music. The membership of these clubs included many jazz musicians, ranging from amateur to professional, as well as non-musician fans, who were often avid record collectors. 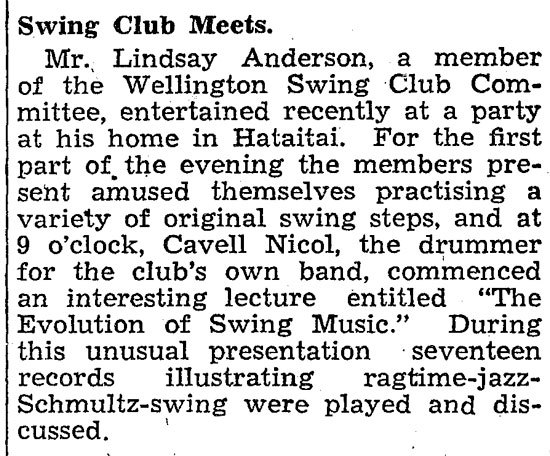 The activities of the rhythm clubs, as they focused on the act of listening, were naturally different in space and form to the swing clubs. Meetings took place at a variety of venues, from the houses of members to community halls and commercial venues (including music stores), and were held at varying frequencies. Meetings were usually held on Sunday evenings and lasted around two hours. The exception to this was when a jam session was included at the end of the meeting, which would then extend until the musicians decided to finish for the night.

Another aspect of jazz fandom that arose in the 1930s was the dedicated jazz radio programme. Until the 1930s jazz on New Zealand radio was mostly ad hoc: primarily from cabaret and dance hall relays and the occasional jazz record “for dancing”. In 1935 that changed when Arthur Pearce, by now a very well known jazz fan who regularly contributed to publications such as New Zealand Radio Record and Electric Home Journal and frequently spoke at informal jazz fan gatherings, was invited to present a lecture-recital on jazz on Wellington radio. Pearce chose to focus on Duke Ellington’s music. He hoped to attract new jazz fans and to shake some of the listeners’ complacency. According to Pearce’s biographer Laurie Lewis this lecture managed to create “a small furore” with a number of letters to the editor of various publications creating an intense debate about whether this music should be broadcast, and whether it was music at all. Although the presentation of jazz polarised the audience, the programming heads (and some of the audience) were impressed by the knowledge and presentation by Pearce, and it does seem to have increased the jazz listening audience in New Zealand. 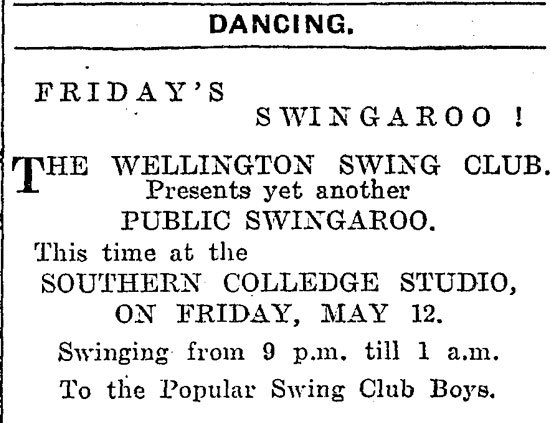 This initial venture into broadcasting had a long-term effect on Pearce and jazz fans in New Zealand.

This initial venture into broadcasting had a long-term effect on Pearce and jazz fans in New Zealand. In 1937 Pearce was approached by James Skeddon of Wellington’s 2YA to host the Friday night modern dance music slot. Pearce agreed and in July 1937 he began hosting the one-hour programme. With the connivance of his friend and fellow jazz fan Bob Bothamley, who was now working at 2YA in the Dance Music department, Pearce, known on air as “Turntable”, began to slowly shift the tone of the programme from general dance music to jazz. Pearce was already well known among New Zealand jazz fans as having encyclopaedic knowledge of jazz, and he applied this knowledge in the selection and presentation of recordings on his show. By the end of the decade the programme was entirely jazz, and it was the programme to listen to if you were a jazz fan or musician in New Zealand, and Rhythm on Record also became staple listening for fans and musicians across the Asia-Pacific region (including fans in the United States). 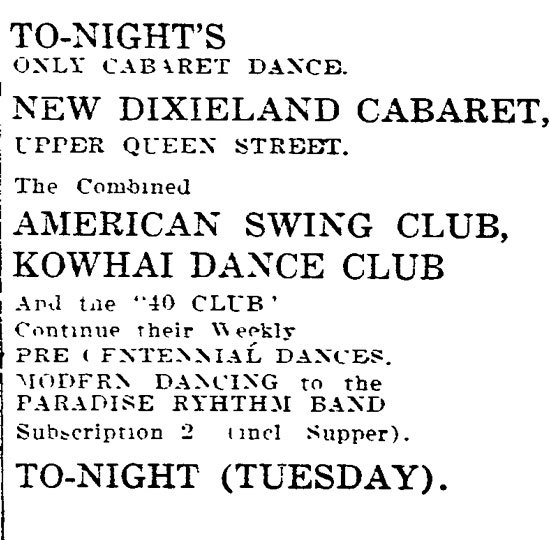 The later 1930s were a period of resurgence for jazz in the form of swing. For fans of jazz in the 1930s seemingly little had changed in the way they appreciated jazz from the 1920s, though of course the music was now very different. In New Zealand there was little of the rivalry between the “hot jazz” and “swing” fans as seen overseas. While the hot jazz of the 1920s was seen as passé, many of the local musicians were still playing both styles, and fans appeared to embrace the musician as much as the music. The start of World War II in September 1939 would eventually curtail the jazz scene and organised fan activities in New Zealand, but as with the early 1930s, it would not be for long.

Thanks to National Library Of New Zealand. Papers Past.