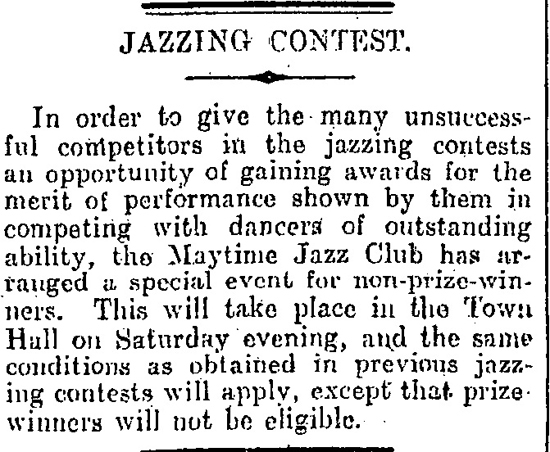 The dictionary definition of what a fan is barely scrapes the surface about what all of us feel for our favourite pastimes, and in the case of this website, our favourite musical artists. As fans we play a crucial role in the vitality of the music industry, however, the activities (or the importance) of fans, and fan clubs have rarely been discussed in music histories. Without fans where would our favourite bands be? How would the music industry flourish without us? 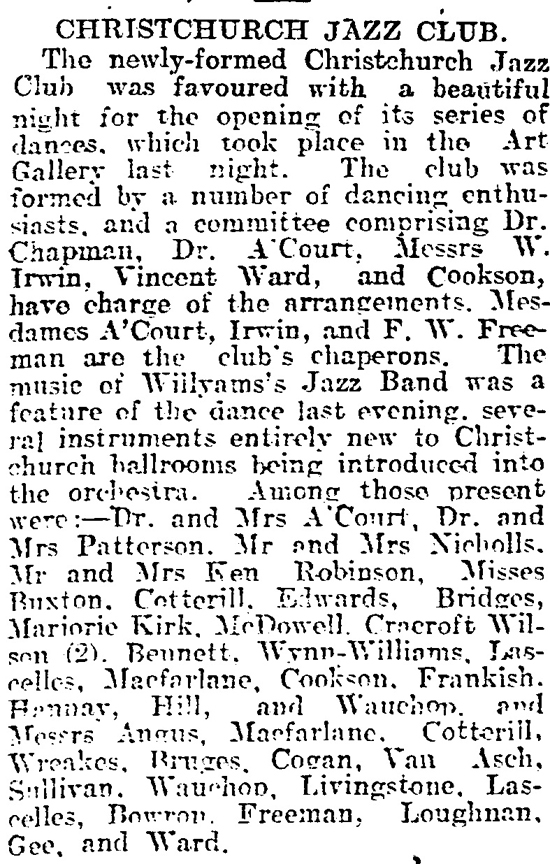 While there is no doubt that there were vocal fans of various music genres in the 19th Century the concept of a fan club appears to have developed in the early years of the 20th Century. However, it was not until about 1920 and the beginnings of jazz that music fan clubs became noticed by the media in New Zealand, and their activities began to be included in social, entertainment and women’s columns. 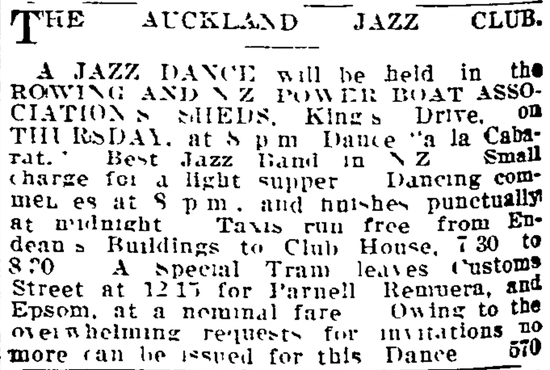 The 1920s was a decade of great technological innovation for music.

It is important to note that the 1920s was a decade of great technological innovation for music. The gramophone, records and radio became increasingly accessible, affordable and popular. It was also the decade in which the film industry made great strides towards the use of sound in films. These innovations made it possible to enjoy music in very different ways, and this changed the way that people used music in their lives.

Perhaps one of the first socially active music fan clubs in New Zealand was the Christchurch Jazz Club, formed in April 1920. The main aim of the club was to promote jazz dancing and music (with the focus primarily on dancing – which, it should be noted, was both a specific dance and a style of dancing). Because of this aim they also (whether consciously or as a by-product) promoted local jazz bands through their dances, and the Christchurch Jazz Club became something of a training ground for emerging jazz musicians in Canterbury. The Christchurch Jazz Club also had philanthropic goals, with many of the profits from their activities going to various charities in and around Christchurch. 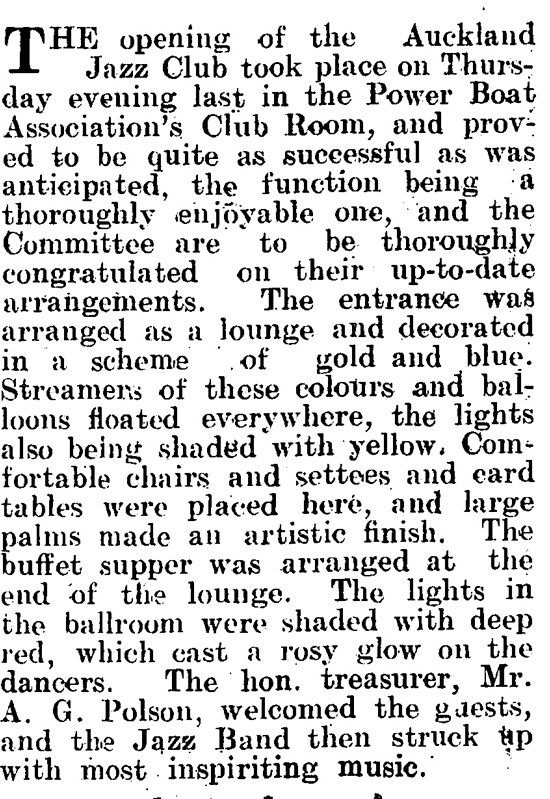 The Christchurch Jazz Club also established the first jazz venue in New Zealand, the Winter Garden. The Winter Garden was opened on September 2 1921, in Armargh Street in central Christchurch, and was not originally a commercial venue. It did not have regular public opening hours initially, and outside of the club's dances it catered mostly to private functions. This changed in 1922 and the venue was opened for public dancing two or three nights a week. The hottest local bands performed, including bands led by Havelock Willyams, Miss MacDonald, and Louis Bloy, and later in the 1920s, Bill Bailey and Les Marston. 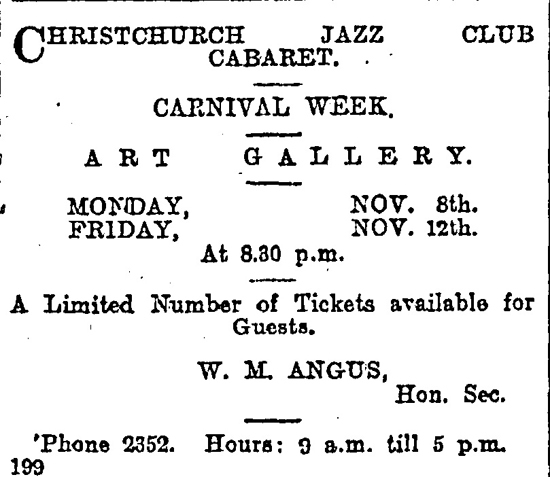 The Winter Garden may have been the home of the Christchurch Jazz Club, but it also quickly became the hub for all jazz and jazzing (jazz dancing as it was then known) activities in Christchurch during the early and mid-1920s. It soon became the hottest nightspot in town, and was the place to go if you were part of the fashionable crowd or a serious jazz fan. 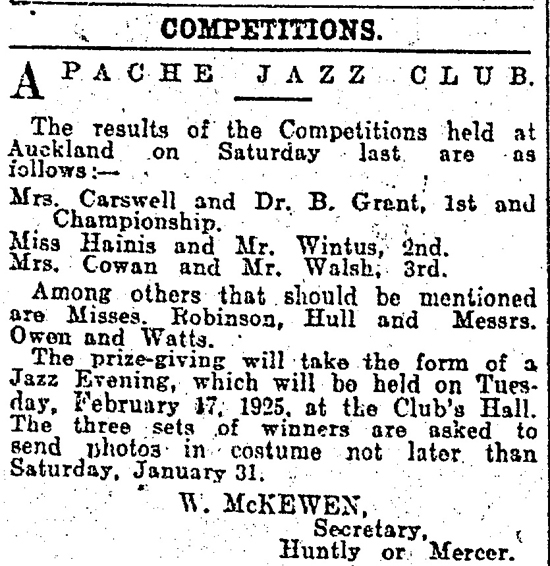 Unfortunately the club dissolved in 1926, and the Winter Garden was sold off, though it was not the end of the venue; it reopened in early 1927 as a commercial cabaret. The dissolution of the Christchurch Jazz Club did not mean the end of organised jazz activities for Christchurch. By 1926 jazz had been well established as the latest popular music and dance, and there were a number of different venues (including the Winter Garden) for jazz around the town. 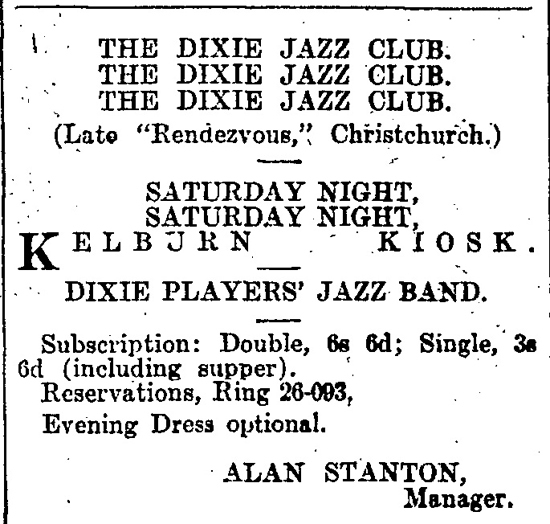 The Christchurch Jazz Club might have been the most self-contained jazz club in New Zealand during the 1920s, but it was certainly not the only one. Many clubs (in the loosest sense of the word) were formed by, or around, dance studios. Looking through the newspapers of the time there are reports of jazz dances held by clubs such as the Parisian Jazz Club at the Parisian Dancing Studio. This seems to have been a common practice by the managers of dancing schools — have a jazz club, or run social jazz dances to increase the audience for jazz, and increase the clientele for the studio as people attempted to learn how to dance jazz. 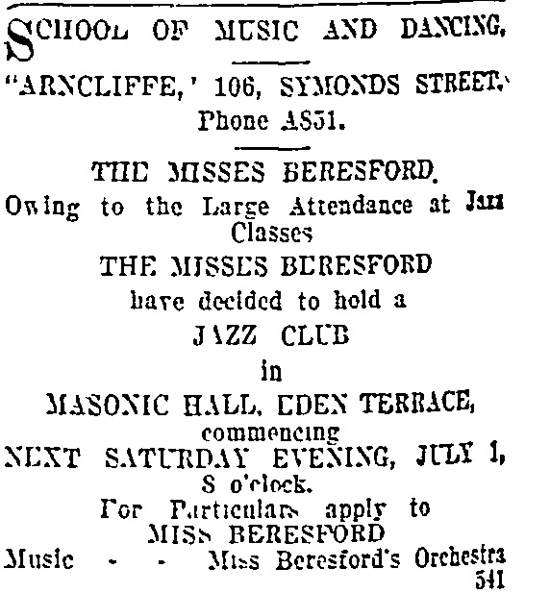 Jazz evenings, jazz teas, record recitals, and dances were organised by individuals and groups of fans, as well as managers of cabarets, dance halls, music stores, and cafés around New Zealand. These were places to dance and listen to this wonderful music, where a fan could meet other like-minded people, and perhaps form their own fan group; where one could share records or information about jazz heard on the radio (here or overseas). It was activities such as these, as well as the continued dominance of jazz in the dance halls and cabarets (helped along in the mid-1920s by the arrival of the Charleston and the Black Bottom), that kept jazz at the forefront of popular music and dance across New Zealand. 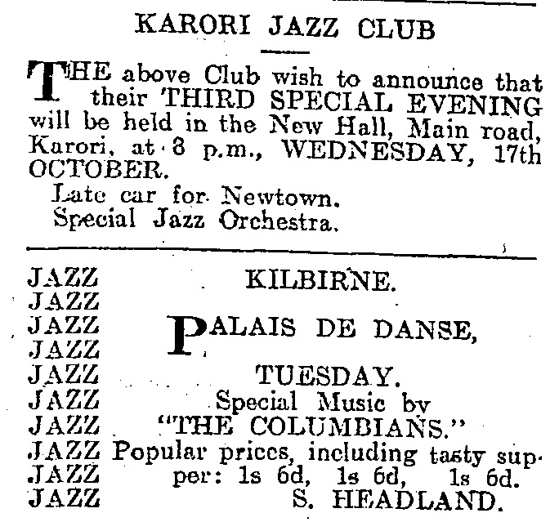 Most of the activities mentioned so far had a significant dancing component (even the record recitals), and not all jazz fans in the 1920s wanted to focus their activities around dancing. One of these fans – which one might call a proto-typical modern jazz fan – was Arthur Pearce, who would later become known to New Zealand jazz fans as ”Turntable”, the evangelist of jazz on New Zealand radio and host of Rhythm on Record. 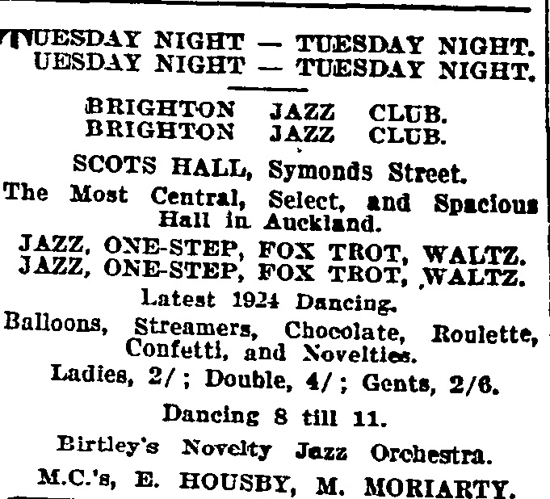 By the late 1920s, Pearce was a fully-fledged jazz fan with a burgeoning jazz record collection.

Pearce first heard jazz in a dance class around 1922, when the teacher played a record by the Original Dixieland Jazz Band. In the Laurie Lewis-penned biography Arthur and the Nights at the Turntable: The Life and Times of a Jazz Broadcaster, Lewis states that Pearce was “drawn to the new sounds” but he was unable to find any other records in the jazz style at that time. This was because there was a limited number and range of jazz records being imported into New Zealand in the early 1920s. The serious jazz fan had to import records themselves to achieve breadth and depth in their collection. 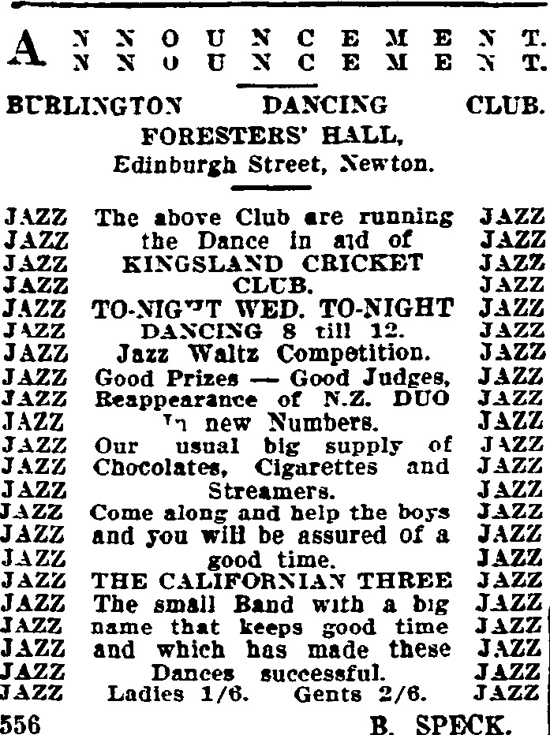 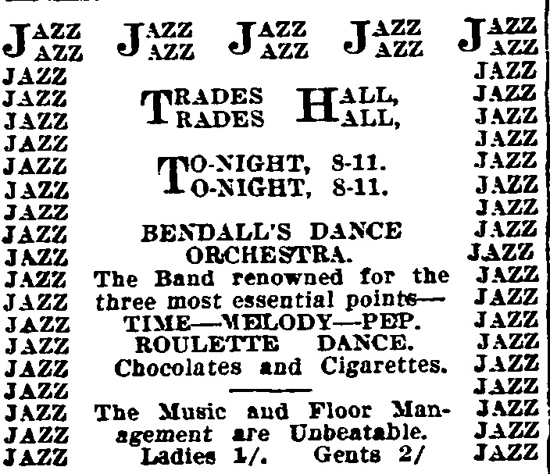 By the late 1920s, Pearce was a fully-fledged jazz fan with a burgeoning jazz record collection, who was trying to find other fans to share his enthusiasm for listening to jazz. One of the first groups he encountered was comprised of Wellington’s dance band musicians trying to learn the new style who met at “Macs” on Manners Street after closing on Friday nights. To Pearce’s disappointment, while the records were very good (imports of Duke Ellington, Cab Calloway, Louis Armstrong and so on), the musicians wanted to play along with the records to learn the style, rather than listen intently, as Pearce wanted to do. 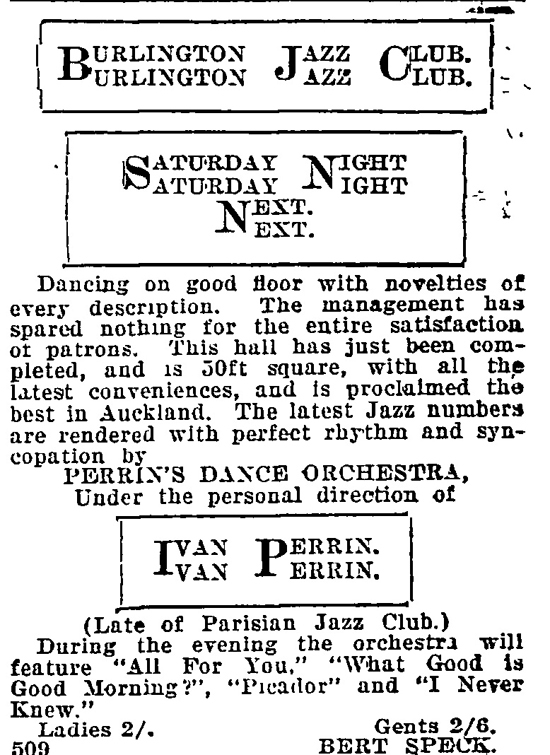 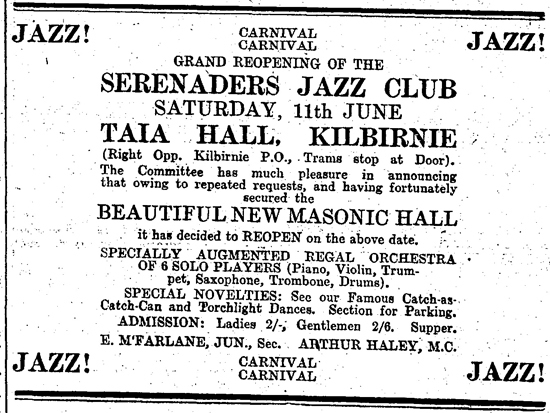 Arthur Pearce was a very different kind of jazz fan from most in 1920s New Zealand. The main focus of his listening activities was to learn as much as he could about the music, and about the specifics of each recording, and to share that information with other fans. Pearce did eventually find kindred spirits who wanted to listen and learn about the music, including Bob Bothamley, who would later become instrumental in Pearce’s radio career, and the championing of jazz on New Zealand radio.

The activities detailed here are just a small example of the ways that people enjoyed jazz in New Zealand during the 1920s. For casual fans and the ‘average’ audience member, jazz was a fashionable product and lifestyle, and there were many other ways of enjoying jazz than being an inveterate dancer or obsessive listener. For the obsessive jazz fan in the 1920s the world spun on a twin course of music and dance, to the point that it is almost impossible to speak of one aspect without the other. 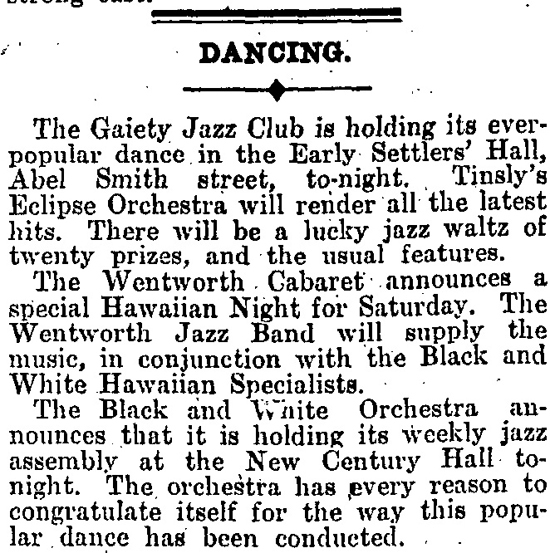 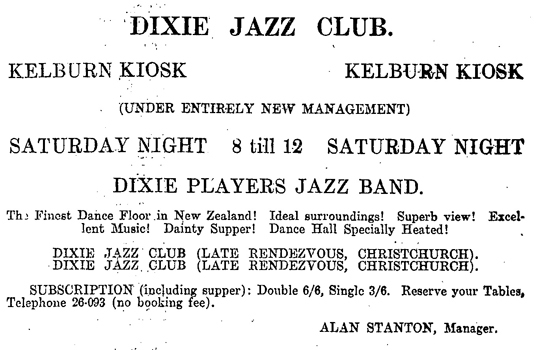