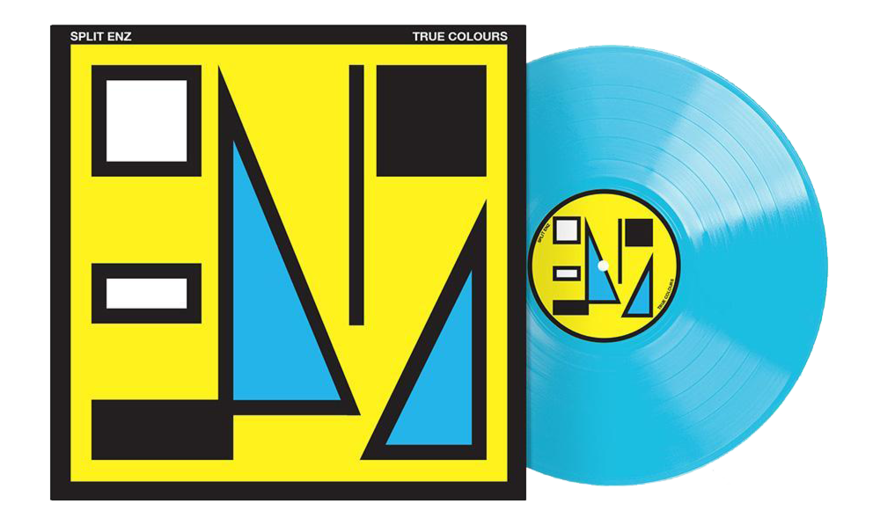 Perhaps the most surprising facet of Split Enz’ 1980 album True Colours is the way it manages to incorporate several major diversions from the norm. One of these is Tim Finn’s lush ballad ‘I Hope I Never’, which sounded like something Roy Orbison or perhaps Whitney Houston could have taken and turned into a real monster. On the other hand, Enz fans were already aware of Tim’s penchant for ballads via that other sad anthem, ‘Charlie’.

Another odd deviation was the two instrumental tracks, ‘Double Happy’ (composed by Eddie Rayner) and ‘The Choral Sea’ (worked up by the ensemble cast). Normally, instrumentals on a pop album would have either been viewed as indulgent or an indication that the group was short of actual songs, but somehow they worked beautifully.

Both of them were great excuses for Rayner to go hog-crazy on his synths. In fact, his keyboards are absolutely crucial to the album and the various textures and motifs he conjures up throughout make up for the absence of a guitar god in the Enz.

Because Eddie Rayner’s contributions to True Colours were so spectacular, and because he remastered (2006) and remixed (2020) the album, I sought Eddie out to answer some pressing questions.

I wasn’t so conscious of it at the time but listening to True Colours now it’s clear that it would have been unthinkable without your contributions. In fact, it’s one of the Enz albums where your keyboard work is quite dominant. Do you remember how that came to be? Was it something that David Tickle encouraged or did you just naturally take command?

The preceding five years of writing, rehearsing, gigging and generally learning my craft as a keyboard player/arranger hadn’t been for nothing. I felt with the recording of True Colours that I had finally found my feet and with the resulting confidence, along with producer David Tickle who I “clicked” with, and who was encouraging of my experimentations on synthesisers – which were only just starting to become seriously “playable” instruments – I was able to let loose! 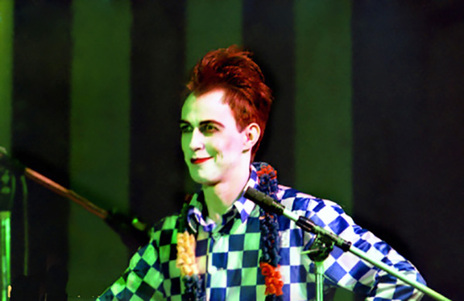 You’re a real “one man band” in a sense and there’s a lot going on both texturally and compositionally from a keyboard point of view on True Colours. Was that something that was hard to replicate onstage at the time?

As the keyboardist in the band I’d accepted that my role was always going to be one of replicating the sounds on our recordings as closely as possible on stage. There were always several keyboard parts going on, often simultaneously. Prior to 1980 there weren’t computers to take the load off on stage (thank the Lord!), so I had to learn the art of splitting my brain, hands and fingers into as many parts as required to perform the parts “live” convincingly … and look sexy at the same time! But I got the keyboard parts mostly right.

The sound of your keyboards is very, very different to the early Enz records. Had you substantially renovated your rig prior to that album and can you remember what kind of gear you were using at the time?

The end of the 1970s saw a huge rise in the development of synthesisers, and in making traditional instruments like pianos and organs more transportable and able to be amplified well. In the early days Split Enz always used to need an acoustic piano at every gig, which was a pain for us (amplification without feedback was always an issue) and promoters alike, but with the advent of Yamaha’s CP-70, that all changed. Synthesisers had also become polyphonic and memory space to store your own sounds was also a new development. The “space capsule”, as the guys called it, was seven or eight different keyboards, including a CP-80 Yamaha (full 88-note piano), a CS-80 and Prophet 5 (both early polysynths), a CP-30 electric piano, a Mellotron for “real” string and choir sounds, a string synth, and a monophonic synth such as an EML 500 or Cat Octave … Oh, and I bought the first Korg Vocoder to arrive in New Zealand, which was fun! As you can imagine, transporting the sheer weight and volume of all this gear became prohibitive, so we replicated the setup in the US. Unsure what happened to all that gear when the band broke up!

The True Colours album is such a fantastic rush of energy, even after all these years. Do you remember the band actively deciding to make this happen in the wake of “the punk revolution” or was it more that you’d got a head of steam after the frustrations of the previous few years?

I think some members of the band were more aware of and wanting chart success, and everything that went with that, than others. I was blissfully ignorant of the extent of everything it took to become successful. I thought that if we simply persevered people would eventually see how great the band was and how brilliant our songs were … and in spite ,of myself, I was right! Tim, who was more savvy than me, was also right in thinking he needed to write songs that “connected” more than earlier material. Neil likewise. So there was a determination to succeed from the band and we each did what we felt necessary to achieve that. In hindsight, the previous seven years’ graft was not only useful but imperative to becoming a great live band and learning the art of songwriting and all the other facets of a band’s activities. Promo is an art in itself – one which I was banned from taking part in, as I seemed to lack certain filters. The guys called it “dropping clangers”. 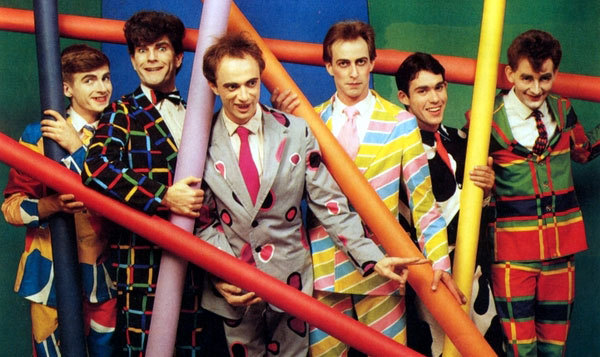 At the time were you influenced by the post-punk keyboard sounds of groups like XTC and The Stranglers, or do you feel you were pretty much out there on your own?

We always knew we were doing something outside of trad rock’n’roll and went out of our way to shun black t-shirts, tatts, long hair – all the regalia of the average rock band, including the music styles and patterns. We were a sort of “exclusive brethren” … anybody who dared wear jeans was roundly mocked! Personally, I didn’t then and still don’t listen to music recreationally. Any music I heard outside of our own was mostly by accident, although I did have several fave keyboardists – Keith Emerson and Rick Wakeman included. So if there was influence from bands such as those you mention it was unintentional. I still spend all day in my dungeon (studio) playing, mixing and writing mostly for no particular reason, so the last thing I want to do is listen to music outside of those hours.

Your work on True Colours and other Enz albums is so integrated/soldered into the songs that I’m intrigued at the compositional process. So many keyboard parts on other groups’ albums sound like additions or dressings on top of songs. How did it work?

What you have to remember is, most of the songs had already been worked up in rehearsal studios, and also played at gigs – so the keyboard parts (as with everybody’s parts), were well cemented before the recording happened. Gigs are the best place to strut the stuff you’ve worked out in rehearsal. The songs and our parts either work, or they don’t, in that context, so it follows that the songs that work the best “live”, will probably be the ones you record. You also develop a nose, over time, for what sounds are going to work, what type of atmosphere you’re trying to create – which for me is the fun part. All those sounds at my fingertips! It was, and still is a great big, exciting adventure.

I remember absolutely loving ‘The Choral Sea’ and ‘Double Happy’ and when I had listening sessions with my pals we would listen to those songs first. It’s really unusual for a pop album to have instrumentals, least of all keyboard-based instrumentals, which would normally be considered the kiss of death commercially. Do you remember how they got the green light?

I’m not sure whether they were given the green light because the entire band actually liked them, but Noel and Nigel did, so perhaps it was just a tip o’ the hat to democracy. Tim was writing prolifically, Neil was now writing songs and they were incredibly hooky, so we had a huge amount of “proper” songs to choose an album from. I wrote catchy little tunes and they were always placeholders in the live set, usually as openers, so that was another reason they became more acceptable over time. They became a trademark of our albums from True Colours onwards. ‘The Choral Sea’ started with my jamming on a sequencer I’d borrowed whilst watching a doco on TV called – you guessed it – The Choral Sea. I couldn’t figure out how the sequencer worked, or even what it did, but somehow, in spite of myself, I came up with the basis of that song, which the others then had their way with. 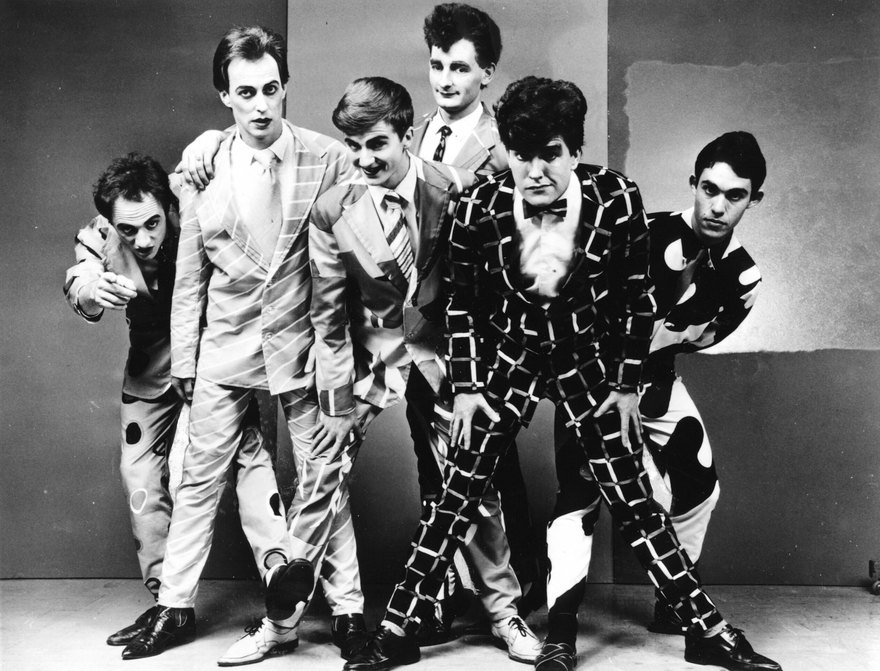 Can you explain a little about the remastering? I really loved your remastering job of the Enz catalogue back in 2006. This time you’ve remixed it as well. What was the aim?

I think of remastering as “sprucing up” and remixing more as a “ground-up restoration”. Remixing is also a chance to finally get the mix right. In this case, after 40 years! Technology and my skills with it have progressed to a point where I felt remastering would be good, remixing would be great! I’m confident in my mixing abilities and figured if anyone was going to remix, it would be me! I didn’t want to deviate from the overall sound or feel of the original album too much, but there were irritating issues with it, such as very loud hi-hats which I wanted to deal with. Also, Noel’s percussion was sadly neglected in the mixes back then, so I corrected that. Fifteen years prior, I’d been to Warners, sorted and catalogued every surviving Enz tape I could find, and knew the True Colours tapes still existed, hopefully intact. I just had to have them baked and digitised (they absorb moisture over time and become unplayable, so need to be baked in a low heat convection oven).

What do you personally think of True Colours after all this time? Thinking back, was it a great experience and a great time for you? Do you think of it as a peak moment creatively for the Enz or are there other albums you prefer personally?

I think it’s a good, credible album, and a fantastic chronicle of where the band was at musically. I’m proud of it and the success it achieved, but it must be remembered it came after seven years of incessant work – gigs, recording, video clips, TV appearances, rehearsals, interviews, and all other band activities, all of which served to promote the band and its songs. So I feel as if our time had arrived with this record. We felt we’d built a massive cache of goodwill from the public, and they were primed and just waiting for it. Whilst I can understand the success True Colours achieved, my “peak creative moments” happened outside of the recording studio, in rehearsal rooms and during soundcheck. No pressure to succeed, no microphones, no tape recorders. Just a team of like-minded individuals, on a mission, making it up as we went along. My personal favourite Enz record is Time And Tide. Can’t wait to remix that! (Howls of derision from the band).