At the tail end of their lifespan Tamburlaine recorded a little known one-off single at Sonic Studios in Wellington. 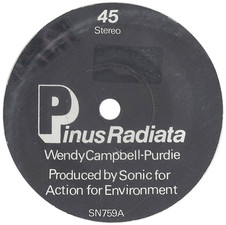 Entitled ‘Pinus Radiata’, the lyrics were written by Wendy Campbell-Purdie, a New Zealand-born conservationist. It was while working in Corsica in the 1950s that Campbell-Purdie, a farmer’s daughter, became interested in trees. Then based in England she moved (with a one-way ticket) to Morocco in 1962 and began a project to counter “desertification”. Concerned that the Sahara was expanding, she was determined to try to reverse the process by planting trees. She believed that “green-wall agriculture”, as it was known, would not only provide employment but also create a microclimate for planting crops. She repeated the exercise in Algeria with some success, writing of her experiences in the book Woman Against The Desert, published in 1967 with an introduction by Iris Murdoch.

‘Pinus Radiata’s lyrics get straight to the point: “Kill the bush, plant the pines, and watch the money roll.”

Campbell-Purdie was appalled by the New Zealand Government’s approach to exploiting native forests (in the 1970s, pristine South Island forests of native beech trees had been put up for tender by the Government for chipping and milling for paper pulp, to be replanted with fast-growing pinus radiata). Her lyrics got straight to the point: “Kill the bush, plant the pines, and watch the money roll.” Campbell-Purdie was a friend of the mother of Tamburlaine’s Simon Morris and, through her, persuaded Morris to enlist his band to record her song. (Campbell-Purdie died in Greece in 1985, aged 65.)

At this point Tamburlaine comprised bassist Morris, Steve Robinson and Rob Winch on guitars, Paul Davies on drums and Peter Woods on keyboards.

Having written the music for the song Morris was in two minds whether to go up-tempo with a bluegrass vibe or all-out, in a more Strawbs-like protest anthem. In the end the band attempted both, with one version featuring on each side of the single. Morris handled the vocals himself, with Robinson, Winch and Woods providing backing vocals. Recorded and mixed in one day, the single was released with no mention of Tamburlaine on the sleeve, but credited to conservation movement Action For Environment.

Although the single seems to have disappeared without a trace, the New Zealand conservation movements of the 1970s halted many potentially disastrous government forestry plans and fostered a greater awareness of environmental issues that continues to this day.