The Public Image of Sharon O'Neill, 1983

September, 1983 – These days Sharon O’Neill has a somewhat confused public image. On the one hand she’s considered wholesome enough to grace the cover of the NZ Women’s Weekly (among weeks on end of Princess Di). On the other Truth runs a headline screaming “NZ Rock Star’s Video Banned”.

Even O’Neill’s arrival to meet Rip It Up served to emphasise this confusion. There in the quietly upmarket lounge bar of Auckland’s Sheraton hotel her entrance drew a double take and quizzical looks from a couple of middle-aged patrons. Was this blonde in leather boots, jacket and tight leopard-skin pants a guest or …? It was doubtful if they recognised her as the woman who had sung on that Royal command variety show and who had just recently been accepting pledges on Telethon.

O’Neill may have missed the stares but she is very conscious that her public persona doesn’t quite fit where people are accustomed to placing it.

“It’s taken a long time for people to know what I do and what I’m about. It’s taken time here, and in Australia they’ve only just started really with this album. And in America …” she sighs. “What I do isn’t specific in terms of an image. I’m not part of any new look. I’m not trendy. I perform my own songs and because of the types of music I write it’s very difficult to have an image.”

Seated in the bar, despite her quiet and thoughtful words, O’Neill’s appearance almost suggested a rock’n’roller of the Joan Jett Variety.

“Well Joan Jett suggests raunch. And some of my stuff can be too, but then I write stuff like ‘Maybe’ and ‘Asian Paradise’. I’ve got this mixture of ballads and rock material that presents me with a problem. All I can do is present something in between which is hard for people to cope with. But I have to be there because I want to do both types of material. To get out, dressed head-to-toe in leather and sing ‘Maybe’ would offend some people. It is frustrating at times.”

Is there any one performer’s image or approach to the public that she would like to emulate?

“I idolise Elton John, definitely – in terms of his writing quality, his keyboard ability, being able to reach such a wide audience, his flamboyant stage presence. I think he’s wonderful.”

O’Neill would like to become more flamboyant on stage then?

She laughs. “Oh I don’t think I could. I guess it would help to be gay.”

Her unabashed admiration for Elton John might draw sneers from modern music elitists. Indeed in some circles O’Neill’s name elicits condescending dismissal. She shrugs this off.

“It originates because I started out as the hometown girl singer doing Linda Ronstadt covers or whatever on TV. Women’s Weekly material. But then I began to work on my craft which I want taken seriously. But that takes a long time. There’s been a lot to shake off along the way.”

In Australia she doesn’t appear in Women’s Weekly and doesn’t want to. While she isn’t, as she puts it, “trying to make any heavy Midnight Oil-type statement or anything about the media,” she has found a more ready acceptance in the rock venues over there. “But,” she hastens to add, “the main thing over there is of course the wider population. In New Zealand my MOR status helps fill the theatres, and if I win some people over with the rock stuff that’s great but I don’t want to upset the mums and dads either. In Australia there’s enough of a rock’n’roll market to make it work just in that area. But I love the ballads and slower stuff anyway.”

O’Neill’s recent album, Foreign Affairs, contains fine examples of all her writing styles. ‘Danger’ is pure-pop mastery of the sort that Ms Newton-John or those ex-Abba women would dearly love to get hold of. ‘Take the Fall’ is another of the naggingly lovely ballads that O’Neill can specialise in. (The heavy pop-rock of ‘Losing You’, the current single, is quite atypical.) ‘Hearts on the Run’, with its racy keyboard work, even suggests a jazzy influence. A new direction perhaps? 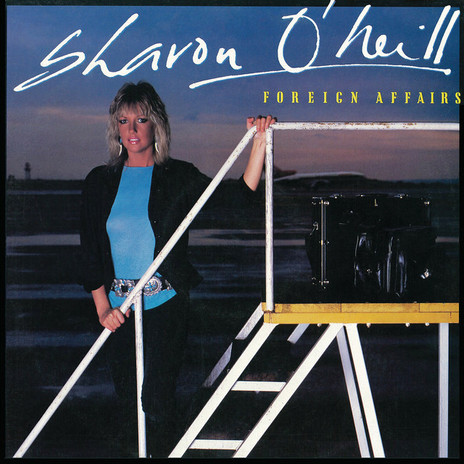 “Well I’m always interested in exploring more areas like this. I almost used a drum synthesiser on that track actually. The new keyboards player on the tour has got a lot of toys like that. I could be interesting.”

So with all these good tracks why hasn’t the album had greater success? Perhaps it comes back to image again. It could be argued that some of O’Neill’s own career decisions have been less-than wise. The two recent videos have hardly boosted sales. Firstly the original ‘Maxine’ was banned and, whatever one thinks about media censorship, the film – concerning a day in the death of a Kings Cross hooker – did get pretty tacky (for instance the image of O’Neill wheeling along a corpse with a “case 1352” tag loped over its big toe). Now, in ‘Losing You’ we see her, among other activities, throwing a tantrum as she tries to ram her love’s shoe down the kitchen-sink waste disposal.! Foot fetish may be an interesting video concept but it seems a dubious marketing appeal. However O’Neill stands by her videos, although regretting the fate of ‘Maxine’.

“I just don’t think there’s any justified reason for not showing it. Any offensive bits – such as there were – were edited out. The razor blade bit was cut out. In Australian it was given an “adults only” rating which means only late at night so it won’t get on the major programmes. We also had a problem in America. MTV, the cable rock channel, wouldn’t play it. It’s doomed.” 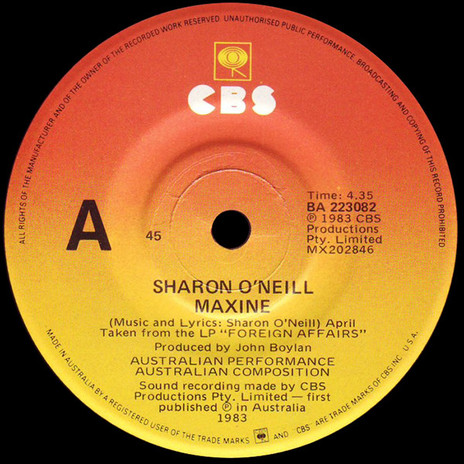 There have also been suggestions that the new album is mistimed for the American market. “Possibly it’s come out at the wrong time. What’s happened is that all the English music and Australian music is going so well there. The general feeling I get up there is that why have I come from this part of the world, gone up there and used American musicians that they’re sick to death of. I don’t think the album’s sound is as totally American as some people say but it’s definitely more that than anything else.”

Simply the associations of some of the West Coast names she used on Foreign Affairs may serve to pigeonhole the album for the American market. Karla Bonoff or (ex-Poco and Eagle) Timothy Schmit for example.

O’Neill nods. “And they’re all so established now. It’s very hard to be slotted in with them. Bonoff, of course, started by getting her songs covered by Ronstadt – and to get that you’ve first got to write those songs. By the same token, Bonoff’s now used other people’s songs in order to get a hit herself. That’s fine but I don’t want to do that if I can help it.”

She has, however, recently had one of her own songs covered by a Canadian band called Jensen Intercepter. “It was ‘Long Distance from Singapore’ from the Maybe album. Just to hear another version of a song of mine – to think that a bunch of people got together in a studio with one of my songs, that they might’ve at one point got excited about it – that gives me a real buzz. There’s a lot of energy on the track. I was rapt.”

Her thoughts return to Foreign Affairs. “I’m still glad I did it over there because recording in America’s something I’ve always wanted to do. I learned a lot, and if it’s not the right time for the album I’ll still be able to use it. But I’m not thinking negatively. Anything can happen and can take a long time to happen.”

She pulls a face and says with mock solemnity, “You’ve got to be positive about these things. It’s just timing. I’m not giving up yet.”

Indeed, in a business where overnight sensations are common and just as long lasting, O’Neill’s slowly developing career speaks volumes, not only about the longevity of her talent but her determination to succeed. Ten years ago she had only recently turned professional and was gigging as vocalist for Chapta, a Christchurch band. Chapta are long-since defunct but this month the now-expatriate O’Neill is leading her own band on a tour of the country’s major venues.

“To me New Zealand is still home. I come back so often that it doesn’t get a chance not to be, though this is my first tour for years. It’s just a shame that I couldn’t do what I’m trying to do from here. So although Australia is important, professionally I still feel a New Zealander. I push that. You have to over there.”

Recently some Australian tourists were browsing in a central Auckland record store that was playing Foreign Affairs over the PA. “Sharon O’Neill?” enquired the Australians of the shop assistant. “You know about her over here too, huh? Good, isn’t she.”

First published in Rip It Up, September 1983