The No Tag/ Dead Kennedys connection 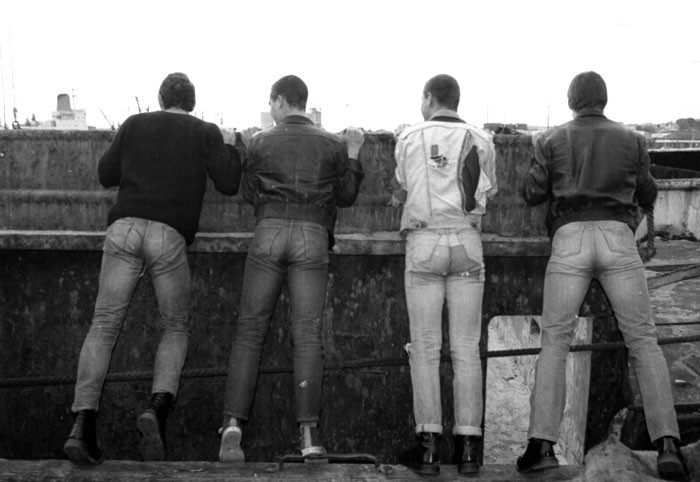 Many New Zealand bands have contacts with international artists, and No Tag were lucky enough to form a bond with Jello Biafra, singer of the Dead Kennedys, after supporting them at their one Auckland show, which later led to some of the band singing backup vocals on the DK’s album Bedtime For Democracy. This is the story of that relationship.

When you’re in a New Zealand band and an overseas artist in your genre of music comes to town, there is always a hope that you can get on the bill.

When you’re in a New Zealand band and an overseas artist in your genre of music comes to town, there is always a hope that you can get on the bill. Some of the time you do, but a lot of the time local promoters use their friend’s bands, instead of the obvious choices.

This was the situation that No Tag had when The Dead Kennedys announced two nights at Mainstreet in Auckland on 5 and 6 August, 1983. When the gigs were announced, we made some inquiries, as we assumed that we were the obvious choice to support a visiting punk band. The response we got back was that the band had asked for “no punk bands” as support acts, as they didn’t want the crowd riled up before they played, and wanted to decrease the possibility of fights at the gig. We later found out that this was a big load of BS.

I have to back up a bit here, and mention that through the Resurrection Punk show I hosted on Radio B on Sunday nights, my co-host Neil Cartwright had a regular contact, via letter, with Jello Biafra. Neil got records for the show from him and advice on who were the good up and coming US punk bands. Neil had mentioned No Tag as a Kiwi punk band, and I believe he had even sent a cassette to Jello with some of our music on it. As it happened, we even had Jello prearranged as a guest on the show, on the Sunday night after the two gigs.

Back to the story … on the Thursday evening around 10:30pm before the gig at Mainstreet, I had finished my shift at 89FM, where I was working at the time, and went out for a beer at one of the local nightclubs. I had just ordered my first beverage when in walked a bunch of punkish looking people I didn’t recognise from around town, but they were with an Australian promoter who I knew well from the many different gigs he had done in NZ. So I walked up to say “Hi” and found out who the people he had with him were. Lo and behold, it was the Dead Kennedys. I hadn’t recognised them in the low light of the nightclub. I took the opportunity to ask the promoter and band why they had stipulated that they didn’t want punk bands as their support act, and they looked at me like I was stupid. “Who told you that?” I was asked, and I explained that the booking people had told us they had asked for that because of the fear of violence at the gig. There was a massive roar of laughter from the band, who told me that it was absolutely untrue. I explained that No Tag were the obvious choice for support, and as Jello had already heard of us, he asked the promoter why we weren’t supporting. 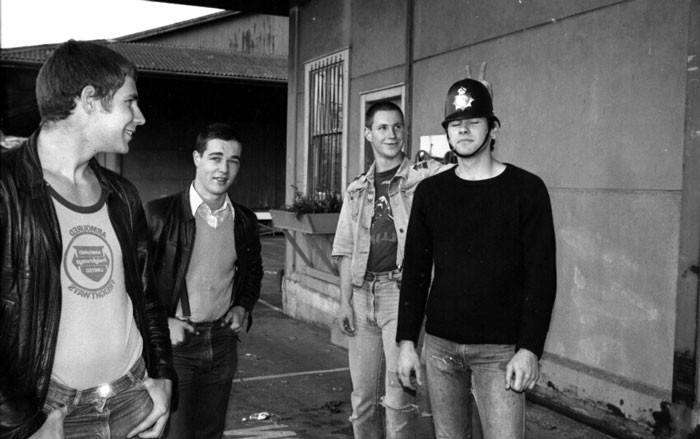 The promoter, and the band’s tour manager, said that they would ask for us as support, but we wouldn’t get an answer until tomorrow and that would be too late for the Friday night show, so it would only be the Saturday.

On Friday, after hearing that we were added to the line-up for Saturday night, I called all the rest of the band, and, as we hadn’t played for a bit, realised we needed some rehearsal as soon as possible. Thankfully I knew the soundman at Mainstreet at the time, and when I was up at the venue on Friday night for the first DKs show, I mentioned to him that we were going to play the support slot the following night, but desperately needed a place to rehearse. He said, “Why don’t you just rehearse here, I’m coming in tomorrow afternoon to do some work, so you can rehearse here. Anyway, I need to test some things, I need a band playing so I can do that.” 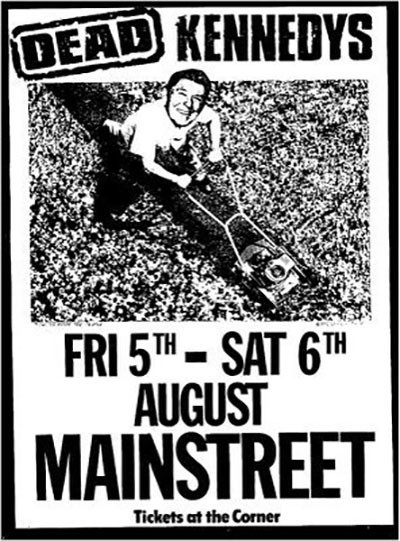 The Dead Kennedys at Auckland's Mainstreet

So on the afternoon before the show, we had a long rehearsal with full onstage monitors, pretty much a three hour sound check. After the rehearsal, we went to a BBQ that the band had been invited to. Jello wasn’t there, but the other guys, East Bay Ray, Klaus Flouride and DH Peligro, were. I still remember Peligro skateboarding down Scanlan Street, doing some pretty good moves.

That night we probably played our best gig ever, and in the process impressed the DKs. They were full of praise backstage after we had finished and while the other “non punk” support act played their set, we hung out backstage as the DKs got ready. They were phenomenal, playing all their well-known songs. Jello even called out a boot boy who was causing trouble, and dedicated ‘Nazi Punks, Fuck Off’ to him. It was hot, the place was packed, and the band delivered. It was a great night.

The following evening, as I mentioned before, we had Jello as a guest on Radio B for the Resurrection Punk show. Neil continued to keep in touch with him, Jello even wrote a piece on the NZ punk scene for the US punk magazine Maximum Rock and Roll, mentioning No Tag in the column. 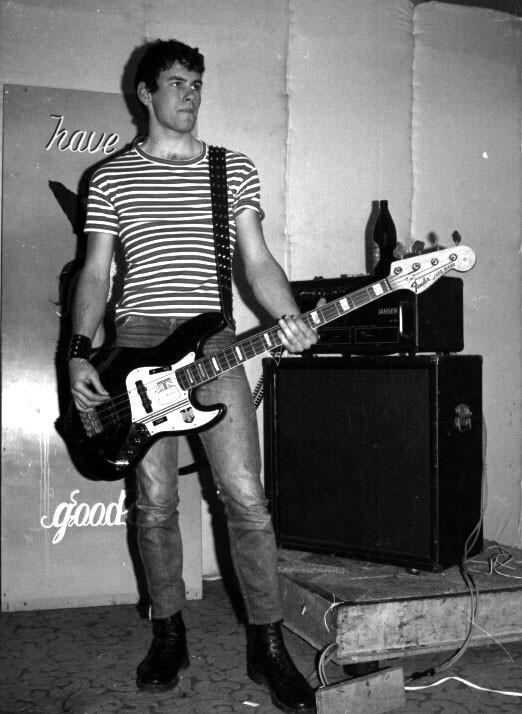 Part 2 of this story begins in early 1986 when No Tag decided to move to London to seek fame and fortune. We had this crazy idea that we would go via America, fly into Los Angeles, and catch Greyhound buses across the continental United States, stopping in towns, finding the local punk scene and offering to play for free if there were any gigs. We would then fly out of the US from New York two months later. Unfortunately our singer, Paul Van Wetering, wanted to go to London via Asia, so Mark Sullivan, Carl Van Wetering and I decided we would still try this crazy idea, but do it as a three piece, with me singing. A few weeks before we were going to leave, Mark had some family issues he had to stay behind and deal with, but told us to go anyway and that he would meet us in London later on. This screwed up the idea about playing in the US, and now Carl, his younger brother Mark (who was moving to London with us), and I had tickets from Auckland to Los Angeles, then, two months later, New York to London. 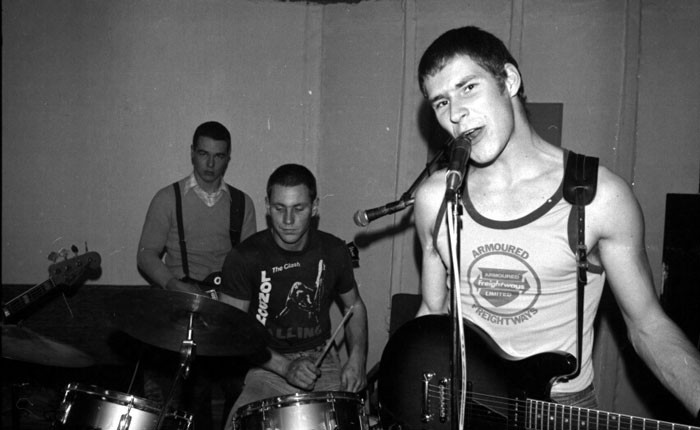 We still decided we’d do the “across America” concept, so Carl, Mark Van Wetering and I left New Zealand in June of 1986.

We still decided we’d do the “across America” concept, so Carl, Mark Van Wetering and I left New Zealand in June of 1986, flying into Los Angeles where we stayed for a few days, but started going through our meager savings pretty quickly. We caught a Greyhound bus up to San Francisco, arriving in the early hours of the morning. We were very worried about conserving our spending money (so that we had enough left by the time we got to London), and we knew someone in San Francisco that had said we could come and stay with him. We had already spent a lot of money just being in Los Angeles, and also knew we had to make it to New York somehow, if we were going to make it to London. That person in SF was Keith Dion who used to play with the Kiwi band, Ponsonby DCs. Unfortunately, we didn’t have his phone number or address, so the only person we knew of in San Francisco was Jello Biafra. The next day, after staying in an overpriced one bedroom hotel room the previous evening, we pounded the streets of San Francisco looking for the office of the Dead Kennedys record label Alternative Tentacles, as we knew we could find Jello there. Once we found it, Jello said hello and asked how we were, but then excused himself, as he had just been hit with the charge of “distributing harmful materials to minors” because of H.R. Giger’s Penis Landscape poster that came with their album Frankenchrist. Jello had to work with his lawyers pretty quickly to build a case, and due to the potential forthcoming trial costs, had to set up the No More Censorship Defense Fund, so he was fairly busy at the time. Not surprising seeming that he faced a year in jail and a good sized fine as well.

Luckily, the DKs manager at the time was chatting to us, and we asked if she knew Keith Dion. She said she did, and a few phone calls later, we were in contact with Keith. He had a place on the corner of Haight and Ashbury, which is a tourist mecca because it was known as the center of the hippie movement in the late 1960s.

Haight Street was cool, we even saw English band The Mekons do an in-store acoustic performance at one of the local record stores. Generally though, we didn’t know of much to do during the day while Keith was at work, plus, we were quickly running low on funds. We had made the decision to just fly from San Francisco to New York, and brought forward our New York to London flights. So, all we knew to do was to hang out at the Alternative Tentacles office, which they shared with the punk record distributor Mordam Records, and the magazine Maximum Rock and Roll. It was a cool place to loiter at, as there was always some loud punk music playing on the stereo, and they had an area with couches that we could just lounge on all day, drinking cheap, average tasting American beer.

One afternoon Jello had a chance to come and say hi again; he had been on the phone to his lawyers almost all the time we had been down there. He asked us, if we were not doing anything tonight, would we want to come and sing backing vocals on the new Dead Kennedys record. We said yes immediately, as we didn’t have anything to do that evening, and furthermore would have cancelled it if we did. The opportunity to sing on a DKs record was massive to us, being just a few punks from New Zealand. That evening we went to Hyde St Studios and recorded backing vocals with Jello on three songs, ‘Chickenshit Conformist’, ‘Draw The Line’, and ‘Fleshdunce’. 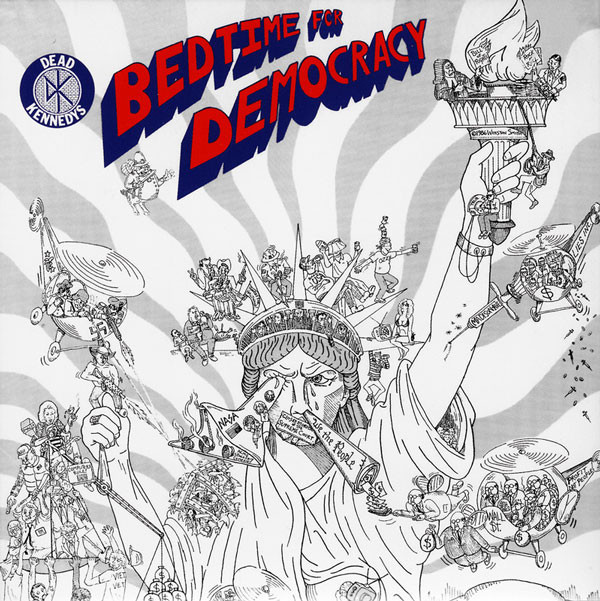 The Dead Kennedys' Bedtime For Democracy (1986)

Afterwards we went out and saw a few local bands with Klaus Flouride, who was producing another local band at Hyde Street Studios, and had invited us out after we finished with Jello. The next day or so we flew out of San Francisco to London to begin our adventure there, but that’s another story.

So from a chance meeting in an Auckland nightclub all the way to a big studio in San Francisco, here endeth the story. I still see Jello around town on a regular basis, his current band, Jello Biafra and the Guantanamo School of Medicine rehearses in the same studios one of my current bands, Skinaffect. He still remembers the Mainstreet gigs, including calling out the person creating trouble. He has a good memory, that’s for sure… and these are good memories for me. 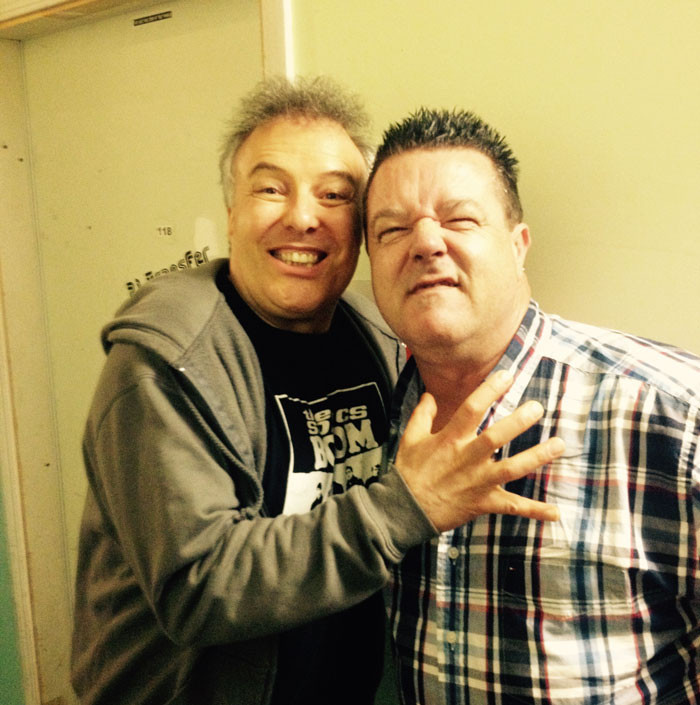