Max Merritt and the Meteors shifted their base from Melbourne to the UK in October 1970. The band then comprised Merritt, Stewie Speer (drums), Bob Bertles (saxophone), and Dave Russell (guitar and bass). The four of them and their families lived together at first.

“We found a lovely house down in Reigate in Surrey,” says Russell, “so we could commute to London to do gigs then get lost on the way home in the fog.” 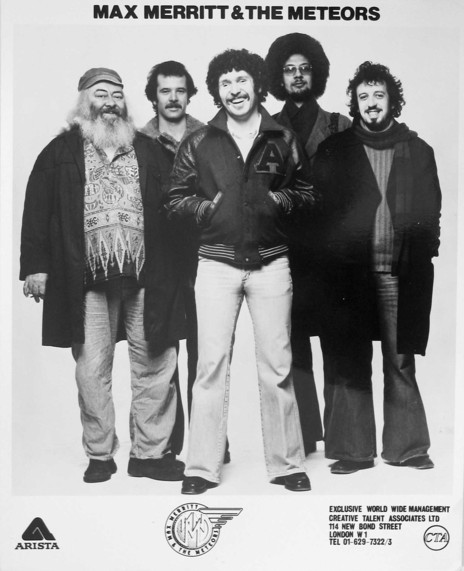 Max Merritt and The Meteors in the early 1970s in London, with the late Stewie Speer on the left. This was the band that recorded Slippin’ Away.

They played some iconic London venues including the Rainbow Theatre, which was one of the venues where they supported Slade. The 3,000 seat Rainbow, on Seven Sisters Rd in London’s north-east, had hosted stand-out performances in the past and was where Hendrix is reputed to have first burnt his Fender Stratocaster. The band got work supporting shows both in the UK and in Europe.

Russell: “We had a good time in England. How this for a line-up: Max Merritt and the Meteors, Lonnie Donegan, and Sweet? Pretty funny! That was at Blackpool or somewhere where they had pantomimes. They had a pantomime in the afternoon then they had Max, Lonnie and Sweet.”

They played in Soho at venues the Speakeasy, the Bag of Nails, and at the famous Marquee Club. So many well-known people performed there: John Mayall, the Who, the Stones, Cream, Queen, the New Yardbirds, Jimi Hendrix, and Pink Floyd.

After the death of Jim Morrison in 1971, the three remaining members of the Doors toured Europe using hired musicians. During 1971 Max and the Meteors played with them in Amsterdam and Brussels.

Russell: “They weren’t unlike a Māori showband, quite unusual. They really knew how to work the crowd. They had a bass player who was way over at the edge of the stage just poking out in the wings cos he wasn’t part of the band. You could just see him. I thought that was a bit funny. [Ray] Manzerak played piano and did all the singing. He sounded just like Jim Morrison as well. John Densmore was on the drums, a very light player – a bit jazzy on it – he just cruised away. They had Robby Krieger on guitar and had another guy playing guitar as well.

“Krieger came out and did ‘Light My Fire’ – did this big solo. It was fantastic, then he stepped back and grabbed the other guy by the arm, pushed him out the front. ‘Go on, your turn.’ There was a bit of show about it. It was very good. It was a good period for them.”

Watching the Doors perform, Max and the Meteors could see a few things from the show that they could use. Russell: “Which of course was what we did when we came back. Pinched a few ideas and made the most of it.”

From their UK base they returned to Australia to play at the first Sunbury Festival in January 1972. Evans noted that the band were pretty much accepted as locals and described their return from the UK as triumphant, commenting, “Max had definitely won back his previous following.”

Back in the UK they played in pubs in London and went to Europe a number of times. During 1972 in Paris they supported the Moody Blues, the classic Birmingham band formed back in 1964, who had great hits including ‘Go Now’. 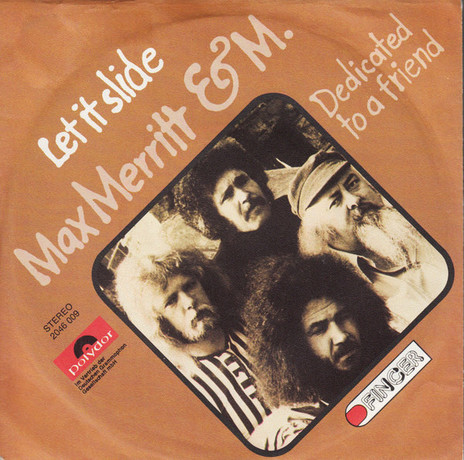 Max Merritt and the Meteors - Let It Slide (1972, Polydor/Finger Germany)

They often played at university gigs. Russell: “We did lots of student-uni things. We’d travel for miles all the way up the M1 and stop off at some unusual place and play at the university – maybe in Liverpool. We went there and played at a club; quite a large club on different levels. On the downstairs level was ELO. Upstairs was us and the Crickets – the old Buddy Holly boys. Or some of them. Glenn D Hardin, who was Elvis’ pianist was on the piano and Jack Bruce was on bass. So, a bit of an unusual Crickets.”

In 1972 the band did some recording. This included the rocking, Merritt-penned ‘Let It Slide’ b/w ‘Dedicated To A Friend’, released on RCA in the UK and Australia (and Polydor in Germany).

In 1973, in the Reigate house when they were all in the “telly” room watching Top of the Pops, they saw artists Rod Stewart and the Faces, David Bowie, Gary Glitter, Sweet … which led to Russell describing the issue of the band fitting into the UK music scene in those early 70s years. “We were a funky, jazzy, elderly-men band. Well, that’s how it seemed compared to all the young Brit contemporaries. We could go to a university pot-head crowd. They could dig it. We could win them over but anything where there were young people who knew about Bowie, and the Faces ... We were the wrong band in the wrong place at the wrong time.”

Unsurprisingly, work in the UK dried up and so did the money. Russell: “We all moved out of the big house. Stewart went to the city to a little basement apartment. Max moved down to the gate – to the stables on the property. Bob and his family moved down to the gatehouse. I stayed on with our manager and his wife and child in the big house until we got a place a few miles down the road, another gatehouse actually.

“Max came down one day. He was incredibly apologetic. Max is a lovely man, very honest and very humble. He said, ‘We can’t keep it going’. I was the guy on the wages. I was the new guy in the band, the other three were partners. ‘We can’t afford to pay you any more, so …’”

Soon after, Russell went back to New Zealand and Merritt went back to laying bricks like he had all those years earlier when he worked for his father. But by late 1974 he formed another version of the band. This included Speer after he had completed a tour with famed UK blues man Alexis Korner. The others in the Meteors then were English musicians Barry Duggan (saxophone, flute), John Gourd (guitar, keyboards) and Howard Deniz (bass). 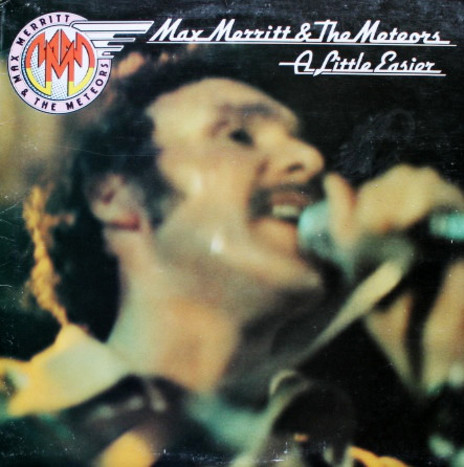 Max Merritt and the Meteors - A Little Easier (Arista, 1975)

Merritt and his band had done the hard yards in London and delivered a professional sound. Importantly, the grapevine had told Clive Davis about them. Davis started Arista in the US in 1974 and had been known for pursuing the Kinks for years. When he signed them, it was 1976 and their signing to the label helped revive their US profile. Davis signed Max Merritt and the Meteors to Arista in 1975, which meant they became the first band he signed to the label’s UK branch.

Their first Arista single, released in 1975 was the Merritt original ‘A Little Easier’ b/w ‘A Long Time Gone’ and their first Arista album A Little Easier included the song of the same name. This album included additional originals from Merritt – one of them the evocative ballad ‘Slippin’ Away’ – and was widely released in the UK, New Zealand, South Africa, Germany, and Brazil. 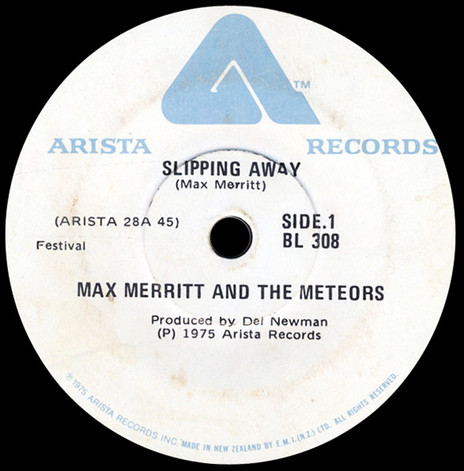 Max Merritt and the Meteors - Slipping Away (Arista, 1975)

‘Slipping Away’ reached the No.2 spot on the charts in Australia and No.5 in New Zealand in late January 1976. This song has subsequently become an enduring Australasian favourite. Of the album, Australian music writer Paul Conn noted, “The more subdued production enabled Merritt to show his vocal prowess on songs such as … ‘Coming Back’ and the title song of the LP.”

In 1975 Lance Dixon (keyboards, saxophone) replaced Duggan. From that point, there were no more line-up changes for the remaining years of the band. Their second Arista album, Out of the Blue was released in 1976. It included the tear-jerker, ‘Whisper In My Ear’, and the song previously released in 1972, ‘Let It Slide’, which was released as a single for the second time. Conn noted this album and its predecessor had a “confident and assured style”.

Their final Arista single ‘Blame It On The Reggae’ was lifted from the album. Following the album release they did a three-week tour of Australia to promote it. Their last album for Arista was recorded at shows in June 1976 at the Dallas Brooks Hall in Melbourne while they were in Australia touring Out of the Blue. They returned to the UK but the end was in sight. In 1977 Merritt wound the band up for a final time.

He was reflective about his time in the UK. “I lived in London for 10 years before coming here [to LA],” he told me in 1997. “I loved it but found it depressing after a while. It was very hard to get up and be creative and inspired when the weather was grey.”