New Zealand, 1966. The country, like the rest of the world, is hearing new sounds in the development of popular music. Even radio in the shaky isles is giving our ears more R&B and blues-based music, not just pop or songs deemed acceptable for family-friendly radio programmes. Radio Hauraki has certainly helped expose us to great sounds coming out of the UK and the US.

People in Auckland are talking about this new group. I go to the Platterack to hear them. There are five of them: they’re all teenagers, like me. I find a spot opposite the stage area so I can watch their playing from where I’m sitting. Their singer has an amazing voice. The organ intrigues me and gives the band a sound I haven’t been aware of at other dances in Auckland since I’ve been there; this is my first year up from the provinces. I’m torn between watching the singer and watching the guy playing the organ. There aren’t many people at the Platterack and I feel conspicuous. I do care but I’m staying because I want to hear more. 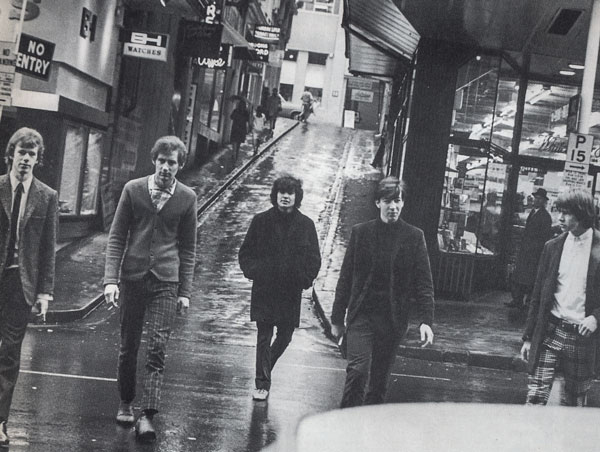 Kevin Borich, Trevor Wilson, Brett Neilsen, Phil Key and Bruce Howard are the five in this group. They are The La De Da’s of course. They are wearing street clothes, not suits like all the other Auckland bands. As well as sounding great, they look great too. Later I keep thinking about the sound of the organ and when I hear songs by UK bands like the Spencer Davis Group, I know this is the sound I heard.

Suddenly The La De Da’s seem to be everywhere: on television, in magazines, on the charts. The October 1966 issue of Teen Beat has a colour photo of them on the front. Late in the year their first LP is out, so I rush and buy it. I play it over and over again, and take it with me when I head to Christchurch for 12 months in January 1967.

Kevin was just 17 when he wrote his earliest song to be recorded by The La De Da’s: ‘Ever Since that Night’. It was the B-side of their first single. “You know what?” he told me in 2015, “I’d just learnt a major-seventh chord, which I called ‘the love chord’ and I went all gooey.” During the interview we talked about the emotions the song sparked in teenage girls after its release back in 1965. He said, “That’s what music is all about; the emotions. It takes you on a ride.” 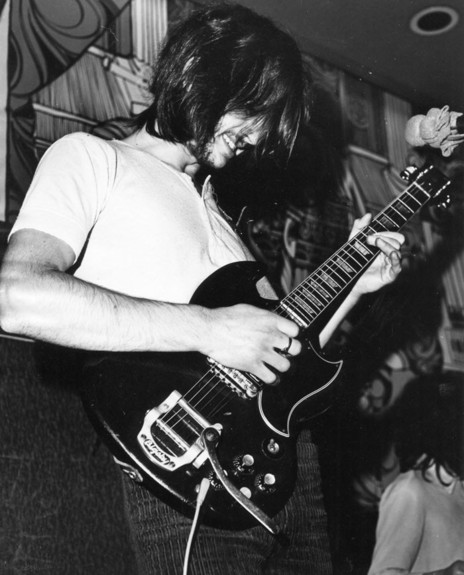 The opportunity to record ‘Little Girl’ b/w ‘Ever Since that Night’ was the group’s reward for singing ‘Those Magnificent Men In Their Flying Machines’ on television to promote the film. The single came out on Talent City records in June 1965. Kevin co-wrote the A-side with Trevor. Copies of that single are now as rare as knitted fog but both songs are on the 2003 EMI CD La De Da’s, and the audio version of ‘Ever Since That Night’ is on YouTube.

Australian rock historian Ian D. Marks described ‘Ever Since that Night’ as a “rather touching and soulful narrative ballad” but he didn’t mention the sadness it evoked in teenage girls in 1960s New Zealand, or recount the sound of impending loss in Kevin’s voice:

A verse later we discover that this girl is just in town for a holiday making the singer’s plight more desperate – while the backing harmonica wails the most mournful addition to the lyrics. The recording is raw and basic and fits the sentiments in the song.

By the early 1970s Kevin was writing more songs: some on his own, like the driving ‘Gonna See My Baby Tonight’ and others – such as ‘Morning, Good Morning’ – with Phil Key. When Key left in September 1972, the band became a trio, with Kevin, drummer Keith Barber, and Ronnie Peel (aka Rockwell T James) on bass. Kevin becomes the primary songwriter, lead vocalist, lead guitarist and front man. Kevin and Ronnie had known each other from their Auckland days, when Ron was one of the Aussie Pleazers.

The first LP by this line-up of The La De Da’s was Rock ’n Roll Sandwich (EMI, 1973). It was recorded in an old theatre, with the trio playing the songs as if they were at a gig so they got a “live” sound. It was produced by New Zealander Rod Coe and contains the track ‘The Place’ which came out as a single the following year. This song has a sense of humour. “It has great lyrics,” says Kevin. “Great slide guitar. Keith helped with the lyrics.” It has those two wonderful hippie policemen Be-Bop Annie and Tokyo Joe, and then, standing at the bar, is someone the singer thinks he knows:

Hey, look back there up against the bar?
Isn’t that Rockwell T. James, the recording star?

In 2000 the Kevin Borich Express released the Heart Starter album which includes the haunting ‘Saved by the Blues’ written by Kevin, bassist Harry Brus and Lorraine Freeman. Love exudes from the lyrics of this slow-paced song about the power of the blues and their restorative qualities. The words and music say it all; on CD it is so beautiful that further description only detracts.

In 2005 Kevin was diagnosed with nasopharyngeal squamous cell carcinoma. His cancer and its treatment put him out of action for some time and left him with a loss of his salivary glands and some loss of hearing. To stop the development of bone disease he endured months of dental treatment and a long course of hyperbaric treatment. In fact, even though he required surgery, he had to agree to do 60 dives at 14 fathoms. “If radiated bone gets exposed to air you get this disease: the bones start rotting,” he said. He also required radiation and chemo.

One of Kevin’s most powerful songs is ‘Fight On’, a battle song about his cancer diagnosis; it was released on the Totem CD in 2014. The battle-cry “fight” opens the song, and the need to “fight on” repeats throughout. There’s the dreaded c-word, the desire to deny it and the associated fear. The song, with its pounding off-to-war rhythm, marches on. It knows its enemy and compels the warrior to fight to win against the odds. Yet even in this song of grit and determination Kevin’s humour is present:

This article started with 1966. Kevin was in The La De Da’s from late 1963 until 1975, when he was the last original member. After the break-up of this trio, he worked with other musicians in a number of ways. He toured with the John Paul Young All Stars, formed Kevin Borich Express in 1976, was in the Party Boys during the 80s and, in 1990, helped Jimmy Barnes by replacing another guitarist to complete Barnes’s Two Fires tour.

Kevin has performed in New Zealand and in countries such as the USA, Fiji and Indonesia. He has won awards, and won praise from Carlos Santana, with whom he has played on stage. He has written many songs; his most-recent CD Totem came out in 2014. He has played widely throughout Australia, particularly along the eastern seaboard and in Tasmania, and he comes to Melbourne often.

It is a Saturday night in March 2016 at Musicland, a music venue amd music store in Melbourne’s industrial north. The show begins at 8.30pm with a support band we don't warm to. The Kevin Borich Express begins to play about 9.40pm but there are a few gremlins in the system so the actual start is a few minutes later. 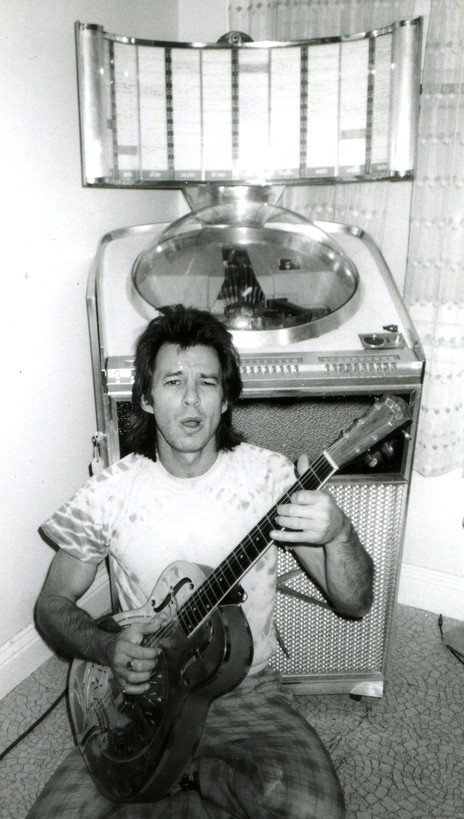 Kevin Borich and his jukebox - all rock, rhythm and jazz, shining like a National guitar - Sydney, 1986 - photo by Chris Bourke

In the intermission Kevin moves from musician to small businessman to sell merchandise and I am struck by how gracious he is with the crowd, with the number of times he contentedly poses with a fan while being photographed by another, before he returns to play with the band.

An old rocker in his leather pants regales his mates with his knowledge. Looking at Kevin he predicts – as Kevin chooses his good Gretsch – that the next song will be ‘Celebration’. Instead, it was ‘Fight On’: Kevin’s battle song. Some in the audience smother giggles.

During ‘Tango Queen’ a very beautiful Spanish girl dressed in black steps away from the girl she has been dancing with to dance on her own. She’s in a world of her own. I wonder what Kevin is delivering that taps into something deep within her.

After the second set closes – with Kevin running ‘Gonna See My Baby Tonight’ into ‘Going Downtown’ – the crowd shouts for more. The band returns to do one more song: it has just gone 1.15am.

During our interview in 2015 he talked about the diversity in his song writing, noting he didn’t just write blues songs or rock, he liked a lot of different styles of music. “I noodle a lot and get emotionally involved in whatever topic I can put through my noodle. I’ve always done a bit of Latin and a bit of reggae.”

He noted that most of his albums have one or two songs of a slightly different style, while confessing, “I’ve got a lot of stuff that’s more romantic, more lovey-dovey.”

At gigs he plays the rock songs, which he describes as the “up stuff”. So ‘The Place’ and ‘Fight On’ are two songs his audiences often hear.

He is now 70 and shows no signs of stopping; his drive and determination are still there. In March 2018 he delivered a blistering performance at the Satellite Lounge in Melbourne. He is currently writing his autobiography and, late in 2017, released a remastered CD of Rock ’n Roll Sandwich, the magnificent double-sided album from 1973 which remains a favourite of so many La De Da’s fans.