Carol Has as Many Fans as Johnny

Billed as “Miss Rock’n’Roll” with the Johnny Devlin Show, tiny (she’s only five feet two) Carol Davies is gathering enthusiastic teenage fans in both islands during the company’s first New Zealand tour. Christchurch, Blenheim, Paeroa and others have formed fan clubs for the 18-year-old singer and in Auckland she shares a club with the great maestro himself, Johnny Devlin. 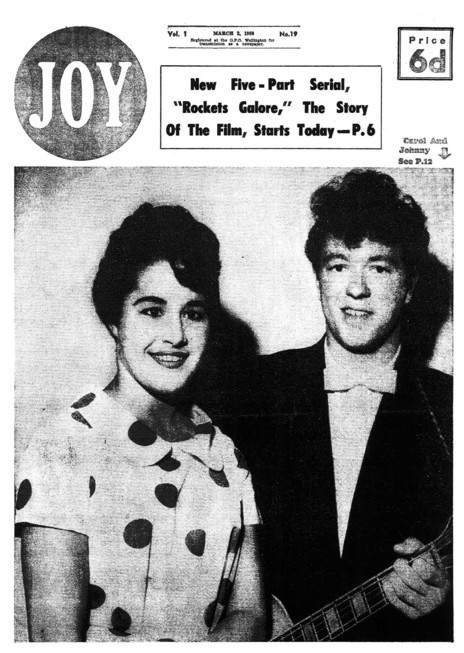 Carol Davies and Johnny Devlin on the cover of Joy magazine, March 2, 1959.

“Answering all that mail is getting more and more out of hand … I do it all myself and I have over a hundred letters to reply to at the moment,” she says.

But mail isn’t the only thing that gets out of hand when you are on tour for the first time.

Catching up with sleep, keeping your clothes fresh and well pressed when you travel all day and have a show at night, become major problems.

But Carol is one of those fortunate people. In the plainest cotton frock she has a well-groomed smart appearance; in the hour-glass skin-fitting sheath she wears on stage she is a picture of confident sophistication. Most of the credit goes to her neat little cap of softly waved shiny black hair, which she shampoos and sets herself. Maybe before breakfast, sometimes after the show at night.

Having rocked their way round the South Island – from Bluff to Nelson, Westport to Christchurch – the show is now making its return trip to Auckland after three months on the road. They ricocheted back through Wellington (where the tour started back in November last year) and were greeted by houses full of yelling, uninhibited youngsters who got as much physical exercise out of the show as the cast themselves.

When it came it came with a wallop.

That first show in Wellington was for Carol (as it was for most of the 11 members of the cast) her first really professional appearance with a touring show.

“I’ve been singing since I was a kid,” she says, “but merely as a guest artist at parties and odd gatherings.

“Both my parents have encouraged me, and my father was one of New Zealand’s own Ink Spot quartette in an act with one of the Tivoli shows years ago.”

A year as an invoice-typist after she left school assured Carol that she was really “just sitting around waiting for something better to come along.”

When it came it came with a wallop. It was only in July of last year that she joined up with Johnny Devlin, The Devils (the band), John Daley (compere of the show), Don Lillian, and Dennis and Dorothy Tristram (dancers), who form the nucleus of the present show.

They, as a group, visited smaller towns out of Auckland and before Mr R J Kerridge decided to back them in their New Zealand tour, they had already established themselves with an ever-increasing public in the Auckland area.

At this time Carol was also the leading vocalist at Auckland’s Peter Pan cabaret.

Already the lure of the big-time show lights is beginning to undermine Carol’s long-held ideal … that marriage and a home of her own are her ultimate goal.

“I just don’t know now, I feel almost as strongly that if the opportunity comes to get higher up the ladder, well it’s just meant to be.”

Joy’s pick is that the opportunity is certain to come. The yells of delight, almost ecstasy, which greet all Carol’s numbers – most of them the latest Connie Francis songs – almost rival those for maestro Devlin.

Carol sings it straight, without gyrations in front of the mike, but does a cute wiggle which has the fans screaming as she steps back at the end of her number. 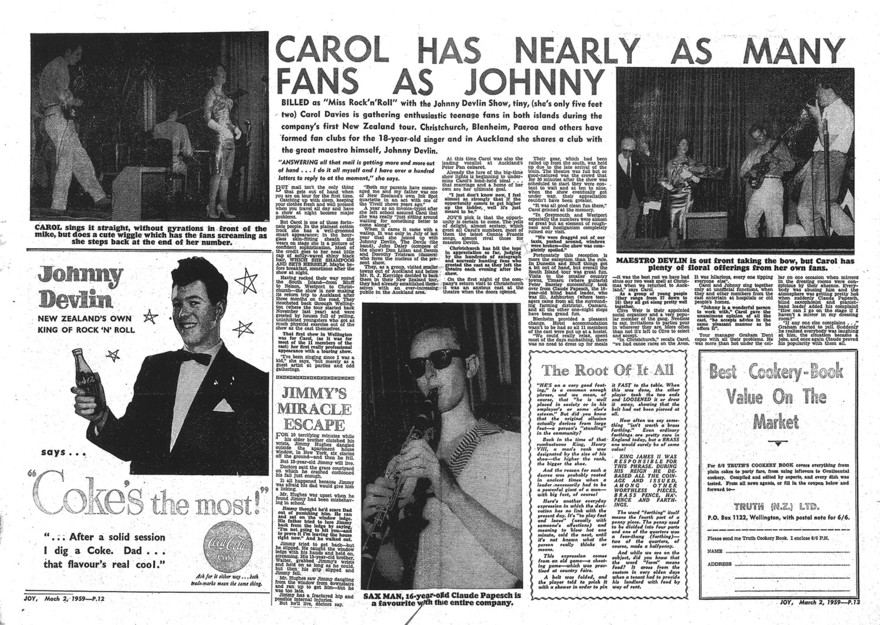 Christchurch has hit the tops in appreciation so far, judging by the hundreds of autograph and souvenir-hunting fans that greeted the cast as they left the theatre each evening after the show.

On the first night of the company’s return visit to Christchurch it was an anxious cast at the theatre when the doors opened.

Their gear, which had been railed up from the south, was held up due to the late arrival of the train. The theatre was full but so good-natured was the crowd that for 50 minutes after the show was scheduled to start they were content to wait and, at 10 to nine pm, when the show eventually got under way, their appreciation couldn’t have been greater.

“It was all good clean fun there,” Carol grinned at the memory.

“In Greymouth and Westport ... an element of roughness and hooliganism completely ruined our visit.”

“In Greymouth and Westport especially the numbers were almost as great but an element of roughness and hooliganism completely ruined our visit.

“We were dragged out of our taxis, pushed around, windows were broken – the show was completely spoiled.”

Fortunately this reception is more the exception than the rule. In Dunedin and Bluff things got a bit out of hand, but overall the South Island tour was great fun. Visits to the smaller country towns, Timaru (where guitarist Peter Bazely successfully took over from Claude Papesch, the 16-year-old blind band leader, who was ill), Ashburton (where teenagers came from all the surrounding farming districts), Oamaru, and all the other one-night stops have been grand fun.

Blenheim provided a pleasant change. Hotel accommodation wasn’t to be had so all 11 members of the cast were put up at a hostel.

“We could really relax, spent most of the days sunbathing, there was no need to dress up for meals – it was the best rest we have had since our two-week spell at Christmas when we returned to Auckland,” says Carol.

As a group of young people (they range from 27 down to 16) they all get along pretty well together.

Clive Weir is their appointed social organiser and a very popular member of the gang. Needless to say, invitations to parties pour in where ever they are. More often than not it’s left to Clive to select and accept.

“In Christchurch,” recalls Carol, “we had canoe races on the Avon. It was hilarious, everyone tipping everyone else.”

Carol and Johnny sing together only at unofficial functions, when they and other members from the cast entertain at hospitals or old people’s homes.

“Johnny is a wonderful person to work with,” Carol gave the unanimous opinion of all the cast. “He accepts advice in the same pleasant manner as he offers it.”

Tour manager Graham Dent copes with all their problems. He was more than hot under the collar on one occasion when mirrors in the dressing rooms were conspicuous by their absence. Everybody was abusing him and the atmosphere was getting pretty hot when suddenly Claude Papesch, blind saxophonist and pianist/band leader, added his complaint: “How can I go on the stage if I haven’t a mirror in my dressing room?”

“If anyone else complains …” Graham started to yell. Suddenly he realised everybody was laughing at him, the situation became a joke, and once again Claude proved his popularity with them all.