I tapped the cat on the shoulder.

“Don’t bug me, man, you’re saturatin’ my girocular,” he said.

I assumed he meant that anyone wearing a brown suit with 22-inch cuffs, as I was, would pollute his glorious ming-blue sportsjacket if they touched it, but I valiantly carried on.

“The band? Man, they’re the most. Anyone will tell you that, you just ask ’em.” And, with that as his final verdict, he and his partner rocked off to another part of the floor.

I approached several other jive addicts and “just asked ‘’em” what they thought of the band.

The wise words of one hepster summed up the feelings of the rest: “Dad, they’re the craziest – in fact ol’ Paris just drives me ‘inseine’!”

Surrounded by blue-jeans, duffle-coats and matadors, my faithful suit was becoming more and more embarrassed. But by this time my keenness to meet the leader of what I had gathered was the greatest “rock” band this side of the Southern Cross, was greater than the “square” feeling inside me.

So I squared my shoulder-pads and pushed my way through the bouncing crowd of teenagers who were packed into the Auckland Jive Centre Hall like sardines. And at the front of the hall, a kindly gent introduced me to the fabulous Bob Paris.

Bob’s considerate personality showed itself up immediately. Turning to one of the band members, he said, “Put on a couple of records, will you, Ian, I’ve got a visitor.”

He turned back to me. “The kids must have their music. They love to dance and we love to see them dancing."

And, with 1200 frantic teenagers rocking to Little Richard’s ‘Golly, Miss Molly’ in the background, Bob Paris – the leader of New Zealand’s most popular rock band – told me its story.

In a little over a year Bob’s band has enjoyed a meteoric rise to success. It began in November 1957, when he formed his first group – a quartet – which consisted of himself on the guitar, Bill Fairs, saxophone, Gene Blazer, bass, and Keith McMillan on drums.

After playing for three months at the Auckland Maori Community Centre, under Australian rock’n’roll champion Milton Mitchell, the band was signed by promoter Dave Dunningham (who took Johnny Devlin to stardom) to play at the Auckland Jive Centre and to accompany rock’n’roller Devlin at all his concerts.

At that stage pianist Bob Anderson and guitarist Ian Lowe joined the quartet and the Bob Paris Combo came into being.

Last June the band took part in Auckland’s first rock’n’roll jamboree, followed by two stage appearances at Auckland’s Majestic Theatre and appearances in several jamborees throughout the North Island during the last six months of 1958. 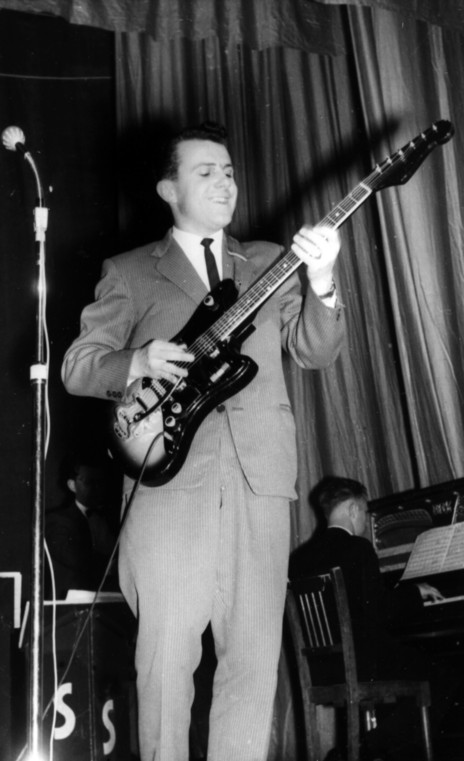 Although Johnny Devlin is now touring the country, three of New Zealand’s top rock vocalists will feature with the band. Two of them, Otto Wolfgramm and gorgeous 18-year-old “Desma”, have sung for some time. The other, Rotoruan rock’n’roller Trevor Coe, is a newcomer who – predicts his manager – will soon “out-Devlin Devlin”, which is quite a statement from the man who was responsible for putting Johnny on the road to fame.

The group recently released its first record, ‘Rebel Rouser’ and ‘Rumble’, a double hit which was an instant success, selling several thousand within three weeks of its initial release and appearing on the ZB Hit Parade, an achievement few New Zealand artists have attained.

An extended-play recording is to be released on Zodiac and will feature four songs, two of which – ‘Dragstrip’ and ‘Rock For Lionel’ – are Bob’s own compositions.

Bob also backs the Howard Morrison Quartet on its latest Zodiac extended-play release. He provides the backing with the Paul Lestre group.

About Bob himself? He was unwilling to talk about himself, but I managed to extract these facts from the other members of the band.

Bob’s main interest is in progressive jazz and he has a well-stocked collection of records by artists in this field.

Although he took a few lessons, he taught himself most of the tricks of the guitar trade. Night after night he would frequent various Auckland dance-halls and watch the different guitarists at work.

His first musical instrument was the steel guitar, but he soon dropped it in favour of the Spanish member of the family.

Better known as a guitarist, Bob’s real passion is for the vibes, which he began playing late in 1957.

Vibraphonists in New Zealand are few and far between, and out of necessity he taught himself to play, doing so in no uncertain manner. As an introduction to the vibes he took drum lessons, piano lessons and music theory – all important in connection with vibraphone playing. Today he ranks among New Zealand’s top vibraphonists.

Bob arranges all the band’s numbers, and much of the credit for its success must go to him. Although only 19, he must certainly rank as one of the most versatile figures in New Zealand music society, for he is a first-class guitarist, vibraphonist, composer, bandleader, musical arranger and a music teacher.

For the sake of New Zealand’s teenagers I hope that quiet-spoken, good-humoured Bob Paris and the wonderful bunch of boys that make up the rest of his band will continue to pound out the big beat for many years to come. 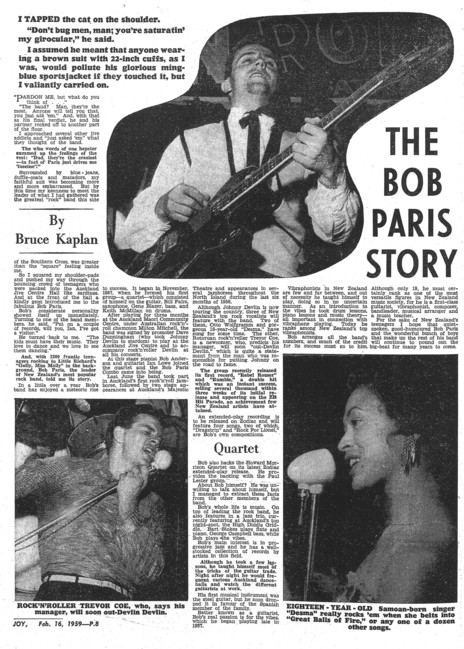