Looking back, the wild tales of drunken loutishness surrounding the Pretty Things 1965 New Zealand tour confirmed everything our parents told us about pop groups. Next to these five longhaired Brits, the Beatles and Stones sounded like goody-goods.

Except that the whole “controversy” was fake news, a stunt quietly cooked up between Bruce Kaplan and drummer Viv Prince, the bearded and drunken Pretty Thing in the leopard skin pillbox hat. Behind the scenes, the pair quietly orchestrated a “shock/horror/probe controversy” that ended up the front page of the unruly weekly read by half the population – and helped ensure the tour was a sellout.

Within hours of arriving at Whenuapai Airport, The Pretty Things ruffled feathers.

In my 2009 interview with Kaplan, he confessed how he and Prince engineered the publicity at the time. “We fed off each other,” he said. The collaboration resulted in the most controversial tour by an overseas band ever, the one by which all others are judged.

In August 1965, within hours of arriving at Whenuapai Airport, The Pretty Things ruffled feathers, telling journalists the country looked 25 years behind the times. Promoter James Haddleton encouraged the cockiness, one band member recalled: “He loved it, the fact that we were bad for New Zealand. He actually told us to be as outrageous as possible – for obvious reasons.”

Journalists responded by mocking the band’s shoulder-length hair, seen as feminine and, unthinkably, gay. The Evening Post captured their arrival in the capital with the headline: “Hair they are … And Sandie.” Kaplan recalled the growing hostility as the tour progressed: “It was as if the bubonic plague had arrived. People really were taken aback by their look.” 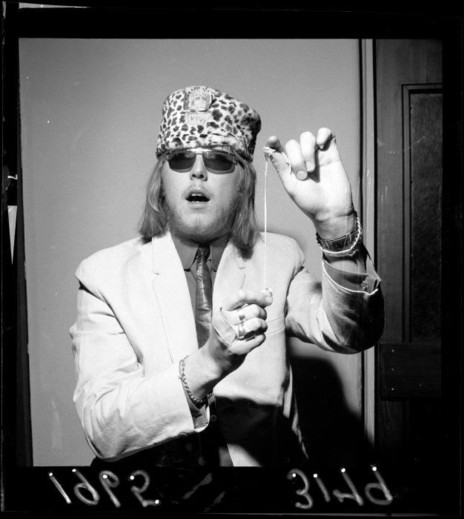 In a follow-up story – Those Pesky Things – Kaplan attacked the band’s behaviour during the South Island leg. “The drunken and dirty performers wrecked contents of hotel and motel rooms, disgusted their audiences and left several hotel managers considering legal action to make good the damage.”

Kaplan quoted Prince as denying that he was drunk onstage at New Plymouth. However, he said, this did not mean he disliked drinking because he surely did. “In fact, drinking plays an important part in my private life,” he confided to Kaplan, taking a swig from a half empty beer bottle. The time was 9.10am.

Prince was said to “bear a remarkable resemblance to a mobile garbage heap,” a description later picked up by the British pop press. He responded by ritually burning a copy of the paper with Kaplan’s story in it on the stage of the Auckland Top 20 nightclub.

On the final morning of the tour, Kaplan accompanied Prince out to the airport. He was on hand as the drummer was thrown off the aircraft before it departed. “I like it here,” he said. “I think I’ll miss the plane.” Within months, the group kicked him out.

The “bad boy” conspiracy of 1965 helped make the Pretty Things tour an indelible part of New Zealand pop history. And – with coverage of the chaotic tour appearing in the New Musical Express and Record Mirror – it’s probably not stretching it to say that Malcolm McLaren stole pages from the Kaplan/Prince rulebook to launch the Sex Pistols a decade later.